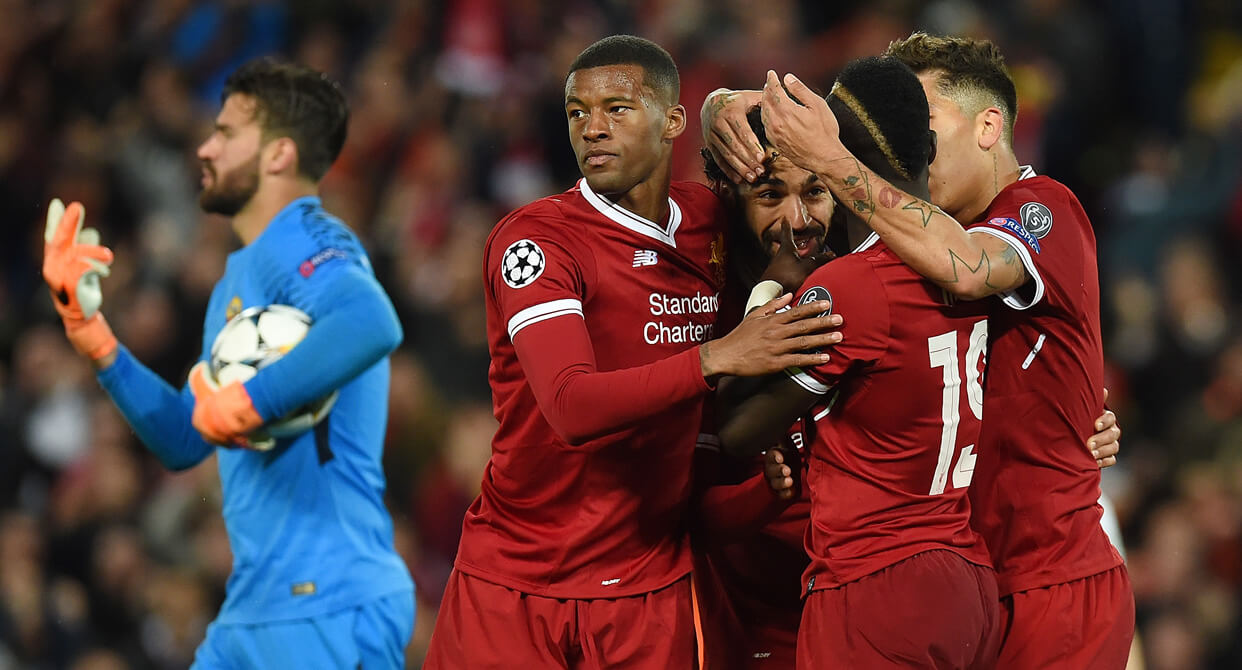 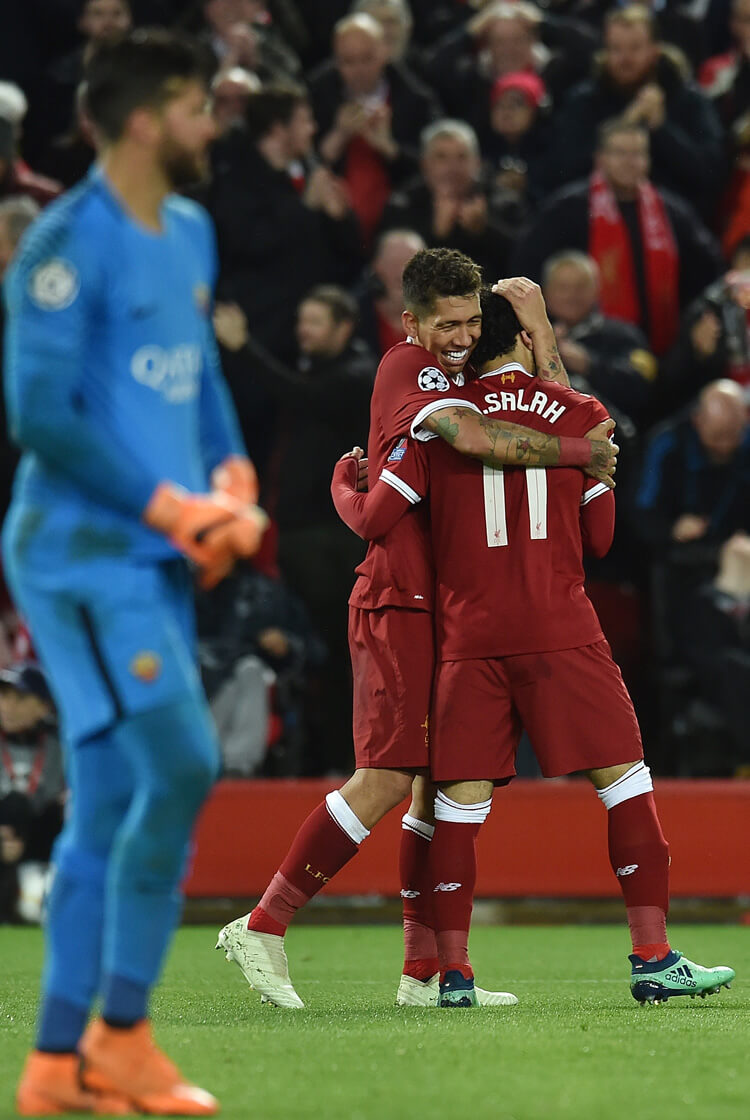 Liverpool scored five goals in little more than half an hour to take command of their Champions League semi final against Roma, but a lack of focus in the final few moments of the first leg saw the visitors grab two crucial away goals. Mo Salah ran the show at Anfield, scoring two and assisting two, with Sadio Mane and Roberto Firmino (twice) also getting on the scoresheet. It's been 11 years since Liverpool last reached the final, and finishes from Edin Dzeko and Diego Perotti mean there's still plenty of work to be done by Jurgen Klopp's team in the second leg at the Stadio Olimpico. Here, our professional coaches analyse the tactics and key moments from a pulsating encounter on Merseyside. 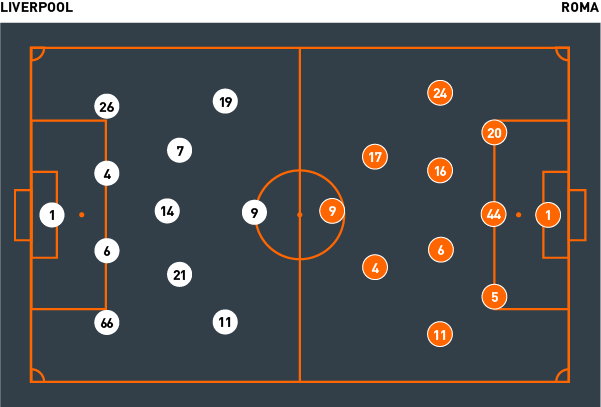 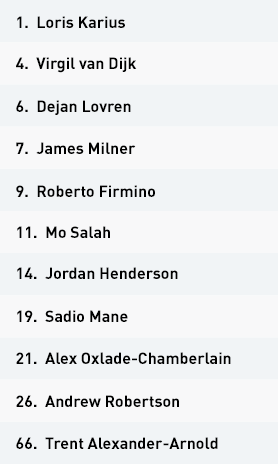 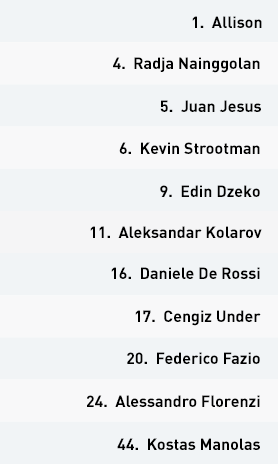 Despite a ferocious Anfield atmosphere, Liverpool, who set up in a 4-3-3 with Sadio Mane, Roberto Firmino and Mo Salah leading the attacking line, initially struggled to impose themselves on the game. Roma started with more effective possession, while Liverpool’s energetic press against their back line did little to spoil their opponents' rhythm.

But as Roma set up with an extremely high defensive line, Liverpool threatened during attacking transitions. Long balls over the top of Roma’s back line proved effective, whether deep defensive clearances or lofted passes after a long sequence of possession. Mane and Salah charged in behind repeatedly, forcing Alisson in the Roma goal into action. Mane in particular squandered two great chances, before Salah opened the scoring with a superb curling effort into the top corner after cutting inside on to his stronger left foot.

Liverpool had their first effective spell in the game after taking the lead and grabbed another goal just before half-time. Roma's high line was again exploited with a simple clearance from deep. Firmino and Salah combined well, with the Egyptian driving forward to delicately chip the ball over Alisson.

With Eusebio Di Francesco shifting to two strikers for the second half, space opened up in midfield for Liverpool, as Roma’s central midfielders couldn't defend the vast width of the pitch. Milner also stepped on to De Rossi, who lost the ability to dictate in possession from deep.

The home side played a series of effective forward passes, splitting Roma’s midfield with ease. More long balls in behind caused carnage, as Liverpool scored their third and fourth goals through Mane and Firmino, both tapping home after almost identical low crosses from Salah. The tie then looked completely over when Firmino headed in a fifth from a routine corner.

As Roma changed their structure for a third time in the game, matching Liverpool’s 4-3-3 shape, the home side lost momentum and control of the midfield areas. Within four late minutes, Liverpool’s lead was cut from five to three. Roma grabbed two late goals and created further chances for a possible third.

While it was a convincing attacking display from Liverpool, they’ll be disappointed that a drop in focus spoiled the clean sheet they could have taken to the Stadio Olimpico. They’re still in control, but will be wary of their opponents’ comeback over Barcelona in the previous round.

Roma began in a 3-4-2-1 shape, with Radja Nainggolan and Cengiz Under supporting lone striker Edin Dzeko. Eusebio Di Francesco also stuck with the defensive back three that had been so successful in their dramatic home victory over Barcelona in the previous round.

Roma started the game well, dominating the majority of possession. Wing-backs Alessandro Florenzi and Aleksandar Kolarov provided maximum width in attack and, when required, converted into a defensive back five.

Daniele De Rossi found ample space centrally to receive from the back. Nainggolan and Dzeko dropped deeper into areas occupied by Liverpool’s central midfield trio, and with Kevin Strootman also supporting the build centrally, De Rossi was unmarked and acted as their free player in a four-against-three overload.

With this central domination, Liverpool’s high-pressing forwards were ineffective, and Roma could utilise the width provided by both wing-backs in building attacks. Their downfall, however, came out of possession, as their high defensive line provided Liverpool the perfect spaces in which to transition. The advanced positioning of their wing-backs left the back line in a three-versus-three scenario against Liverpool’s direct and clinical front line.

Any subsequent clearance or long ball caused mayhem in the Roma defence, and they gifted Liverpool chance after chance – which the hosts duly lapped up. Despite dominating early proceedings, they went in two goals down at half-time.

Di Francesco reacted by changing the system to a 3-5-2. While this provided more attacking options, as they now played with two central strikers, it reduced the defensive strength and protection in midfield. Nainggolan, Strootman and De Rossi could no longer provide effective cover to the back three.

Liverpool continued to attack with simple long balls in behind, and Salah capitalised most, driving down the Roma left to set up two more goals for Mane and Firmino. A shaken Roma defence then failed to defend a routine corner, allowing Firmino to head home a fifth goal.

Di Francesco changed into a third structure – a more familiar 4-3-3. This gave Roma more control of the game, as they matched Liverpool man for man. With a late surge of energy, and some complacency from Liverpool, Dzeko smashed home following a trademark through ball from Nainggolan. Soon after, Diego Perotti calmly powered home a penalty, as James Milner had been adjudged to have handled Nainggolan’s shot inside the penalty area.

With Liverpool goalkeeper Loris Karius forced into making additional late saves, Roma will have been buoyed by their end to the first leg. Having scored two away goals and with similar requirements to their win over Barcelona in the previous round needed, they’ll still believe they can make it to Kiev for the final.

The main key battle involved Roma’s central structure when in possession. During the early moments of the first half, dropping movements from Radja Nainggolan and Edin Dzeko overloaded Liverpool’s central midfielders. This created a four-versus-three overload, which enabled Daniele De Rossi to receive from the back line unmarked and unchallenged.

De Rossi, from here, could spread the play to the wing-backs or drive forward centrally. Roma looked dangerous from this, creating decent chances, with Kolarov striking against the crossbar. They lost this advantage quickly, however, as Liverpool punished their high defensive back line with effective balls over the top. As Liverpool gained confidence, Roma lost theirs and struggled to make accurate passes into midfield.

In the second half, James Milner stepped higher out of possession to mark De Rossi. This forced Roma and goalkeeper Alisson in particulate to build with direct and longer passes. Possession was gifted back to Liverpool as a result, which they used to attack in behind against Roma’s high defensive back line.

It looked game over for Roma at 5-0, but a second change in structure from Eusebio Di Francesco saw the away side effectively match Liverpool man for man in a 4-3-3 system. With this, they gained some momentum and capitalised on complacency from Liverpool to score what could be two vital away goals.