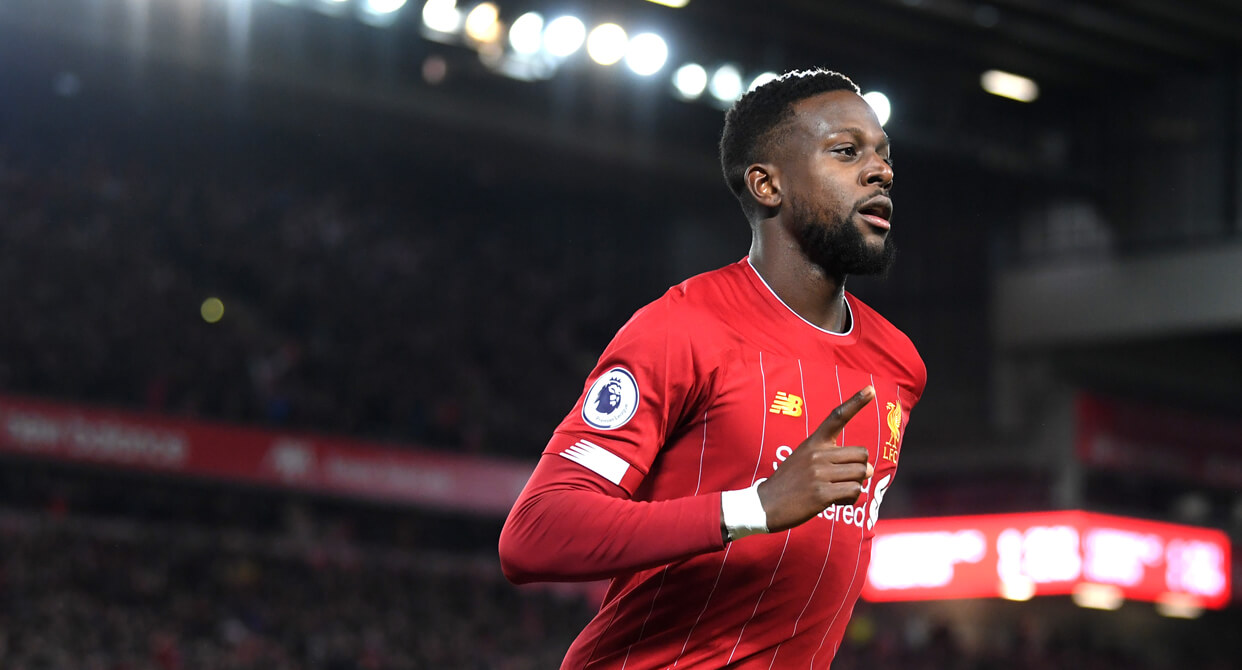 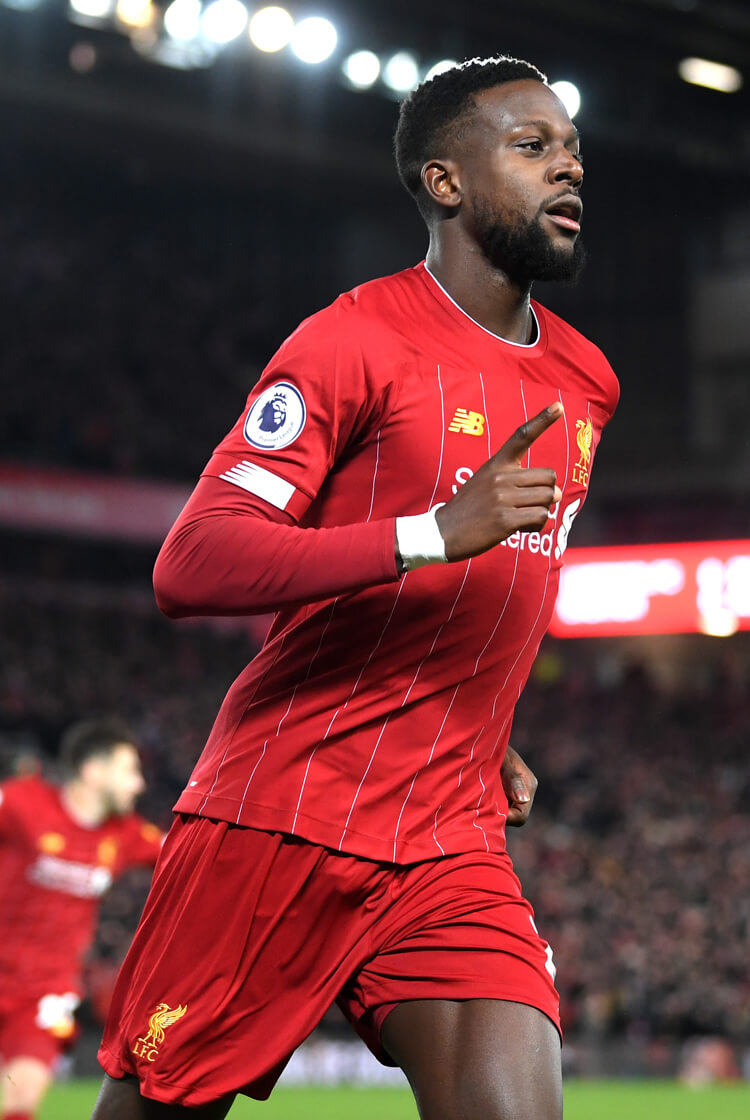 Liverpool scored five goals in a Merseyside derby for the first time in 37 years, as they racked up league win number 14 from 15 games against an Everton team whose manager Marco Silva looked a dead man walking throughout. Jurgen Klopp shuffled his pack by leaving Roberto Firmino, Mo Salah and Jordan Henderson on the bench, but Sadio Mané did start – and the Senegalese attacker ran riot in a first half in which he created goals for Divock Origi and Xherdan Shaqiri before adding one for himself. Origi scored a second from a Dejan Lovren through ball, with goals from Michael Keane and Richarlison contributing to an eventful six-goal first half. The second period proved quieter, with a touch of Firmino magic creating the Reds' fifth for Georginio Wijnaldum with full-time looming. 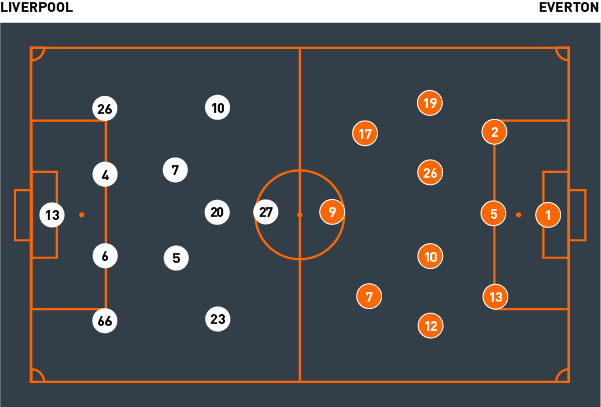 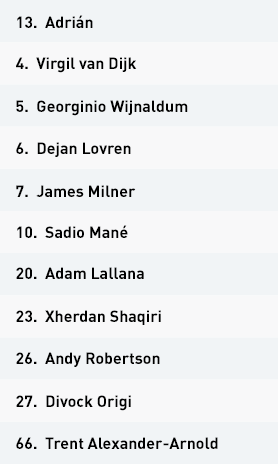 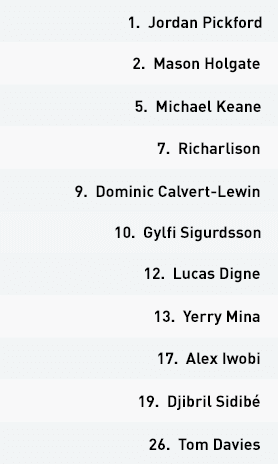 Jurgen Klopp swapped his hand for the midweek Merseyside derby, setting his team up in a 4-2-3-1 formation that featured Xherdan Shaqiri, Adam Lallana and Sadio Mané as an attacking trio behind central forward Divock Origi.

Visitors Everton set up in a 5-4-1 defensive shape and were happy to concede possession, allowing Liverpool centre-backs Dejan Lovren and Virgil Van Dijk to have the ball and dictate the build-up. There were some fundamental flaws in their approach, however, particularly with their commitment to keeping a high line. Lone forward Dominic Calvert-Lewin struggled to close down both centre-backs as they moved further apart, meaning they were able to retain possession too easily. With that in mind, the Everton defence failed to drop until the centre-back on the ball made contact, which left the space in behind unprotected against quality driven balls from deep. To add to their problems, goalkeeper Jordan Pickford’s starting position rendered him unable to sweep such balls us, leaving the Liverpool forward even more space to run into.

The home attackers looked to make their runs from out to in, running across the Everton wing-backs and in behind the Everton centre-backs, who were unsure whether to step up and play offside or drop and track the runners – frailties that were all too evident as Mané played in first Origi and then Shaqiri within the first 20 minutes.


In a bid to solve his team’s problems, Marco Silva switched to a 4-2-3-1 formation in possession and 4-4-2 out of possession, replacing wing-back Djibril Sidibe with wide attacker Bernard to create a defensive line of four. The switch was designed to allow Everton to press with two on the front line, and restrict the time the Liverpool centre-backs had on the ball. Bernard and Alex Iwobi were to press the full-backs when defending the initial phase of Liverpool’s build-up, but the hosts could then look to exploit the 3v2 overload they had in central midfield, with Lallana often the free man in behind Tom Davies and Gylfi Sigurdsson.

Liverpool often used their wide forwards to drop towards the ball when their centre-backs or full backs had possession, and then set for Lallana to continue the attack. They also now looked for longer switches out wide, with Everton’s back four providing less coverage of the width of the pitch.

The hosts also demonstrated alertness in transitional moments. Mané in particular was a constant menace in behind; had he been more clinical, he could easily have added even more goals to the Liverpool total.

Everton initially set up in a 3-4-3 formation in possession, with Djibril Sidibe, Tom Davies, Gylfi Sigurdsson and Lucas Digne as a four across the midfield, and Alex Iwobi and Richarlison pushing up to play alongside Dominic Calvert-Lewin.

Although Everton looked as though they wanted to build from deep, they tended to play long when they came under pressure from Liverpool’s front line – usually made up of Divock Origi and Adam Lallana in a defensive 4-4-2. They generally looked for Calvert-Lewin in the air, but the forward had very limited success against Virgil van Dijk and Dejan Lovren.

The vistors also tried to use wing-backs Sidibe and Digne to create wide overloads against the Liverpool full-backs, but they struggled to move the ball well enough in Liverpool’s half and instead looked vulnerable themselves in the transition that followed. Only when they released Calvert-Lewin in behind early in transition did they ever carry any threat at all.

After head coach Marco Silva switched to a 4-2-3-1 shape in possession, Everton looked to use Tom Davies as the deeper central midfielder, while Gylfi Sigurdsson pushed further up to support the attack in what almost resembled a lopsided 4-1-4-1. The presence of Sigurdsson in a more advanced role allowed Richarlison to play as a second striker alongside Calvert-Lewin, increasing the threat in behind and opening up spaces in wide areas for substitute Bernard and Iwobi.

The role of Sigurdsson was to support underneath the ball as Everton played to their attackers, providing a forward-facing option who could dictate the attack from advanced areas. These changes in roles after the formation switch were evident in Richarlison’s goal on the stroke of half-time.

Much of Liverpool’s defending came in the form of applying intensity as often as possible to force mistakes rather than deploying an organised press to regain possession in certain areas. The hosts were confident that forcing Everton into long balls was going to be sufficient to create a turnover, thus limiting the amount of energy their midfielders in particular had to expend as part of an organised press.