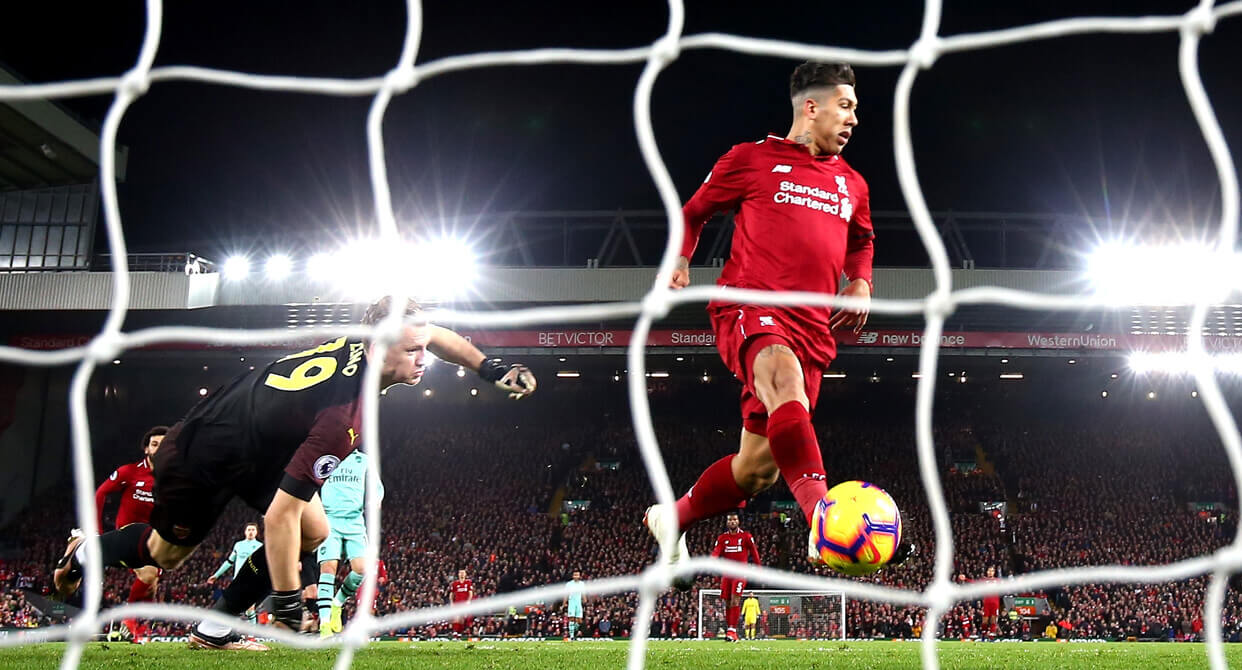 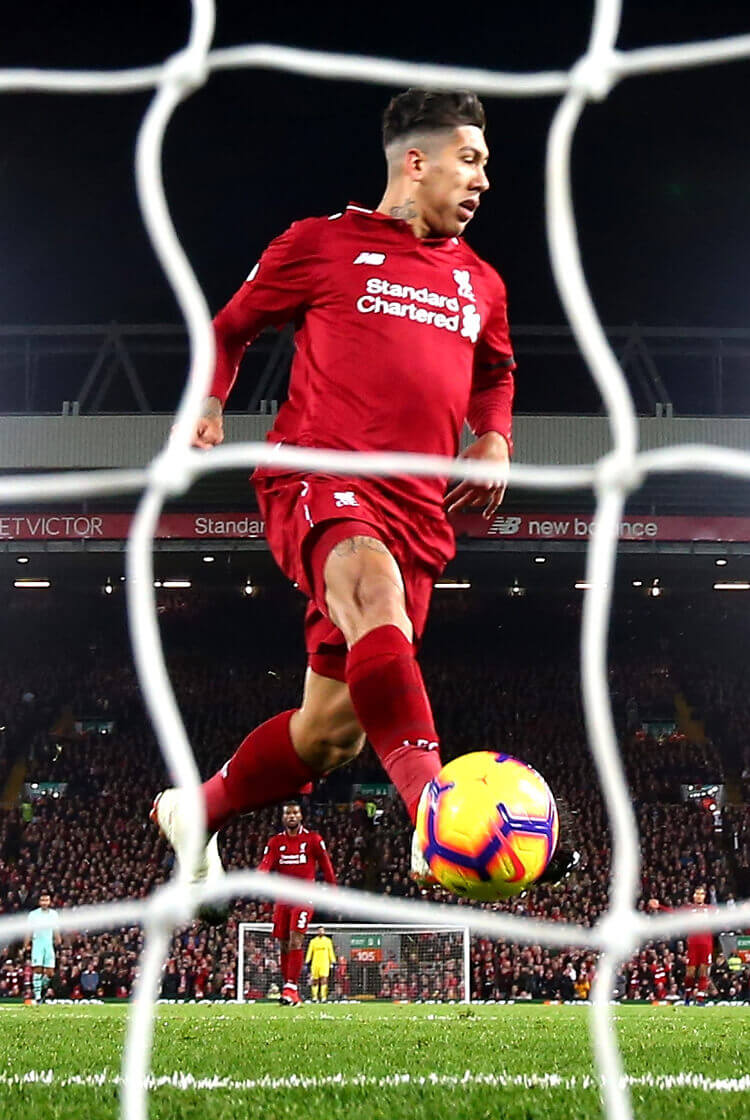 Liverpool maintained their scorching pace at the top of the Premier League with a dismissive home thrashing of an Arsenal team looking desperately fragile in defence. Jurgen Klopp’s side looked like they might face a sterner test than many expected when Ainsley Maitland-Niles pounced at the far post to sidefoot the visitors ahead after only 11 minutes – but within five minutes the Reds had turned things around. Roberto Firmino scored twice in three minutes – the first a trademark no-look finish after the Arsenal defence gifted him an open goal – and from there on Liverpool were in total control. Mo Salah grabbed a superb assist for Sadio Mane just past the half-hour mark, and then the Egyptian grabbed one for himself from the penalty spot after drawing a foul from Sokratis on the stroke of half-time. Firmino completed his hat-trick midway through the second half, slotting home another penalty after Sead Kolasinac pushed Dejan Lovren over in the Arsenal area. Liverpool head into a massive game at the Etihad seven points clear of Manchester City, while Arsenal start the new year in fifth. 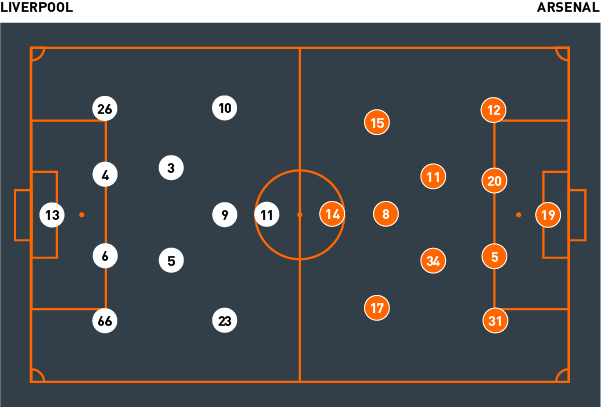 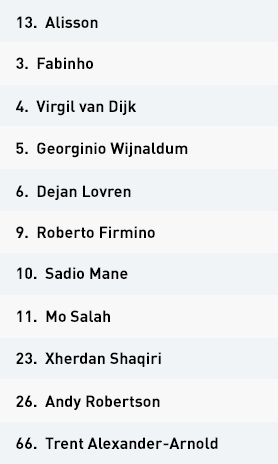 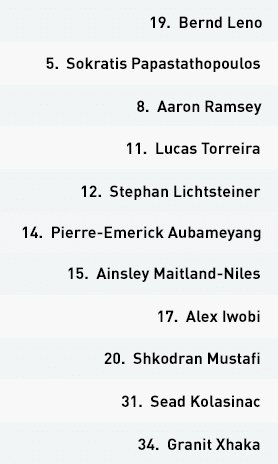 The hosts looked to try to draw Arsenal into the centre of the pitch before then looking to exploit the wide areas. They often made this possible by dropping one of their three attacking midfielders deeper, in among Arsenal’s second defensive line; they could then receive into feet, attracting players on each side, which would create space outside for the home side’s advancing full-backs.

The Reds targeted their right side more, where they would often play passes between Sokratis and Sead Kolasinac for the runs of Salah. This would have the Egyptian running away from goal in the first instance, but he would take the centre-back with him. This then opened up a route for him to receive and then run back towards goal, as for the penalty he won and converted himself just before half-time – or it would open up space for a run from deep from Shaqiri, Firmino or even right-back Trent Alexander-Arnold.

With Mane, Firmino and Shaqiri often playing on different lines to Salah, the Liverpool attack could use quick combination play around the box to pull the Arsenal defensive unit on to different lines. The hosts tried to exploit this as much as possible; with a higher level of finishing, they would have added to their already impressive goal tally.

Out of possession, the Reds initially pressed high. Mane looked to close down Shkodran Mustafi while screening the pass to Stephan Lichtsteiner; Firmino positioned himself between Granit Xhaka and Lucas Torreira, but moved towards whoever was closest to the ball; Salah would be the other side of Torreira, effectively joining Firmino in a two-on-two but also ready to press Sokratis should Arsenal switch the ball; Shaqiri, finally, would help to press Sokratis while screening the ball into Kolasinac.

Later in the game, with the points safe, Liverpool switched to a 4-4-2 mid-block and looked to conserve energy. Firmino and Salah would form the top line, while Mane and Shaqiri tucked in alongside Fabinho and Wijnaldum. The three midfielders nearest the ball would stay close to each other to prevent any penetration – this meant moving across quickly when Arsenal looked to switch play, which was easier to manage when the fresher Jordan Henderson and Adam Lallana were introduced in the second half.

The Reds also then used a 4-1-4-1 shape, with Fabinho in between the lines to nullify the threat of any Arsenal players receiving in these areas. Firmino moved to left midfield and Shaqiri stayed on the right, while Henderson and Lallana played centrally. Salah stayed high on the Arsenal defensive line and looked to provide a counter-attacking threat once Liverpool regained possession, but in truth the hosts rarely looked threatened in a second half they managed intelligently ahead of Thursday’s huge visit to Manchester City.

Unai Emery set his Arsenal team up in a 4-2-3-1 formation in possession, with Granit Xhaka and Lucas Torreira sitting deep in midfield while Ainsley Maitland-Niles, Aaron Ramsey and Alex Iwobi supported Pierre-Emerick Aubameyang in attack. The visitors created very little, however, and only registered three shots on target over the course of the 90 minutes.

The Gunners tried to utilise the half-spaces and wide areas where possible. Maitland-Niles and Iwobi would operate outside Liverpool’s sitting midfielders and looked to combine with full-backs Stephan Lichtsteiner and Sead Kolasinac to try and create two-on-ones against the Liverpool full-backs. Torreira and Xhaka provided a box of security with centre-backs Shkodran Mustafi and Sokratis, which allowed the full-backs to push on. Despite Iwobi, Ramsey and Maitland-Niles moving between the lines, Arsenal were rarely able to create anything from these situations – it was only when Alexandre Lacazette came on for Aubameyang, and started moving towards the ball to help link the play, that Arsenal were slightly more threatening.

Ramsey and Iwobi offered some rotation to try to disorganise the Liverpool defence, where Ramsey would drift wide and Iwobi would make a penetrative run inside, but this approach was infrequent and caused a rapidly recovering Liverpool defence few problems. When Liverpool formed their mid-block later in the game, Arsenal had a large amount of possession – but it was largely circulated between their back four. They would sometimes play into the feet of Xhaka, Torreira or one of the attacking midfielders, but they could only receive with their back to goal and send it backwards. Rarely did the Gunners penetrate beyond the move that led to the opening goal of the game.

Out of possession, Arsenal pressed in a 4-4-2 shape. Ramsey joined Aubameyang on the top line, while Iwobi and Maitland-Niles joined Torreira and Xhaka in a midfield four. The visitors tried to press high up the pitch and with aggression: Ramsey pressed Virgil van Dijk when he had possession, while Aubameyang would drop on to Fabinho; Iwobi pushed on to Dejan Lovren but also tried to affect Trent Alexander-Arnold, while Maitland-Niles would try to deal with Andy Robertson on the Liverpool left.

Xhaka and Torreira tried to be on the front foot centrally, and back up the press should Aubameyang, Ramsey or Iwobi jump to press Alisson in the Liverpool goal and so leave their man free. The two central midfielders also looked to track the dropping runs of Xherdan Shaqiri, Sadio Mane and Roberto Firmino, but they often found themselves overloaded.

When Arsenal chose not to press – mostly when the Liverpool centre-backs had good possession – they would fall back into a 4-4-2 mid-block and try to show the Reds wide. The whole midfield drifted across to whichever side the ball was on, more concerned with cutting off passing lanes back inside and preventing penetration than actively regaining possession through pressing. This really didn’t work enough, however, as Liverpool too often penetrated on their way to a comfortable victory that underlined the work Emery still has to do with his new team.