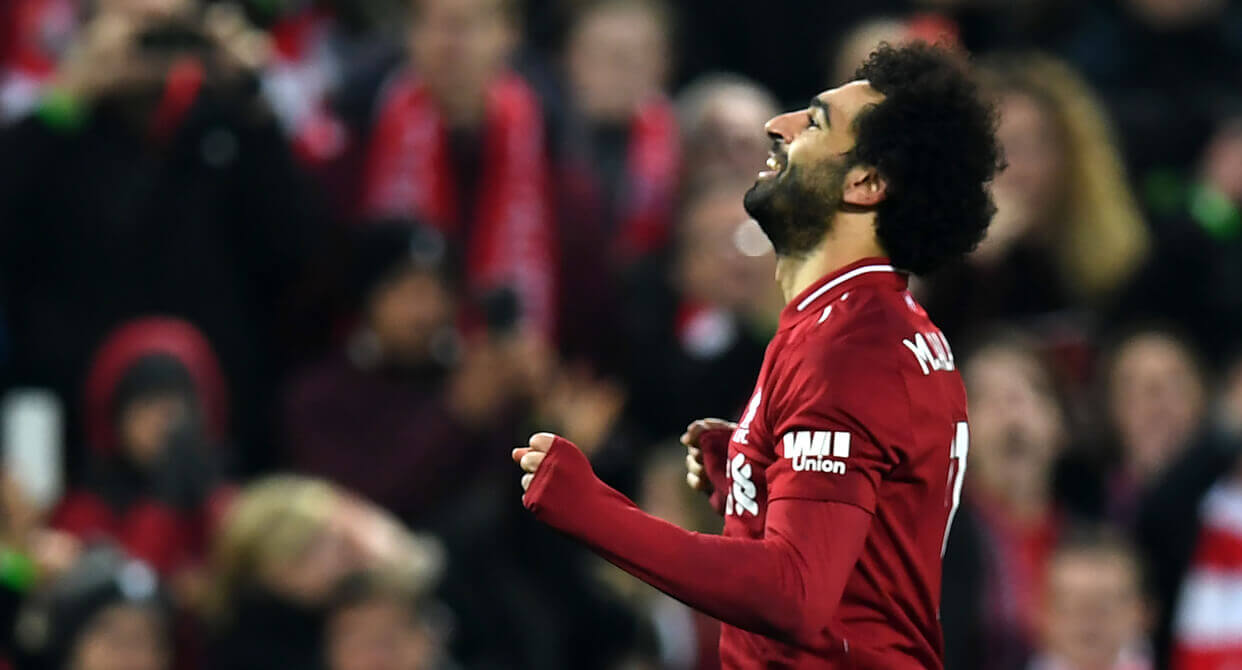 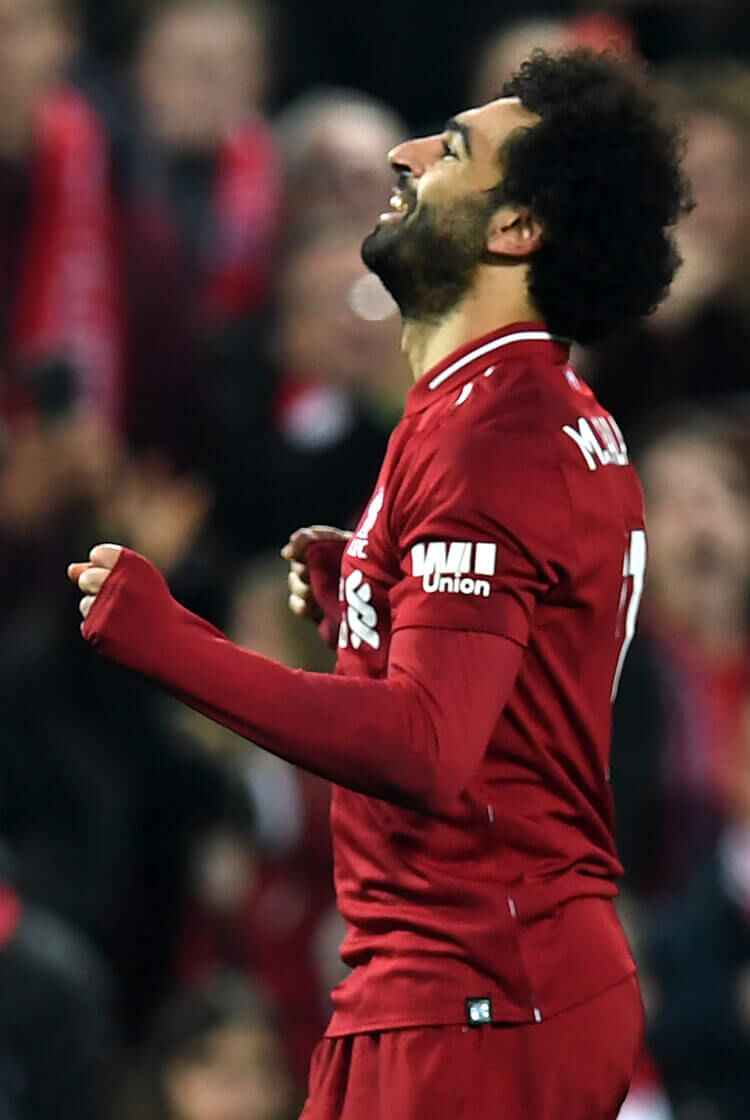 Liverpool reached the halfway point of the Premier League season with a six-point lead at the top after breezing past Newcastle United at Anfield. Jurgen Klopp’s men weren’t at their sparkling best against a Rafa Benitez team sent out to contain, but they still took an early lead through the unlikely figure of Dejan Lovren, who hammered home the loose ball from an 11th-minute corner. It took until the second half for the Reds to secure the points, with Mo Salah scoring their second from the penalty spot after himself winning a very soft penalty. Late strikes from Xherdan Shaqiri and substitute Fabinho – his first for the club – perhaps flattered the hosts, but Klopp and co won’t much mind. Bigger games await Newcastle, who start the second half of their campaign five points clear of the relegation zone. 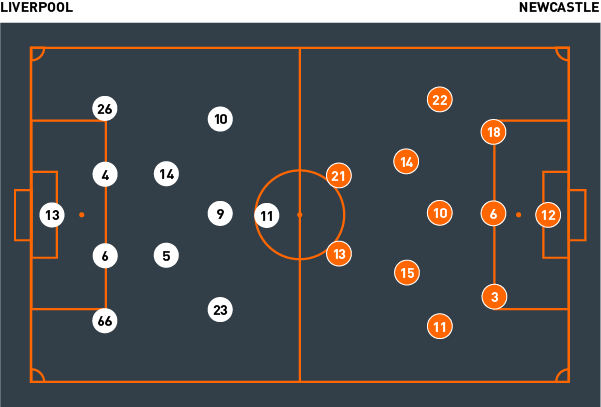 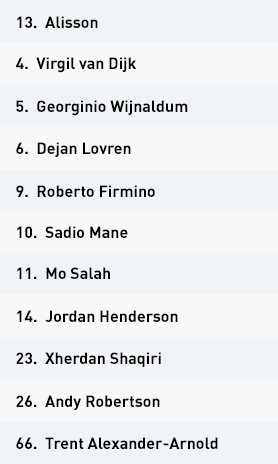 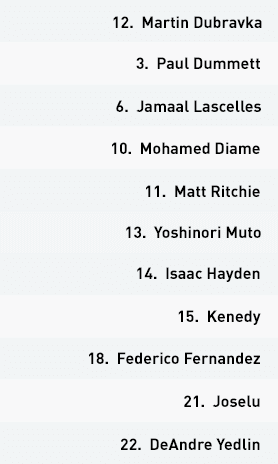 The home side took a while to settle into a consistent attacking rhythm, as the visitors managed to get into their defensive third via the wide areas. However, there was a clear sense that patience with the ball, coupled with the ability to recognise when to change the tempo in the final third, would eventually work in their favour.

Full-backs Trent Alexander-Arnold and Andy Robertson initially provided Liverpool’s attacking width, which allowed Mane and Shaqiri to drift inside. However, up against a well-organised back five, the Reds needed to find more effective ways of penetrating. Dropping the full-backs deeper than usual gave the visitors’ central midfielders more to worry about – as they were drawn to Robertson and Alexander-Arnold, Liverpool’s double pivot of Henderson and Wijnaldum were afforded more time and space to find passes into their forward line. With Shaqiri in particular operating in the central lane, Salah was able to offer curved runs in behind – the Egyptian’s movements toward the right inside channel worked to push Newcastle’s defence back and give his attacking teammates more space to receive.

As the first half progressed, and with Liverpool now ahead, the visitors dropped into a lower defensive block. Space in the attacking third became congested, at which point the full-backs moved higher once more – while Henderson and Wijnaldum sat deeper to screen access into the two strikers Newcastle tried to leave up throughout.

In the second half, Liverpool’s attacking play came from winning the ball high in Newcastle’s half. The visitors twice changed their style, first to a more direct approach and then into an expansive short build from the goalkeeper. But the intensity of press from Mane, Firmino, Salah and Shaqiri resulted in much higher possession for Liverpool – perhaps the only surprise is that none of their three second-half goals came directly from one of the many high regains.

Liverpool’s dominance on the ball – they registered 72 per cent of possession – meant they were rarely in their defensive shape. When they were, they aggressively counter-pressed from within their 4-2-3-1, with Henderson and Wijnaldum central to their defensive transition. The pair were excellent at delaying Newcastle’s attacks, especially as the visitors had three central midfielders and left two strikers high throughout. With the support and tireless running of Firmino ahead of them, Liverpool frequently regained possession in the central lane.

The hosts found it more difficult when the visitors quickly switched play across their back line of five. Firmino couldn’t step forward to help the press, as this would have left Henderson and Wijnaldum more exposed to Newcastle’s central players. Instead, Liverpool accepted play in the wide areas – and, with the exception of one early chance, the hosts’ defence remained otherwise comfortable.

During moments of transition, the Magpies would try to attack the central lane – but Virgil van Dijk was immense at intercepting forward passes into the front line, ensuring that Newcastle failed to progress while reasserting his own team’s dominance in possession.

With Newcastle going more direct in the second half, Liverpool’s central defence had to deal with more early balls forward – but both van Dijk and goalscorer Dejan Lovren were consistently dominant in the air. When the visitors then shifted to a deeper build, the Reds’ front line pressed with intensity and intelligence against a back three helped only by lone pivot Mohamed Diame. They blocked off access into the more advanced midfielders and repeatedly won possession high as Liverpool eased to yet another clean sheet.

Rafa Benitez set his Newcastle team up in a 3-5-2 formation in possession. In order to avoid Liverpool’s intense counter-press, the visitors would look to switch the ball to either wing-back, Matt Ritchie or DeAndre Yedlin, who then provided instant attacking crosses. They always had two central strikers to attack crosses against Liverpool’s centre-backs, with Joselu’s early header at the far post their best chance of the entire game.

Newcastle changed their approach during moments of transition, as they left their striking duo of Joselu and Yoshinori Muto high and central. They tried to pass into the feet of the two forwards whenever possible, hoping to bypass any form of counter-press, but the strikers lacked the strength needed to secure these passes against the towering Virgil van Dijk. The absence of Salomon Rondon, perhaps saved for more winnable fixtures in Newcastle’s season, was keenly felt.

After conceding a second goal early in the second half, Newcastle went more direct. They aimed to hit the closest of the two forwards, relying on flick-ons and knockdowns for the second – but this proved unsuccessful against Liverpool’s powerful centre-backs. A brief spell of expansive build-up play from goalkeeper Martin Dubravka saw them shift into a 3-1-4-2 structure, with Kenedy and Isaac Hayden pushed very high alongside both wing-backs. They lacked the quality to split Liverpool’s lines, however, with the back three and lone pivot Mohamed Diame consistently pressured into mistakes.

Out of possession, Newcastle immediately retreated into a mid-block, with both wing-backs working back into what became a compact 5-3-2. They focused on reducing the spaces between their lines, rather than remaining compact horizontally.

The mid-block proved to be an effective set-up, but having fallen behind the Magpies’ central midfielders increased their press and were more easily dragged out of their compact shape. With Liverpool now finding increased space between the Newcastle lines, the visitors retreated into a low block in a bid to close down these spaces and see out the first half without any further damage.

Conceding so early in the second half effectively killed any chance the visitors had of getting back into the match. Their tactical changes in attack probably caused their own defence more problems than Liverpool’s, with a consistent low block failing to keep out the two late strikes that condemned them to a 4-0 defeat that did their goal difference no good at all.