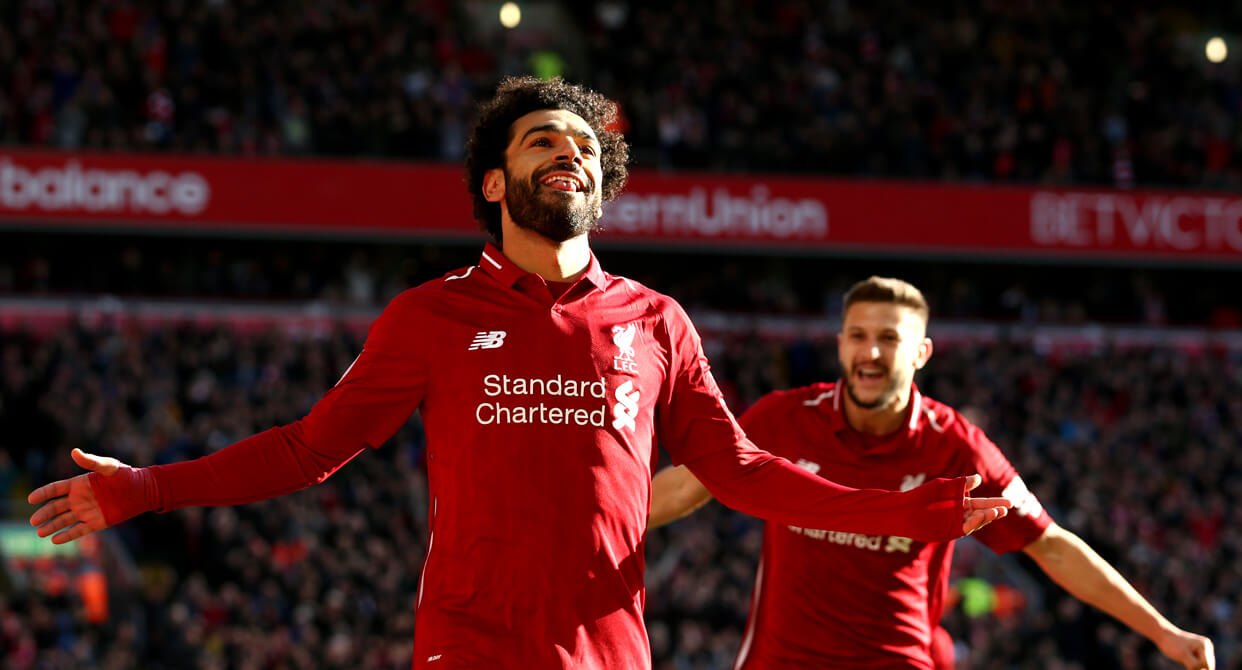 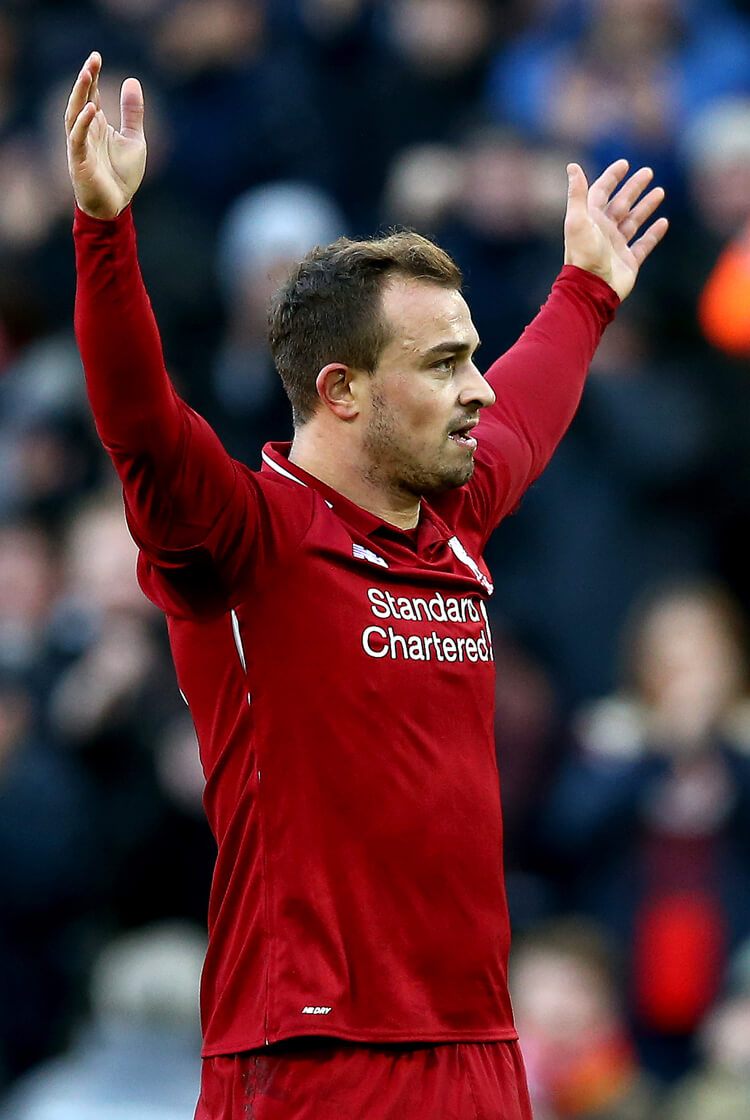 Mo Salah, Sadio Mane (twice) and Xherdan Shaqiri all got on the scoresheet at Anfield, as Liverpool inflicted a seventh Premier League defeat on Cardiff City. Salah scored inside the opening 10 minutes to get the ball rolling, with Mane adding a second midway through the second half. Cardiff did grab one back through Callum Paterson, but his opportunistic effort counted for little once Shaqiri and Mane added the home side’s third and fourth in the final 10 minutes. The result saw Jurgen Klopp and his players move ahead of Manchester City into top spot before the champions’ Monday night fixture away at Tottenham. 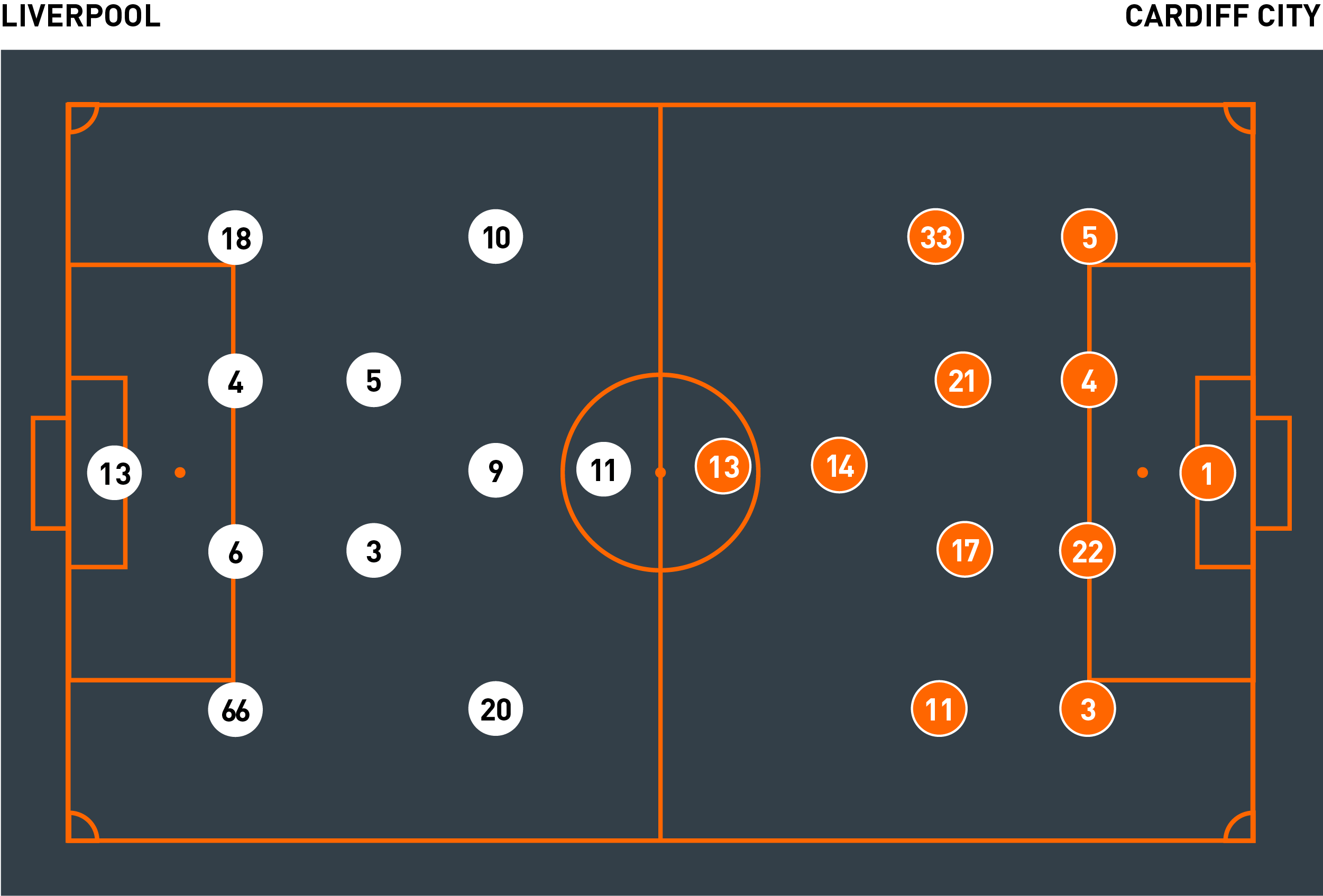 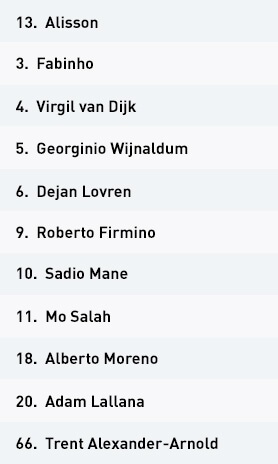 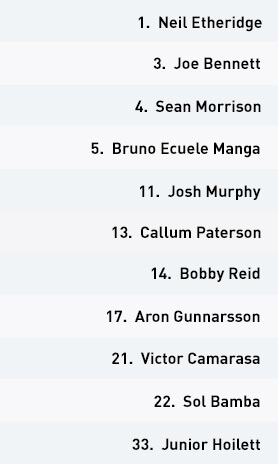 Jurgen Klopp made six changes from his side’s previous Premier League outing at Huddersfield, with Trent Alexander-Arnold and Alberto Moreno replacing Joe Gomez and Andy Robertson in the full-back positions. The head coach also converted his team into to a 4-2-3-1, as Fabinho and Georginio Wijnaldum formed a double pivot. Roberto Firmino and Sadio Mane also returned to the starting line-up, joining Adam Lallana in an attacking midfield trio behind Mo Salah.

The hosts predictably dominated the opening proceedings, with Fabinho and Wijnaldum forming a central box as the double pivot, allowing for a consistent build from goalkeeper Alisson. Along with centre-backs Dejan Lovren and Virgil van Dijk, the central box ensured constant progression into midfield, as Cardiff’s two pressing centre forwards could do little in a four-on-two overload.

Quick switches across the pitch, coupled with punched passes forwards into the full-backs, ensured Liverpool could quickly play around Cardiff’s narrow defensive structure. This brought immediate success, as the visitors failed to clear a cross from Alexander-Arnold; despite them blocking two subsequent attempts on goal, Mo Salah pounced to put Liverpool ahead inside 10 minutes.

It was clear that Salah was playing as the central number 9, with Firmino dropping short as the number 10 between the Cardiff midfield and defensive units. Should Firmino move in front of the visitors’ midfield to create a trio with Fabinho and Wijnaldum, Mane and Lallana would step inside to form a narrow front three. This afforded Alexander-Arnold much more space to move forward and provide attacking crosses from right-back. Despite setting up in a 4-2-3-1 featuring various rotations and subtle movements, the Reds often ended up in an asymmetrical 4-3-3, with Moreno on the left more reserved than Alexander-Arnold.

They displayed great fluidity with their movements in the first half, too. Salah would drop away from the number 9 role and move into a central midfield position, sometimes in tandem with Firmino. Lallana would then take up the centre forward position, while Alexander-Arnold would provide the width. Such rotations required well-timed movement – the choreography of the run should match the angle of the ball to maintain the forward passing options – but Liverpool were impressive in this regard.

At the start of the second half, however, they failed to progress the ball from back to front quite as quickly as they had in the first. The now deeper positioning of Alexander-Arnold when building from goalkeeper Alisson disrupted the rhythm, as Cardiff stepped higher in their mid-block. The visitors simply blocked off any forward passes, and the lack of width from the back line made switches around a narrow structure much more difficult.

The Reds looked far less dangerous in possession, but the second goal still arrived courtesy of a Mane piledriver from the left. Minutes later, James Milner replaced Firmino and Liverpool converted into a more structured 4-3-3. Both full-backs now stepped higher, which in turn restored their control of the ball against a team who recovered into a low block. A low finish from substitute Xherdan Shaqiri and a deft chip from Mane confirmed the three points in the latter stages of the contest, as Liverpool maintained their superb start to the season.

Due to their dominance of the ball, Liverpool’s defensive duties were fairly limited throughout. Even during moments of transition where Cardiff’s long balls managed to avoid the hosts’ aggressive counter-pressing, they remained comfortable. The high starting position of goalkeeper Alisson, combined with the aerial power of the central defenders, ensured the visitors failed to build from their direct passages of play.

When Cardiff did have a spell of consistent pressure, their ability to draw fouls created opportunities for long free-kicks into the Liverpool box – and the hosts’ back line was forced into battling to clear their lines for the first time in the game. But Liverpool’s second-half shape when playing out from the back did eventually halt the progress their opponents made from dribbles forward, especially during moments of transition. As Moreno and Alexander-Arnold remained deeper during the build from Alisson, wide spaces weren’t available through which Cardiff could counter.

Conceding a relatively cheap goal, which started from a short throw-in before a cross was delivered into the penalty area, will have disappointed the Liverpool defence. They naturally became more cautious in possession after surrendering their clean sheet; only one of the full-backs would move higher, so if the move broke down, they could block the access into their opponents’ strikers and would have enough players back to defend any subsequent long ball forward.

Fresh from a first Premier League victory of the season, a 4-2 win over Fulham, head coach Neil Warnock made only one change to his Cardiff side to face Liverpool – Harry Arter was replaced by Junior Hoilett in midfield.

In the briefest of first-half moments when the visitors managed to sustain some form of possession, they prioritised attacking the spaces in behind the Liverpool full-backs. Looking for forward runs from Hoilett and Josh Murphy, the majority of these long balls ended up on the right side, against Alberto Moreno. With the left-back far less adventurous with his positioning than Trent Alexander-Arnold, it might have been more beneficial to look over to their left side with these balls, thus targeting the greater space from the latter’s forward runs.

Even when Cardiff did attack down their left side, their passes forward often ended up rolling harmlessly into a penalty area well marshalled by Alisson in the Liverpool goal. Should the visitors’ passes have curved away from goal, they might have maintained possession and penetrated the final third with more intent.

When the visitors recovered possession in midfield, Liverpool’s ability to block immediate passing lanes while simultaneously pressing the ball became a real issue. Cardiff lost the ability to maintain the first pass after a regain – at best, they entered a battle of constant transitions.

One brief moment of penetration into the final third involved a clever dribble from Victor Camarasa, who decided to stay on the ball rather than looking for a pass. This initially counteracted Liverpool’s counter-press, whose first priority was to block passing lanes – but with Camarasa not looking to pass, he could make forward progress with the ball against a midfield forced to reassess. In the end, tireless work from the hosts ensured Cardiff’s first-half attacking intent was reduced to a minimum.

The visitors enjoyed a brighter start to the second half, as they drew a number of fouls inside the Liverpool half. This afforded them the opportunity to send both centre-backs forward and attack direct balls into the penalty area, but they couldn’t make anything from these and any transitions into attack were soon reduced as the hosts’ full-backs became more conservative with their positioning.

Despite reacting to Liverpool’s new 4-3-3 shape by dropping into a more reserved defensive block, Cardiff did grab an unlikely goal in the 77th minute. After working a routine throw-in from the right, a deflected cross from Hoilett was poked home by Callum Paterson from close range. They never really had another chance to break out and attack after this, with their opponents’ structure penning them into their own half and blocking any forward access into their lone striker, who consequently couldn’t link play on the counter.

Out of possession, Cardiff were forced to defend from the start, as their narrow 4-4-1-1 structure sat off the ball in a mid-block. A quick overload on the two pressing forwards, Bobby Reid and Paterson, made it difficult for them to stop Liverpool’s progress in midfield. Should either win the ball, the hosts’ counter-press and overloaded midfield soon helped them regain possession.

Various rotations from the Liverpool attack also created problems, especially in central midfield. The Cardiff midfield looked to man-mark across the centre of the pitch, but they were simply overrun and eventually found themselves overloaded with Mo Salah and Roberto Firmino dropping deep to create a four-on-two in the central lane.

In the second half, a more conservative approach from the home full-backs enabled the Cardiff midfield unit to step higher to support Reid and Paterson’s press. They remained in a mid-block, avoiding the temptation of being drawn into a larger press, but formed a more solid defensive block. This came under more pressure once Liverpool shifted to a now distinct 4-3-3, however – and, despite getting on the scoresheet themselves at 2-0 down, Warnock’s men conceded twice late on and departed Anfield well beaten.