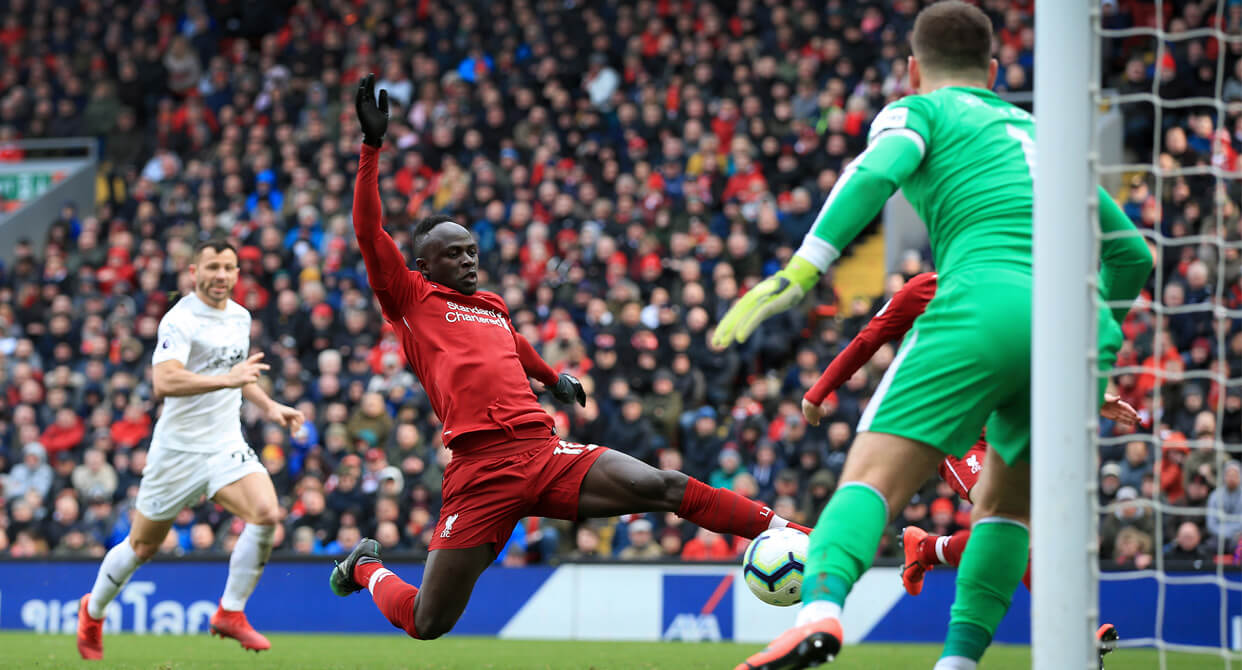 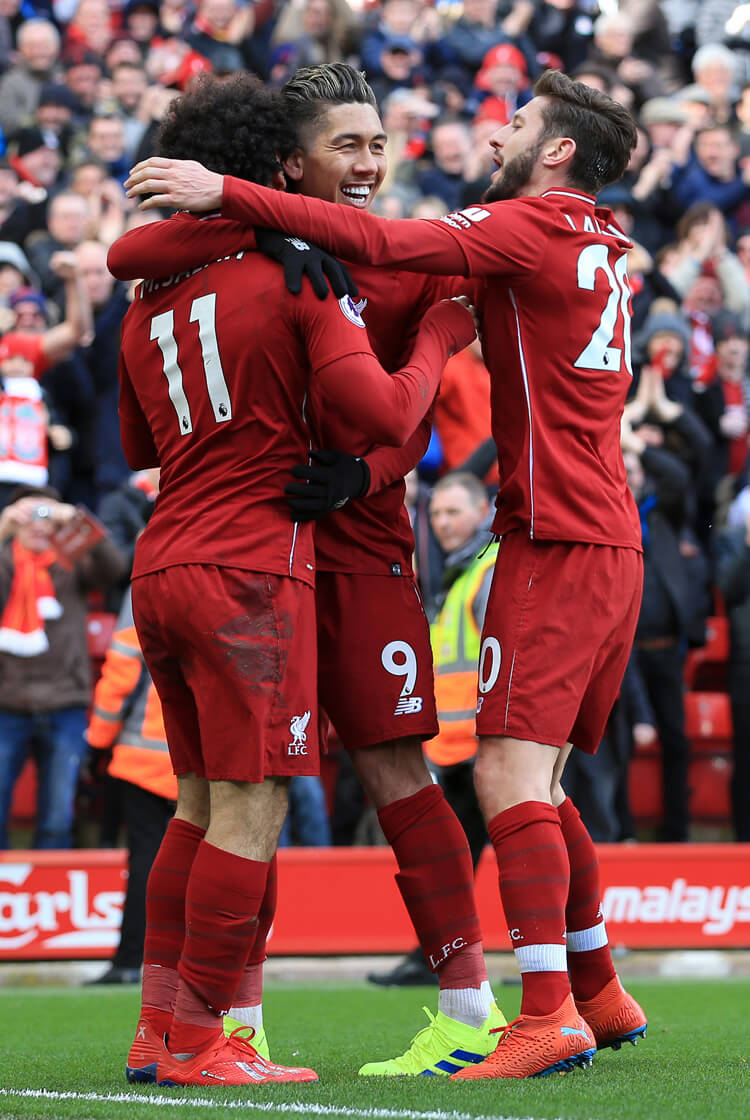 Liverpool came from a goal behind to inflict Burnley's third consecutive defeat and keep the pressure on Manchester City at the top of the table. The hosts got off to the worst possible start though, when Ashley Westwood's corner flew over the head of Alisson into the back of the net, with replays suggesting the Liverpool goalkeeper had been impeded from getting to the ball by the hand of Burnley defender James Tarkowski.

But Jurgen Klopp's side were only behind for 13 minutes, with the recalled Adam Lallana playing a key role in the turnaround that followed. First, with his ball out to Mo Salah on the right wing which started a move that culminated with a tap-in for Firmino and Liverpool's equaliser. And then, 10 minutes later with the block on an attempted clearance by Phil Bardsley that gave Mane the chance to put Liverpool ahead.

Liverpool's third came courtesy of a weak goal kick from Burnley goalkeeper Tom Heaton (perhaps caught up in the blustery wind), which fell straight to Mo Salah. Charlie Taylor put in a swift tackle but succeeded only in knocking the ball out into the path of Firmino who duly tapped in his second of the game.

Burnley got a late goal back via Johann Berg Gudmundsson to set up what looked like being a nervy climax to the game, but moments later Liverpool substitute Daniel Sturridge played in Mane who rounded Heaton to complete his brace and seal the three points. 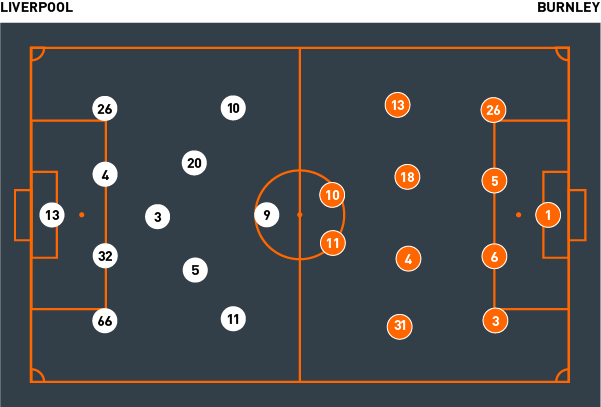 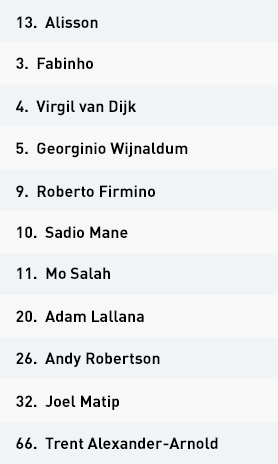 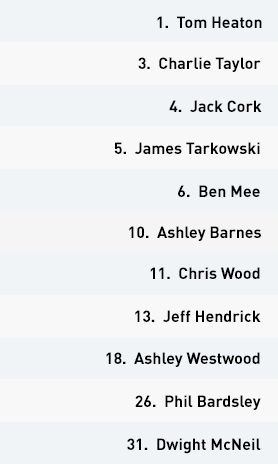 Liverpool set up in a 4-3-3 formation with Fabinho, Georginio Wijnaldum and Adam Lallana as the midfield three behind Mo Salah, Roberto Firmino and Sadio Mane in attack. Liverpool had to try and break down an organised and compact Burnley side and regularly looked to try and exploit the right side in order to do so. To help with the progression beyond the first line of Burnley’s block, Fabinho would often drop between Virgil van Dijk and Joel Matip, allowing the centre-backs to bring the ball out in the half spaces.

Lallana could often be seen dropping in front of Burnley’s midfield line in an attempt to entice Ashley Westwood towards him. When Lallana dropped in, Firmino would often drop into the space between Burnley’s defensive and midfield lines in an attempt to receive the ball in the space vacated by Lallana and Westwood. This use of Firmino was to try and create a midfield overload: as Ashley Barnes and Chris Wood were regularly occupying Fabinho, and with Westwood and Jack Cork matched up against Wijnaldum and Lallana, the movement of Firmino created a 3 v 2 overload. If a Burnley defender chose to drop with Firmino, it would increase the space between the defensive line for Mane or Salah to exploit.

In the second half, Liverpool often dropped Wijnaldum into a false full-back role on the right in the initial progression from the back with the ball. This was a response to Burnley looking to press the ball with their wide midfielder in these areas. Enticing Dwight McNeil towards Wijnaldum would leave more space for Trent Alexander-Arnold to receive on the outside. He would then be pressed by Charlie Taylor which in turn provided more space for Salah to receive.

Liverpool also offered a threat on the counter-attack. Wijnaldum was particularly forward-thinking in these situations and used his power and pace to get ahead of the ball and maintain good speed in transition.

Out of possession, Liverpool looked to press Burnley where possible and did so in a 4-3-3 that became a 4-4-2 as the game progressed, with Mane dropping into the left midfield position. When Liverpool pressed, Firmino and Salah would look to close down James Tarkowski and Ben Mee, Wijnaldum and Lallana would press Cork and Westwood and Mane would close down Phil Bardsley. Salah would switch between pressing Mee and pressing Taylor, if Salah pressed Mee and the ball went to Taylor then Wijnaldum (or later substitute Jordan Henderson), would close Taylor down. This was the trigger for Mane to tuck in on the far side and prevent the diagonal switch.

Liverpool’s counter-press in high areas was a real threat and led to their second goal. Firmino and Salah were constantly hounding the Burnley back-line. If Burnley managed to break out of the counter-press or if the counter-press was not possible then Liverpool would look to recover quickly – Wijnaldum showing real quality to delay the counter-attack in these transitional moments.

Large amounts of Liverpool’s defending was against direct play. Van Dijk contested and won the majority of the aerial duels with Liverpool happy to drop Andy Robertson and Matip deeper, in case the ball landed in behind. Fabinho, Lallana, Wijnaldum and, to an extent, Firmino would be positioned ahead of Van Dijk to collect the second balls.

Burnley set up in a 4-4-2/4-2-4 formation in possession, with Ashley Barnes and Chris Wood often being joined by Jeff Hendrick and Dwight McNeil on the top line while Ashley Westwood and Jack Cork remained deeper, in the central midfield positions. Burnley operated in a very direct manner and would regularly use James Tarkowski and Ben Mee to send long passes towards Barnes and Wood or into the channel between Virgil van Dijk/Andy Robertson or Joel Matip/Trent Alexander-Arnold for their forwards to chase. McNeil and Hendrick would often join the two forwards meaning that Burnley had four potential threats running in behind the Liverpool defence.

Burnley’s other method of attack was to clip crosses into the box from the wide areas; full-backs Phil Bardsley and Charlie Taylor would push up to provide the threat from these areas. If the full-backs advanced on then the central midfielders tended to remain deeper to guard against any potential Liverpool counter-attack. Burnley only managed three shots over the course of the game and tended to look to try and collect second balls from direct play rather than build any attacks through the thirds.

Out of possession, Burnley set up in a 4-4-2 and operated in a mid-block for large parts of the game. Burnley used Barnes and Wood to occupy Fabinho and try to negate Liverpool’s central 3 v 2 overload. Burnley would generally allow Van Dijk and Matip to have possession, then as the ball moved to Alexander-Arnold or Robertson, Hendrick or McNeil would look to apply pressure on the outside shoulder of the Liverpool full-backs to force them inside. Cork and Westwood would then lock on to Adam Lallana and Georginio Wijnaldum. If the Liverpool central midfielders made diagonal runs in behind the Burnley wide midfielders then the Burnley central midfielders would track them, although this opened up potential passing lines to Liverpool’s forwards.

There were occasions where Burnley would look to press Liverpool higher up the pitch and this was when they would tend to get played through. If Barnes or Wood looked to press Alisson then the other forward would push up to the centre-back who would be free and Cork would jump up to apply pressure on Fabinho. The common issue for Burnley was that, as the ball moved out towards one side while Burnley applied high pressure, the far side winger would often stay high, ready to press the full-back on the opposite side to the ball should he receive it. The issue with this was that Cork or Westwood had jumped up to Fabinho, so the far side Liverpool midfielder would always be free.

Liverpool then found it easy to play into their forwards and switch the play out to the free midfielder on the far side to continue the attack. This was evident with Liverpool’s fourth goal. While it was clear that Burnley only adjusted their strategy to press higher because they were chasing the game, they didn’t yield many more opportunities as a result and Liverpool had much more difficulty playing through them when they were deeper.