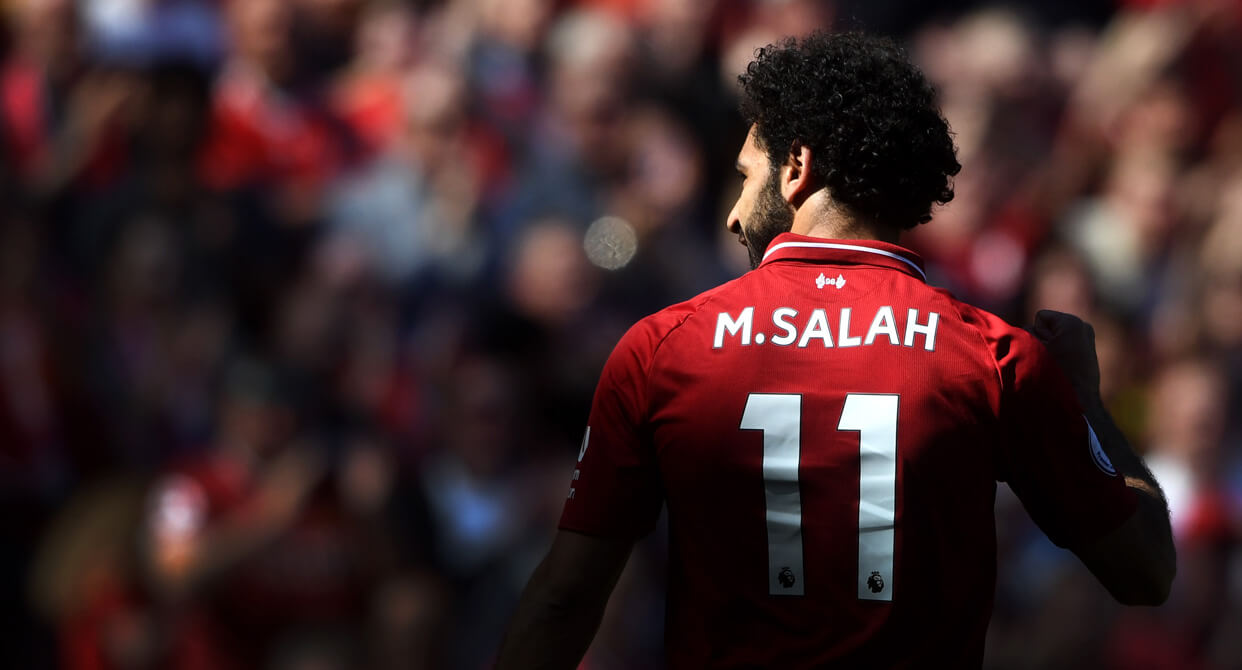 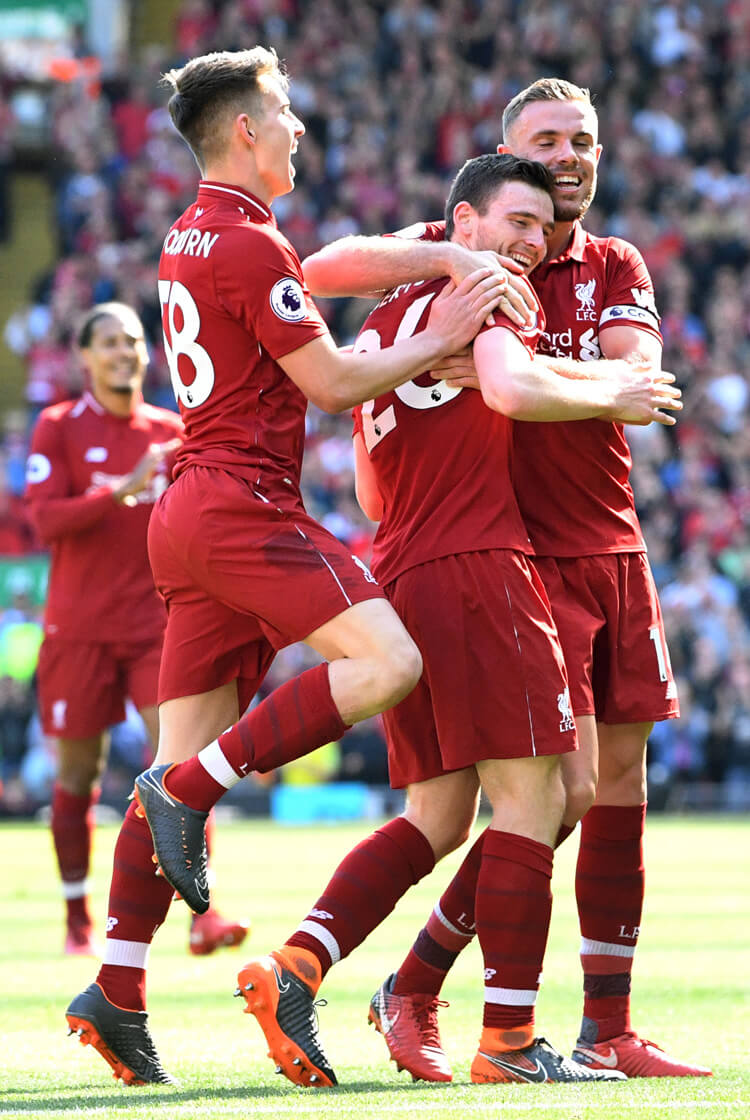 Liverpool ended their Premier League season in style, with Mo Salah, Dejan Lovren, Dominic Solanke and Andy Robertson on the scoresheet in a comfortable win over Brighton at Anfield. It was a victory that sealed the Reds' place in next term's Champions League and saw Salah set a new Premier League record for the most goals scored (32) in a 38-game campaign. Jurgen Klopp can now fix his attention on the Champions League final on May 26, with Real Madrid lying in wait. Brighton will be disappointed with the defeat, but will look back on their first Premier League season with pride. Here, our professional coaches analyse the tactics and key moments from the action on Merseyside. 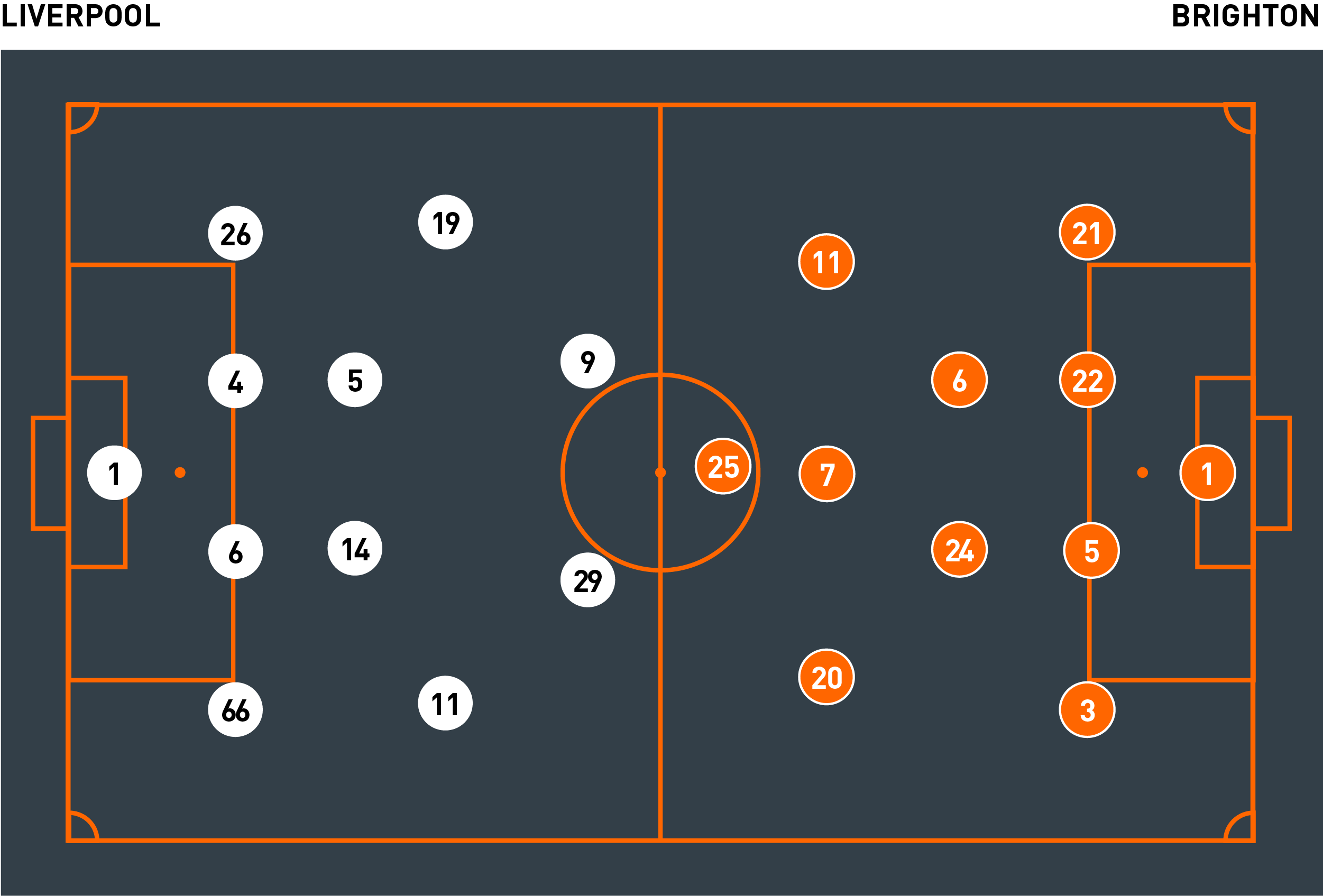 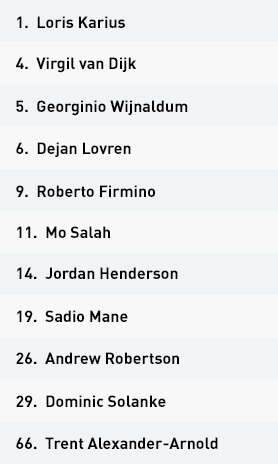 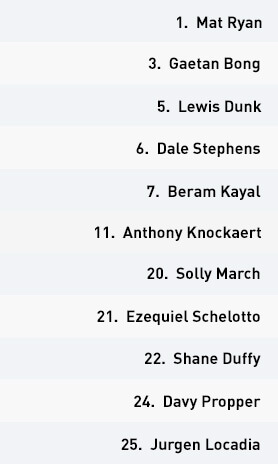 Liverpool started the match in a 4-4-2 structure. Sadio Mane and Mo Salah soon moved forward, which created more of a 4-2-4 shape. The hosts dominated the ball from the first whistle, forcing Brighton into a low defensive block.

In possession, Trent Alexander-Arnold provided width on the right from full-back. This enabled Salah to drift into central positions, accompanying the two centre forwards Roberto Firmino and Dominic Solanke. Liverpool initially built using Alexander-Arnold on the right, as the full-back fired multiple low crosses into the Brighton penalty area. Despite a constant pressing force against their back line, the visitors dealt with the crosses well.

The Reds, recognising this, altered their attacking build-up, instead looking to combine in central areas. While they formed a low block, Brighton lacked compactness and soon had periods of emergency defending. Liverpool split their opponents' midfield with quick, incise forward passing. They opened the scoring as Salah spun and shot in the 26th minute.

Brighton, from here, began to have longer spells in possession as the hosts threw additional players forward in search of a crucial second goal. Georginio Wijnaldum, with support from Alexander-Arnold on the right, often drove forward from midfield. This opened up space for Brighton to attack after regaining possession.

Despite brief moments of progress, however, Brighton lacked quality final balls and Liverpool eventually regained possession. This opened up a new dimension for the Reds, as the Seagulls’ back line squeezed up the pitch to support their midfielders in attack.

Liverpool could now exploit Brighton’s high back line with balls over the top for Salah and Mane. Mane wasted two good chances on goal, but defender Dejan Lovren headed home a crucial second from full-back Andy Robertson’s cross. Up to this point, Brighton's defence had dealt well with balls into the box.

Similar trends continued throughout the second half. The home side dominated possession, as Liverpool’s attacking quartet provided constant pressure in central areas. Brighton again had good spells, making use of the wider areas in attack, but still lacked an end product. Poor decision-making often wasted chances after patient spells of defending.

As Brighton began to move forward, they left space in behind as Liverpool grabbed a game-killing third goal with a counter-attack from deep. Salah drove forward at pace, leaving the away side's defenders desperately struggling to recover behind him. He moved the ball on to Solanke, who hammered home his first goal for the club.

Robertson also opened his goalscoring account late on, slotting home after substitute Danny Ings had crossed low into the Brighton box. It was a convincing display from Liverpool, and Jurgen Klopp will be delighted that there are no fresh injuries in preparation for their Champions League final against Real Madrid on May 26.

Brighton began in a 4-2-3-1 defensive structure, as they looked to sit deep in a low defensive block. Up until the 20th minute, they had little possession of the ball. They remained in a low block, hoping to frustrate the home side as they built using crosses, mainly down the Brighton left.

Chris Hughton's men coped well despite the early pressure, as their powerful central defenders, Lewis Dunk and Shane Duffy, comfortably dealt with crosses from Liverpool’s marauding right-back, Trent Alexander-Arnold. As the Reds adapted their build-up play towards the middle, though, Brighton failed to adjust, allowing the home side to play cleanly through their midfield lines.

When Brighton did manage to regain possession, Liverpool’s front line won the ball back immediately through fast, direct counter-pressing. With four fast attacking players in the central lane of the pitch, the visiting midfield couldn't act quick enough, as they were quickly surrounded by red shirts. Naturally this prolonged Liverpool's attacks, forcing Brighton to maintain their low block status.

After going a goal down, Brighton remained in their low block until the intensity from the home side dropped. As Liverpool searched for a second goal, they had space to attack in wide areas. By the 30-minute mark, both Reds full-backs were moving forwards, creating space for the counter. However, poor final balls from midfield ensured the home side's clean sheet was intact at half-time.

Brighton started well in the early parts of the second half. They again built using the wide spaces, as Liverpool maintained a front four in central areas. Particularly on their left side, the Seagulls had time and space to build meaningful attacks, as Mo Salah would rarely recover back into defensive positions. Solly March was able to drive forward from left midfield, but again lacked quality in the final third, often electing to shoot rather than work the ball into better attacking positions.

Glenn Murray and Pascal Gross were introduced midway through the second half, to increase their threat in attack. The hosts, though, eventually took their chances, as Brighton were caught out on the break with an effective Liverpool counter-attack. The Seagulls did have the momentum to push players forward, but were punished as Salah and Solanke combined to finish them off.

The visitors had a few moments to score late on, as crosses into the Liverpool penalty area were contested by the powerful Murray. But, despite some late pressure, Brighton failed to hit the back of the net, and the Reds rounded off the game with a late fourth goal.

The key battle involved Liverpool’s build-up play. Initially they looked to use the right side, and built using the overlapping runs of full-back Trent Alexander-Arnold. The young full-back powered multiple low crosses for various runners – Salah, Firmino, Solanke, and Mane – to latch on to. Brighton dealt with these balls with ease, as the powerful central defenders cleared any relevant threat.

It was the adjustment of Liverpool’s build that ultimately won them they game. They stopped working the ball to the wide areas, and instead focused on central penetrations. Brighton’s low block lacked detailed compactness, which Liverpool duly exploited.

Splitting forward passes enabled a direct link from the back line into the attacking forwards. From there, Liverpool could create chance after chance, it being a matter of time before they were converted into goals.