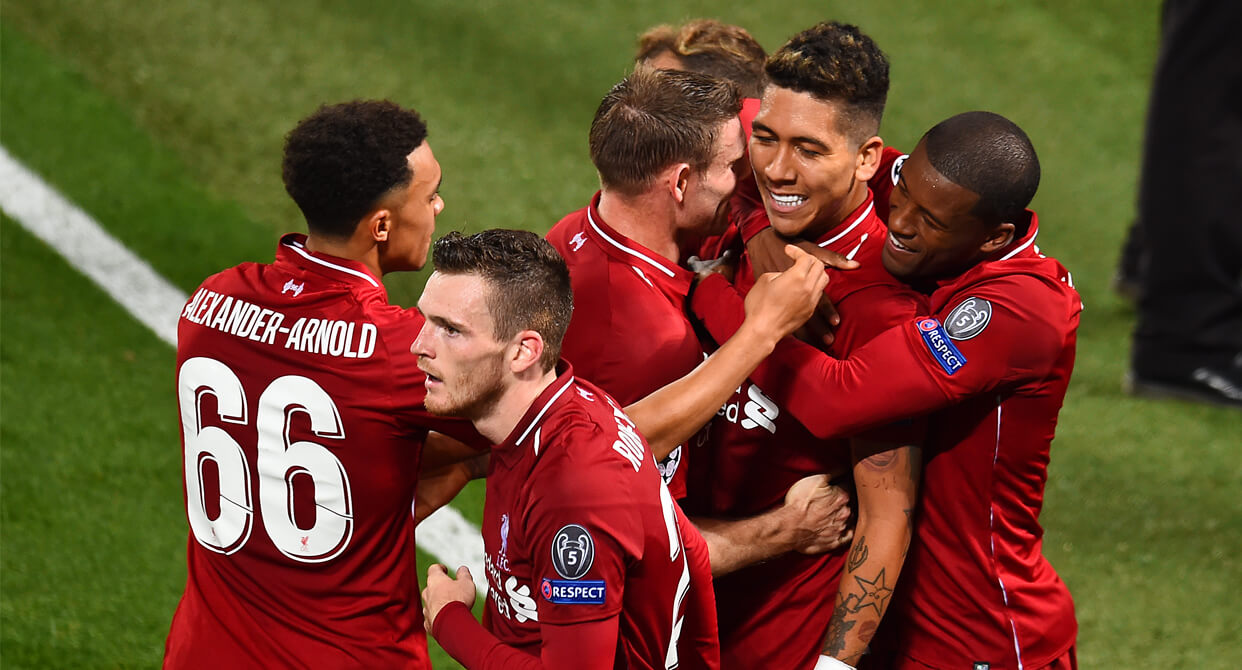 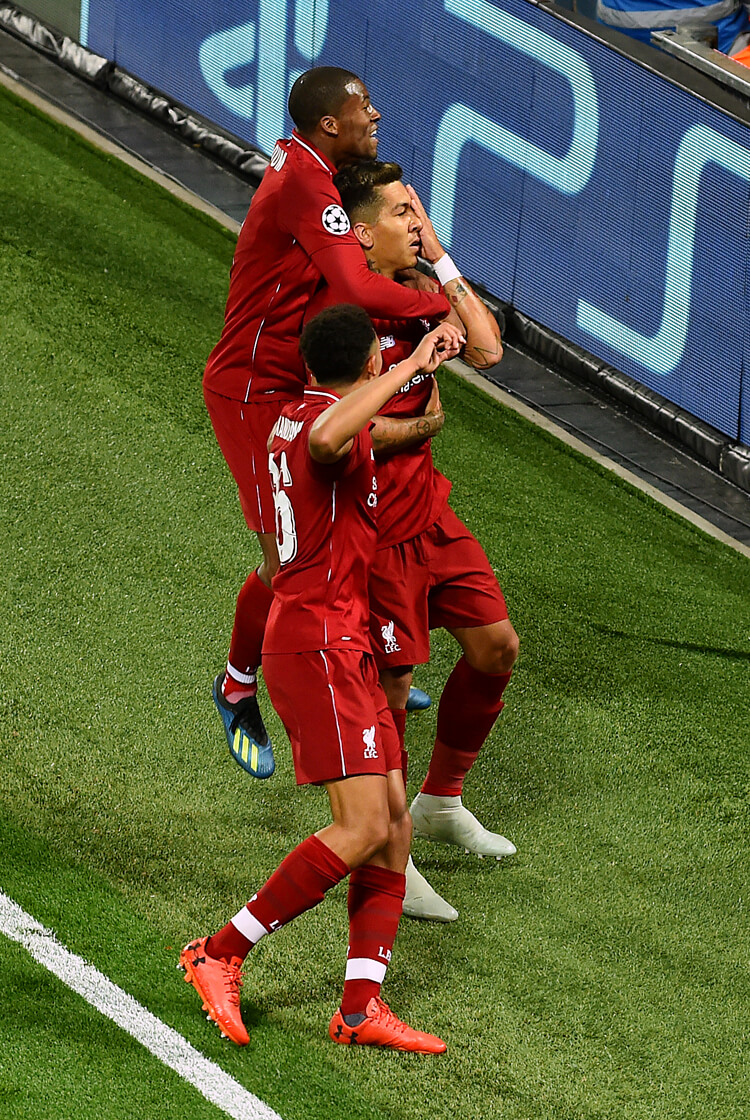 Liverpool got off to a winning start in Group C of this season’s Champions League, with Roberto Firmino coming off the bench to score the decisive goal in a thrilling contest with Paris Saint-Germain at Anfield. The Brazil international started as a substitute, having suffered an eye injury in the weekend’s league victory over Tottenham – but he made the difference in injury time, with a fine low strike after PSG had come back from two goals down to draw level. Daniel Sturridge took Firmino’s place in the starting line-up, and his header from a superb Andy Robertson cross broke the deadlock with half an hour played. James Milner soon doubled their advantage from the penalty spot, after Georginio Wijnaldum had been brought down by Juan Bernat. Thomas Meunier halved the deficit before half-time, and with the hosts failing to add to their lead Mbappe scored the goal that appeared to have earned his side a point in the 83rd minute. Firmino, though, was on hand to ensure Liverpool claimed three deserved points. 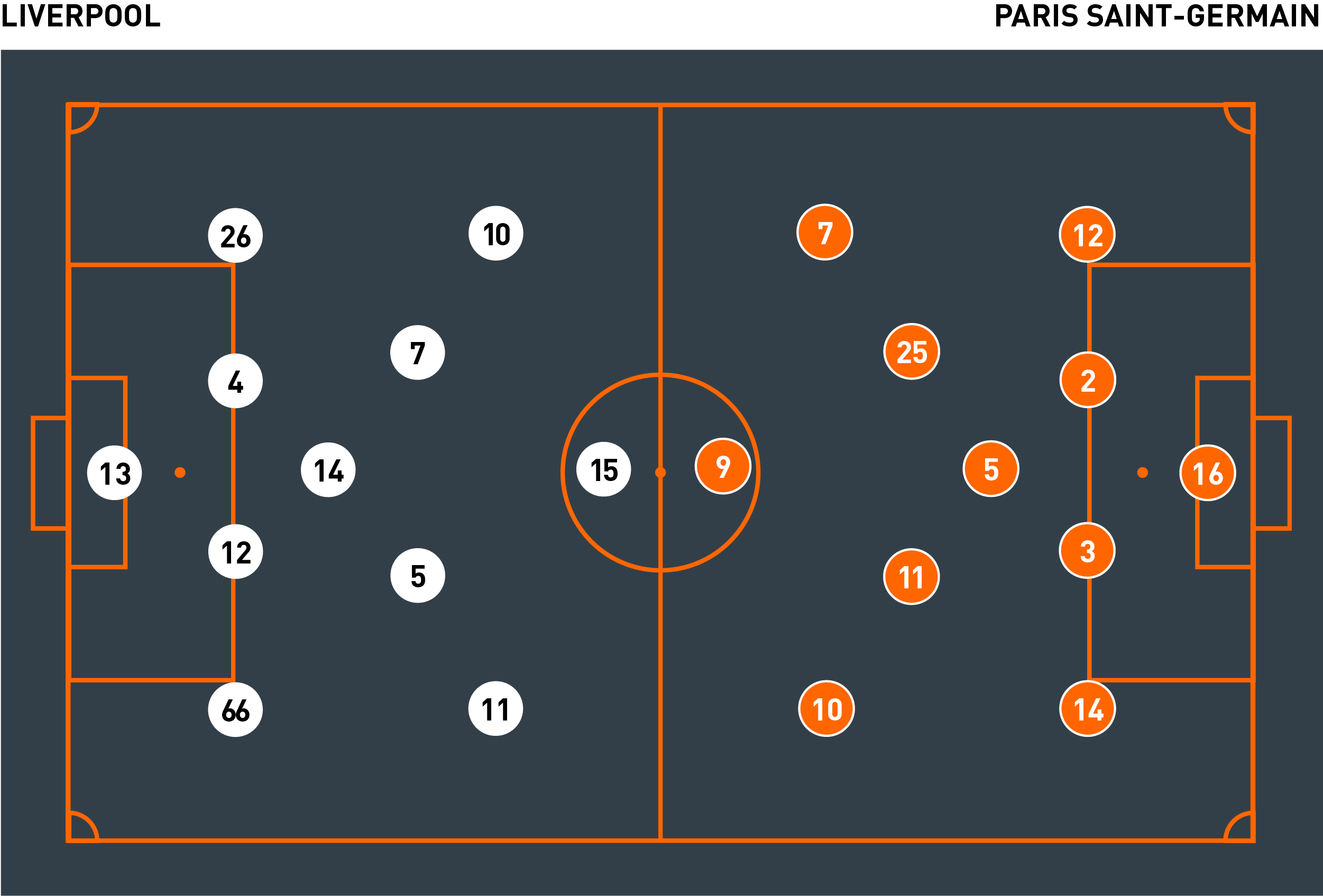 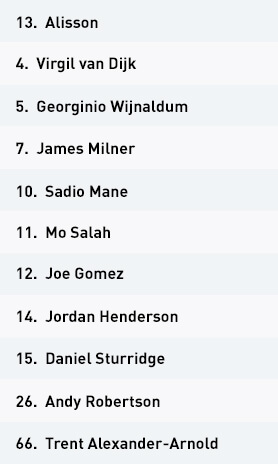 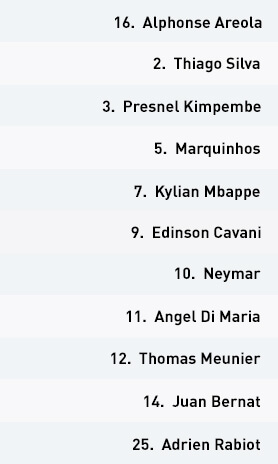 Liverpool set up in a 4-3-3 formation, with Daniel Sturridge making his first start in a Champions League fixture for the hosts, taking the place of Roberto Firmino alongside Mo Salah and Sadio Mane in the front line. Jordan Henderson, James Milner and Georginio Wijnaldum provided the midfield support.

Jurgen Klopp’s players focused their efforts on playing around the side of Paris Saint-Germain’s midfield three in possession, particularly on the right side. With the PSG central trio wanting to remain compact in order to prevent central penetration and Neymar largely uninterested in tracking runs, the wide areas were frequently left vacant. Angel Di Maria was often the player forced out wide to help left-back Juan Bernat – but this in turn created more space centrally, should the Reds have wished to play inside.

The relationship between the home side’s full-backs and central midfielders was key in maintaining balance in the build-up and attacking phases, while still creating options for further penetration. Milner was a standout example of this; the 32-year-old was permanently aware of the positioning of his teammates and would adjust his own position accordingly. When left-back Andy Robertson wanted to move forward, for example, Milner would provide the cover. Given the threat of Kylian Mbappe, it was important that Milner offered his assistance to centre-backs Virgil van Dijk and Joe Gomez when necessary.

Similarly, when Robertson stayed back, Milner would often take up a wider position – this gave PSG the dilemma of whether to mark or leave him. Either way, space would be created centrally or out wide. It’s no surprise, then, that all three of Liverpool’s goals – including in the build-up for the penalty – came as a result of wide play.

The hosts remained in their 4-3-3 shape out of possession. They operated predominantly in a mid-block and would allow the visitors’ centre-backs to keep possession, with pressure only moderately applied when the ball went into the full-backs. They would increase the aggression of their press when a central midfielder received the ball with his back to goal.

Their counter-press upon losing possession was a key area of strength, successful in nullifying any counter-attacking threats for the majority of the game. Henderson and Milner were particularly effective at this, most notably against Mbappe – and it was Milner who provided exactly this quality, robbing the French forward in the lead-up to Firmino’s late winner.

Paris Saint-Germain set up in a 4-3-3, with Marquinhos as the holding midfielder and Angel Di Maria and Adrien Rabiot just ahead of him. Kylian Mbappe, Edinson Cavani and Neymar made up the forward line.

Thomas Tuchel’s players tried to get the ball to Neymar’s feet at every opportunity. The Brazil international tended to come short to receive rather than threaten in behind, before driving at and taking on as many Liverpool players as possible. While this approach didn’t always yield success in creating a chance for Neymar himself, it did give the hosts a problem of committing more bodies towards him. This was particularly evident in his run late on, when the ball eventually found its way to Mbappe, who struck the equaliser. Without PSG continually looking to find the feet of Neymar, this opportunity wouldn’t have come about.

When quickly finding Neymar was not possible, they would often use Di Maria to exchange passes with the centre-backs in order to attract a Liverpool player. The Argentine would then move horizontally or diagonally to open up a passing line to Neymar for the centre-back to find. On other occasions, Marquinhos would drop in between the centre-backs, pushing them wide to form a back three – this allowed the full-backs to push higher and in turn enabled Neymar to come inside and operate in the half-space.

The visitors would also try to attack by exchanging short passes in midfield to attract pressure and bring Liverpool’s defensive line up. Mbappe could then find space in behind, for his teammates to try and find him with a direct pass. The Liverpool defence was adept at denying this space in behind, however, often playing the offside trap to good effect.

PSG remained in their 4-3-3 shape out of possession, operating in a mid-block, and would look to protect the centre of the pitch. Their issues came in defending the wide areas, where Liverpool were afforded a huge amount of space. It took only basic play for the hosts to bypass the first line of their opponents’ press, which naturally created a number of problems for the visitors.

The positioning of the Reds’ front three made it difficult for the full-backs to move too far out from the back line, while the narrow midfield three would leave large spaces centrally and on the opposite side, if they moved across. PSG struggled to gain control of the game as a result; despite coming back from two goals down to equalise, they displayed very little to suggest they could challenge Europe’s elite for the Champions League title their owners so crave.