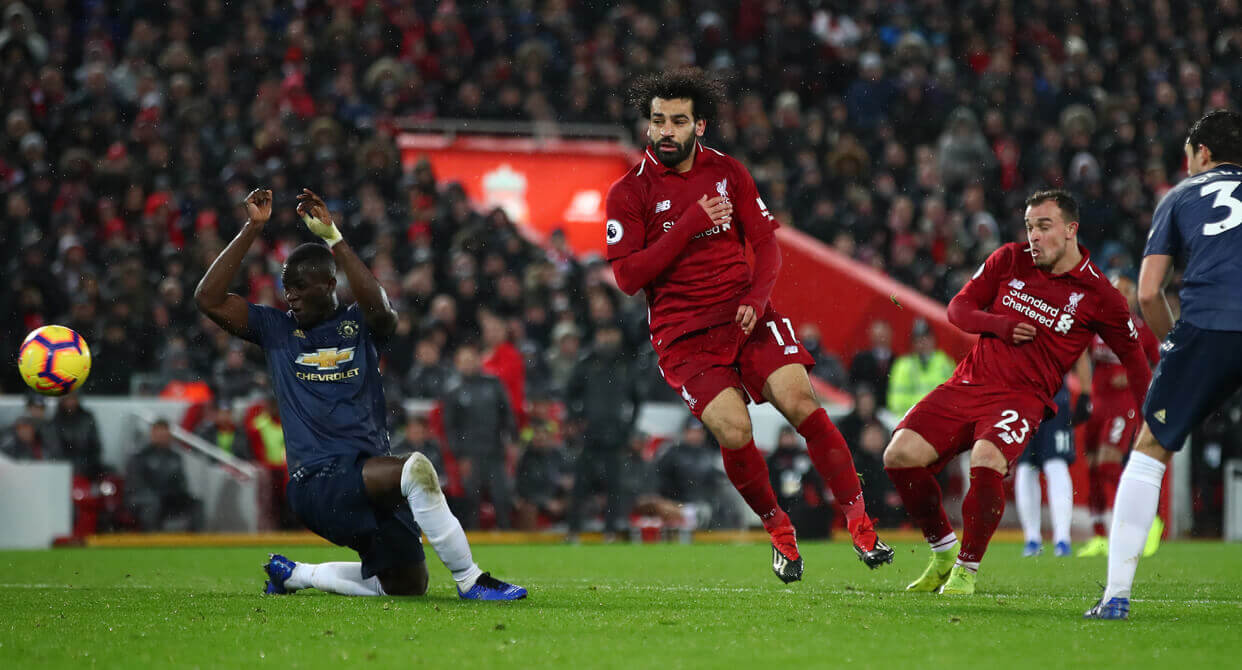 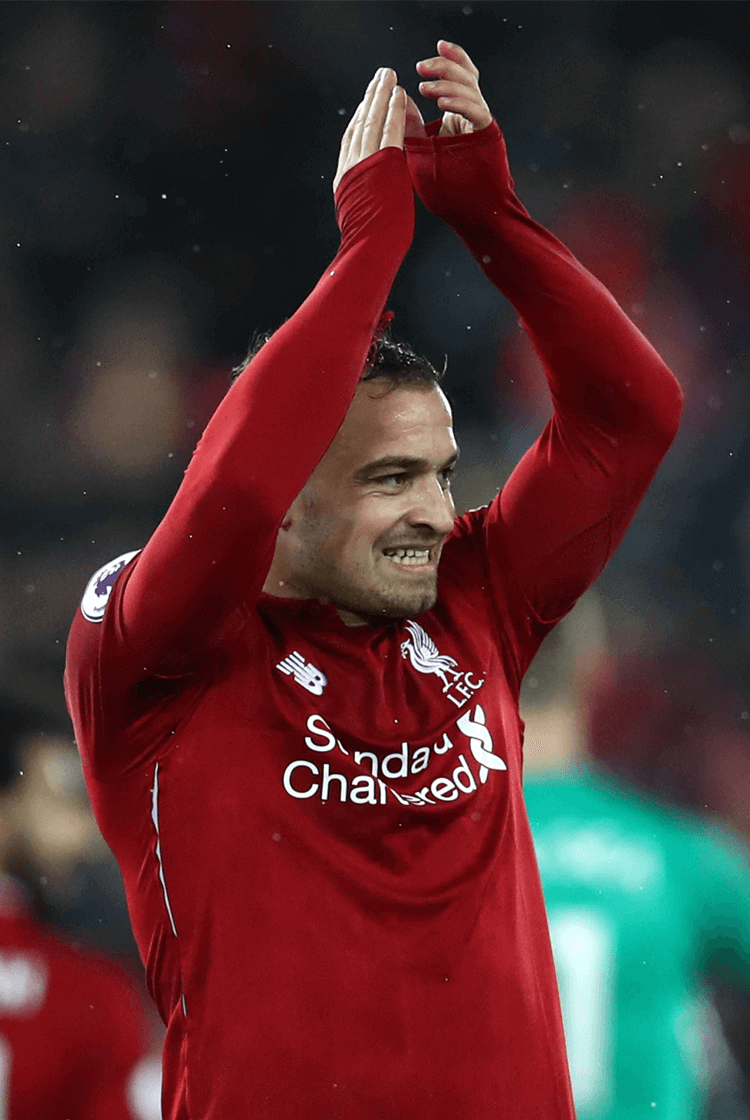 Liverpool returned to the top of the Premier League table with an ultimately comfortable 3-1 home victory over their great rivals Manchester United at Anfield. Jurgen Klopp’s team dominated from the opening whistle and deservedly went ahead when Sadio Mane controlled a superb Fabinho pass before volleying past David de Gea in the United goal. A handling error from Liverpool keeper Alisson gifted Jesse Lingard an equaliser less than 10 minutes later, but United were unable to secure any real footing in the contest and ended up facing a Premier League season high of 36 shots. In the end, it was two deflected strikes from substitute Xherdan Shaqiri that secured the points – but the final scoreline accurately reflected the two sides’ difference in quality as the pressure on United manager Jose Mourinho continues to grow. 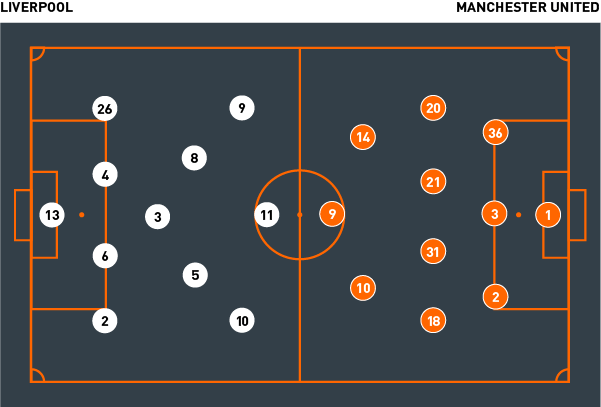 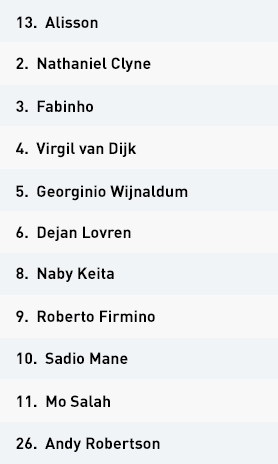 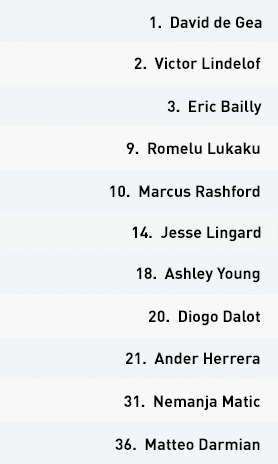 Jurgen Klopp set Liverpool up in a 4-3-3 formation, with Fabinho, Georginio Wijnaldum and Naby Keita forming a midfield three behind Sadio Mane, Roberto Firmino and Mo Salah. Liverpool sought to dominate possession and play vertically into the forwards’ feet where possible.

They achieved success in the initial phases by creating overloads around the first line of United’s press – particularly through Fabinho – to ensure a clean build. Upon breaking the first line, Liverpool would look to drop Firmino from the top line to create an extra man in midfield; they often then pushed Keita into the newly created space to discourage United defenders from dropping with the Brazilian.

Once Liverpool had the ball in more advanced areas, they would look to drop Mane or Salah five yards or so. Their markers would track them on an individual basis, which pulled United’s defensive line around and opened up the opportunity for combinations – a strategy that Liverpool tried but failed to properly ex-ploit. While Liverpool managed to register 36 attempts at goal over the 90 minutes – a season high in the Premier League – very few of them were clear-cut chances.

The second-half introduction of Xherdan Shaqiri for Keita added more creative quality to the attacking midfield area, and he would regularly position himself between the lines to receive the ball. Crucially, he would hover back as the play progressed outside and ahead of him, and look to arrive late at the edge of the area. This was a tactic that proved decisive in the game, as these movements were central to both of the Swiss international’s goals, albeit both were also helped by deflections as Liverpool reclaimed top spot from Manchester City

Out of possession, the Reds would press in their 4-3-3 shape and try to show United out wide. The press would usually be led by the forwards, although Keita quite often joined the front line while Mane tucked in to midfield on the other side. Importantly, the players around and away from the ball would all be on the front foot and ready to apply the next wave of pressure should the line in front be beaten. Centre-backs Virgil van Dijk and Dejan Lovren would also be on the front foot and ready to step in front of their men if the ball was played into feet, as well as being in a position to compete for aerial balls.

The most important element of Liverpool’s out-of-possession work was their counter-press, which was immediate and intense. This pressure forced United into rushing their passes, which usually went long anyway but were now more inaccurate due to the level of pressure on the player in possession. Should the counter-press be unavailable, then the Liverpool players would recover quickly back towards their goal, but also try to crowd the man with the ball and block off any passing lanes forwards.

Jose Mourinho set his Manchester United team up in a 3-4-3 formation in possession, with Diogo Dalot and Ashley Young playing either side of Ander Herrera and Nemanja Matic in midfield. Marcus Rashford and Jesse Lingard supported Romelu Lukaku in attack.

United demonstrated very little in the way of common themes to their attacking play, although they often sent long balls forward for Lukaku to hold up or battle for in the air. They were cautious in their positioning when in possession, wary of the potential counter-attacking threat posed by the likes of Salah and Mane. As a result, they were hesitant to send numbers forward, which perhaps goes some way to explaining the lack of attacking threat and sustained possession.

Often, Herrera and Matic would remain slightly deeper so that Young and Dalot could move forwards – which in turn would push Lingard and Rashford inside to support Lukaku. If Young didn’t push forward, then Herrera would occasionally move up and play between the Liverpool lines.

Mourinho switched to a 4-3-3 in the second half, with Matteo Darmian at right-back and substitute Marouane Fellaini joining Matic and Herrera in midfield. Fellaini offered an extra aerial threat going forwards, although unfortunately for United the switch had more of an impact when they were out of possession.

To begin with, United looked to press in a 4-4-2 structure, with one of Lukaku, Rashford or Lingard dropping into midfield while the other two led the line. They started on the front foot and pressed high to try to force Liverpool wide – although the three-on-two overload Liverpool had in midfield meant they had little joy pressing in this way.

The visitors sometimes took a higher risk when pressing, in order to force mistakes from Liverpool. This meant using two of the front three to press the centre-backs and going man for man across the rest of the pitch, with Young and Lindelof responsible for Mane and Salah. This approach did seem to pay off, however, as it forced Liverpool to rush their passes and make errors in possession.

Dalot’s role in the first half was to make sure that he always tracked Robertson, which in effect left Darmian, Bailly, Lindelof and Young as a back four with Matic and Herrera offering another layer of protection in front. This compact structure goes some way to explaining the amount of shots Liverpool took from distance. Mourinho’s substitutions changed United’s defensive structure, however, and perhaps contributed to the two goals conceded in the second half.

With Dalot off and Fellaini on, United reduced the threat of the midfield overload and helped stifle the dropping movements of the Liverpool forwards – but this left Robertson with more space to get forward, and it was his combination with Mane down the left that eventually led to Shaqiri restoring Liverpool’s lead. Then, with Herrera off and United chasing the game, only Matic was left as the front screen for the defensive line – and he couldn’t cover the full width of the pitch, which provided Shaqiri with plenty of room to receive and drive forwards. In the end, despite the deflections, Liverpool exploited United’s deficiencies at both ends of the pitch and fully deserved the three points that saw them back to the top of the table.