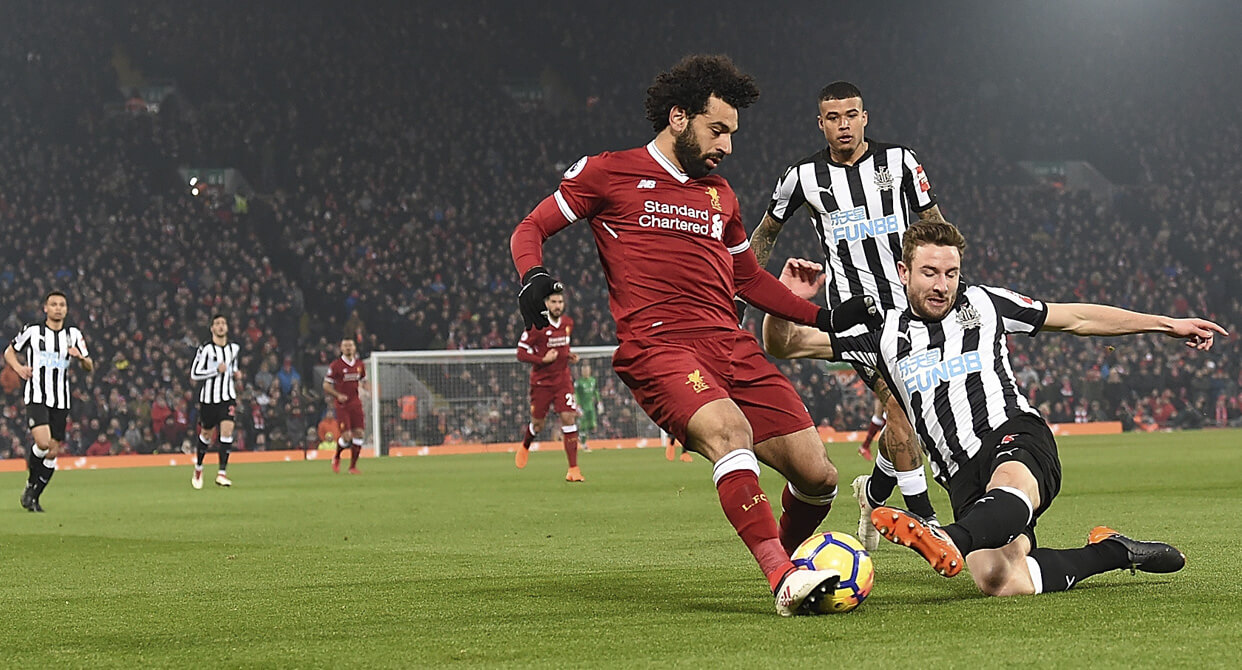 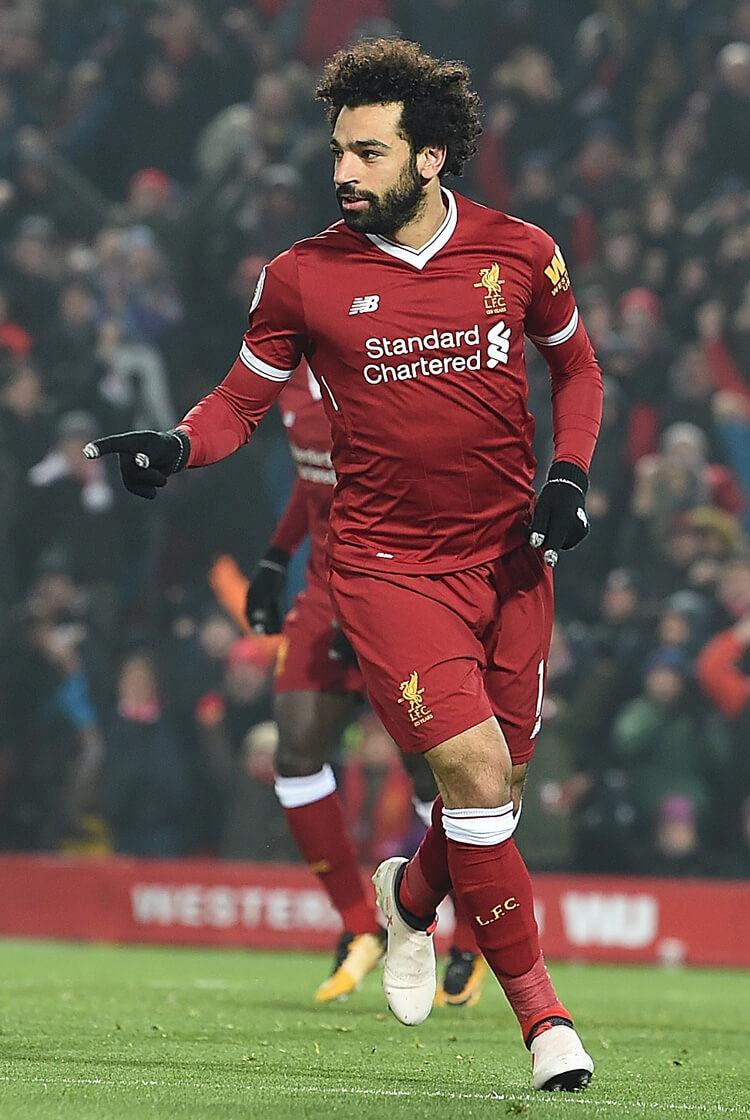 Rafa Benitez returned to Anfield with a plan to frustrate his former club, but his current Newcastle team were unable to stop the irrepressible Mo Salah as Liverpool ran out comfortable 2-0 winners. The Egyptian opened the scoring five minutes before half-time, after excellent work from the impressive Alex Oxlade-Chamberlain. Newcastle rarely threatened at any point, and the game was ended as a contest when Sadio Mane ran on to Roberto Firmino's clever pass early in the second half. 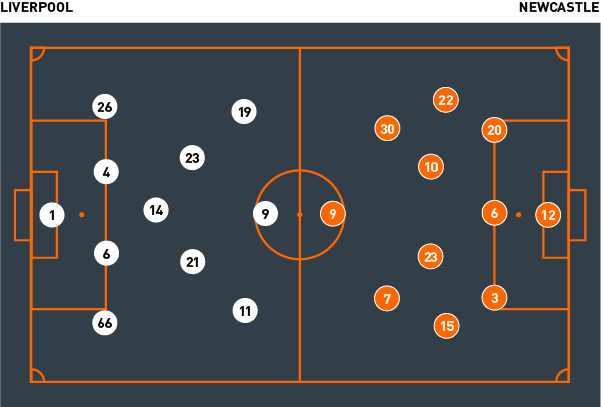 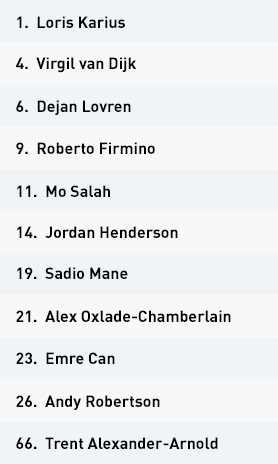 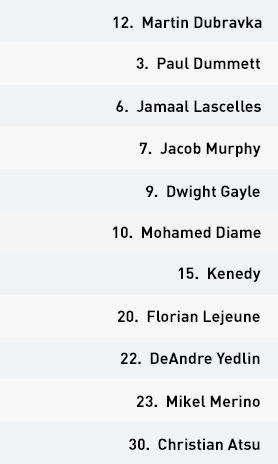 Jurgen Klopp’s team started in a 4-3-3, moving to a flat 4-4-2 in the defensive phase, with one of Sadio Mane or Mo Salah dropping back into the midfield. Liverpool’s first line of pressure, mainly Roberto Firmino along with Mane and Salah, closed off central passing lanes and pressed to try and win possession back as high up the pitch as possible.

The home side were solid in midfield, always outnumbering the ball-carrier and limiting his passing options. The trio of Jordan Henderson, Alex Oxlade-Chamberlain and Emre Can were quick to seek out interceptions and prevent Newcastle from progressing through the middle. Their defensive line was focused and well positioned in their own third throughout the match. Dejan Lovren and Virgil van Dijk were dominant in the air and nullified any potential threat from direct Newcastle balls into Dwight Gayle. The only times the defensive line was in any way threatened came when the Magpies moved the ball wide from midfield areas and managed to get crosses in to dangerous areas – but the home side generally dealt easily with this too.

In the defensive transition, they were well prepared for any turnovers and able to immediately press having lost the ball. Henderson, the deepest-lying of the midfield three, covered any gaps that could be exploited behind the defensive line.

In attack, they looked to play out from the back, with Loris Karius looking for his centre-backs. They were put under little pressure and not afraid to carry the ball into the opposition half – van Dijk in particular was given time and space to play into Can or Henderson repeatedly.

Oxlade-Chamberlain, Salah and Can played with great positional freedom; they moved around in attack and worked hard to find spaces in between the lines and in behind Newcastle’s defenders. The visitors found it difficult to defend runs in behind them, as shown by both Liverpool goals, but were also vulnerable in wide positions. The movement of Mane and Salah inside from their wide starting positions created space for both full-backs, Trent Alexander-Arnold and Andy Robertson, to advance into.

Rafa Benitez’s team started in a defensive 5-4-1 formation and maintained it in both attack and defence, where their lines dropped back and defended close to their own goal. They were happy to allow Liverpool’s centre-backs time on the ball, with Dwight Gayle and Christian Atsu attempting to shut off central passing lanes, while the midfielders would begin to press the ball when Liverpool had possession in their half. If they found themselves outnumbered, they looked to drop back and delay any Liverpool attacks while they tried to regain their defensive shape. Both Mikel Merino and Mohamed Diame showed good awareness of when to press and when not to.

They dropped deep in their own third, as they felt more comfortable defending close to their goal, and looked to outnumber both the player in possession and any potential receivers. Despite this, they left spaces in between their defensive lines, were vulnerable against the Liverpool full-backs in wide positions and struggled to defend runs in behind, as evidenced in both the goals they conceded.

In the defensive transition, the visitors tried to win the ball back and stop the counter-attack immediately. If this wasn’t possible, they dropped back or looked to commit tactical fouls in a bid to delay their opponents.

In attack, goalkeeper Martin Dubravka and the three centre-backs favoured direct passes into teammates – mostly lone forward Dwight Gayle – in the opposition half, although this created little danger against the aerial prowess of Dejan Lovren and Virgil van Dijk. The midfielders also adopted the direct approach, although with little or no impact.

The intelligent passing of Mikel Merino in the centre did allow them to occasionally combine in midfield and progress towards the Liverpool area, but the team struggled for continuity and their most dangerous situations came from overlaps on the wing, with DeAndre Yedlin on the right and Kenedy on the left. Gayle, Atsu and later Joselu never managed to build enough of an attacking presence in the Liverpool box, however, so crosses from wide areas had little success.

Jurgen Klopp set Liverpool up in attack to combat Newcastle’s deep-lying back five. He pushed Sadio Mane and Mo Salah in to central areas alongside Roberto Firmino, to allow space for the full-backs Trent Alexander-Arnold and Andy Robertson to attack.

The Liverpool midfield trio of Jordan Henderson, Emre Can and Alex Oxlade-Chamberlain were excellent. They broke up any Newcastle forward movement with ease, worked to create positional superiorities when attacking and moved the ball swiftly and cleverly.

Despite Newcastle’s compact defensive lines, Mane and Salah were still able to identify spaces and make runs in behind. This led to both Liverpool goals on the day.

Rafa Benitez brought Newcastle in with a defensive gameplan built on keeping positional discipline. His main objective was to prevent Liverpool progressing through the centre and to prioritise defensive depth.

By maintaining this approach throughout, Newcastle failed to ever genuinely threaten in attack. They lacked an attacking presence in Liverpool’s box for most of the game, which made it difficult for them to create chances even after they fell behind.