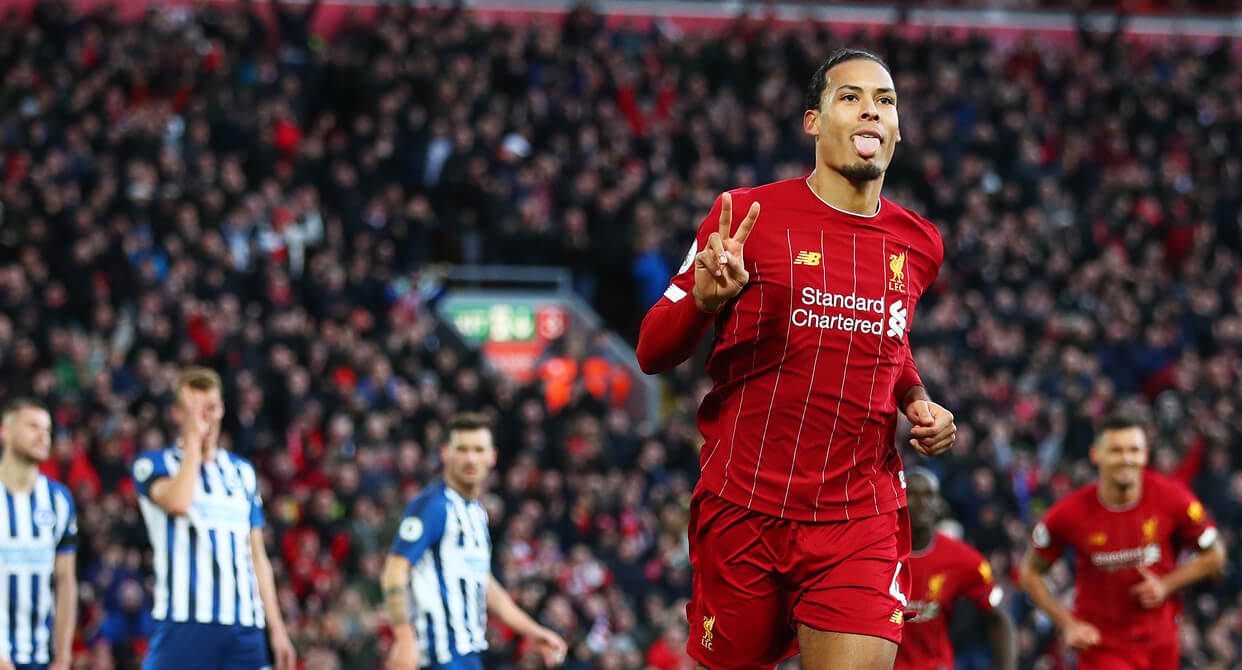 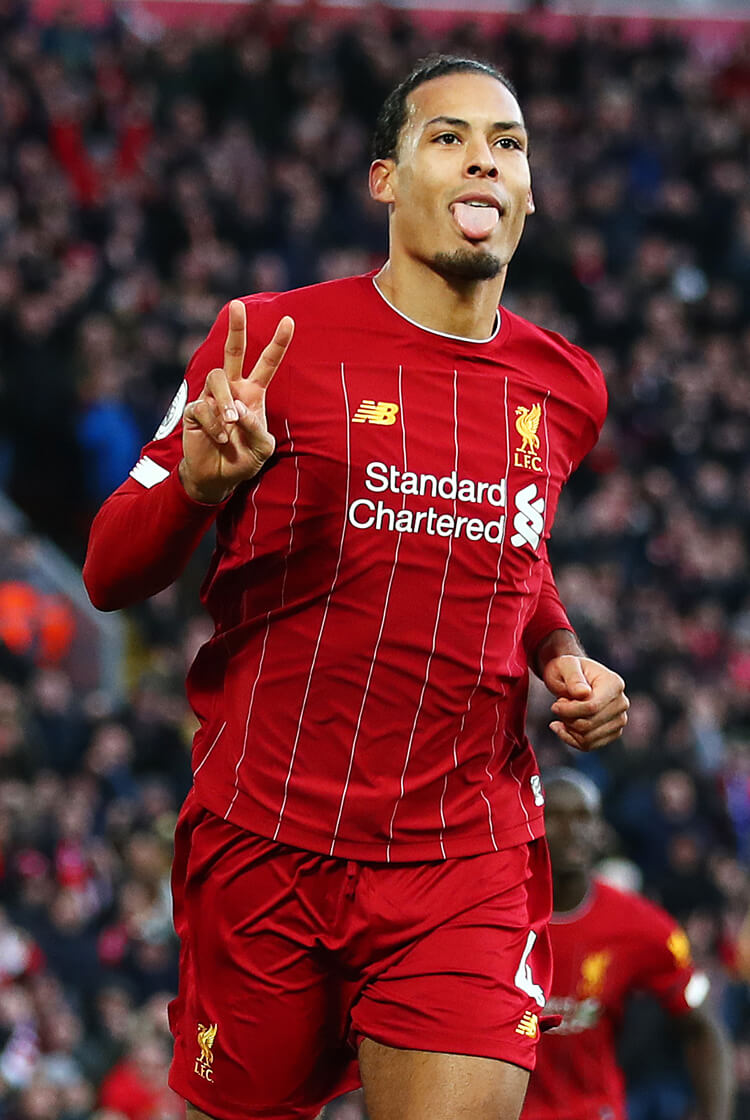 Liverpool maintained their breakneck pace at the top of the Premier League with a home win over Brighton that ultimately proved much more stressful than it needed to be. Two Trent Alexander-Arnold crosses were met with two towering Virgil van Dijk headers to earn Jurgen Klopp's men a commanding two-goal lead within the first half-hour, but Brighton enjoyed large spells of possession and were gifted a route back into the game when Reds goalkeeper Alisson flew out of his area to handle with little more than 10 minutes remaining. The Brazilian was inevitably dismissed and, while his replacement Adrián was busy organising his wall for the resulting free-kick, Lewis Dunk simply passed the ball into the far corner. The visitors pressed for an unlikely equaliser against the home team's 10 men, but weren't able to breach the Liverpool defence as the Reds held on for another valuable win. 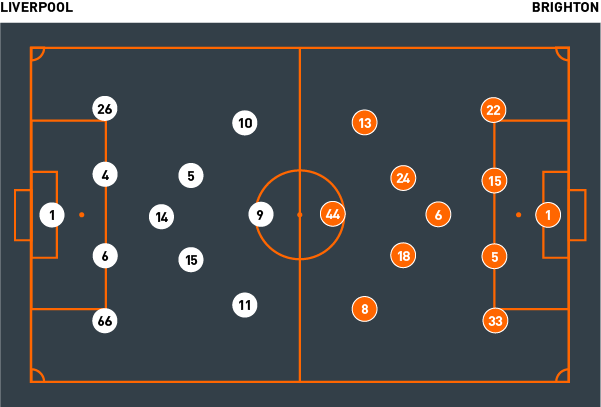 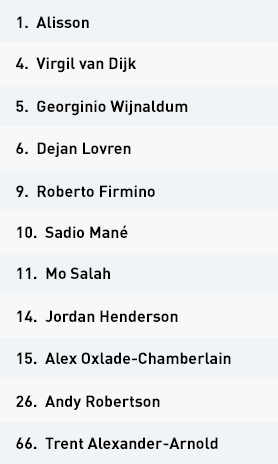 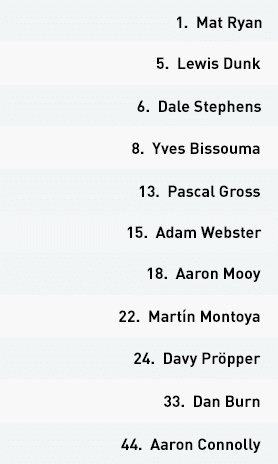 Jurgen Klopp set his Liverpool team up in its customary 4-3-3 structure, with Jordan Henderson filling in for Fabinho in the deeper midfield role behind Alex Oxlade-Chamberlain and Georginio Wijnaldum. The usual trio of Mo Salah, Roberto Firmino and Sadio Mané formed the attack.

The hosts looked to build from the back, but found central areas restricted due to the narrow nature of Brighton’s front line as they tried to prevent service in to Henderson. In order to improve the initial phase of the build-up, Liverpool looked to drop Henderson between centre-backs Virgil van Dijk and Dejan Lovren, to create a wider line of three and stretch the Brighton front line across the pitch. They also utilised switches of play to try and exploit the wide areas they were being shown towards; these switches could be from deep from the centre-backs, or from full-backs Trent Alexander-Arnold and Andy Robertson further forward.

Out of possession, teams often leave a big switch to the far side and gamble that they will be able to cover the ground as the ball travels. Liverpool have managed to turn this into a genuine weapon, with both Alexander-Arnold and Robertson capable of sending fast-paced diagonal passes from one wing to the other whenever the opposition moves over to press in wide areas.


With the ball wide, Liverpool still looked to try and combine inside. Firmino frequently looked to link play in all areas of the attack, and the Reds used vertical rotation to try and increase spaces between the lines for the Brazilian to exploit. While these rotations can often come in the form of two players moving in opposite directions, Liverpool were often seen using three men. For example, Wijnaldum would look to make a run in behind as Mané dropped towards the ball; both runs would move the Brighton units away from each other in order to create additional space in between the lines for Firmino to receive.

Despite these strategies causing Brighton occasional problems, it was through two set-pieces that Liverpool managed to inflict the decisive damage, with Van Dijk rising twice to head home from Alexander-Arnold crosses. They otherwise lacked ruthlessness in and around the penalty area, with the visitors well organised in defence and goalkeeper Mat Ryan making some good saves.

Graham Potter set Brighton up in a 4-3-3 formation in possession, with Dale Stephens, Davy Pröpper and Aaron Mooy as a midfield three behind Pascal Gross, Yves Bissouma and central forward Aaron Connolly. The visitors looked to be brave in possession by building from the back against arguably the most aggressive press in the Premier League.

Liverpool looked to set a trap in the opening phases, by positioning their front three with Brighton’s deeper two midfielders, Stephens and Pröpper, between them. The hosts then allowed the pass into one of the pair before applying intense pressure, often leading to a rushed pass or turnover.

The visitors looked to take the game to Liverpool, regularly advancing with five points of attack. This would include the front three and any two out of midfielders Mooy and Propper, or full-backs Martin Montoya and Dan Burn. Dale Stephens tended to remain behind the ball as a point of recycle and a guard against counter-attacks. They used Connolly to try and stretch the play by making runs in behind, particularly into the channels, but both Dejan Lovren and Virgil van Dijk were comfortable in shepherding him towards the corners.

Brighton had opportunities in transition to exploit the spaces left by Liverpool, but they were often slow to either secure possession or play forwards – which often led to transitional moments against them as Liverpool regained through their excellent counter-press. This lethargy in positive transitional moments led to the foul for the free-kick that created Liverpool’s opener, for example.

Towards the end of the first half, with a two-goal lead, Liverpool dropped off into a 4-5-1 shape out of possession; Mané and Salah tucked in to the midfield as the hosts simply allowed Lewis Dunk and Adam Webster to have possession in front of them. The visitors still tried to send balls in behind the Liverpool defence, but these attempts created little beyond the unfathomable decision from Alisson to rush out and handle outside his area.

The resulting red card for the Brazilian allowed Brighton a route back in to the contest; as they sent more men forward in search of an equaliser, their usual five points of attack became seven. This saw Liverpool adopt more of a 4-4-1 in the final stages, with Divock Origi leading the line, and Mané and Adam Lallana either side of Henderson and Wijnaldum. The hosts held on, however, and have still dropped only two points in the league all season.