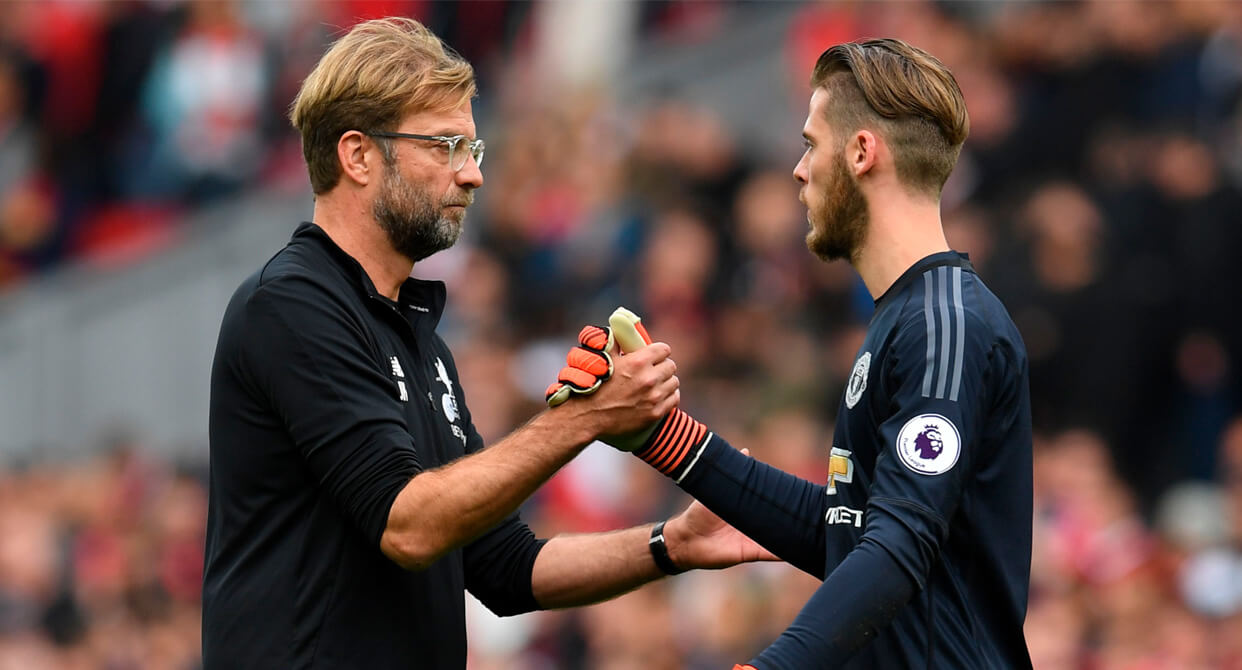 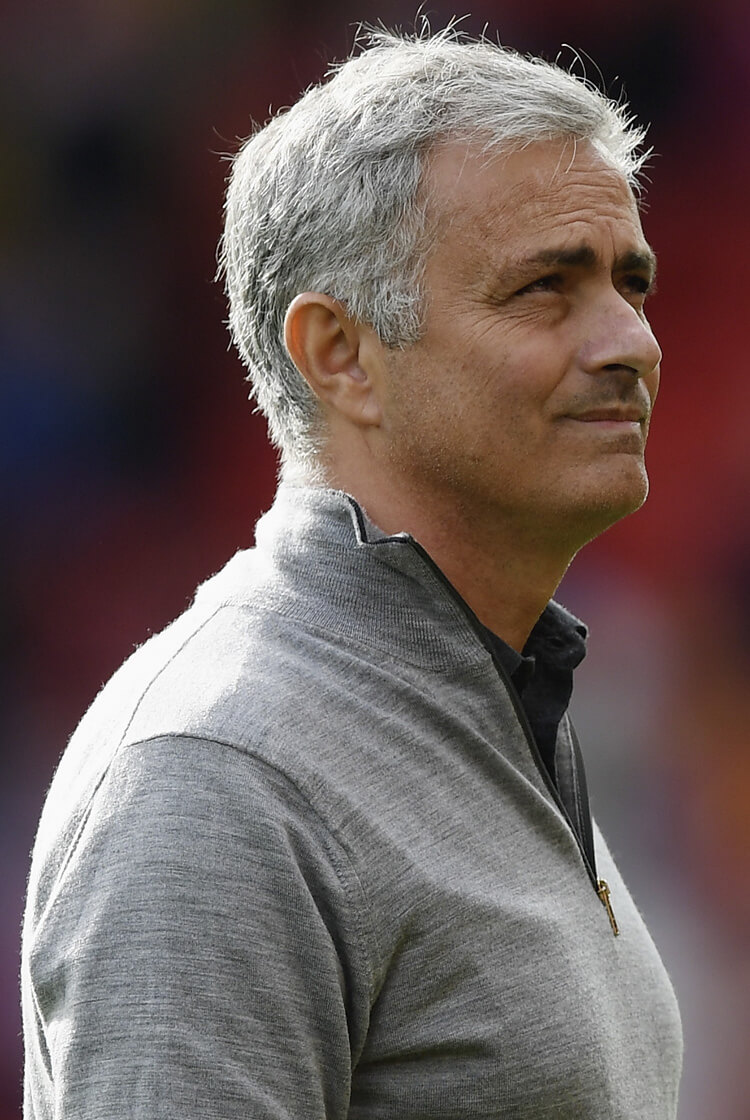 Jurgen Klopp was left still awaiting his first Premier League victory over Manchester United, after this frustrating and ultimately goalless afternoon at Anfield. His Liverpool side dominated both play and possession for long periods, but couldn't find a way past an inspired David de Gea, who pulled off one sensational save from Joel Matip among a host of others. Jose Mourinho's men didn't offer any consistent threat, with an otherwise quiet Romelu Lukaku having the visitors' best chance just before half-time. 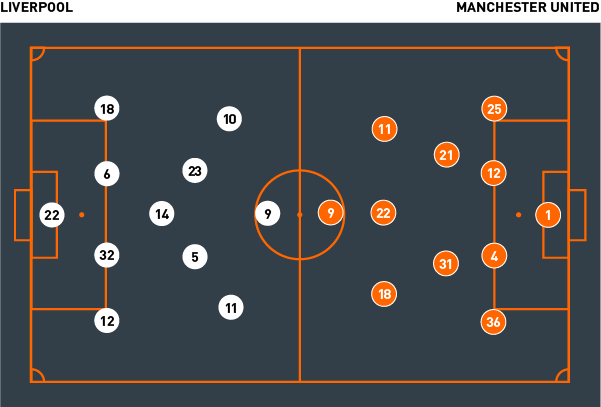 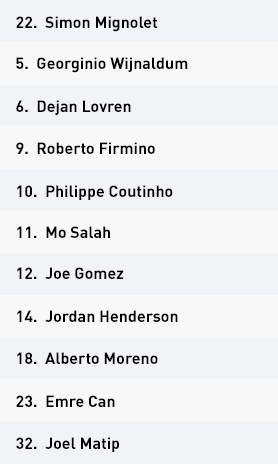 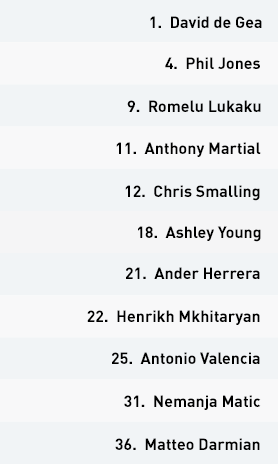 Jurgen Klopp’s Liverpool side began in a 4-3-3 formation, switching to a 4-1-4-1 in defence, with Philippe Coutinho and Mo Salah dropping into the midfield block and Jordan Henderson sitting in behind. If Manchester United tried to play out from the back, the hosts employed a hard press initiated by Roberto Firmino and looked to drive them out into wide areas. Once the ball went to the wings, Liverpool intensified their pressure and tried to win the ball back as soon as possible.

The Reds were solid in midfield and tried to generate a numerical advantage over both the player in possession and potential receivers of the ball. Their midfield trio of Jordan Henderson, Georginio Wijnaldum and Emre Can combined well to prevent possible passes through their defensive unit and always worked to ensure they had numbers around the man on the ball. Their defensive line showed mostly good concentration in front of goal, conscious of the threat of United’s attacking players – although they did allow the visitors to penetrate their last line late in the first half, when Romelu Lukaku could have opened the scoring.

In their defensive transition, Liverpool reacted quickly to get back in shape and press the man in possession. Henderson, the most defensive of the midfield three, was responsible for covering any gaps or imbalances as United looked to break.

In attack, Liverpool looked to build from the back, through goalkeeper Simon Mignolet and the two centre-backs, Joel Matip and Dejan Lovren. The aim was to break through the first line of pressure as quickly as possible and overwhelm the visitors with numbers in midfield, with Coutinho in particular granted freedom to drop into intermediate areas and move across the front line – although a typically strong set-up from Jose Mourinho in these areas countered this effectively.

The hosts also looked to get Can and Wijnaldum making late runs into attacking areas from midfield. This was a particular tactic when they got the ball wide to full-backs Joe Gomez and Alberto Moreno, who could look for their breaks behind the last line of the United defence. It was from one such move that Can, from a Gomez cross, had a golden opportunity to put Liverpool ahead.

On the counter-attack, the Reds tried to use the pace and skill of their attackers to take advantage of momentary imbalances in the United defence and exploit the spaces in behind them. United gave away little in these areas, although Wijnaldum did have one chance from one typical Klopp counter.

Jose Mourinho set his team up in a 4-2-3-1 formation. He switched to 4-4-2 or sometimes a 5-3-2 in defence, where Ashley Young would drop into the back line and help close space in the central areas from which Liverpool can be so dangerous.

If Liverpool tried to play out from the back, United tried to press hard and prompt mistakes – but Romelu Lukaku, who led the press, and Henrikh Mkhitaryan often left holes as the game progressed. Despite this, Mourinho had his midfield well set up to put pressure on their opposite numbers when Liverpool had possession. Nemanja Matic and Ander Herrera in particular proved effective in this area, working hard to prevent the home side passing through their defensive shape.

In front of their own goal, they deployed rearguard action as a priority and were happy to drop deep if necessary. They tried to minimise the space in between the lines, but when Liverpool did create chances they found David de Gea in excellent form – two superb saves, in particular one from Joel Matip, helped his team to come away with a point.

In attack, United targeted their attackers in the opposition half and looked for Lukaku to hold up play for his teammates. Once they had got the ball into the right areas, they were not short of pace and looked for Ashley Young and Anthony Martial – later Marcus Rashford and Jesse Lingard – to make runs in behind the Liverpool defence. Liverpool defended well in the most part, but United always carried a threat from passes in behind and Lukaku could have put them ahead when combining with Martial late in the first half.

Liverpool played it safe in their defensive transitions, making sure to get back into their shape and giving Jordan Henderson responsibility for covering any gaps that Manchester United might find on the counter-attack.

Philippe Coutinho started on the left side of Liverpool’s front three, but was given freedom to play across the front line and drop into intermediate areas. With Henderson sitting, Emre Can and Georginio Wijnaldum were free to supplement the attack with late runs from midfield when the hosts played it wide.

David de Gea was crucial to his team coming away from Anfield with a point. Two particularly special stops stood out, including one with his left foot from Joel Matip.

Jose Mourinho’s game plan rested on his central midfielders pressing their opponents and preventing them from playing through their defensive shape. Nemanja Matic and Ander Herrera were crucial in these areas.

Mourinho also utilised a back five at times, dropping Ashley Young deeper from midfield and closing down spaces in central areas to stifle Liverpool’s potential threat in these areas.