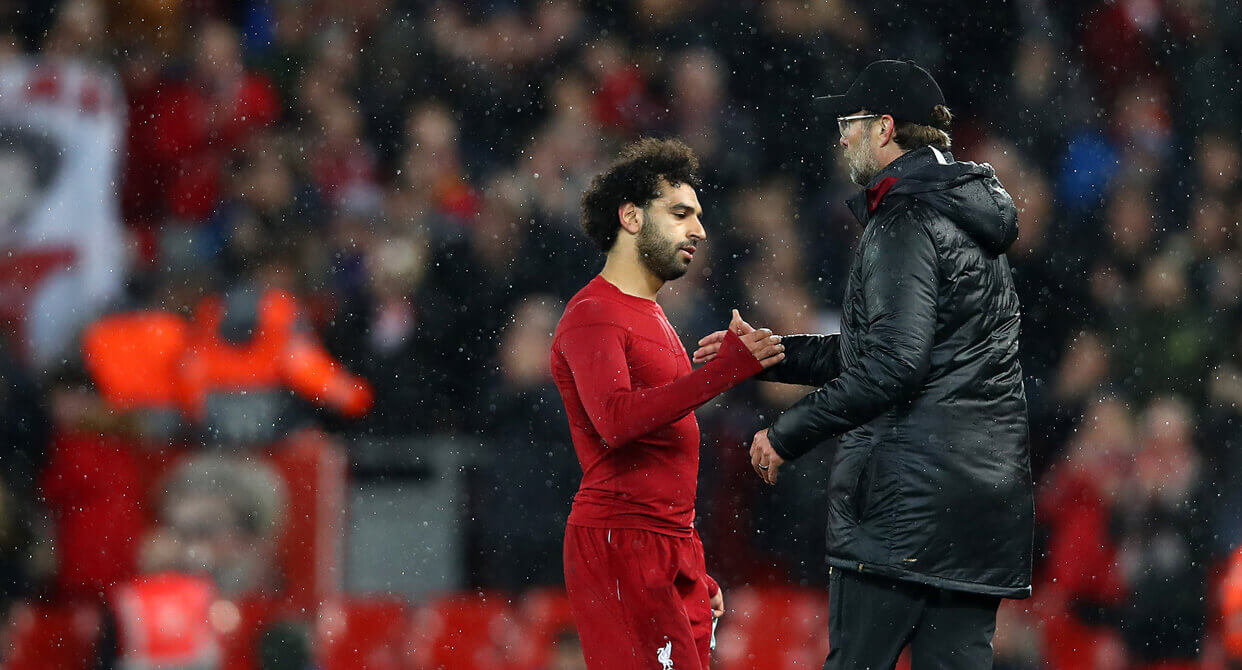 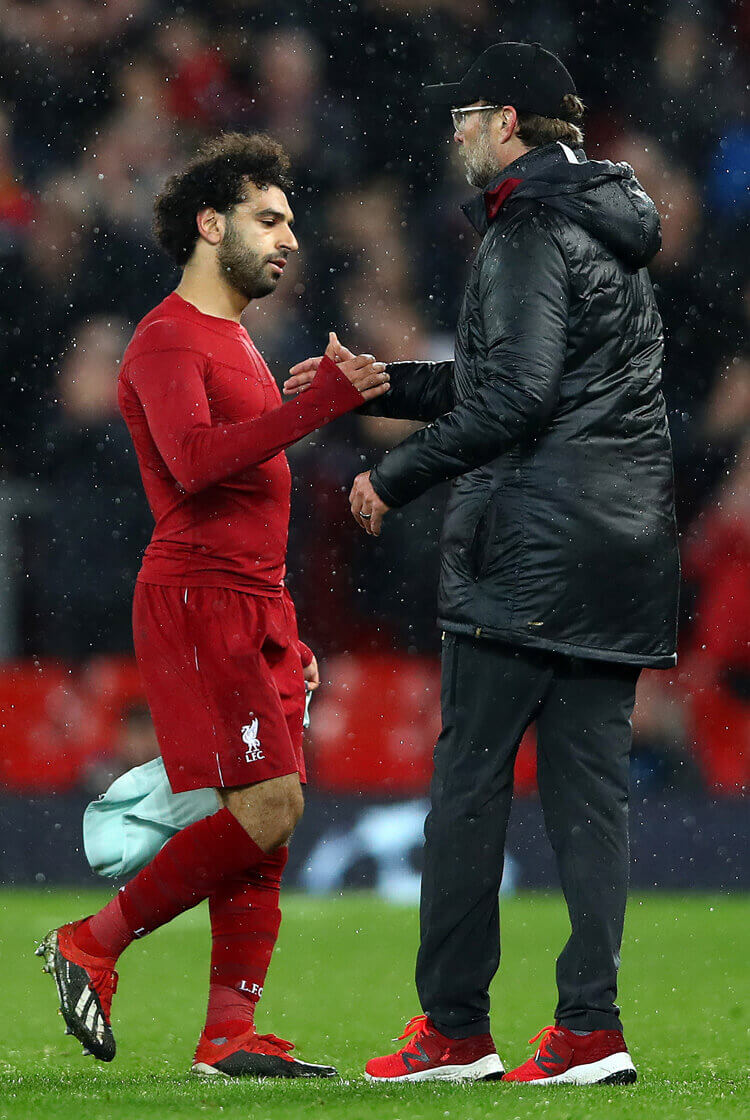 Liverpool were frustrated in their efforts to take control of their Champions League last-16 tie against Bayern Munich, as the German champions put on a defensive masterclass to secure a valuable clean sheet to take back with them to Munich for the second leg. Jurgen Klopp’s men flew from the blocks in their knockout games at Anfield last season, effectively killing off consecutive ties against Porto, Manchester City and AS Roma on their way to the final, but they found an unusually cautious Bayern team a tougher nut to crack. Sadio Mane had perhaps the best chance of the night, but he was off balance on collecting Naby Keita’s mishit shot in the first half, and put his effort wide of Manuel Neuer’s post. The Reds huffed and puffed, but Bayern held firm and return home knowing a win will see them into the last eight. 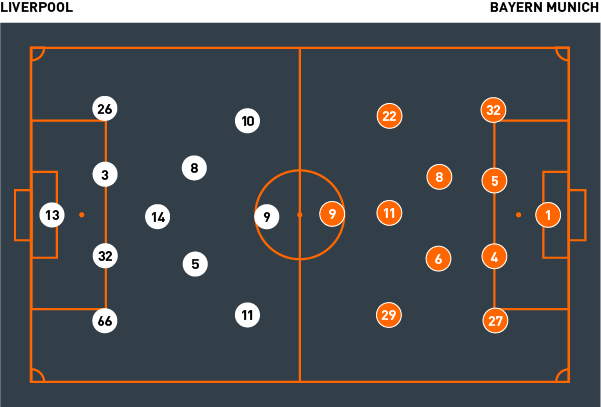 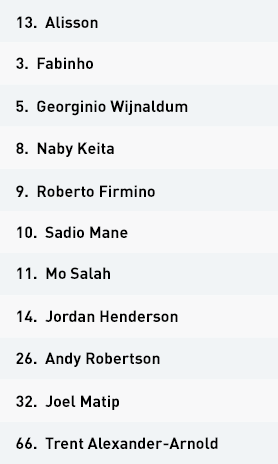 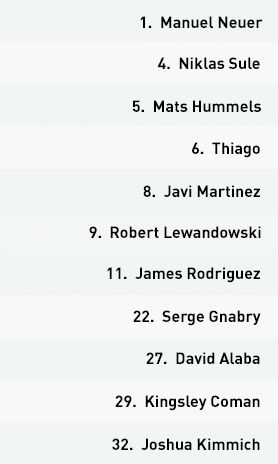 Jurgen Klopp set Liverpool up in a 4-3-3 attacking shape, with Fabinho and Joel Matip forming a makeshift central defence. Jordan Henderson, Georginio Wijnaldum and Naby Keita remained deep and narrow as a midfield three; this condensed Bayern Munich’s mid-block, with Andy Robertson often the safe out ball away from pressure.

Repeated inside movements from Sadio Mane on the left set up diagonal forward passes from Robertson, from where the Senegalese attacker could then link with Roberto Firmino in the central lane. On the right, Mo Salah remained as wide as possible for as long as possible, hoping to horizontally stretch Bayern’s back line and create gaps for balls in behind. Liverpool’s back line often looked for these direct movements, but the space was intelligently reduced by Bayern’s back line throughout.

Eventually, one of the three central midfielders took up a higher role in front of a double pivot. Dropping movements towards the ball from either Firmino or Mane helped rebalance the numbers in central midfield, with either Wijnaldum or Keita moving the opposite way. This dragged Bayern’s man-marking scheme out of shape, creating gaps for central penetration in behind their midfield.

Having created a number of chances but not found a breakthrough in the opening period, the Reds’ central rotations continued in the second half, with Firmino the most likely of the front three to drop towards the ball. In order to push Robertson higher, Keita moved into the back line to cover the full-back. This pushed Mane even further inside, where he accompanied Firmino between Bayern’s lines. Wijnaldum continued his runs forward away from the ball on the right, hoping to push and drag Bayern’s back line deeper, thus freeing up more space for Salah.

As a result of Bayern’s conservative approach in possession, however, Liverpool struggled to penetrate either on the transition or during open play. If Salah or Mane did manage to beat their men, another Bayern defender appeared to nullify the threat. In the end, a cagey affair concluded with neither side really creating many clear-cut attacks.

Out of possession, Liverpool started in a 4-3-3 mid-block structure – but, due to Bayern’s double pivot in midfield, they sometimes formed an asymmetrical 4-4-2. Mane would move inside to help Firmino block central access into Bayern’s deeper playmakers, while Salah stayed right to block access into David Alaba. This only happened when the hosts looked to press higher into Bayern’s half, however.

The positioning of Salah and Mane in the 4-3-3 helped cut out Bayern’s effective short build-up, as they blocked access from centre-back to their respective full-back. From here, goalkeeper Manuel Neuer in particular built with aerial passes into the full-backs, where Liverpool were able to press with Keita and Wijnaldum.

The hosts’ much higher starting position in the second half, particularly on goal-kicks, forced Bayern into longer builds from deep. However, if they won the first contact, the visitors would then work the ball backwards to extend their time in possession and resume their short build. That meant more clipped balls over Liverpool’s first pressers, but Bayern’s wingers then dropped to give both Alaba and Joshua Kimmich an extra passing option away from Liverpool’s pressing midfielders. Even lone forward Robert Lewandowski dropped to link play, as Bayern prioritised possession over progression – they sacrificed numbers in forward areas to ensure Liverpool were unable to steal the ball high.

Bayern Munich set up in a 4-2-3-1 formation, and tried to build with short passes from goalkeeper Manuel Neuer in the opening exchanges. They tried to draw Liverpool’s front unit into a high press, hoping to then bypass them with clipped balls over or splitting central passes into James Rodriguez as the central number 10 behind Robert Lewandowski. Whenever Liverpool sat off, they worked the ball into midfield and then looked for more direct balls over the hosts’ full-backs and into the wide areas.

Thiago’s superb switch out to former Arsenal midfielder Serge Gnabry was a prime example of this, with the latter beating Andy Robertson and crossing for Robert Lewandowski in the game’s first real opening – although goalkeeper Alisson came to the rescue after the ball flew off Joel Matip instead. Bayern did show occasional glimpses of their overlapping prowess in the first half; both full-backs, David Alaba and Joshua Kimmich, moved forward, with Thiago and Javi Martinez able to drop in to cover if Liverpool countered at pace.

That said, the visitors rarely committed to attacking moments and often played backwards – once, even after having got in behind Liverpool’s midfield. Left-sided attacker Kingsley Coman was perhaps Bayern’s most direct player in possession, as he sought to attack Trent Alexander-Arnold where possible. Both Coman and Gnabry lacked consistent overlaps from their full-backs, though, while a lack of central runners ensured Bayern’s attacking play was vastly underloaded, and chances few and far between. Despite a couple of overlaps in the second half, the visitors were evidently wary of the threat Liverpool could carry on the break.


Off the ball, Bayern set up in a 4-4-1-1 defensive shape that left as small a space as possible in behind a defence that couldn’t realistically have coped with the pace of Mane and Salah. However, their block was such that it still enabled pressure in midfield – the visitors duly negated the fast start Liverpool so often bring to Anfield on big European nights.

The defence’s failure to win second balls brought a consistent amount of pressure in the first half, and Liverpool did threaten on occasion. But the extra security provided by the double pivot of Thiago and Javi Martinez, plus the conservative positioning of their full-backs, meant Bayern always had the numbers to congest spaces around the penalty area and frustrate the hosts.

Bayern’s reserved attacking approach ensured Liverpool’s transitional attacks in the second half were also limited. The higher press from the hosts forced Neuer to play over them, but rather than creating any form of expansive attacking shape, Bayern kept their back line intact at all times. Few attacking overlaps from Alaba or Kimmich meant that, even if the visitors lost possession in their build, their defensive block was in effect already formed. Perfectly managed distances across the defensive unit minimised the opportunities for Mane and Salah to run in behind, and eventually saw the German champions secure the clean sheet that probably makes them slight favourites ahead of the second leg in Munich in three weeks.