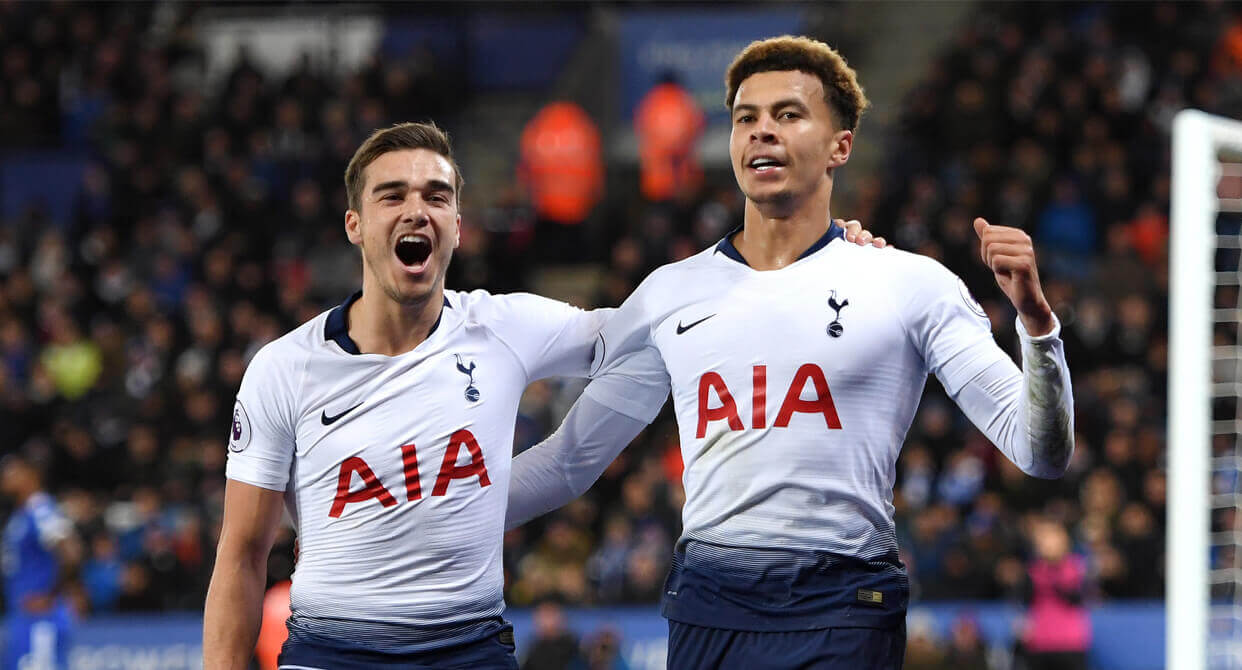 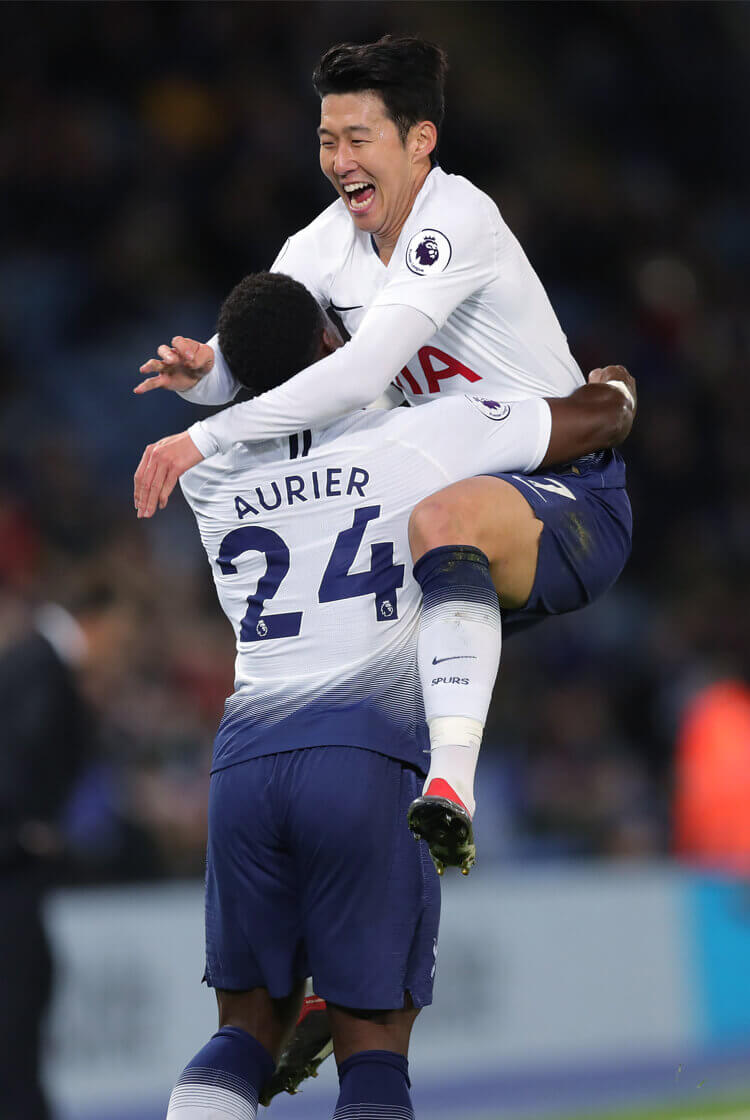 Son Heung-min and Dele Alli were the men on target as Tottenham eased to victory over Leicester in the late Saturday kick-off at the King Power Stadium. Mauricio Pochettino opted to rest key players Harry Kane and Christian Eriksen ahead of the trip to Barcelona on Tuesday, and Spurs had to be patient in their attempts to unlock the hosts’ defence. Son eventually broke the deadlock on the stroke of half-time, cutting in from the right before superbly curling the ball into the far corner from 25 yards. Alli then confirmed the three points with a header at the back post shortly before the hour mark. The result lifted Tottenham back into third place, while Leicester sit in ninth. 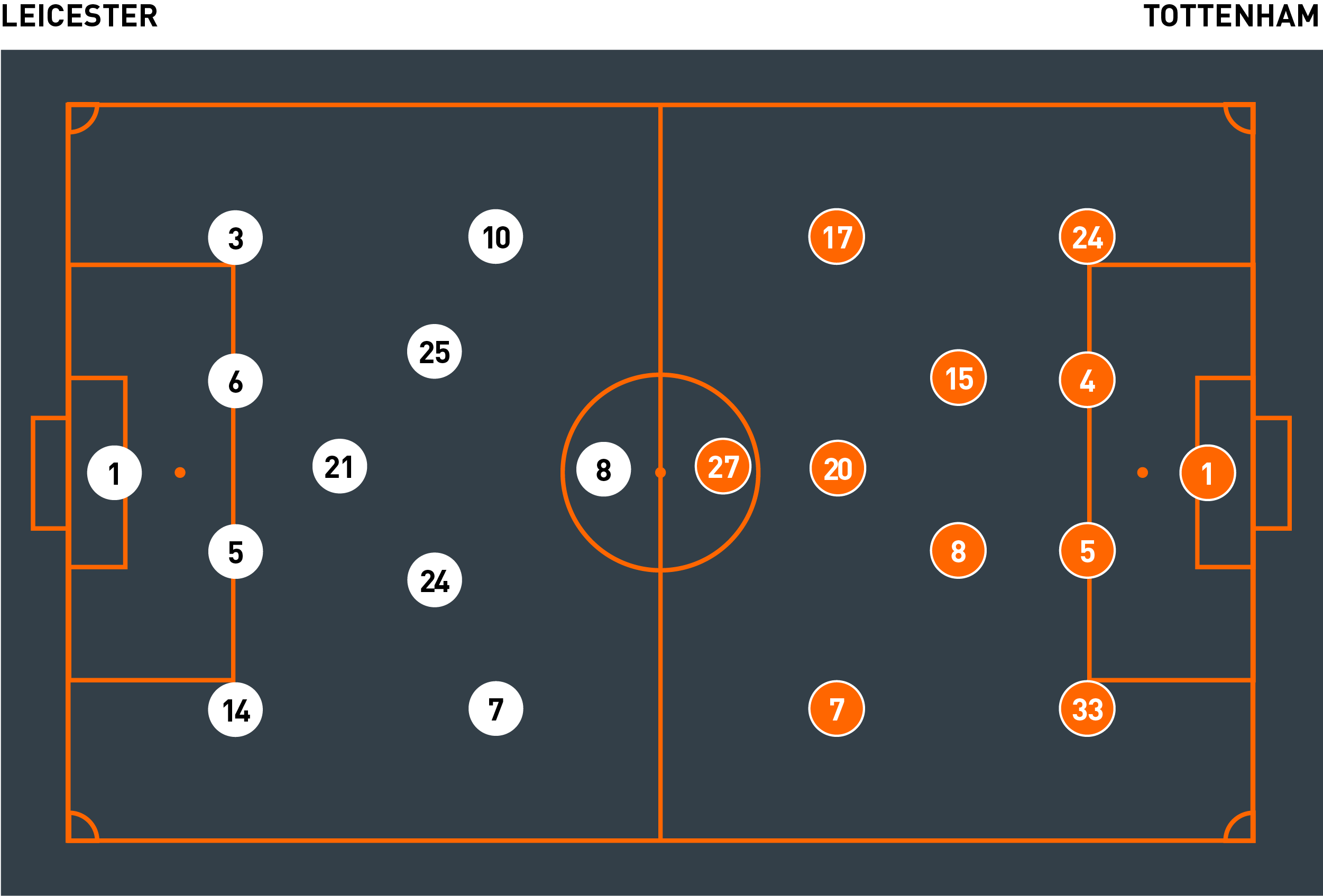 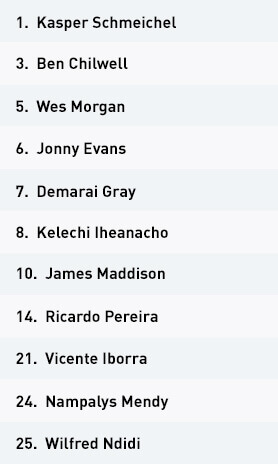 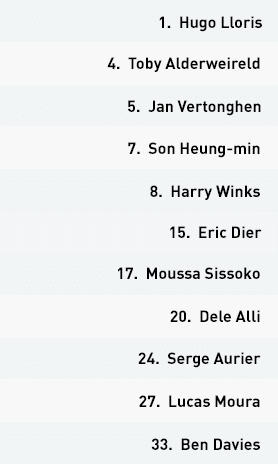 Leicester began the match looking for long balls in behind Tottenham’s defensive unit. With Spurs forming a mid-block and playing a very high defensive line, they tried to play early balls over the central defence, looking for lone forward Kelechi Iheanacho to outrun Jan Vertonghen or Toby Alderweireld. However, the central base from these passes forward allowed goalkeeper Hugo Lloris to collect or sweep up the danger.

In slightly adapting the starting point of these passes, the Foxes did eventually work the ball into the final third. Rather than the midfielders looking to play in behind straight away, Vicente Iborra dropped even deeper into the back line, drawing the Spurs attackers away from their central defenders. Deeper players in the back line now played the passes in behind, with a more effective change of angle – this took Lloris out of the equation, enabling wide attackers James Maddison and Demarai Gray to move forward.

With little to show for their efforts, Maddison soon drifted infield from the left – most notably when the central midfield regained possession or looked likely to. The hosts now had a brief central overload after winning the ball and had an immediate forward pass to hit. Ben Chilwell could support from left-back for the first time in the match, as the focus switched to this side. Moussa Sissoko also posed less of an attacking threat than Dele Alli and Son Heung-min on the opposite side – should Leicester lose possession on their left, Chilwell’s advanced position wasn’t really exploited.

Second-half changes from head coach Claude Puel saw an increase of pressure on to Spurs’ back line. Maddison, Demarai Gray and substitute Marc Albrighton tried to rush the visitors’ defenders into mistakes on the ball – however, their calmness ensured total control of possession within their half.

Leicester’s most effective spells of pressure came when the wingers directly attacked their opponents’ back line at a time when their full-backs were trying to recover into shape. But even as they surged forward, the hosts were lacking in quality final balls to unlock an alert and well-organised defence.

Without the ball, the Foxes formed a 4-1-4-1 mid-block, with Iborra protecting the central spaces between the lines. The priority was on vertical compactness and stopping Spurs from combining in the central lane. They tried to force the play into wide areas, with a reduced intensity of press once the ball had reached the channels. Knowing they couldn’t compete against a tough central defence, Spurs repeatedly moved back inside with the ball and Leicester frequently regained possession back in their own half.

A much higher starting position from the front line forced Spurs and Lloris to kick longer, rather than playing out as they set up to do. The midfield rarely won the first or second ball from Lloris’ longer kicks, though, and the visitors soon took control of the game.

With this higher starting position, the back line had to step forward to maintain the team’s overall compactness. This created much more space in behind, and Spurs started to look to play more directly over Leicester’s block. With various runners penetrating in behind, the Foxes soon converted back into a deeper block, aiming to see the first half out. But Son Heung-min’s superb long-range effort put the visitors ahead seconds before the interval.

Leicester once more deployed an aggressive pressing game on Spurs’ midfield unit in the second half, but this was bypassed with deft chipped passes over the first line of pressure. It was individual errors that led to the majority of the visitors’ second-half chances, though, with the ball often needlessly given away in midfield. The second goal came as more inaccurate passing set Spurs free to swiftly punish the hosts on the break.

Leicester’s pressing intentions continued late in the game, with Gray and Maddison the most effective pressers. Their ability to pinch the ball as individuals came into good use in stopping Spurs from dominating the ball and adding to their tally. In the end, though, neither player could threaten the visitors’ goal as the Foxes fell to a disappointing home defeat.

Mauricio Pochettino set his Tottenham team out in a 4-2-3-1 attacking structure, but Eric Dier would drop out of their double pivot during longer spells with the ball to form a back three with Toby Alderweireld and Jan Vertonghen. Harry Winks then became the single pivot, with Dele Alli dropping deeper when Leicester committed more players to a higher press.

Lucas Moura started as the sole central striker, but he had limited space in behind to stretch the hosts’ central defenders. Should Spurs win the ball within their own half and look to counter-attack quickly, though, the Brazilian’s speed was ideal for transitional moments.

With Leicester eventually moving their defensive block higher, especially at goal-kicks, Moura was soon afforded more space to run in behind. But in repeatedly performing the same run, the hosts’ back line began to predict this pattern of play. Noticing this, Alli took up excellent central positions to capitalise on the increasing gap between midfield and defence. Additional runs from Son gave Spurs extra penetration, as they quickly turned midfield possession into final-third penetration.

Moura started to alternate with Alli, dropping short from his high starting position as Alli then ran beyond. Leicester soon reorganised and moved back into a deeper block to see the first half out, but just as it was coming to an end, Son sent an excellent curled effort from 25 yards into the far corner. Despite the Foxes’ compact shape, a failure to close Son down allowed Spurs to go in one up.

Dier continued to drop into the back line in the second half, but prioritised moving in between the two centre-backs, rather than around the sides. Alli and Sissoko then formed an advanced central midfield partnership ahead of Winks, with Serge Aurier and Son providing the attacking width – this helped Spurs bypass the Foxes’ increasingly aggressive press.

The crucial second goal came as Alli powered home a header at the far post from Son’s deep cross. The move stemmed from a simple and direct counter-attack, as the hosts lost possession with seven players ahead of the ball.

The introduction of Christian Eriksen saw an increased attacking involvement from left-back Ben Davies. Eriksen and Sissoko permanently moved infield when building through midfield, leaving both full-backs to provide attacking width. This also coincided with a brief spell of positive attacking play from Leicester, whose wingers surged forward through the enhanced spaces in the wide areas.

Tottenham set up with a defensive mid-block, but their back line was much higher than their opponents. Naturally, Leicester looked for long balls over this block, although these posed little threat to the defence. Spurs initially allowed the hosts to maintain possession along their back line, but as they grew dominant, the advanced attackers began to aggressively step forward. Son and Sissoko stepped on to the full-backs, while Alli and Moura rushed the central defenders. The attacking unit set out to force play inside, where Winks and Dier would be waiting to join the press.

Spurs only looked defensively vulnerable when James Maddison moved inside to create a central overload. But despite working the ball past Tottenham’s aggressive press, Leicester then lacked invention and creativity in the final third. With Kelechi Iheanacho and Demarai Gray also moving into a narrow attacking structure, Spurs simply condensed the central lane, where their opponents again lacked the quality to play through.

The visitors stayed in their defensive mid-block long after grabbing the second goal. Alli continued to support Moura as the highest two pressing attackers, but there was a noticeable reduction in aggression – particularly as goalkeeper Kasper Schmeichel played short passes into his back line.

Spurs intelligently invited Leicester to carry the ball up the pitch from deep knowing they would find it extremely difficult to play through such a compact unit. They would eventually regain possession before attacking the enhanced spaces left by their opponents, who tried – but ultimately failed – to get something out of the game.