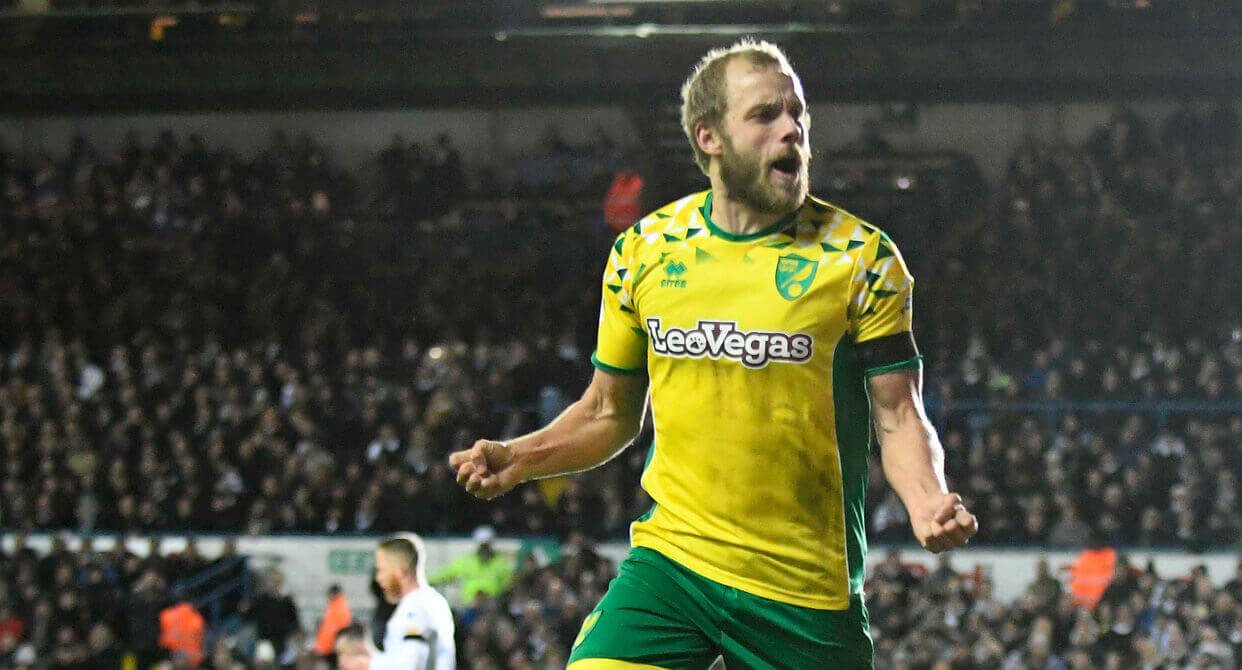 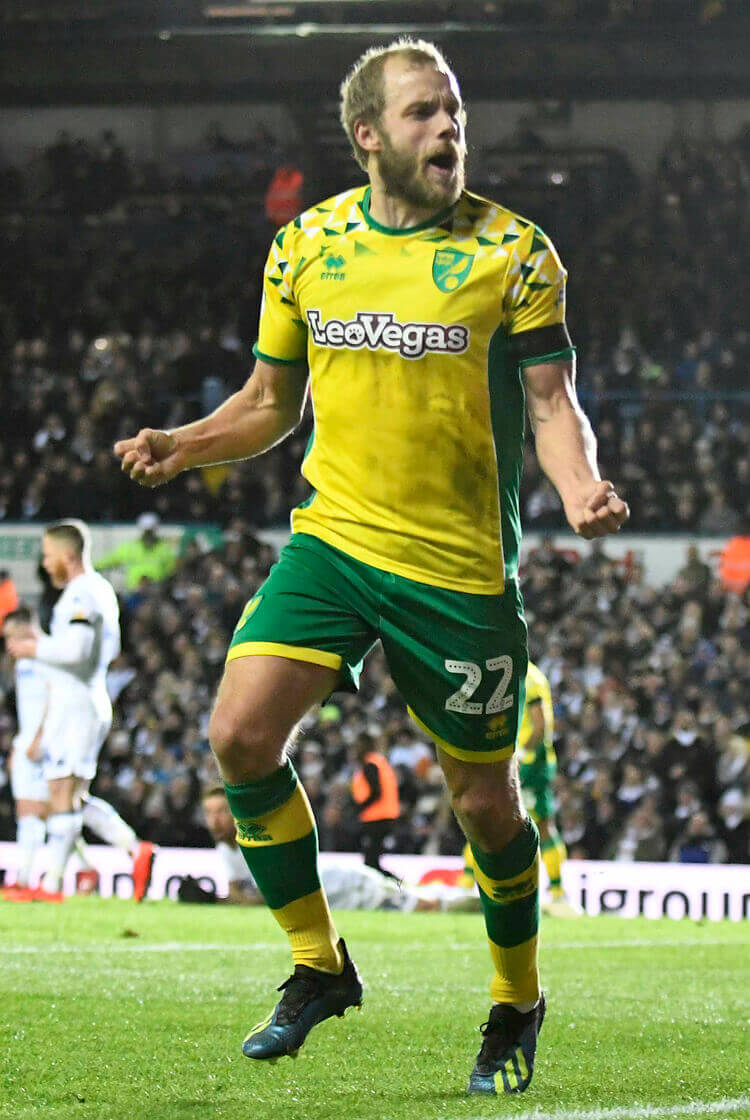 The meeting of the Championship’s top two teams went the way of the visitors at Elland Road, as Norwich City got the better of Leeds United to usurp the hosts at the top of the table. Marcelo Bielsa’s men were quick out of the blocks, but still fell behind to an early free-kick from Norwich midfielder Mario Vrancic. The Canaries doubled their lead before half-time, when Teemu Pukki was the only player to react to a rebound in the Leeds area, and extended it still further when Vrancic netted his second with quarter of an hour left. Substitute Patrick Bamford grabbed a consolation in stoppage time, but it was too little too late for Leeds as Norwich regained top spot with 16 league games to go. 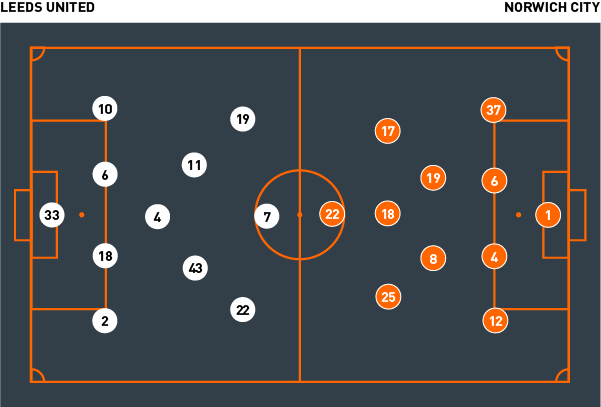 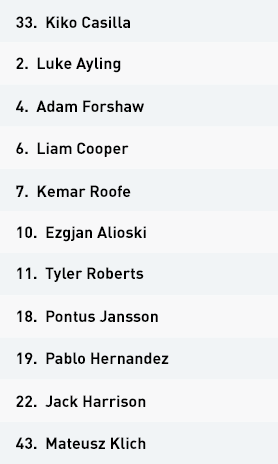 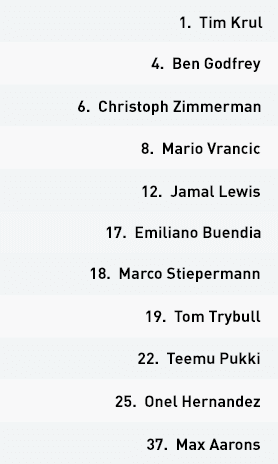 Marcelo Bielsa set Leeds United up in a 4-3-3 attacking structure, with single pivot Adam Forshaw the key link between defence and midfield. Forshaw took up a position between and behind Norwich City’s pressing front two, with both full-backs – Ezgjan Alioski and Luke Ayling – providing the width to horizontally spread the visitors’ first line of pressure.

Central forward Kemar Roofe dropped towards the ball from a higher starting position, joining Tyler Roberts and Mat Klich to create a three-on-two overload in the central channel. With both full-backs high and wide, wingers Pablo Hernandez and Jack Harrison moved inside to attack the areas between the Norwich centre-backs and full-backs. The hosts were only able to create half-chances, however, and reacted by pushing more players into the final third. While this helped going forward, it also afforded Norwich larger gaps through which to counter-attack.

Two goals down at half-time, Leeds’ intensity in possession actually dropped in the second half. Substitute Jack Clarke showed glimpses of attacking flair from the right, but the hosts committed fewer players forward, perhaps concerned about the counter-attacks from which Norwich had caused problems in the first half. Bielsa reacted by bringing on Patrick Bamford to play alongside Roofe in attack, but the pair often made similar runs in behind as impatience grew both on the pitch and in the stands – particularly as Norwich scored a third with little over 10 minutes remaining. Bamford did pull one back in added time, heading in from a corner – but the damage had been well and truly done by then.

Without the ball, Leeds defended using a 4-1-4-1 structure, with an intense man-marking structure across the pitch. They would follow their man everywhere, even if it meant travelling far from their defensive position. Right-back Luke Ayling was a perfect example of this, consistently following Norwich’s left winger Onel Hernandez all the way back into his own half.

With Leeds getting more desperate as the first half wore on, they threw both wingers and full-backs forward in wide areas. When they lost possession, however, this gave Norwich larger gaps to exploit with quick and direct counter-attacks from deep.

In the second half, with Norwich making more use of their full-backs to attack around Leeds’ compact central structure, the hosts’ wingers had to recover back into deeper positions. From here, Norwich could manage the ball better, which frustrated the home side’s attempts to find a way back into the match.

Daniel Farke set his Norwich City team up in a 4-2-3-1 formation, and attempted to play out from goalkeeper Tim Krul against Leeds’ high-pressing unit. They took an early lead through midfielder Mario Vrancic’s free-kick, but with the hosts dominating possession they failed to establish any real spells of their own. Lone forward Teemu Pukki intelligently drew fouls to relieve the pressure on his defence, allowing them to build with short passes without the risk of losing the ball near their own goal.

The Finnish striker became more isolated as the half wore on, making it harder for Norwich to get it forward after a regain. Against the run of play, however, Leeds pivot Adam Forshaw was robbed by Emiliano Buendia deep in his own half – Vrancic’s low drive was blocked, but Pukki was quickest to react and slid the ball home to extend Norwich’s lead.

With Leeds now forced to chase the game, the visitors were able to play on the counter-attack. With more space to attack on the break, Norwich could escape the Leeds counter-press and again use Pukki as a crucial forward link – particularly if avoiding the hosts’ covering trio in central midfield.

In the second half, full-backs Jamal Lewis and Max Aarons moved much higher with the ball, pushing the Leeds wingers back and, if they beat their man, engaging the hosts’ defensive line too. By making the wingers do more defensive work than they would have liked, they were able to maintain longer spells of possession and control the game more than they had in the first half. It was through more excellent work by Lewis down the left that the visitors engineered their third, and Vrancic’s second, late on.


After beginning with a high back line, Norwich converted into a 4-4-1-1 defensive structure, but failed to stop Leeds consistently building into midfield. Pukki and Marco Stiepermann tried to block off Forshaw, but with the hosts’ back line so far spread, Leeds were able to play around Norwich’s first line of pressure. From here, the away side gradually moved into a mid-block, as they looked to contain the home side’s attacking threat.

Norwich struggled to contain the movements in and around their double pivot, as Tom Trybull and Vrancic were unable to press the ball-carrier and block off the forward passing options into the likes of Kemar Roofe and Pablo Hernandez. The back line narrowed, to deal with inside movements from the Leeds wide attackers and block off central passing lanes – this forced the hosts wide, where full-backs Aarons and Lewis were as impressive in their defensive roles as they were going forward.

In the second period, Norwich’s central midfield duo dropped deeper and deeper – especially as Leeds finished with two central strikers in Roofe and Patrick Bamford. This opened up the wider areas for Leeds once more, but Norwich defended any subsequent crosses well – despite conceding a late goal, the visitors were comfortable winners in what could prove a season-defining win.