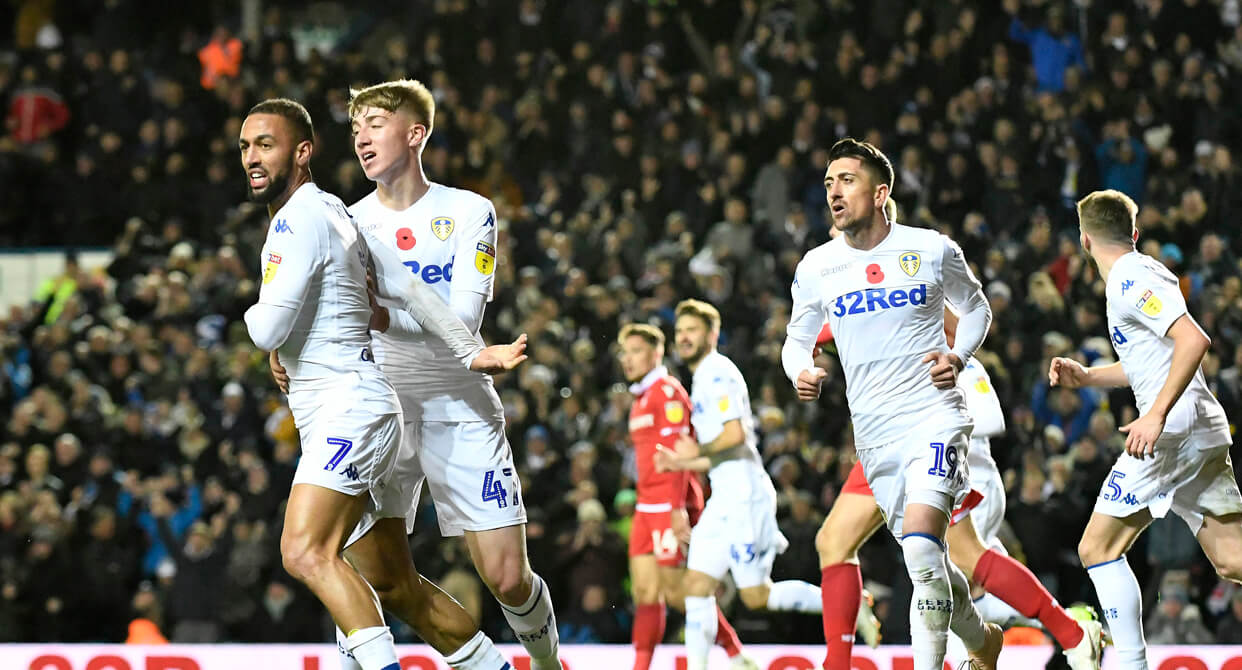 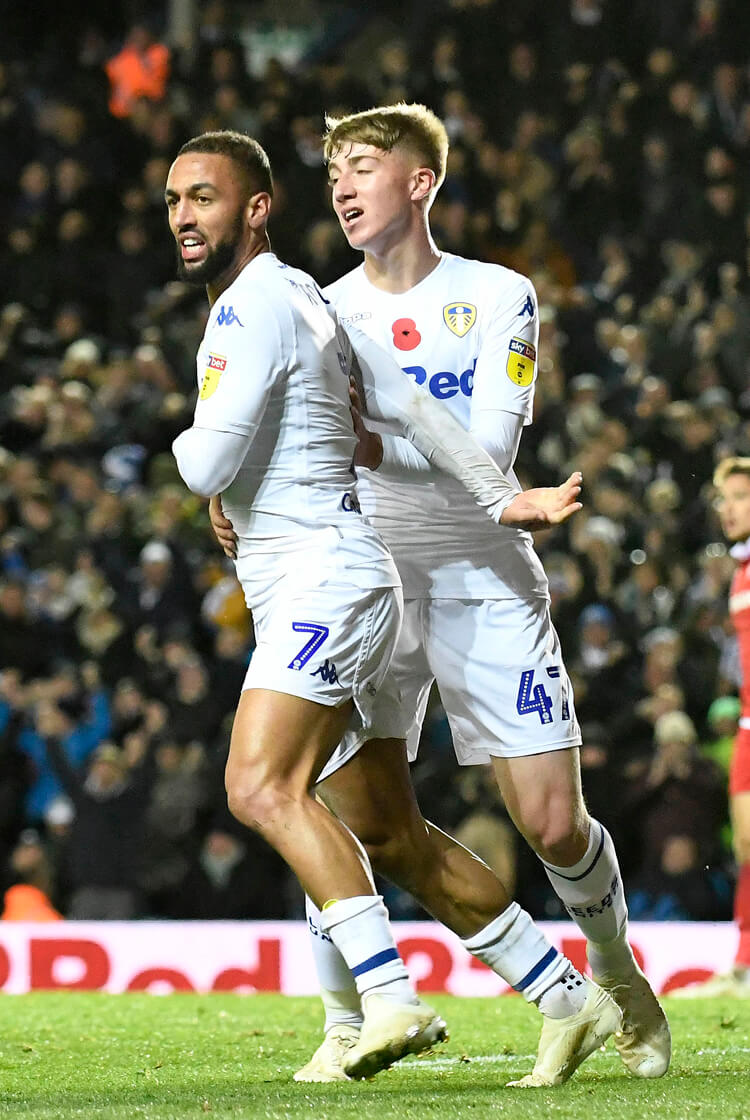 Leeds and Nottingham Forest took a point apiece from a Championship encounter that featured a controversial late equaliser from the home side. Jack Robinson had given Forest the lead with a header from a corner-kick in the 11th minute, and they looked set to take home all three points before Kemar Roofe’s late equaliser. Roofe met the cross of Mateusz Klich to draw his side level, but the visitors were furious with the officials’ failure to spot that the ball had clearly gone in off the striker’s forearm. The draw took Leeds into second in the table, two points behind leaders Sheffield United. 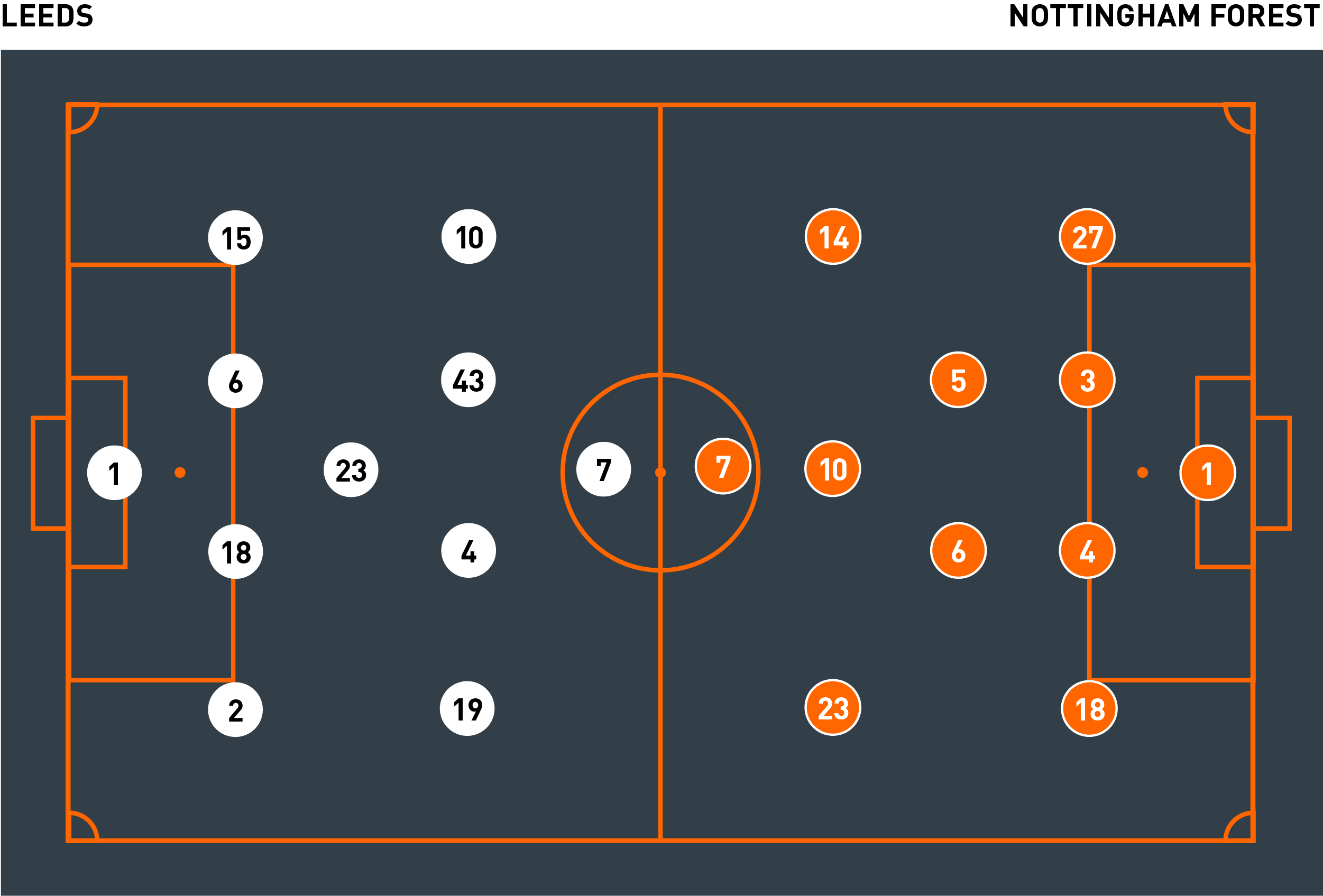 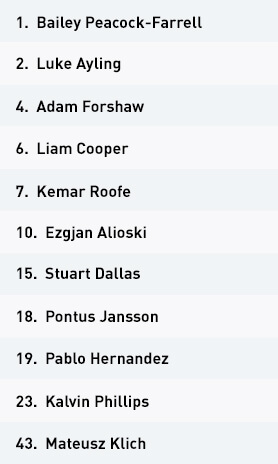 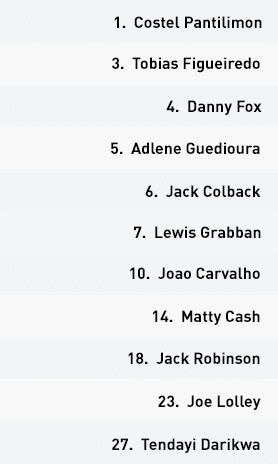 Head coach Marcelo Bielsa made three outfield changes and converted from a back three into a back line of four after Leeds’ midweek victory over Ipswich Town. Pontus Jansson and Stuart Dallas were recalled into defence, with Adam Forshaw returning in central midfield.

Leeds began the match controlling possession. Right-back Luke Ayling was a focal point of their early play, with his one-two combinations and inside movements with right-sided partner Pablo Hernandez enabling progress from deep. His inside runs also helped create a four-on-three overload in central midfield.

Despite going behind in the 11th minute, the hosts were dominant in possession – but during moments of transition rather than prolonged spells with the ball. Hitting Forest in the central lane as they converted into their defensive shape proved a successful route to goal, with Mateusz Klich linking well with lone forward Kemar Roofe.

They began to attack with more direct final-third entries and final passes as the first half progressed. Taking advantage of the larger central space in between the lines, the midfield utilised through balls for Roofe to attack, while Ezgjan Alioski came in from the left. Clear-cut attempts remained few and far between, despite this new strategy to attack.

An injury to right-back Ayling forced Bielsa to make a change, as the attack-minded Stuart Dallas moved across to the right side while Tom Pearce came on at left-back. Frustrations in attack continued, though, with unrealistic long-range attempts from distance the best their attacking unit could muster.

The frustration continued into the second half, when poor decision-making was as much to blame for their lack of quality going forward as tactical failings. Bielsa reacted with two further changes – Jack Clarke and Samuel Saiz were introduced to increase the tempo and rhythm, particularly within the final third. The directness and speed of Saiz with the ball added to the hosts’ threat, and his link-up with Clarke created a number of crossing opportunities. Uncharacteristically, Leeds lacked bodies running in behind to attack the teasing deliveries.

Saiz’s positioning, along with Hernandez between the lines, created constant pressure. But as both remained close to one another for quick combinations, they simultaneously blocked off access into Roofe ahead of them. The lone forward consequently began to drop away from Forest’s back line, becoming more active in the build – but this took away presence in the penalty area.

Eventually, a low cross brought the equaliser eight minutes from time. Klich again managed to recover the ball back across goal and Roofe controversially turned the ball over the line with what appeared to be his arm. It wasn’t spotted by the officials, and the hosts went on to create a final chance to win the game, as a deft flick from Hernandez rolled inches past the post.

Defensively, Leeds looked reasonably comfortable in the opening exchanges, as their pressing rushed Forest into quicker play. That said, their ability to recover possession quickly was helped by their opponents’ lack of control and reliance on direct balls forward. They will have been disappointed at their failure to defend a routine corner in conceding the opening goal.

Their 4-1-4-1 structure was rarely asked to remain in a constant defensive shape, as Forest’s lack of prolonged possession continued well into the second half. The curved runs of Lewis Grabban away from the central lane was a problem, however, particularly as the high positions taken up by Leeds’ full-backs left space down the sides of the two central defenders. Grabban had to be tracked by a central defender, meaning either the ball-side full-back or deep-lying midfielder Kalvin Phillips had to fill in temporarily at centre-back. Fortunately, neither Forest nor Grabban targeted crosses at the covering defender.

Head coach Aitor Karanka made two changes to the Nottingham Forest side that beat Bolton Wanderers in their previous Championship fixture. Sticking with a 4-2-3-1 structure, he brought Danny Fox in for Michael Dawson in central defence, while Matty Cash replaced Gil Dias in midfield.

Forest often gifted Leeds possession, as they started the game by looking for early balls in behind their opponents’ back line. Even when the space to do so was minimal, the defence and midfield still looked to play the ball forward immediately after a regain. Lone forward Lewis Grabban cut a frustrated figure, with direct balls forward giving him little chance of linking the play or playing an active part in the match.

The visitors did occasionally demonstrate moments of calmness and intelligence on the ball when Jack Colback dropped in between the two central defenders, acting almost as a single pivot. Colback and his defensive teammates could then draw the hosts’ forwards into a central press; centre-backs Fox and Tobias Figueiredo maintained narrow supporting positions to create easier passing angles out to the full-backs.

Despite breaking the first line of pressure, the midfield continued with long balls in behind, hoping to win throw-ins and corners from clearances away. And it was from a corner that Forest took the lead. After overloading the near post, a deep delivery was met by the diving head of Jack Robinson, who beat Stuart Dallas to the ball.

After scoring the opener, Forest continued to send long balls forward. Grabban tried to move away from the central lane to find a more realistic chance of securing the ball against two central defenders. Opportunities to diagonally switch the play were created, as both wide attackers provided runs forward for the first time. Matty Cash’s right-sided runs from a wider starting position tested the hosts’ replacement left-back Tom Pearce, as Forest made progress during moments of transition.

Grabban continued with his curved runs into the second half, sometimes drawing both central defenders across to the inside channel or wide area. But the forward’s movements in attempting to convert these balls into effective crosses or passes were let down by a lack of awareness from his supporting teammates in potentially dangerous positions.

Forest’s final-third entries were also reduced by Joao Carvalho’s struggles in possession – this not only reduced their attacking threat, but also created pressure on their own back line, with Adlene Guedioura starting to make supporting runs forward from deep midfield.

The visitors set up in a 4-2-3-1 mid-block out of possession, but they often struggled to convert into their desired defensive structure during moments of transition. With Colback dropping deeper in possession, it was difficult for the midfield in particular to simultaneously convert into their 4-2-3-1 and apply pressure to Leeds’ fast-passing midfield unit.

Once defensive unity was restored in midfield, central penetrations from the hosts reduced in frequency. As Leeds looked to more direct final-third entries themselves, Forest’s central defenders were more exposed to the pace of Kemar Roofe, Ezgjan Alioski and Pablo Hernandez in behind. The entire outfield collection responded by dropping 10 yards as the first half drew to a close – this not only created a more compact defensive block, but also reduced the space available to Leeds in behind.

Forest stepped up their pressing intentions in the opening spell of the second half. Guedioura stepped higher out of the double pivot with Colback and on to Leeds’ dropping central midfielders – but this again created spaces for the hosts’ midfield to attack in the central lane. The introduction of the experienced Michael Dawson restored the stability of their central unit, but they remained under pressure from opponents desperate for an equaliser.

The visitors were struggling to contain the hosts’ low crosses, particularly after a switch of play – and Jack Clarke and Pablo Hernandez were causing problems in one-on-one situations against the full-backs. Leeds eventually converted from one of these deliveries, as Roofe bundled the ball home at the far post from a Klich cross. Forest saw out the contest in a 4-4-1-1, leaving Grabban and Carvalho to chase down any clearances. In the end, despite feeling aggrieved at the goal they did concede, Forest did enough to hold on to a valuable away point.