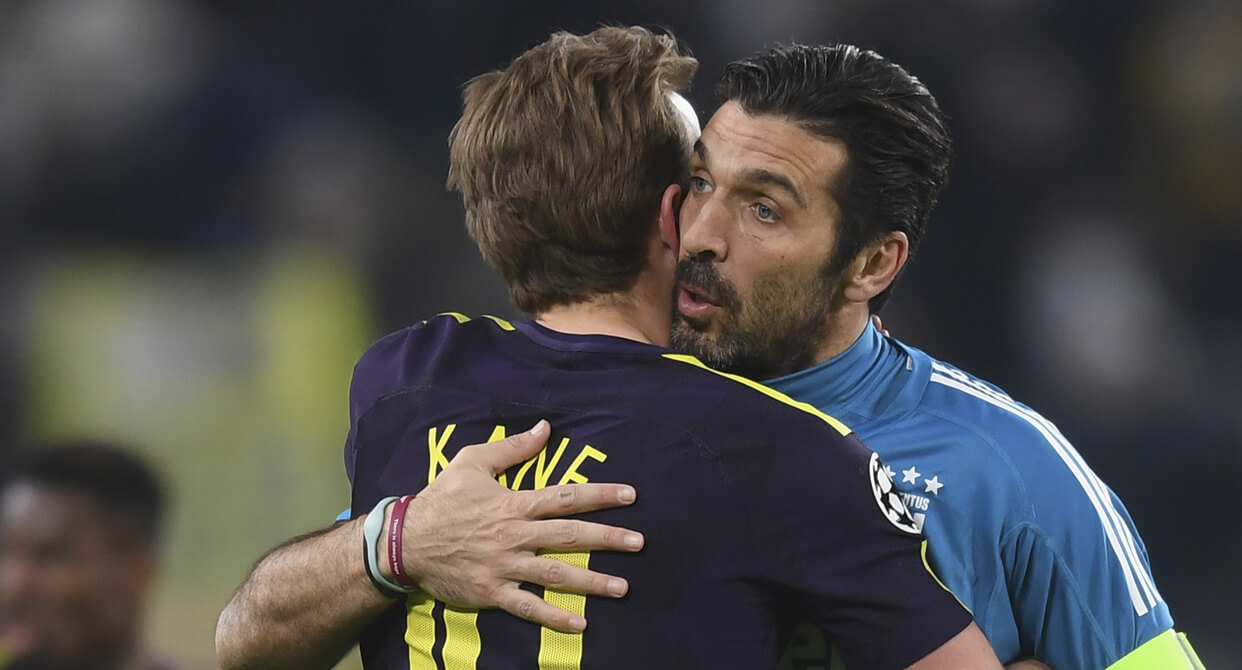 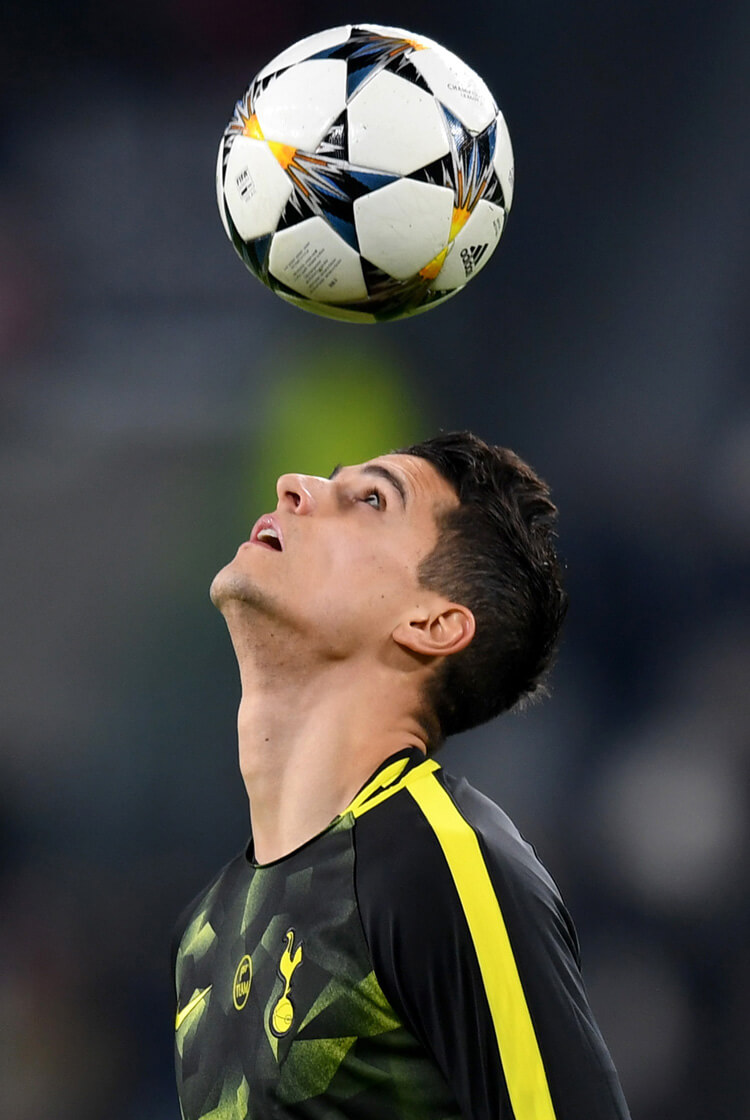 Tottenham gave more evidence of their growth as a Champions League team in a thrilling last-16, first-leg tie against Juventus in Turin. The Serie A champions led 2-0 within 10 minutes, Gonzalo Higuain sliding a superb volley past Hugo Lloris before doubling the hosts' advantage from the penalty spot. Mauricio Pochettino's men never lost their composure, however. Harry Kane pulled one back before the break, and then Christian Eriksen equalised from a free-kick midway through a second half that the visitors largely dominated. 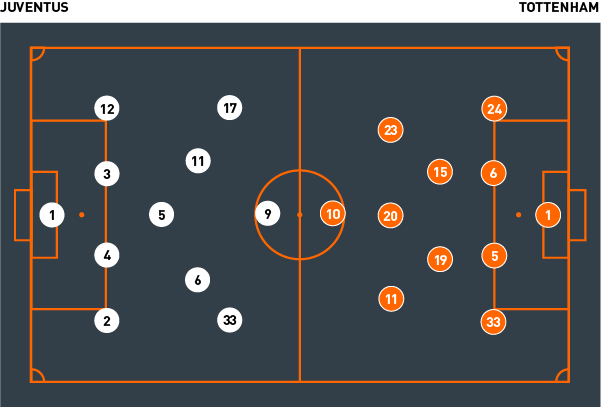 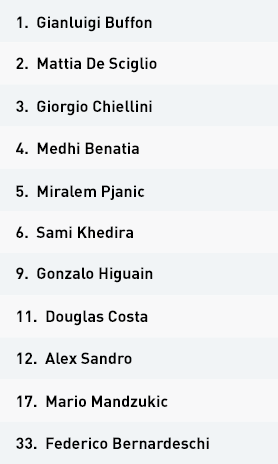 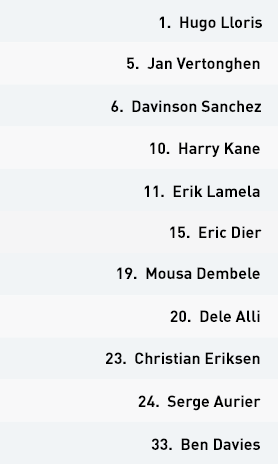 Juventus employed a 4-1-4-1 formation, with Miralem Pjanic sitting behind the midfield line of four, switching to 5-4-1 in defence. The front line of Gonzalo Higuain, supported mainly by Douglas Costa and Mario Mandzukic, channelled Tottenham through the centre to try and stifle their attacking game. The home side lost their defensive dominance after the first half-hour, however, when Spurs started to find better routes through their defence, rather than relying solely on the flanks.

The hosts kept a tight defensive line, conscious of the threat of the visitors when they got in behind. They did struggle to contain Spurs beyond the opening period, however, as Dele Alli and Harry Kane in particular were able to exploit the gaps left between the lines or in the space left between Mattia De Sciglio and Medhi Benatia.

Massimiliano Allegri’s men found it difficult to advance too far up the pitch due to an effective Tottenham high press. This forced Gianluigi Buffon and the back four to play directly into Higuain, who found it difficult to get the better of aerial battles against Jan Vertonghen and Davinson Sanchez. Juve were at their most dangerous through fast-paced attacks and counter-attacks featuring the likes of Douglas Costa, Federico Bernardeschi, substitute Rodrigo Bentancur or Mandzukic. The Turin side missed the injured Paolo Dybala, both in the penalty area and in midfield, where Sami Kherida ran out of ideas.

Juventus looked to exploit the areas left by the Spurs defence out wide, from where Douglas Costa and Bernardeschi in particular were able to play crosses into the penalty area. They also tried to use the pace of their attack to get in behind the back four as much as possible.

On the counter-attack, the home side looked for direct passes into Douglas Costa, Bernardeschi or, later in the game, Bentancur. If they started from a more defensive position, they looked for a breakaway run from Higuain.

Mauricio Pochettino’s Tottenham side started in a 4-2-3-1 formation, dropping back to 4-4-2 in the defensive phase, with Dele Alli alongside Harry Kane in the first line of defence. Out of possession they looked to press and intercept as quickly as possible in midfield, with Eric Dier and Mousa Dembele always ready to prevent Juve from playing through central areas.

In the final third, they had trouble with the space that their full-backs left on the flanks, where they were often beaten in one-on-one situations by quick players like Alex Sandro and Douglas Costa. They also encountered some problems at set-pieces; the opening goal, for example, was volleyed in by Gonzalo Higuain following a clever free-kick from Miralem Pjanic.

The visitors looked to play out from the back, through Hugo Lloris and their centre-backs, Davinson Sánchez and Jan Vertonghen. Dier and Dembele were always available, but both Alli and Christian Eriksen found themselves dropping deeper to look for possession at times. They struggled to get in behind the Juve lines centrally, with the home side packing midfield areas – but they did have more joy in wider areas, where Serge Aurier and Ben Davies exploited the space left by Erik Lamela and Eriksen drifting inside. As time went on, they were also able to take advantage of the gaps that started to appear in between the home side’s defenders; Harry Kane did just this when exploiting the gap between De Sciglio and Benatia to make it 2-1.

Spurs looked for quick and easy passes to whoever was best placed to launch their counter-attacks. Their standout move here was again the build-up to their first goal, which started with Vertonghen picking up the ball inside the centre circle.

Massimiliano Allegri’s tactics made it hard, at least initially, for Tottenham to attack. The high press from the Juventus front line forced Spurs to play direct, while the numbers they put in central areas meant the visitors had to rely on going forward in wide areas.

Juve were at their most dangerous through their fast-paced attacks and counter-attacks with the likes of Douglas Costa, Federico Bernardeschi, Mario Mandzukic and substitute Rodrigo Bentancur. They missed the injured Paolo Dybala both in the penalty area and midfield, where Sami Khedira had limited success.

Harry Kane was again excellent. Juve set up with a strong defensive unit, but the longer the game went on the more the England striker worked out how to get the better of them. Inevitably, he got the goal that brought Spurs back into the game.

Christian Eriksen also impressed. His clever movement ensured Mousa Dembele and Eric Dier always had passing options, and it was his strike from a direct free-kick – albeit one a younger Gianluigi Buffon would surely have saved – that drew Spurs level.

Tottenham were able to adapt their approach when faced with a Juve defence set up to keep things tight centrally. They stretched the game in wide areas and waited for gaps to appear in central areas – from where both of their goals eventually came.