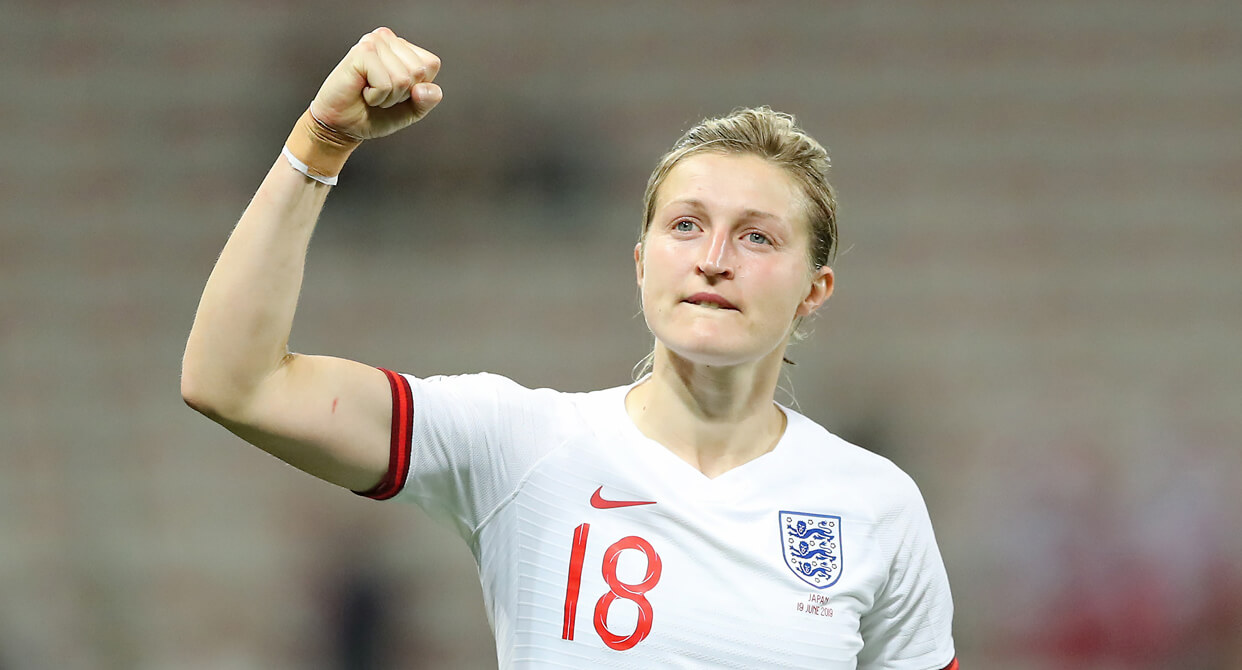 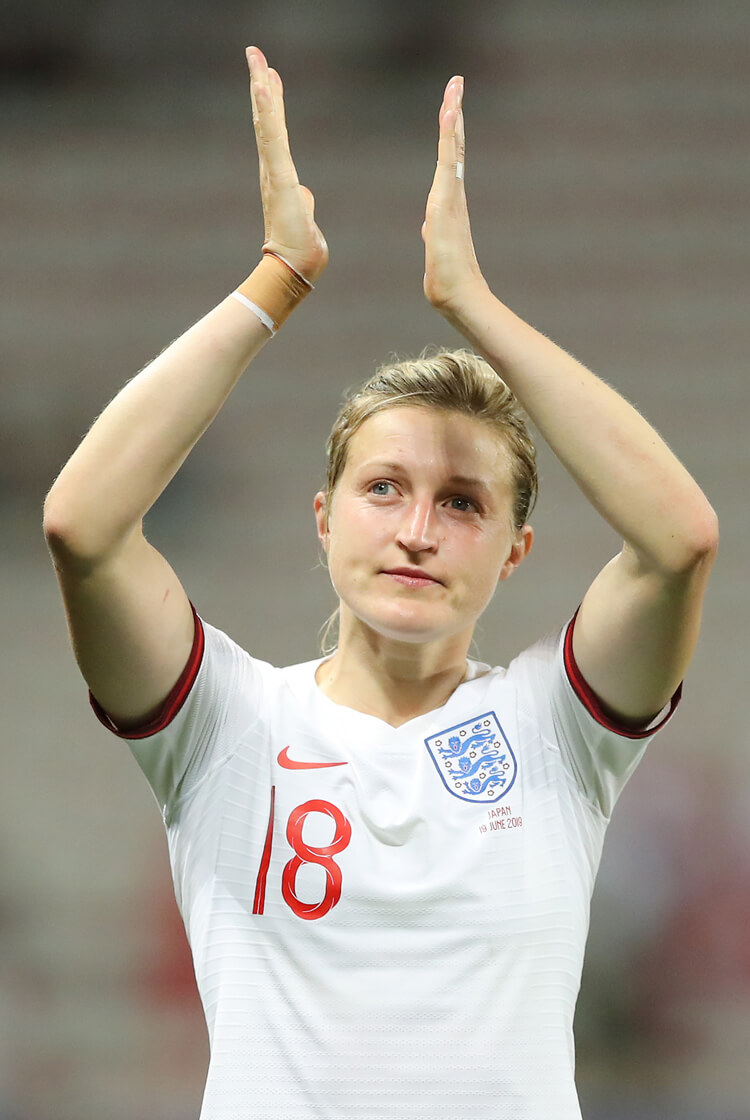 England’s third victory from three gave them first place in Group D of the 2019 Women’s World Cup, and in Japan came against the one team who could still have beaten them to that position. Head coach Phil Neville made eight changes to his starting XI from the 1-0 win over Argentina, but they took the lead when Georgia Stanway played in Ellen White to finish smartly after 14 minutes. Substitute Karen Carney was the creator for White’s second six minutes from time, with the victory securing the Lionesses a last-16 tie against Cameroon. 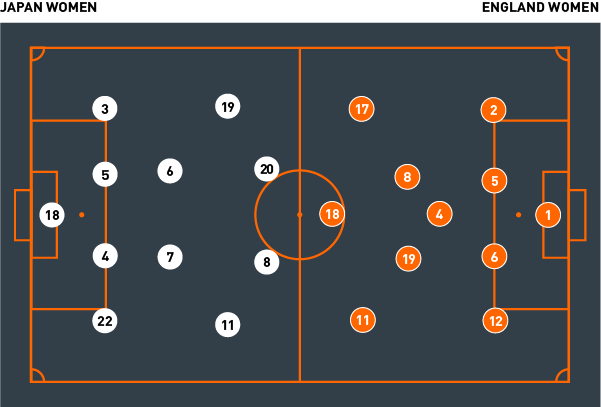 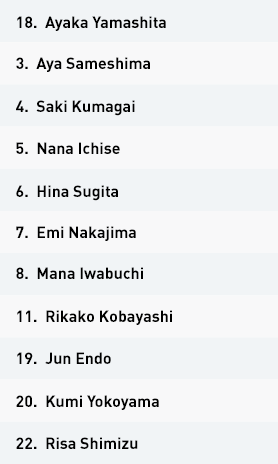 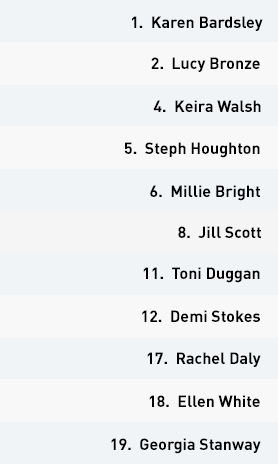 Japan are renowned for building play, controlling possession in their own half and then working through the thirds, using their technique and movement in tight areas to create passing options.

They controlled play effectively throughout the first half against England, but struggled for chances because of their inability to penetrate the Lionesses’ back four. On many occasions they played through the first and second lines of the England press, but then had neither the speed nor strength required in the final third. Their best chances came from transitions, as they pressed effectively and high into the opposition half and broke with numbers.

Japan’s starting 4-4-2 formation often became a 2-4-4 when in possession, as full-backs Risa Shimizu and Aya Sameshima pushed into midfield to join attacks. They also focused on using the space around England’s defensive midfielder Keira Walsh during build-up play – something they did effectively once they broke the first line of the block. England’s defence often covered spaces well, however, limiting the effect of the Japanese front line.

Out of possession, they dropped into a very disciplined and patient 4-4-2, using compact units and a central overload to restrict space in midfield. They switched between a high pressing line and a lower pressing line depending on the demands of the situation. From England’s goal-kicks, they were higher up the pitch, and on defensive transitions they chose the higher press. Then, if unable to pressure the player in possession, they quickly chose the deeper of the two pressing lines – only England central defenders Steph Houghton and Millie Bright were allowed time on the ball.

Japan’s discipline negated England’s threat in wide areas; they passed opponents on as those wide players drove inside and the full-backs overlapped. They also used central midfielders to cover the channels when they needed to follow full-backs who supported the wide players. England’s preference to build through Walsh was targeted by either pressing in specific areas, or through an individual – either a central midfielder or the striker on her far shoulder.

England set up in their familiar 4-3-3 shape with Keira Walsh, an unused substitute for the victory over Argentina, recalled as the single pivot in front of the central defensive pairing of Steph Houghton and Millie Bright. Georgia Stanway played alongside Jill Scott in the advanced midfield roles, while Rachel Daly and Toni Duggan supported central striker Ellen White in the front three.

Japan’s patient, defensive set-up meant that Houghton and Bright had both time and space in possession, but England largely struggled to effectively play around or through their opponents. Their finest goalscoring chances came from attacking transitions – specifically from early passes made possible by their high press.

England's build-up play involved wide attackers coming infield to options further upfield for the full-backs, but these were often restricted by the communication and discipline in the Japanese ranks. England’s central options through Walsh were also thwarted by Japan’s press and compact block, but this changed if they withdrew a full-back to tempt the opposite winger forward – which in turn created passing lanes for Walsh to exploit and find the creative players ahead of her. England also shot from distance whenever that was an option, but found Japanese goalkeeper Ayaka Yamashita equal to the tactic.

Daly had an early opportunity to score from an attacking transition when Walsh saw the early option, but it was from another Walsh pass that the Lionesses soon took the lead. Japan tried to play centrally into an overload situation in their own half, but Walsh stepped in, turned over possession and played to Stanway. The Manchester City midfielder then fed the onrunning White, whose timing split the two central defenders before she calmly finished beyond the onrushing Yamashita.

The second goal, also scored by White late in the second half, exposed space behind central defender Saki Kumagai. The Japan captain stepped up to challenge substitute Karen Carney, who in turn played White in behind for her second of the game.

England’s defensive shape was a 4-1-4-1 that occasionally became a 4-4-1-1 when defending from within the first third. They also used a high press to attempt to prevent Japan controlling possession in their own half; White was responsible for occupying Japan’s central defence and forcing play to one side wherever possible. The creative axis of Stanway and Jill Scott dealt player-for-player with the central midfield of Emi Nakajima and Hina Sugita, leaving Walsh to provide the ball-side screen of the nearest striker.