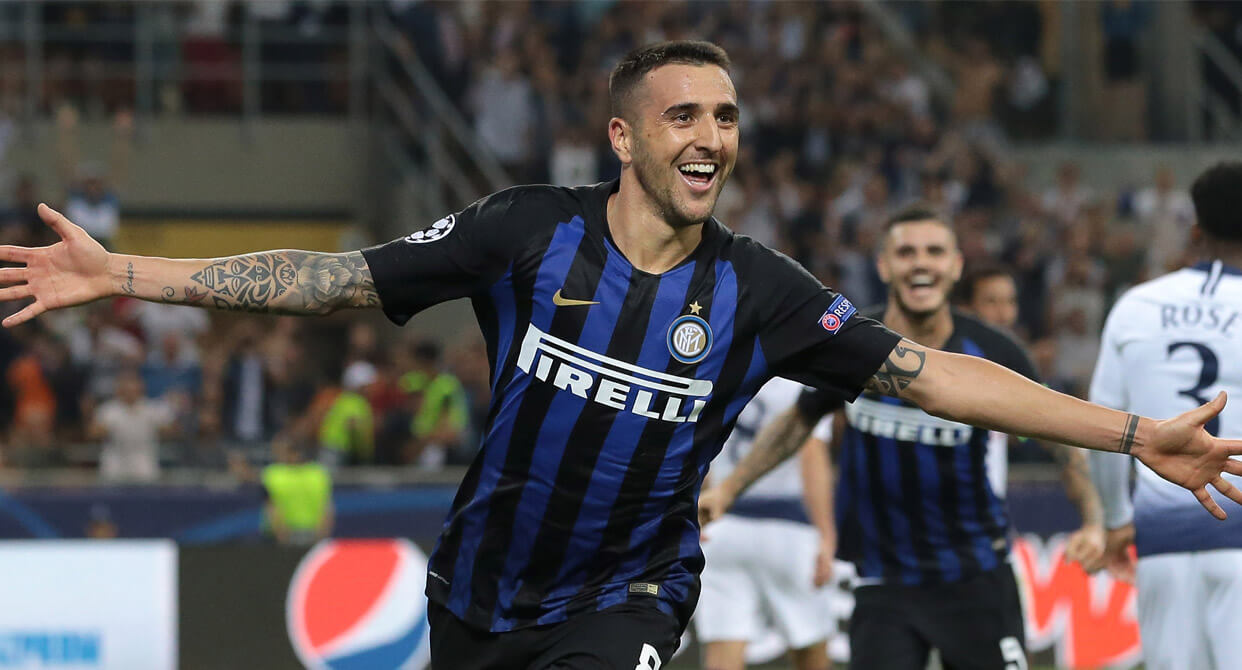 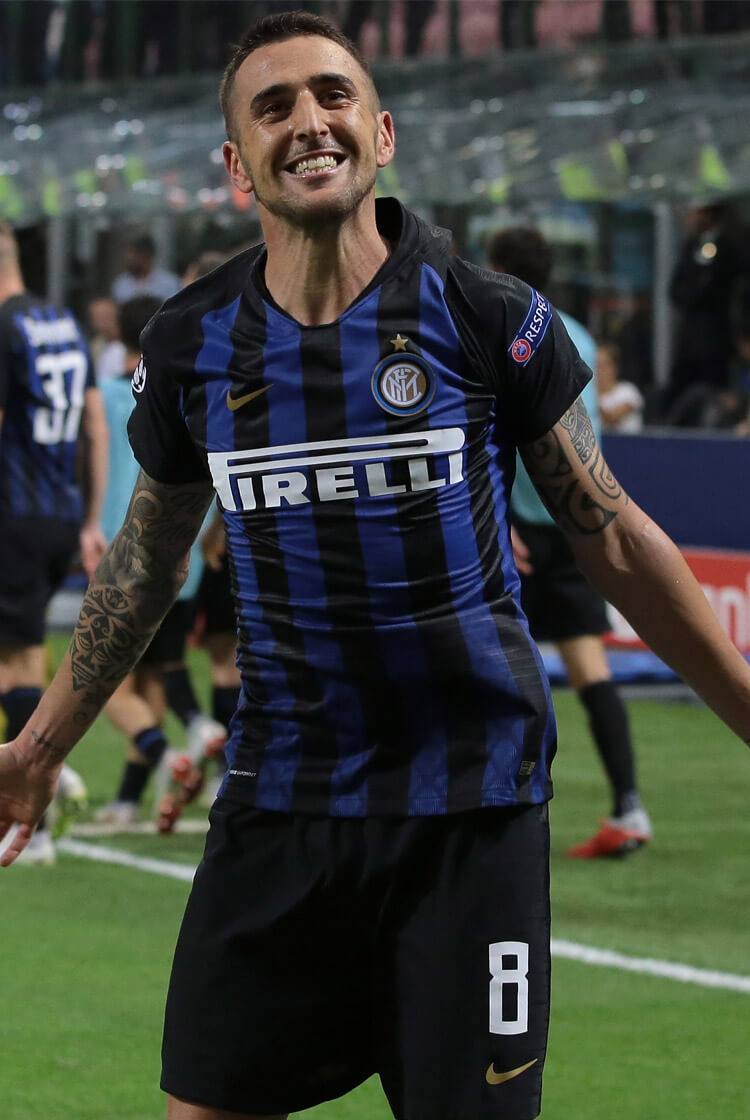 Inter Milan marked their return to the Champions League after a six-season absence by stunning Tottenham with an injury-time winner in their opening Group B meeting at the San Siro. Christian Eriksen’s deflected effort at the start of the second half looked to be the winning goal as full-time approached – but Mauro Icardi volleyed in a superb equaliser five minutes from time, and midfielder Matias Vecino headed home from a corner in the dying seconds to complete a dramatic victory. The drubbing of Manchester United at Old Trafford at the end of August hasn’t propelled Spurs on as many expected, with defeats to Watford, Liverpool and now Inter following. Manager Mauricio Pochettino now has the challenging task of regaining the side’s winning momentum. 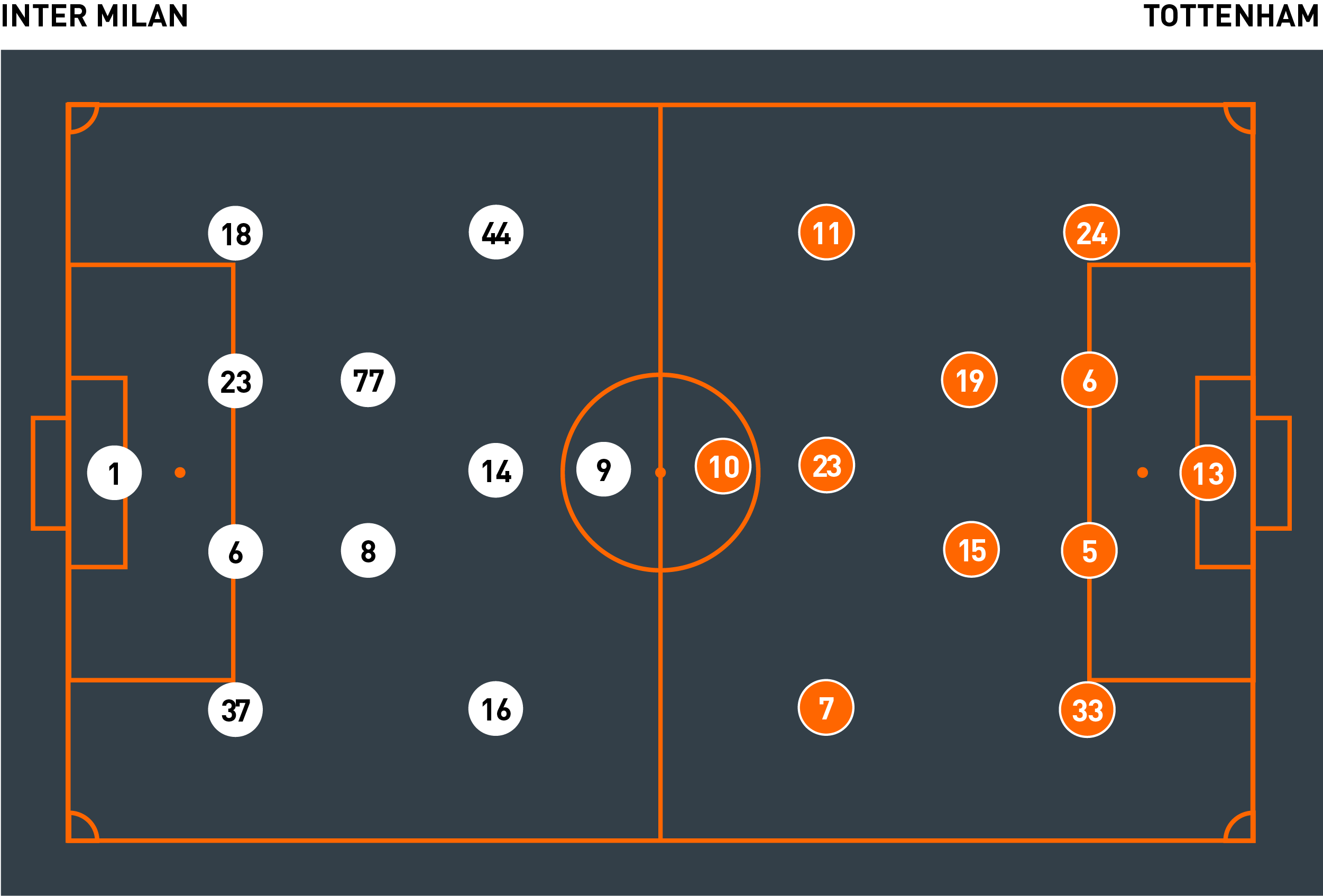 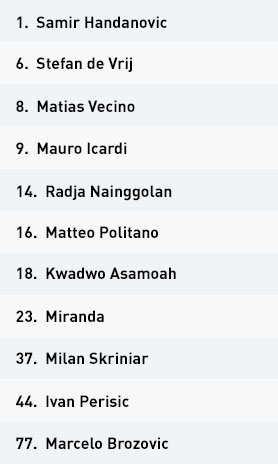 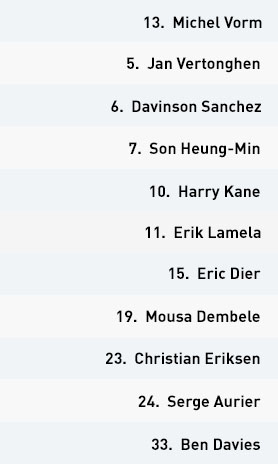 After Inter Milan’s league defeat to Parma, Luciano Spalletti made five changes to his side. Milan Skriniar moved from centre-back to right-back and Kwadwo Asamoah also came into the back line. Matias Vecino and Matteo Politano returned to the side in midfield, while Mauro Icardi returned to the starting line-up.

In the opening exchanges, the home side looked to exploit Tottenham with early through balls in behind for Ivan Perisic and Icardi to run on to from their left. With Spurs wanting to build short from the goalkeeper, Inter’s mid-block progressively moved in the hope of early regains within their opponents’ half. Their press to the visitors’ left proved effective, as Icardi quickly moved across to support Politano, while Radja Nainggolan blocked any central splitting passes from the back line. As the ball was switched back across to Tottenham’s right, however, Nainggolan would step out to support Perisic – although Icardi failed to recover back into the central lane. This then left a central space into which Christian Eriksen could drop and collect from deep.

The home back line was rarely tested early on, despite Spurs having the large proportion of possession. Both Inter full-backs remained deep within the back line, reducing their numbers going forward. They posed more of a threat once Nainggolan started to add a second forward run through the central lane when long balls from the defence, to that point poorly delivered, were sent forward.

It had initially been down to Icardi to chase down these direct passes against two central defenders, but the second run of Nainggolan started to create two-on-two opportunities that increased their success of regaining the ball deep within their opponents’ half. This approach resulted in a few attempts on goal.

However, the threat of Son Heung-min’s forward dribbling against Skriniar forced attacking midfielder Politano to drop back on the right side. This reduced Inter’s ability to press the visitors’ back line, who were able to drive into midfield and more readily find their creative attackers.

Inter’s double pivot temporarily broke its structure in an attempt to combat this. Vecino stepped higher on to Mousa Dembele, who continued to drop short to collect from the back line. For the first time in the match, central space appeared, as Politano had reduced his aggressive pressing to help cover Son and Ben Davies. This only added to their problems, though, creating more central space and increasing Tottenham’s access into Harry Kane and Eriksen. Perisic moved across to help cover the gaps, but that left Serge Aurier free to add an overlapping threat from right-back.

Spurs continued to progress the ball through the central channel in the second half, with Dembele’s blindside runs behind Nainggolan creating the ideal passing lane for the back line. Kane’s dropping away from the central defence also provided Dembele with another passing option, presenting healthy numbers behind a reassembled double pivot. Inter consequently struggled to contain early attacks in the second half, having been pinned back into a 4-4-2 defensive mid-block.

With Tottenham increasing the pressure after Eriksen’s deflected half-volley had given them the lead in the 53rd minute, Spalletti introduced Antonio Candreva and Keita Balde from the bench. They now became more direct and threatening during moments of attacking transitions, with fresh legs against the Tottenham full-backs creating promising opportunities to counter-attack in wide areas. Icardi and Nainggolan increasingly looked for cutback crosses, pulling away from the central defenders.

Asamoah progressively moved higher, too, as Inter began to enjoy more of the ball in the final quarter. With the left-back now providing attacking width, either Balde or Candreva in front of him could move inside to support Nainggolan and Icardi, putting extra pressure on the central defence. Asamoah moved higher once more in the final five minutes, delivering a deep cross for Icardi to volley home brilliantly.

Inter had seized control of the contest by making full use of their full-backs in the wide areas. Tottenham looked to have survived after a goalmouth scramble in the closing stages, but the following corner yielded the winning goal for Inter. Vecino rose highest to complete the comeback and seal the three points.

Head coach Mauricio Pochettino also made five changes for his team’s opening Champions League match of the season. Kieran Trippier, Toby Alderweireld and Danny Rose were left out from the team that had started in the poor defeat to Liverpool, with Serge Aurier, Davinson Sanchez and Ben Davies brought in. Two changes in midfield saw Harry Winks and Lucas Moura drop to the bench, with Erik Lamela and Son Heung-min coming in to support Harry Kane.

Tottenham immediately looked to dominate possession, as their patient short build-up from goalkeeper Michel Vorm lured in the Inter attackers. The double pivot of Eric Dier and Mousa Dembele filled in the spaces between their central defenders and full-backs, although Jan Vertonghen’s delayed touches in possession often made it easy for the forwards to block Spurs into their left corner. Despite their numerical advantage, with Dier supporting Davies in this area, they were unconvincing in playing out.

The right side brought a smoother and more successful build. Dembele’s ability to receive and turn under pressure ensured they maintained control of the ball, even when faced with a more intense press. They could then switch the ball left, where Son kept his position out wide. This pattern of play proved most effective in building and moving through the thirds, particularly as Radja Nainggolan was lured into a high press and Mauro Icardi failed to cover the central lane. This allowed Eriksen to drop short and collect when the back line needed assistance.

Despite dominating possession, Spurs struggled to consistently penetrate into the final third. Inter were clever in conceding tactical fouls when it appeared Tottenham had found a breakthrough, and the resulting free-kicks were comfortably dealt with by an aerially dominant home defence. Tottenham looked most efficient in attack when both wide midfielders, Son and Lamela, chose to dribble and run at their men. Son in particular had the skill and speed to beat out-of-position centre-back Milan Skriniar at right-back.

As the visitors began to penetrate at an alarming rate on their left side, Inter became more defensive, with right midfielder Matteo Politano dropping back to create a two-against-one on Son. In doing this, however, the hosts reduced their ability to press Tottenham’s back line, allowing centre-backs Sanchez and Vertonghen to step into midfield with the ball. This in turn created more central space for Eriksen to receive between or behind the double pivot.

Son’s variety of dribbling – the South Korea international started to venture inside with the ball as well as driving along the touchline – added to Tottenham’s final-third penetrations. With Dembele luring Vecino out from Inter’s double pivot as they built short from the back line, Son was now afforded central spaces to attack. Eriksen tried to occupy Marcelo Brozovic, who was caught between squeezing the central space in Vecino’s absence and leaving the Dane free. Eriksen, Lamela and Aurier linked well with Kane on the right, forcing goalkeeper Samir Handanovic into a good number of saves.

Tottenham’s exploitation of the central lane continued, as Dembele’s movement away from Nainggolan gave the back line a consistent central passing option into midfield. Dembele’s ability to drive forward, combined with Kane’s dropping short to add numbers around their opponents’ double pivot, allowed Spurs to consistently work the ball into the attacking half. They eventually took the lead through a deflected drive from Eriksen, with Dembele connecting the defence into attack and Son cutting in from the left to combine with the goalscorer.

Substitutions from Inter in the wide positions increased the pressure on the defence, resulting in a more reserved Tottenham in the last 20 minutes. The hosts had more numbers to attack their long balls forward, as Kwadwo Asamoah had moved higher from left-back, which pushed Keita Balde ahead to join Mauro Icardi. Approaching full-time, the latter sent a powerful first-time volley past Vorm before Vecino headed home a last-minute winner from a corner. There was little time for Tottenham to stage a comeback of their own, as they fell to a third consecutive defeat in all competitions.