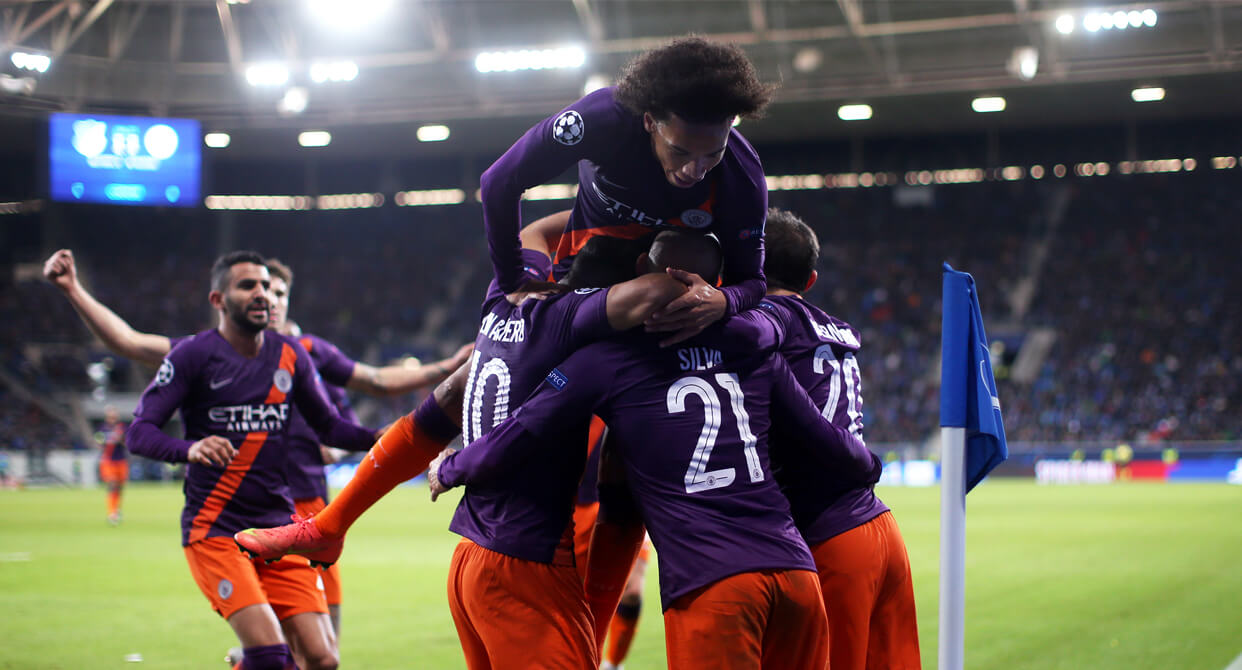 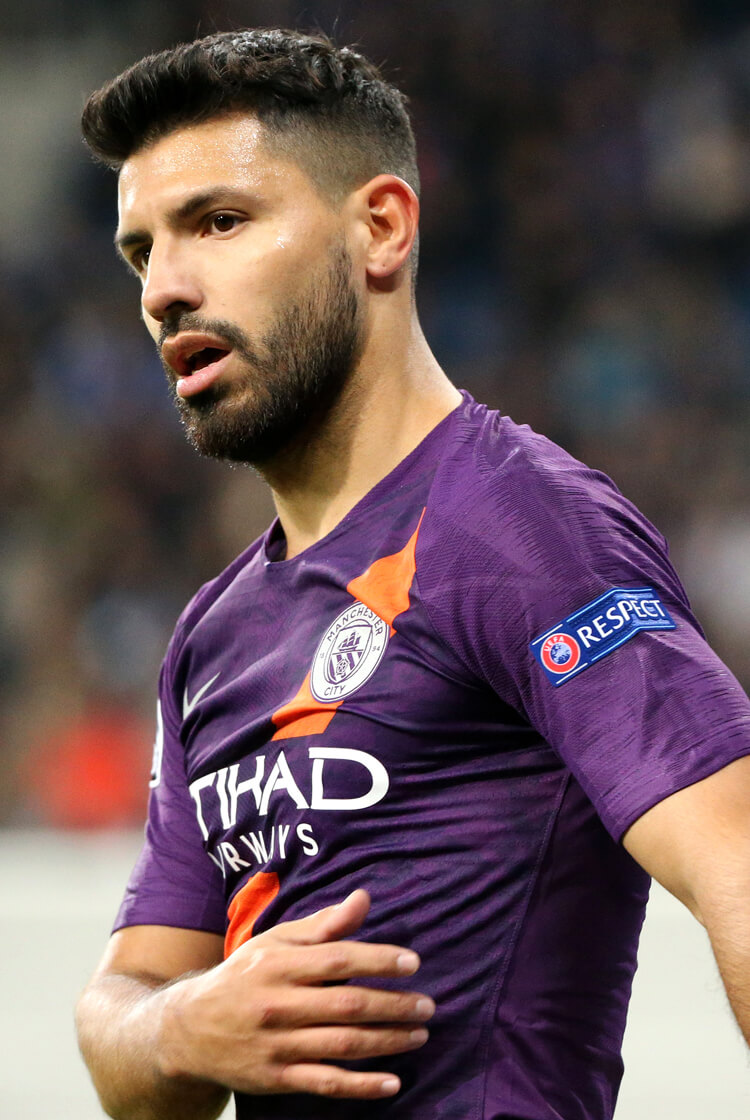 David Silva’s 87th-minute strike against Hoffenheim got Manchester City up and running in this season’s Champions League. It seemed that City would be taking home only a point before the Spaniard capitalised on an error by defender Stefan Posch to burst into the box and stab the ball past goalkeeper Oliver Baumann, sealing three much-needed points after defeat to Lyon in their opening game of Group F. Pep Guardiola’s players had got off to the worst possible start when Ishak Belfodil opened the scoring for the hosts with only 43 seconds on the clock, but Sergio Aguero met the cutback of Leroy Sane to equalise six minutes later. Opportunities were few and far between from then on, and Guardiola, despite the win, might be concerned by another scrappy performance in Europe from his side. 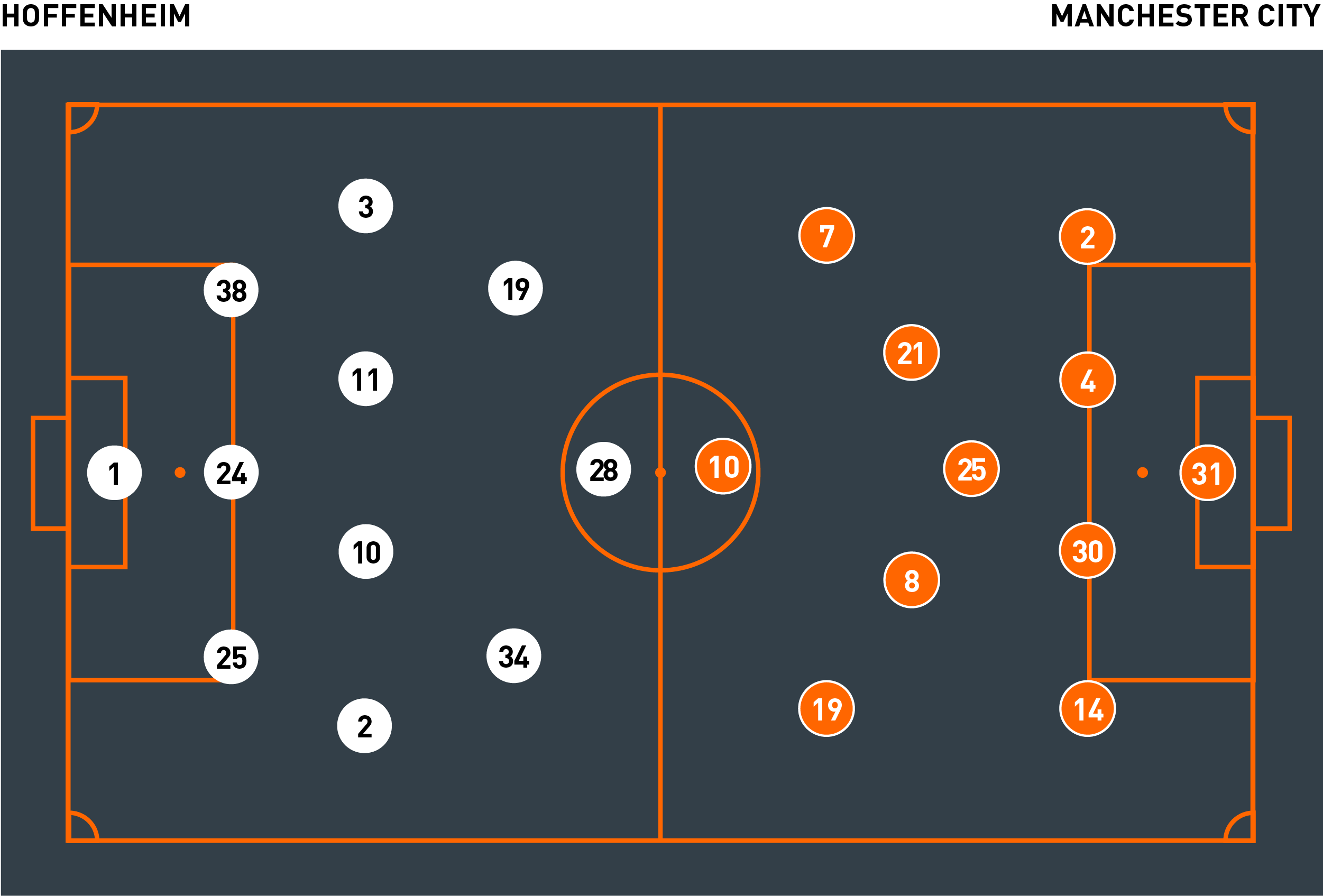 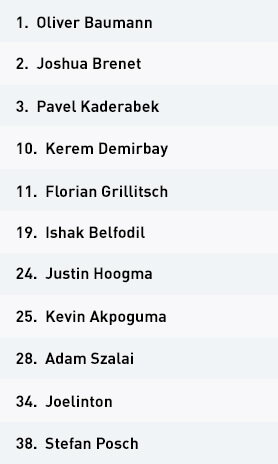 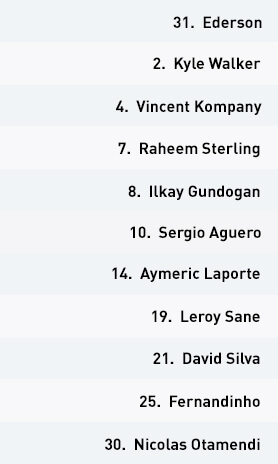 Hoffenheim used a 3-4-3 shape in possession, with Justin Hoogma dropping in from his holding midfield position to form a back three with the two centre-backs Kevin Akpoguma and Stefan Posch. Joshua Brenet and Pavel Kaderabek could then push forward from their full-back positions to form a midfield four with Kerem Demirbay and Florian Grillitsch. The front three consisted of Joelinton, Adam Szalai (later Andrej Kramaric) and Ishak Belfodil.

The hosts’ idea in possession was to try to encourage the Manchester City players to form a compact shape in the central areas and open up the wings, creating a free pass to wing-backs Brenet and Kaderabek. To assist with this, the front three would often play inside their opponents’ back four to bring them closer together and, in midfield, the pressing of City’s three attackers helped to create an overload in their favour. With Leroy Sane and Raheem Sterling joining Sergio Aguero in pressing their three centre-backs, only Fernandinho, David Silva and Ilkay Gundogan would remain to cover Hoffenheim’s four midfield players – this, at times, only helped with the home side’s desire to force space out wide.

Hoffenheim would look to play passes inside, inviting City to further close up – this meant that the next pass could be played outside before the ball was then delivered into the box. If the visitors didn’t allow this, they would try to play through the middle – as seen in their goal in the opening minute. Their other strategy was to hit City with fast counter-attacks in transition. They tried to be direct with these, keeping the ball moving forward, but they struggled to evade the counter-press of Pep Guardiola’s players.

They used a 4-3-3 mid-block out of possession, and transitioning from their attacking structure into their defensive structure was fairly straightforward; the wing-backs simply had to tuck in next to their two traditional centre-backs, while Hoogma would return to his central midfield position. Only when City had reached the halfway line would they engage with their opponents, unless a counter-press was possible. Even as City reached the Hoffenheim half, the press would be limited, geared more towards preventing the visitors from playing forward than regaining possession. The idea was to show City towards the touchline before trapping them with an aggressive press.

The distance between the full-backs and their nearest centre-backs in the out-of-possession structure was interesting; it was larger than would normally be the case, presumably to allow for immediate pressure to be put on Sane and Sterling, should they receive the ball. As a result, though, they were left vulnerable to passes in between the full-back and centre-back. These passes pose more of a threat than those played outside the full-back, as the full-back can be taken out of the game – this was evident in David Silva’s pass to Sane in the build-up to City’s equaliser.

Manchester City set up in a 4-3-3 structure in possession, with Fernandinho, David Silva and Ilkay Gundogan as the midfield three. Leroy Sane, Raheem Sterling and Sergio Aguero led the line.

The visitors saw plenty of the ball and had to display patience in breaking Hoffenheim down. Due to their opponents’ central compactness, they found success in creating opportunities through the half-spaces and wide areas, where their positional organisation was excellent. They would look to have five lines of attack to try and penetrate: Sane on the left wing, Sterling on the right wing, Gundogan and David Silva through the half-space, and Aguero through the middle. David Silva and Gundogan could regularly be found trying to make penetrative runs through the half-space and beyond the back line, while Aguero could be seen dropping off the top line to entice defenders to follow, creating more space behind for penetrative runs from his teammates. To maintain their width up until the final third, Sane and Sterling would look to make late inside runs to get in behind the defence – this could be seen from Sane in the build-up to their first goal.

While these attackers were occupying these positions, Fernandinho would often be the player supporting in a deeper position, remaining on the same side as the ball. There were several examples of full-backs Aymeric Laporte and Kyle Walker providing support, too – the full-backs did not get forward as much as usual, largely due to the potential threat of the hosts’ counter-attacks. When John Stones was introduced for Nicolas Otamendi in the second half, he operated in front of Vincent Kompany rather than alongside him, essentially creating an extra man in midfield.

Out of possession, they performed with tactical flexibility, operating in a few different structures depending on the situation. When pressing goal-kicks, Fernandinho would often drop in between Kompany and Otamendi – this would allow Laporte or Walker (depending on which side the ball was on) to push further up the pitch to press Hoffenheim’s wing-backs. Sane and Sterling could then assist Aguero in pressing the three centre-backs.

They would take on a 4-1-4-1 structure further up the pitch, where Fernandinho would play between the lines and Aguero would lead the line by himself. David Silva would occasionally join Aguero, with Fernandinho pushing into central midfield to press in a 4-4-2 system. Key to their out-of-possession work, though, was the counter-press. This was set up through their positioning in possession, whereby support around the ball on all sides was available – so when possession was lost, they could press immediately. This also ensured they had balance in deeper areas, in case the counter-press was evaded.