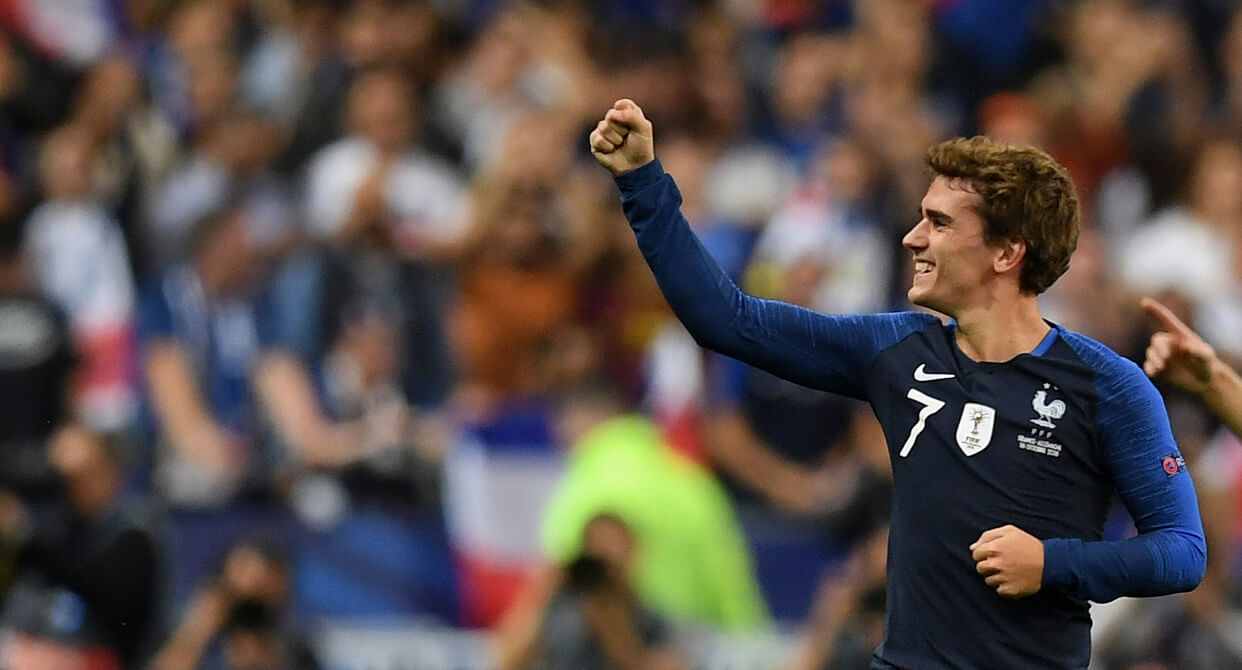 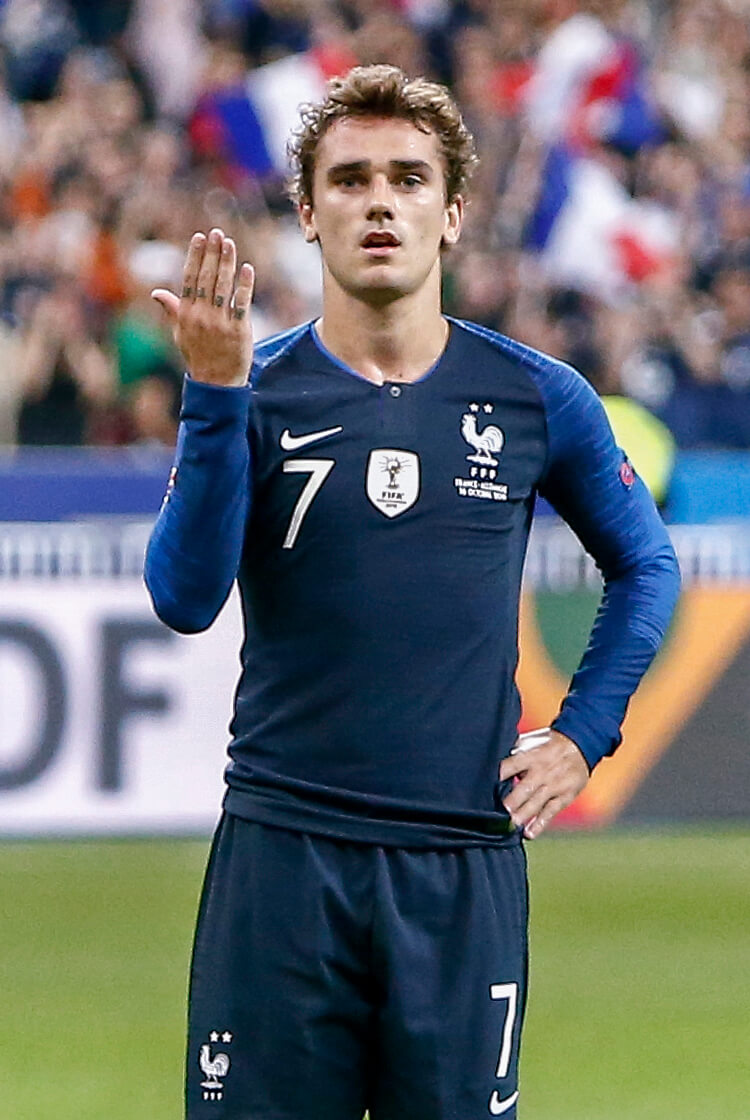 France came from behind to secure victory over Germany in this UEFA Nations League tie, with Atletico Madrid forward Antoine Griezmann striking twice. Real Madrid midfielder Toni Kroos opened the scoring from the penalty spot early in the first half, following a handball by Presnel Kimpembe from Leroy Sane’s cutback, but they failed to extend their lead and Griezmann drew his side level shortly after the hour with the most sublime of looping headers from a driven Lucas Hernandez cross. Ten minutes from time, Mats Hummels was adjudged to have brought Blaise Matuidi down in the Germany area, and Griezmann stepped up to calmly slot the winner past Manuel Neuer. The visitors have now lost a record six games in 2018, with pressure understandably mounting on manager Joachim Low. 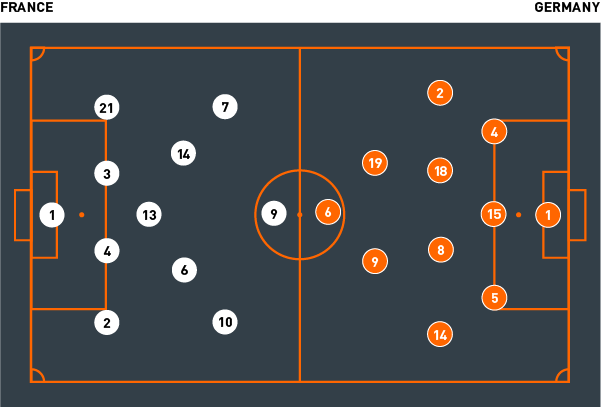 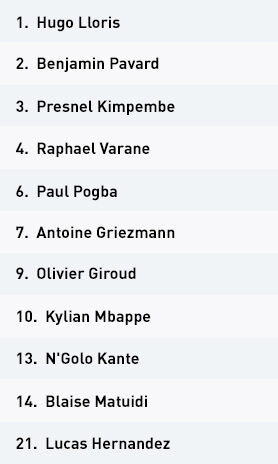 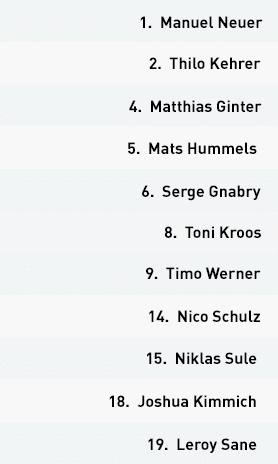 France set up in a 4-3-3 in possession, with Paul Pogba, N’Golo Kante and Blaise Matuidi in midfield behind Antoine Griezmann, Kylian Mbappe and Olivier Giroud in attack.

The hosts struggled to maintain many phases of good possession during the initial stages of the game and looked to play early to Giroud in transition, who had support nearby for any potential knock-down or flick-on. As the game progressed, they were afforded more possession and performed with patience in regularly moving the ball from one side of the pitch to the other. They preferred to do so with four to five short passes rather than one or two longer passes; the shorter passes were designed to entice Germany players towards the ball and open up spaces behind for penetration. Eventually, this approach would lead to the creation of a free man out wide – typically full-backs Benjamin Pavard or Lucas Hernandez, as seen for the equalising goal.

During the build-up phases, Griezmann would often drop towards the ball in order to create an extra man in midfield, leaving Giroud and Mbappe higher. This provided both the direct option and the threat of running in behind. With two forwards rather than three, Matuidi had an important role that was dependent on the positioning of the wide forwards and left-back Hernandez. If Hernandez and the forward remained deep, Matuidi would make a run in behind the defence to offer another threat; if Hernandez wished to push up and Griezmann was already high, the midfielder would take on a deeper position to provide security. The former part of this role was evident in the build-up to the winning penalty.

As the centre-backs were rarely pressed, they had to look for passes through Germany. The midfielders tended to perform straight movements towards the ball in the hope of bringing an opponent with them before opening up a diagonal penetrative option to the next line. If the dropping player was not followed by an opponent, he could receive and turn.

Didier Deschamps’ team switched between a couple of different shapes out of possession, depending on the circumstances. They would operate in a 4-4-2 for the most part, with Giroud and usually Mbappe, but sometimes Griezmann, forming the top line. Depending on which forward dropped in to the midfield line, the remaining three midfielders would then shift left or right.

The real battle out of possession was in trying to control the wide areas, where Germany tended to favour their build-up. The relationship between wide forward (wide midfielder out of possession) and full-back was crucial in trying to nullify the threat of the visitors’ wing-back and wide attacker pairing. The communication and concentration between these two individuals (usually Hernandez with Matuidi or Griezmann, and Pavard with Mbappe) had to be consistent due to the rotation and interchanges of the Germany players.

Rather than staying with their men and tracking them into spaces, the France players would hold their position and pass the individuals on to each other, ensuring that they did not leave themselves open for penetration in behind the back line. When the Germany full-backs played particularly high, the wide midfielder on that side would drop in to a full-back position, forming a back five, as their opponents’ attacking three would have moved in centrally. With the wide midfielder dropping back, the player acting as the second striker at that time would drop in alongside Pogba and Kante to form a midfield four; this worked to maintain central compactness and ensure they wouldn’t suffer an overload.

Germany set up in a 3-4-3 in possession, with wing-backs Thilo Kehrer and Nico Schulz joining Toni Kroos and Joshua Kimmich across the midfield. Leroy Sane, Timo Werner and Serge Gnabry comprised the attack.

Joachim Low’s team operated in a direct and vertical fashion, looking to play and run forward as quickly as possible. This strategy usually manifested itself in transition, and they created several first-half chances in this way. But for a lack of quality in the final third, they might have gone in with a more comfortable lead at half-time.

When quick, vertical options were not available, they would look to build in the wide areas. Wing-backs Schulz and Kehrer were hugely important in this, as were their respective relationships with whichever of the three forwards happened to have taken up an outside position at that time. The fluidity of the front three was evident throughout the game.

They tried to exploit the space in behind the full-backs before delivering early, low crosses into the box for runners – and they built to this in a variety of ways. One method was in overloading one side of the field before switching to the other, although this was dealt with reasonably well by their opponents. Another approach was in playing with the wing-backs on the highest line and positioned as the widest players. In this situation, a pass out to their feet would be the trigger for the ball-side forward to make a run in between the centre-back and full-back to receive the next pass and cross.


Against organised opposition, though, these strategies could be difficult to execute. They tried to entice the wide players (usually Antoine Griezmann) towards the central defender looking to bring the ball out – this would then free up either the wing-back or the forward, who could operate in a two-on-one situation against the France full-back if the hosts’ midfielders failed to cover in time.

Out of possession, the visitors were fairly compact and switched between a 5-2-3 or a 5-4-1 system. The 5-2-3 was designed to deal with France’s advancing full-backs while still maintaining central compactness to make it more difficult for their opponents to play to their front three. Wing-backs Schulz and Kehrer would drop back in to form the line of five but tended to track the full-backs if they dropped deeper, too.

The positioning of Kroos and Kimmich would depend on the out-of-possession strategy being deployed at that moment. If the press was higher up the pitch, they would take up positions close to the front three in order to back them up and make passes into midfield difficult – thus encouraging long balls that could be dealt with by the defence. If they operated in a mid-block, they would position themselves closer to the defensive line in order to provide more protection.