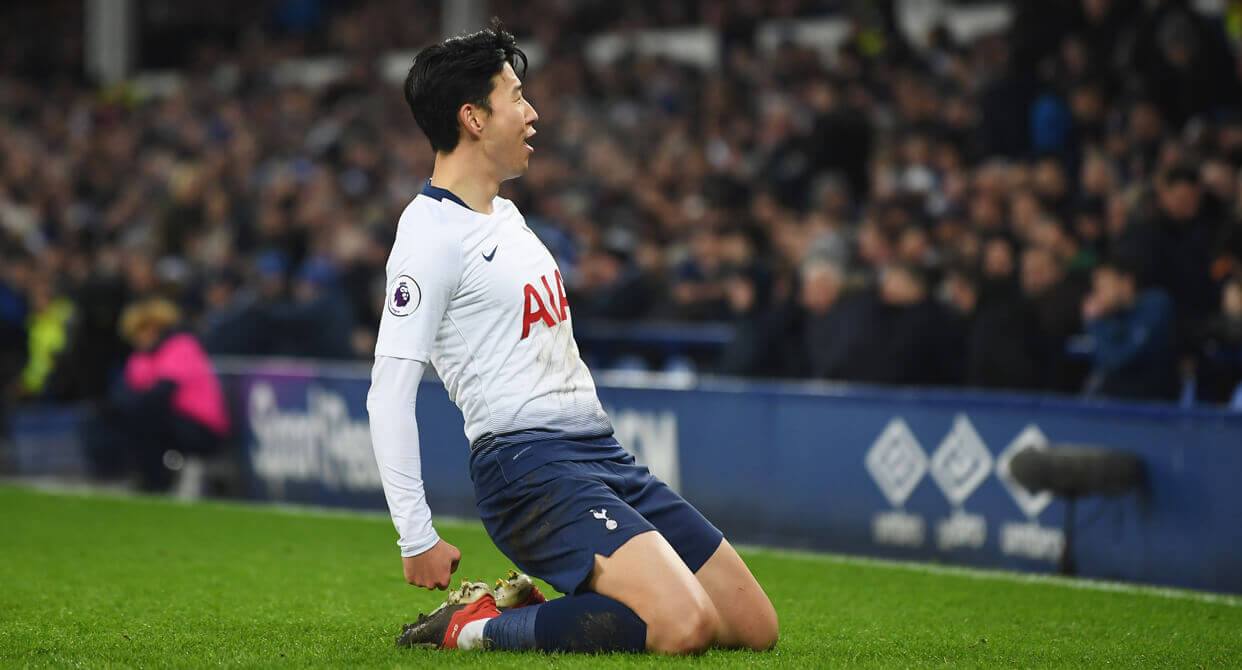 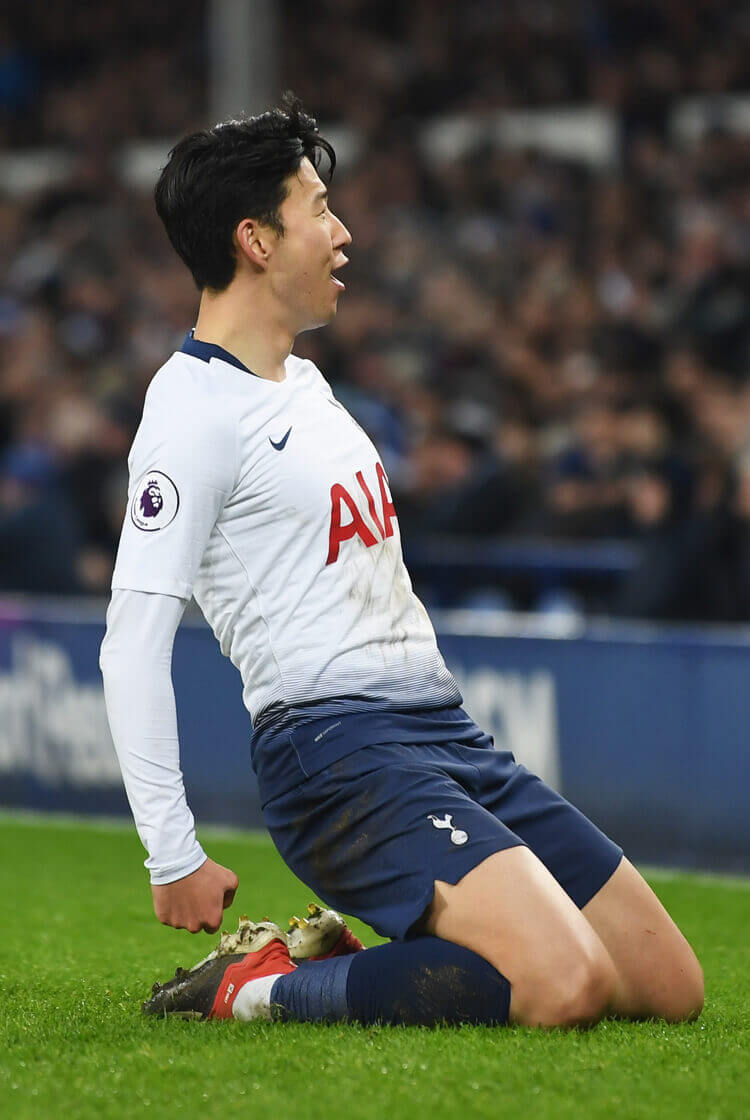 On the day he celebrated his 26th wedding anniversary, Mauricio Pochettino received a present from his own players in the form of a blistering display that tore Everton apart in their own stadium. Marco Silva’s men actually took the lead against the run of play shortly after the 20-minute mark, when an emotional Theo Walcott scored his sixth career goal against Tottenham. It took only six minutes for Spurs to equalise, when Son Heung-min struck a superb shot in from a tight angle after a terrible mix-up between Jordan Pickford and Kurt Zouma – and from that point the visitors ran riot. Dele Alli, Harry Kane (twice) and Christian Eriksen all got on the scoresheet, with the irresistible Son adding a second of his own as Tottenham racked up six goals in a Premier League game for the first time since back-to-back away games at Leicester and Hull in the 2016/17 season. Gylfi Sigurdsson’s second-half strike changed little for an Everton team that head into Christmas in the bottom half of the table. 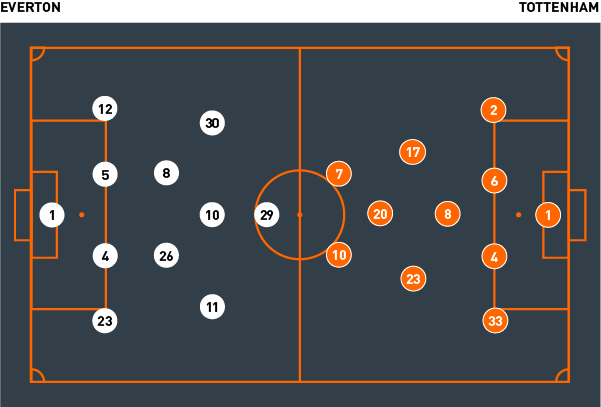 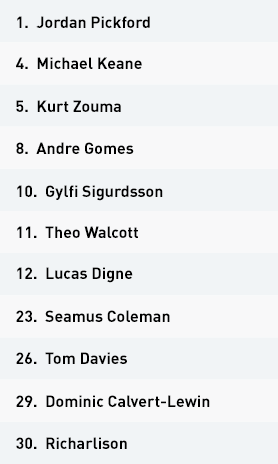 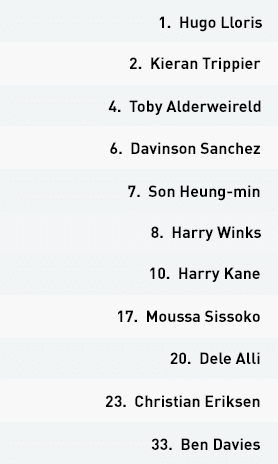 Marco Silva set his Everton team up in a 4-2-3-1 structure, with Tom Davies and Andre Gomes as the double pivot in midfield. Prioritising build-up in the wide areas and using crosses from their full-backs meant the hosts could push Theo Walcott or Richarlison into the penalty area as an extra central attacker to support Dominic Calvert-Lewin and Gylfi Sigurdsson. Both runners had early chances, and it was from a low Calvert-Lewin cross that Walcott shot Everton into an earlyish, albeit short-lived, lead. The pair again combined to have the ball in the Tottenham net moments later, but Calvert-Lewin’s header was disallowed for a push on Davinson Sanchez.

The hosts struggled when building with shorter passes in the central lane, against Tottenham’s heavy central presence. They thus reverted to focusing on the wider areas, with Seamus Coleman making good forward progress from right-back. This worked particularly well with Richarlison – a stronger aerial presence than might be expected – making late runs in from the opposite flank.

As Tottenham started to dominate, Everton’s possession naturally suffered. Direct switches of play – avoiding the central lane completely – helped them play around or over Spurs’ aggressively pressing front line, but in the final third they lacked the quality to hold the ball up or create subtle combinations in tight areas.

The injury to Andre Gomes midway through the second half, shortly after Sigurdsson had given Everton some semblance of hope at 4-2 down, reduced the effectiveness of the hosts’ possession, especially as they tried to build with direct switches of play. Without Gomes to orchestrate proceedings within the central lane – and often deliver the final switch itself – Everton lost their regular route to the flanks. They were unable to consistently play through or around the visitors’ mid-block, with neither their passing nor movement having any real impact.

Out of possession, Everton converted into a flat 4-4-2 structure, with Sigurdsson usually the one to move higher and support Calvert-Lewin. Walcott and Richarlison dropped back into a flat midfield four, but both stayed too deep without the ball – with their two quickest players so far back, the hosts’ counter-attacks lacked any significant cutting edge.

Their mid-block moved deeper and deeper throughout the first half, but it looked relatively comfortable until Jordan Pickford collided with Kurt Zouma and Son Heung-min drew the visitors level. From here, Everton’s back line lost its organisation against a fluid and rotating Tottenham attack that repeatedly found gaps in between and behind the lines. Two more goals before the break – both from rebounds – represented brutal punishment for a shellshocked defence.

Christian Eriksen’s superb low strike beat Pickford from distance shortly after the restart. With the Dane now supporting more ahead of the ball from deep, and substitute Erik Lamela’s dribbling in central areas yet another threat, Everton’s central midfield became simply overwhelmed. Further goals from both Harry Kane and Son Heung-min condemned the Toffees to a thrashing, with Silva now having coached three different teams to six-goal home defeats.

Mauricio Pochettino set Tottenham up in a fluid 4-4-2 diamond structure, with full-backs Ben Davies and Kieran Trippier providing the width outside a consistently rotating midfield. Harry Winks acted as a dropping pivot between the two centre-backs, while Christian Eriksen and Moussa Sissoko also dropped deeper towards the ball – both to fill spaces in the inside channels and offer passing options around Everton’s two pressing strikers.

Dele Alli and Son Heung-min supported Harry Kane further forward, with Alli generally moving towards the ball and Son running in behind. In the opening exchanges, Davies moved much higher on the Spurs left than Trippier on the right, where both Kane and Son were making runs in behind. Kane had a number of chances to open the scoring before Son eventually replied to Theo Walcott’s opener with a superb finish from a tight angle.

As the first half progressed, Kane was a more prominent figure from the left, with Son as the more central attacking figure. Alli also drifted to the inside left channel as Spurs created a tight attacking triangle. Quick passing combinations between the trio gave Everton’s central defence consistent problems between the lines, with Moussa Sissoko and Trippier also now afforded more space to provide support and crosses from the right.

Having gone into the break 3-1 up, Tottenham’s dominance with the ball continued into the second half, with Erik Lamela introduced for the injured Alli. But it was Eriksen, now stepping ahead of the ball for the first time, who extended the lead with an arrowing effort that flew past a struggling Jordan Pickford. The timing of the Dane’s forward movements was exemplary, with Lamela’s not quite as well-timed or effective as Alli’s had been in the first half.

However, the Argentinian’s ability to dribble in tight areas did draw Everton’s central defenders out of shape more often, creating additional space for Kane and Son to run in behind under much less pressure. Son’s second, and Tottenham’s fifth, was a fine example of Lamela driving forward through central midfield; even when Everton’s back line backed off to track the runs of Kane and Son, Lamela released the ball at the perfect moment for Son to finish. Kane’s second of the night – completing his fourth consecutive brace against Everton – finished off a wonderfully patient Tottenham move.

Despite dominating possession, Spurs did find themselves under occasional pressure, particularly in the early stages of the game. With Kane, Son and Alli protecting central areas from within their first line of pressure, Everton had space to play around Tottenham’s midfield. Eriksen, Winks and Sissoko were unable to cover the entire width of midfield, leaving spaces into which Everton could push their full-backs. It was from a wide cross that Tottenham fell behind, and from which they could even have gone 2-0 down soon after – this was the only frailty in their otherwise compact 4-3-3 defensive structure.

Tottenham’s back line was particularly impressive during moments of defensive transition, however, as Toby Alderweireld and Davinson Sanchez blocked any decent access into Dominic Calvert-Lewin. Everton naturally tried to base their counter-attacks off their lone forward, buying time for runners from deep. However, the power of Spurs’ centre-backs ensured the ball rarely stuck – and in the second half the visitors gradually pushed their defensive line higher and higher until they permanently set up around the halfway line. This gave Everton much less space to build – with the exception of Sigurdsson’s consolation, the hosts created little in a second half Tottenham dominated on their way to a victory that saw them draw to within two points of Manchester City in second.