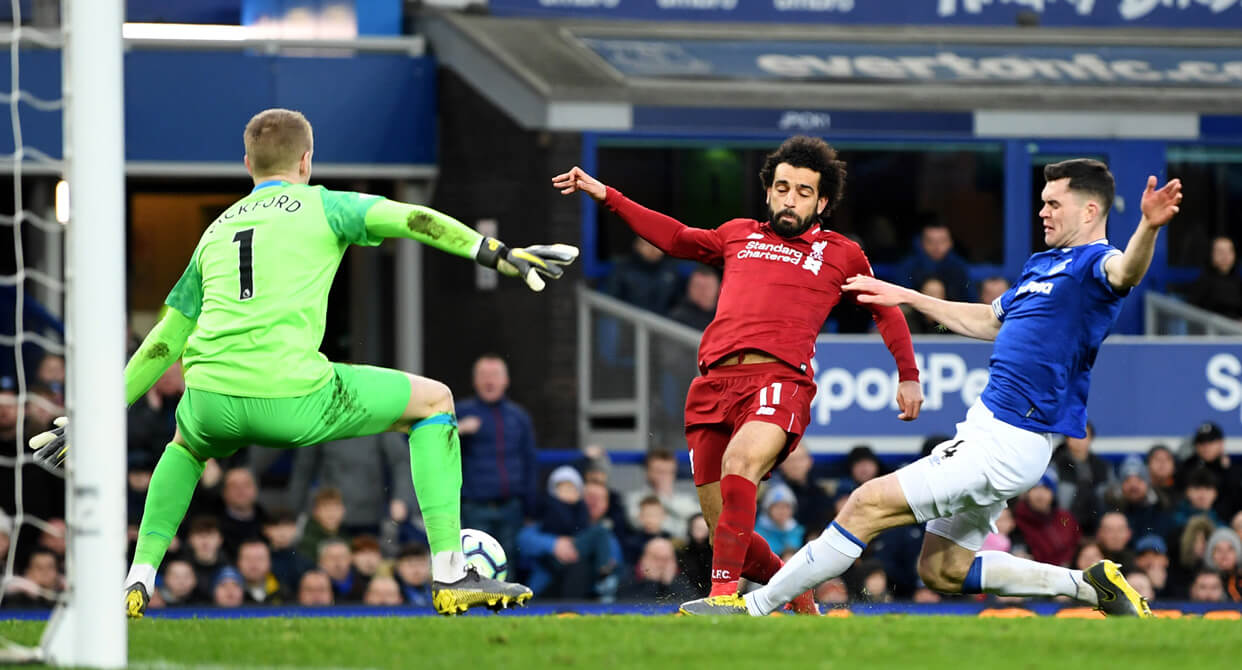 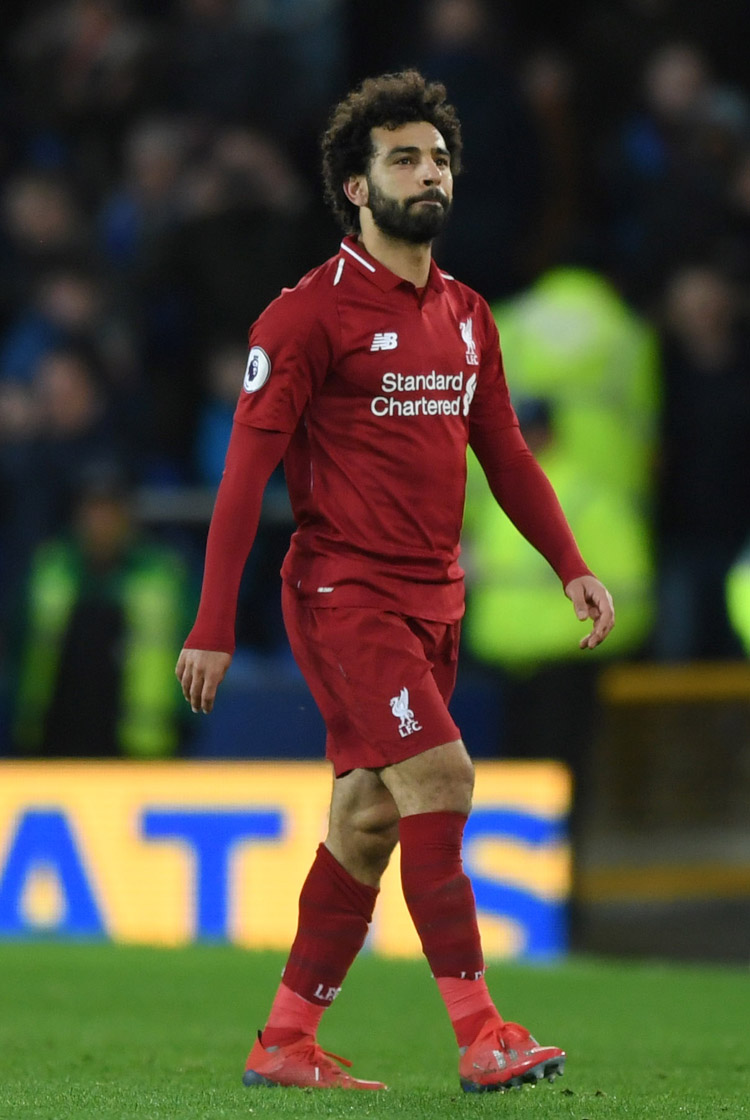 Liverpool lost top spot in the Premier League to Manchester City as they failed to score on the road for the second Sunday in a row. A week after leaving Old Trafford with a point after a frustrating goalless draw, the Reds found history repeating itself at the home of neighbours and rivals Everton. It was a game of few clear-cut chances, in truth, although a Mo Salah in top form would have taken at least one of the chances that fell his way across the 90 minutes. The home team improved in the second half, and it might be that Jurgen Klopp quietly sees this as a point gained rather than two lost. As things stand, though, Everton may feel they have contributed to their biggest rivals losing out on that elusive first Premier League title. 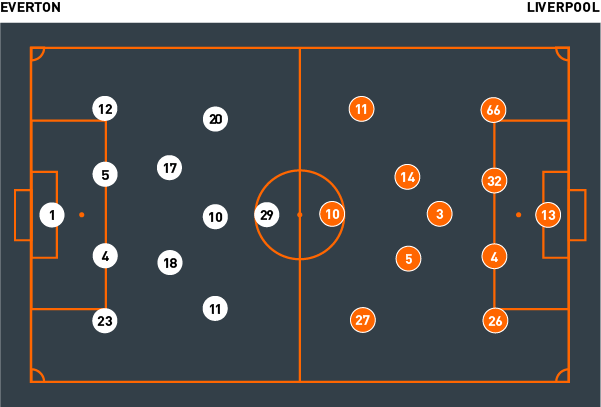 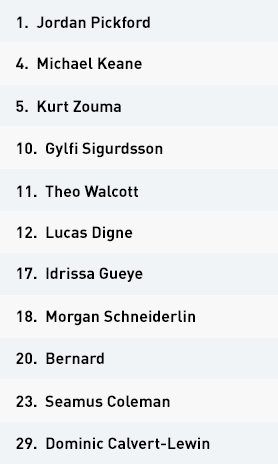 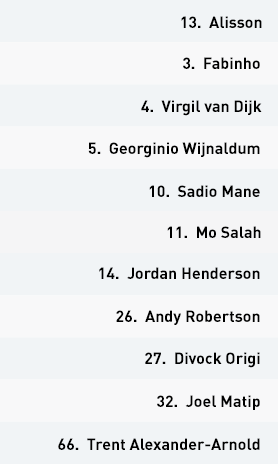 Marco Silva set Everton up in a 4-2-3-1 formation, with Idrissa Gueye and Morgan Schneiderlin as the two deep central midfielders, and Theo Walcott, Gylfi Sigurdsson and Bernard an attacking midfield trio behind Dominic Calvert-Lewin.

The hosts enjoyed only 45 per cent of possession through the game, but still tended to begin their build-up with a few short passes between goalkeeper Jordan Pickford and centre-backs Kurt Zouma and Michael Keane. The idea, it seemed, was to draw Liverpool into a high press, at which point Pickford would send long diagonal balls towards Calvert-Lewin or sometimes Walcott. The problem here was that the Everton forwards would typically be competing with Virgil van Dijk, who won the majority of these duels.

When Everton had possession with Gueye or Schneiderlin, Calvert-Lewin would look to threaten in behind with a run or drop short towards the ball. If it was the latter, then Sigurdsson would often be the one to make the run beyond.

In the second half, the hosts looked to exploit the wide areas more – particularly on the right, where Seamus Coleman was a constant presence in attack, looking to overlap Theo Walcott and later Richarlison. One of Gueye or Schneiderlin would look to get involved here too, as Everton tried to exploit the space behind Liverpool left-back Andy Robertson.

Out of possession, the Toffees dropped into a 4-4-2 formation, with Sigurdsson joining Calvert-Lewin on the top line, and Bernard and Walcott tucking in alongside Gueye and Schneiderlin in midfield. They were generally happy to allow Joel Matip and Virgil van Dijk possession, but Sigurdsson and Calvert-Lewin positioned themselves either side of Fabinho in an attempt to negate Liverpool’s three-on-two overload in central midfield.

Bernard and Walcott would then look to go and close down Trent Alexander-Arnold and Robertson when they had possession; this sometimes resulted in Sigurdsson or Calvert-Lewin pushing up to press Van Dijk or Matip should they receive the return pass. Gueye track Jordan Henderson whenever he dropped towards the ball, and Schneiderlin would do the same with Georginio Wijnaldum. Any pass into the Liverpool midfielders’ feet with their back to goal was another pressing trigger that would initiate higher pressure from the Everton players, as the hosts restricted their city rivals to only three shots on target over the whole 90 minutes.

Jurgen Klopp set up in a 4-3-3 formation in possession, with Fabinho, Jordan Henderson and Georginio Wijnaldum as a midfield three behind Mo Salah, Sadio Mane and Divock Origi in attack. The visitors had the greater share of possession throughout the 90 minutes, but had difficulty breaking down the Everton block.

There was regular circulation between centre-backs Virgil van Dijk and Joel Matip in front of the Everton front line, but progress was limited due to good organisation from their opponents. Occasionally Fabinho would drop in between Van Dijk and Matip, which allowed Andy Robertson and Trent Alexander-Arnold to push higher from full-back. When this happened, Mane would look to drop from his central attacking position into midfield to reform the overload – but this still failed to result in any consistent penetration. Liverpool soon resorted to clipping diagonal passes in behind or to Salah’s feet, and then trying to build the attack from further up. This led to occasional opportunities, but Salah in particular was wasteful in front of goal.

Due to limited space, Matip began bringing the ball out of defence more frequently. He managed to cause Everton some problems in doing so, as when one of their players left their position to press the centre-back, a space would open up behind them for Liverpool to try and exploit. As the Reds looked to progress upfield, they looked to ensure they always had five points of attack – and they would use every outfield player with the exception of Van Dijk, Matip and Fabinho to do so.

If the Liverpool front three were positioned wide and the full-backs remained deep, then Henderson and Wijnaldum would look to offer a threat between Mane and his outside attackers, forming a line of five. If the attackers were wide but the central midfielders were deeper, then the full-backs would take on this role. As Liverpool continued to struggle to break Everton down, however, they began clipping balls into the box. They mainly aimed for outside of the back post, from where they would look to head the ball across goal for a teammate to attack on the far side. The initial header across goal was rarely clean enough to set up an opportunity of any note for the second header, however, as Liverpool registered a second straight goalless draw away from home and lost top spot to Manchester City.

Out of possession, the visitors pressed in the same 4-3-3 shape. Mane was positioned between centre-backs Kurt Zouma and Michael Keane, while Salah covered Zouma and Lucas Digne on the Everton left, and Origi affected Keane and Seamus Coleman on the Everton right. Origi and Salah were there to screen the passes into the full-backs and show Everton inside, where Liverpool tended to have a central overload against Gueye and Schneiderlin, albeit also conscious of where Sigurdsson was behind them.

Klopp’s men occasionally initiated a high press, which resulted in Jordan Pickford sending long passes forward that Van Dijk and Matip would usually win in the air. The Liverpool midfield still had to be alert to picking up second balls from any headed clearances, but they stuck to their task throughout and successfully negated the hosts’ threat to keep a fifth consecutive clean sheet in all competitions.