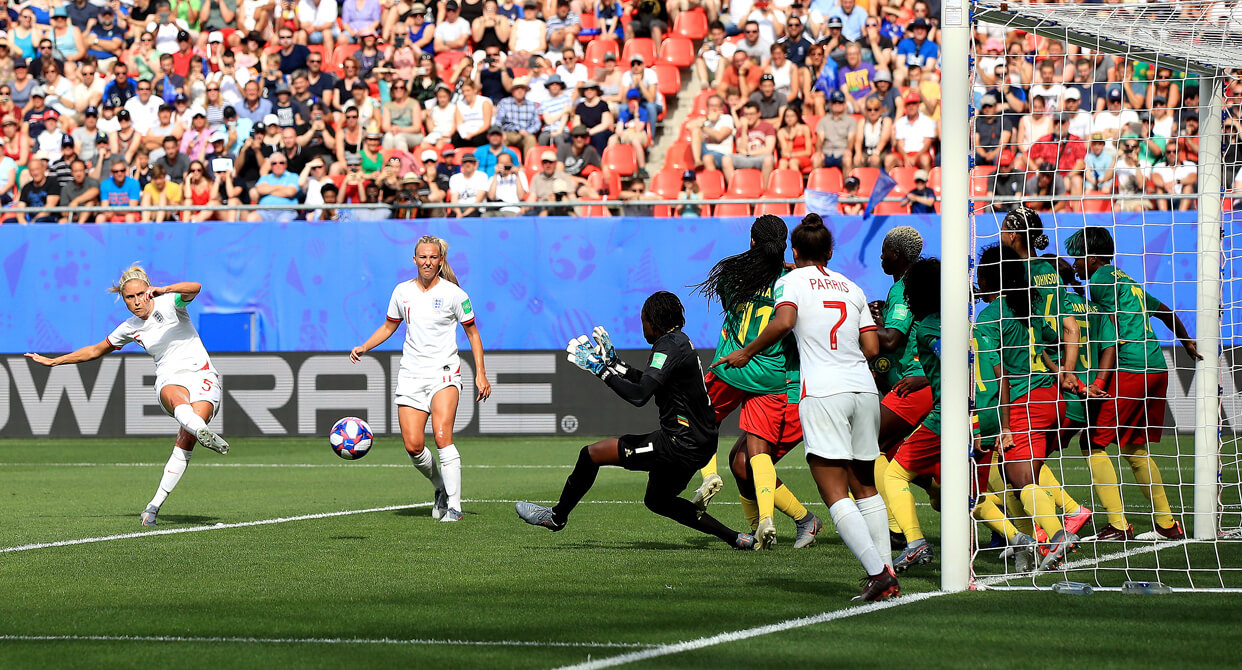 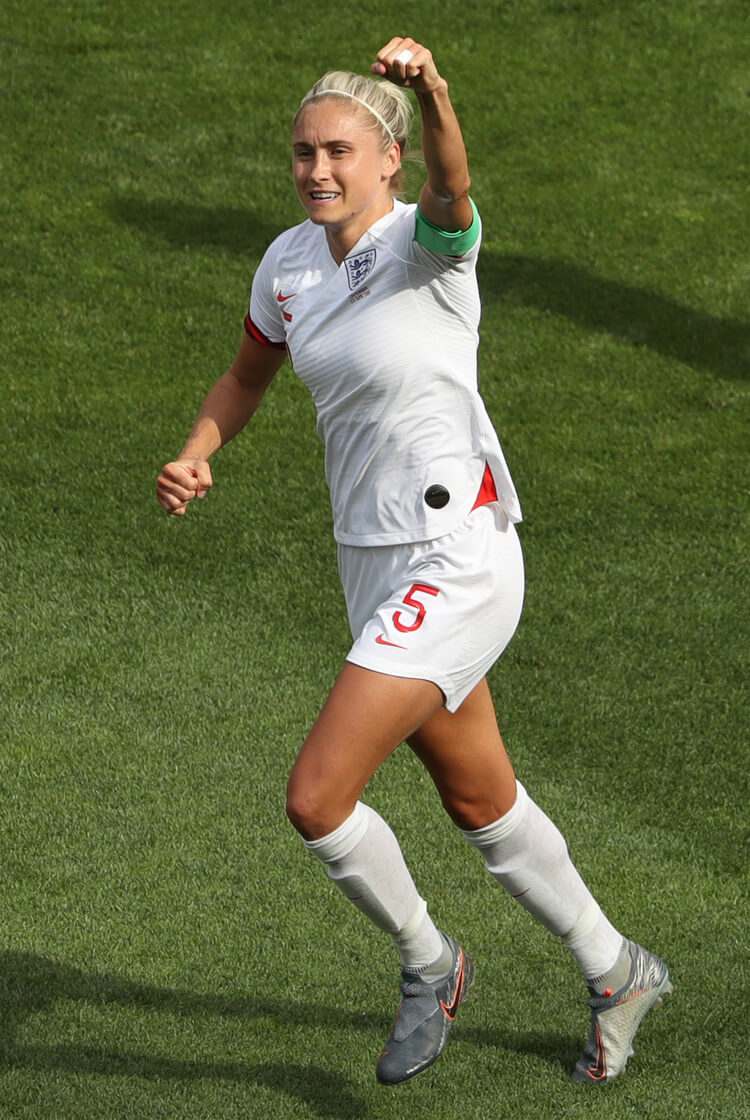 Amid often controversial scenes in Valenciennes, Phil Neville and his England team secured a 3-0 win over a furious Cameroon to progress into the quarter finals of the 2019 Women’s World Cup. The Lionesses were ahead early, when Cameroon goalkeeper Annette Ngo Ndom was adjudged to have picked up a backpass; captain Steph Houghton stepped up and drove the ball into the far corner from the resulting indirect free-kick. Cameroon were guilty of some poor discipline, and reacted with anger when England doubled their lead on the stroke of half-time; Ellen White initially looked offside when sliding home after a Lucy Bronze pass, but VAR showed her to be onside and the goal stood. VAR again intervened to rule out a Cameroon goal early in the second half, and their mood got darker still when Alex Greenwood scored a third for England just before the hour. The Lionesses were through, however, and now face Norway in the last eight. 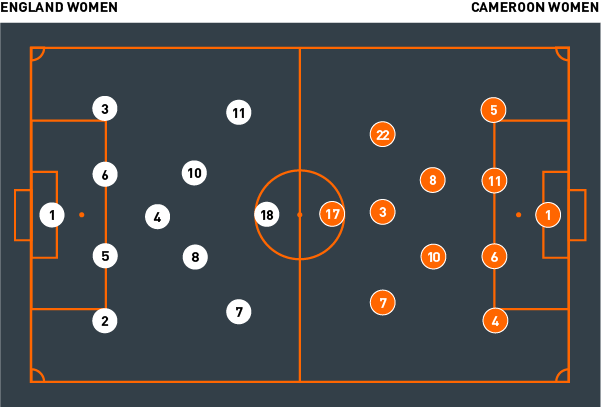 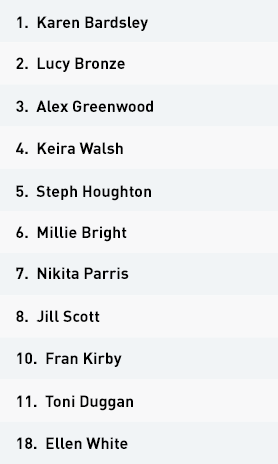 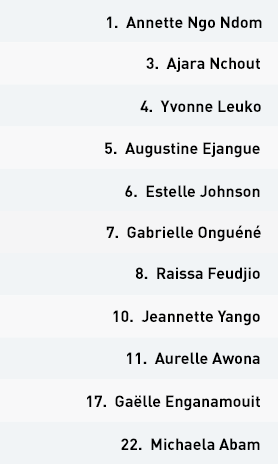 England set up in their usual 4-3-3 formation, with Fran Kirby back in her attacking midfield role alongside Jill Scott, with Keira Walsh operating as the single pivot behind them. Head coach Phil Neville went with Nikita Parris and Toni Duggan as the wide attackers, with Ellen White again selected as the lone striker.

As was widely reported, Cameroon provided England with a very physical challenge, but also one that allowed them space and time in possession when building from their own half. The Lionesses frequently created attacking overloads with numbers going forward at speed in transition, but too infrequently created goalscoring opportunities from this due to poor pass detail.

In truth, England found opportunities to penetrate all over the field. The Cameroon wingers were given sole responsibility for tracking Alex Greenwood and Lucy Bronze, but as they were often caught high on transitions the England full-backs enjoyed vast spaces in front of the opposition back line. This led to a number of three-on-two overloads in wide areas, although they didn’t create as many chance from this as they might have done.

More centrally, England were able to attack easily because of Cameroon’s man-oriented approach. The movement of their midfielders opened up spaces for others to receive beyond them; if they remained narrow, this opened up passing lines into wide areas or the half-spaces, while the lack of a Cameroon screen opened up space for passes into the feet of White. Similarly, if a centre-back drove forward in possession, this worked to attract a Cameroon midfielder and free up one of England’s three central midfielders ahead of the ball.

White was very disciplined in her role as the lone centre forward, as she focused on pulling between the Cameroon centre-backs or on to the far-side centre-back in build-up play. This allowed Kirby or Scott to utilise the space behind man-marking full-backs Yvonne Leuko and Augustine Ejangue.

Having gone ahead through Steph Houghton’s finish from an indirect free-kick early on, England took full advantage of poor Cameroon marking for their second. With left-sided centre-back Estelle Johnson pulled out of position during the England build, White found space on the edge of the box to receive from Lucy Bronze and slide home her fourth goal of the tournament. In the second half, and after an awful lot of drama, Greenwood found all the time and space she needed to divert a Duggan corner home for the contest-ending third.

Defensively, the Lionesses took up their usual 4-1-4-1 shape, which was far more compact than in previous games due to the narrowness of the Cameroon attacks. They were susceptible to quick transitions in the middle third, and gave themselves too many problems with poor passing in these areas – something they will need to improve in their quarter final against Norway.

Cameroon set up in a 4-2-3-1 shape, with the central-midfield pairing of Jeannette Yango and Raissa Feudjio sitting behind a rotating attacking line of Ajara Nchout, Gabrielle Onguene, Gaelle Enganamouit and Michaela Abam. The Cameroon players stood out for their athleticism and confidence in attacking one-on-one all over the pitch. They also provided a constant threat for the English back line on direct attacking transitions that focused mostly on central penetration, but also targeted early switches to create attacks for the far-side winger.

The attacking pattern that most stood out focused on the central forward – mostly Enganamouit or Abam – dropping between the lines to receive to feet, with the supporting players stretching the England defence. Key to this approach was Nchout, who took up the number 10 role and consistently stretched the game centrally by running beyond. Unfortunately for Cameroon, the final pass or shot too often let them down – particularly as they chased the game in the second half.

Defensively, Cameroon flipped between various shapes – at times 4-3-3, 4-2-3-1, or 4-5-1. This was decided by the attacking positions of the England full-backs and midfielders, as the Cameroon players seemed to be given man-marking roles in this respect: wingers dealing with full-backs and the midfield three, including Nchout, tracking England’s midfield trio centrally.

The man-marking approach required the Cameroon players to work extremely hard in defence, and at times they did this in an overly aggressive manner. The tactic did open up large space for England’s offensive game to excel, however; there was no screening of the England forwards, either centrally or in the half-spaces, meaning England were able to play through their opponents too easily.

When England’s full-backs pushed high, the ball-side winger would look to recover deep to help out, in effect dropping into what became a back five. Unfortunately for Cameroon, they were unable to keep England out and departed in acrimonious fashion.