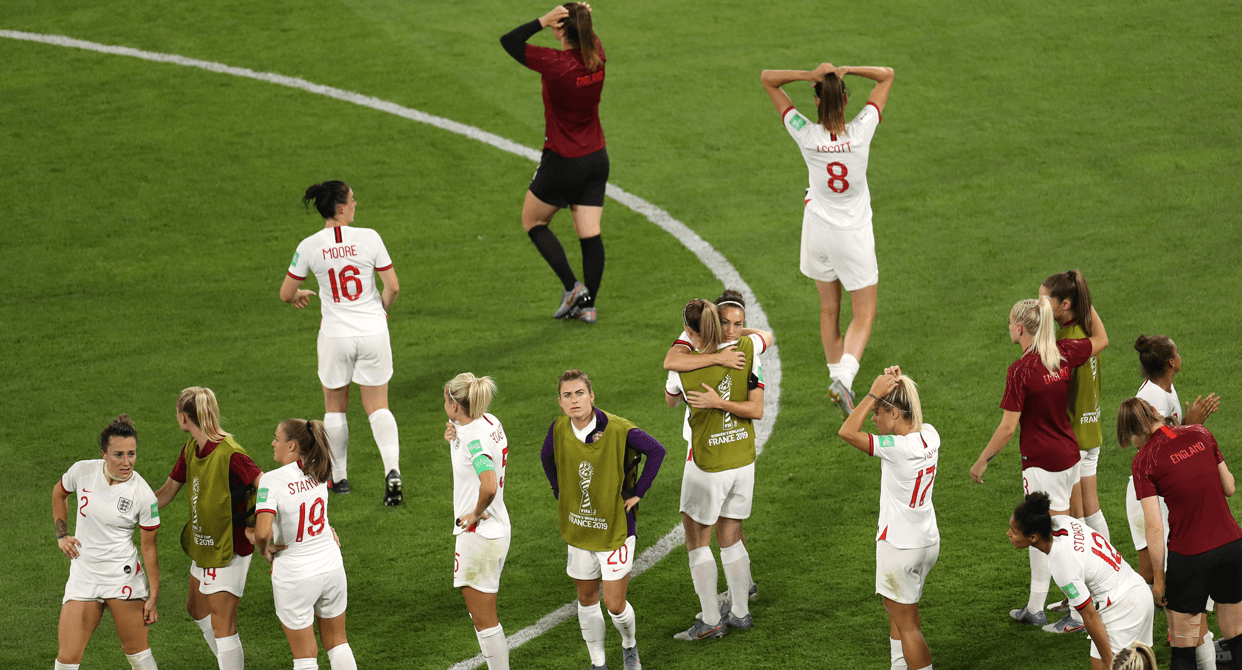 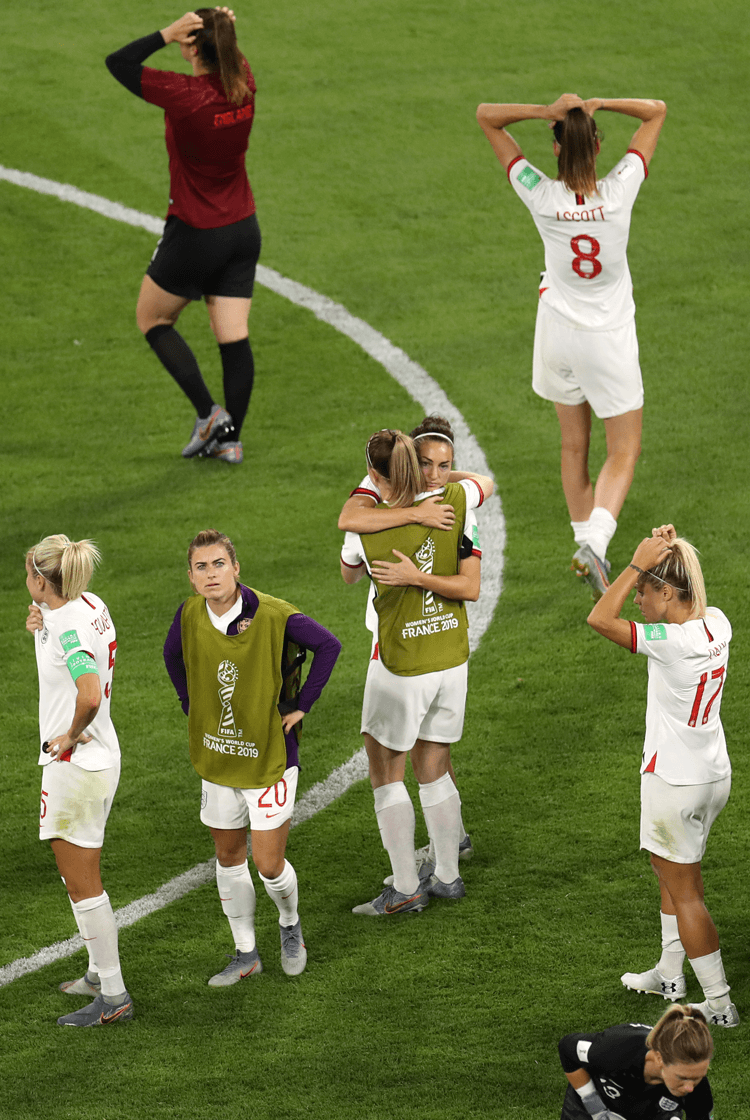 England missed out on their first ever Women’s World Cup final when they were eliminated by holders and favourites the United States after a 2-1 defeat. With captain Steph Houghton’s late penalty being saved by Alyssa Naeher, their run came to an end at the semi-final stage for a third successive major tournament. The USA had taken the lead through a Christen Press header and, after Ellen White had equalised, restored it by half-time with a further header from Alex Morgan. A VAR review then ruled out another strike from White for offside, before another awarded England the penalty Houghton missed. On another dramatic evening, defender Millie Bright was also sent off for a second bookable offence. 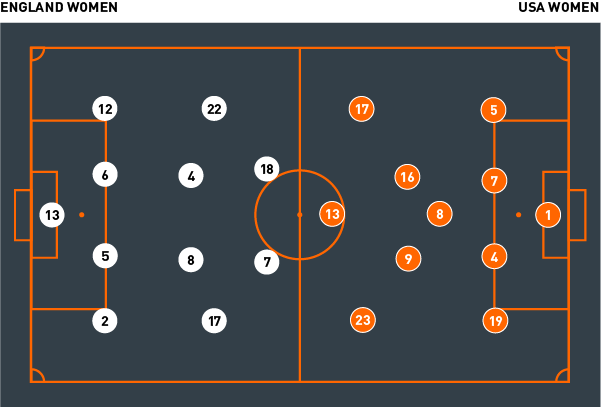 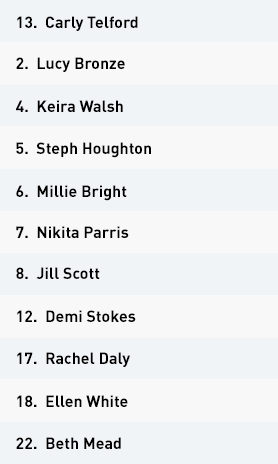 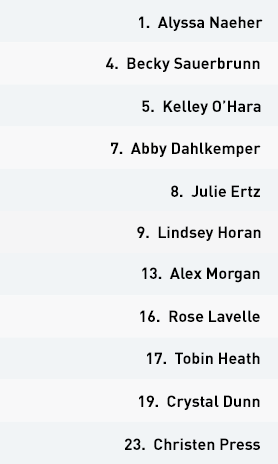 Unusually, particularly after their manager Phil Neville’s insistence that their priority was to remain committed to a philosophy that had largely been built on a 4-3-3, England adopted a 4-4-2 formation for their semi final against the United States. Ellen White was joined by Nikita Parris in a front two, while Beth Mead and Rachel Daly were selected out wide – but they often joined Parris and White high in more of a 4-2-4 in possession.

With Parris pursuing pockets of space between the lines in central areas, White withdrew to the far-side central defender when possession was wide; Parris could then use the space left by the American full-backs being attracted by Daly and Mead. Midfield playmaker Keira Walsh struggled because of the USA’s press from their five-strong midfield and screen from Alex Morgan. When she did have time on the ball, she switched play effectively to expose spaces on the far side of the USA’s narrow defence.

It was one such passage that led to England’s equaliser on 19 minutes. Walsh found Mead on the left, from where she crossed to the unmarked White – the forward had pulled behind the ball-side central defender’s shoulder and finished superbly.

Defensively, England’s 4-4-2 became a 4-2-3-1 or a 4-4-1-1, with White and Parris sharing the responsibility of marking US pivot Julie Ertz during build-up play. It was Mead failing to cover for Demi Stokes while they attempted to track Tobin Heath that led to the States taking the lead. Kelley O’Hara’s cross found the unmarked Christen Press, who had evaded Lucy Bronze and headed in at the far post.

Having equalised, Neville’s team conceded what turned out to be the decisive goal little more than 10 minutes later. They were unconvincing in protecting the half-space in front of their defence, which was created by their opponents’ front five and England’s lack of cover out wide. From this, Alex Morgan was able to take advantage and score her sixth goal of the tournament.

White had a second equaliser ruled out for offside, before captain Steph Houghton had a chance to level from the spot late on. Her spot-kick was saved by Alyssa Naeher, though, meaning the Lionesses’ World Cup run came to an end in the semi finals for the second successive finals.

The tournament favourites were set up in a 4-3-3 shape, with an expansive midfield three of Lindsey Horan, Rose Lavelle and Julie Ertz behind the fast attack of Alex Morgan, Tobin Heath and Christen Press. Morgan, the central striker, was regularly supported by either or both wide players in central areas.

While in possession, their width came from that three-strong midfield, which also gave the front three the options of playing narrowly and creating combination options out wide. It was the speed of those attacking transitions, and the numbers committed to them, that proved their most impressive trait.

The USA’s midfielders joined attacks, but when they sought a more patient build-up from defence, Ertz dropped to become the deep-lying central midfielder and make the split midfield that helped them play through England’s defensive 4-4-2. Heath was a consistent threat from the right, from where she attacked with both width and runs that took her infield, and to the extent that she essentially created the opening goal. One of her runs drew three England players, which led to the overload out wide from which Kelley O’Hara crossed to the far post for Press to evade Lucy Bronze and head in.

Their second goal was also a header, this time from a move started and finished by Morgan. Her run inside Demi Stokes meant an overload of five versus four in attack; Bronze’s uncertainty when dealing with Horan in the half-space gave the midfielder time to cross for Morgan to head home her sixth goal of the tournament.

In defence, the USA used a maximum press on goal-kicks to deter England from playing out from the back. They also dropped into a mid-block 4-5-1 shape, using a narrow defence, compact central midfield and wingers who tucked in to limit passing options for England playmaker Keira Walsh and space for the Lionesses’ dangerous attacking players. They were much happier to allow the England centre-backs time on the ball, as a result.

As in their quarter-final victory against France, the States switched to a more defensive 5-4-1 formation in the second half, in a bid to protect their lead. Despite some scares, however, they held on to qualify for their fifth World Cup final in eight tournaments.