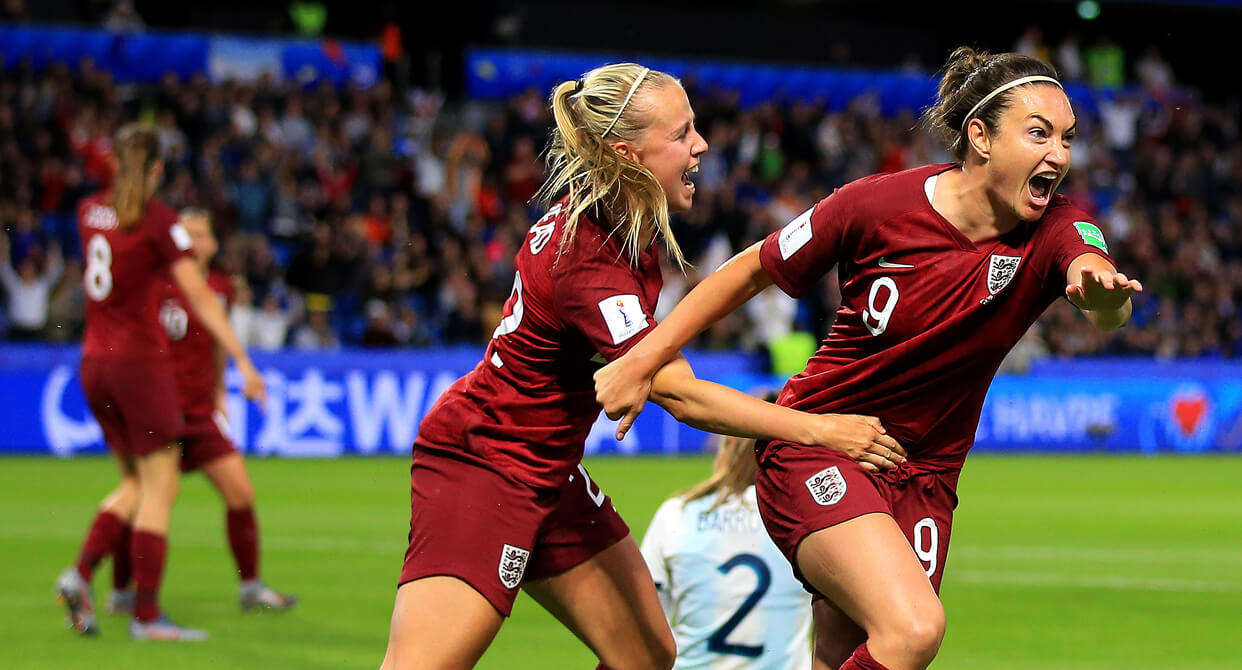 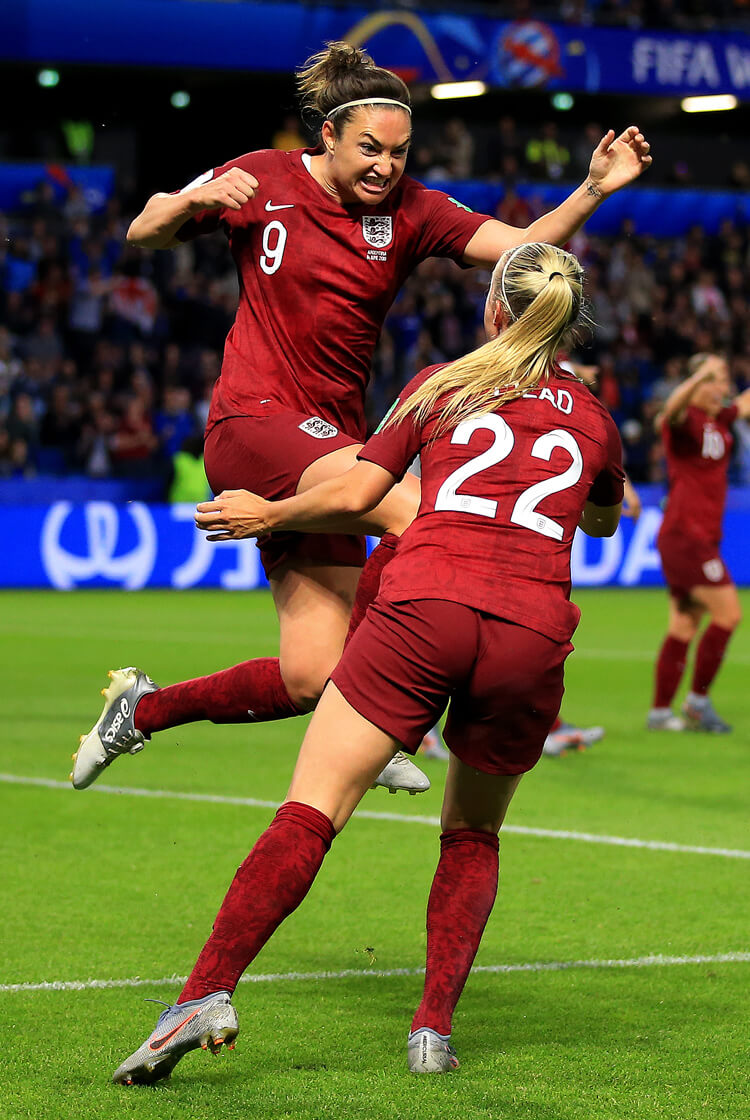 England made it two wins from two at the 2019 Women’s World Cup, although they were made to work hard for all three points by a determined and well-organised Argentina in Le Havre. Phil Neville’s side dominated possession throughout, and looked to be heading for a first-half lead when Alex Greenwood was tripped by Ruth Bravo in the Argentina box – but Nikita Parris couldn’t follow up her successful spot-kick against Scotland, seeing her effort saved by an inspired Vanina Correa. The Argentina goalkeeper was finally beaten just past the hour mark, when Greenwood again broke free down the England left and crossed for Jodie Taylor to slide in her first of the competition. The Lionesses are now certain of their place in the last 16, with their final group fixture against Japan deciding where in Group D they finish. 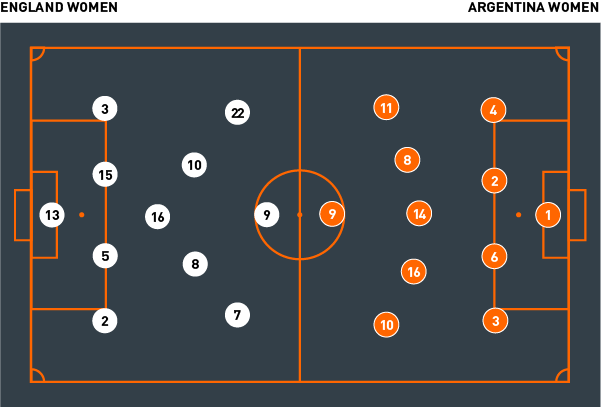 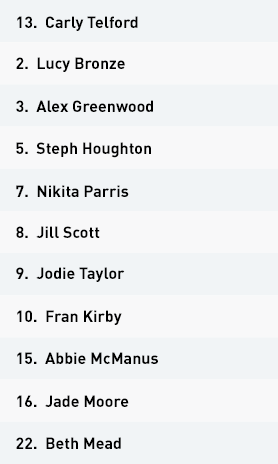 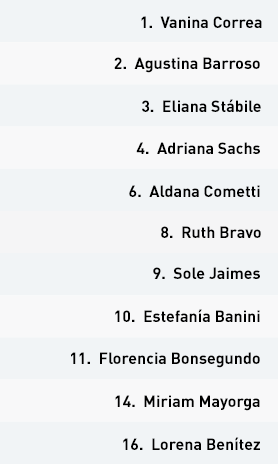 England set up in 4-3-3 formation in possession, with Jade Moore – introduced to the starting line-up for Keira Walsh – operating as a single pivot behind Jill Scott and Fran Kirby. Jodie Taylor came in for Ellen White as the central striker, while Carly Telford started in place of Karen Bardsley in goal.

The Lionesses dominated possession without creating too many clear chances in the first half. Moore enjoyed plenty of time and space to receive centrally from both centre-backs, and looked mostly for short passes to try to break the lines – but a disciplined and organised low Argentinian block rotated efficiently to deal with this in central areas.

England varied their play and tried to create three-against-two situations in wide areas, featuring the full-back, wide attacker and advanced central midfielder on that side. The right-sided combinations of Lucy Bronze and Nikita Parris had been to the fore in the opening group win over Scotland, but against Argentina the left-sided pair of Alex Greenwood and Beth Mead were just as effective. It was a combination between the two, after a crossfield ball from Steph Houghton, that led to Greenwood drawing a foul from Argentina midfielder Ruth Bravo in the penalty area. Unfortunately for England, goalkeeper Vanina Correa tipped Nikita Parris’ spot-kick superbly on to the post.

The Lionesses also looked to flatten their ball-side full-backs, to draw out Argentina’s compact midfield and try to exploit space behind their wide players. Their opponents’ disciplined covering – their central players slid over effectively to cover any vacated spaces around them – meant England had very little joy in the first half, however.

Neville’s team also struggled to utilise their pace in transition, where Argentina showed great discipline and speed to recover into their low block. Once Argentina started to commit more numbers forward in attack in the second half, they became more susceptible to quick transitions – and it was from one such transition just past the hour that England scored what proved to be the winning goal. Scott and then Kirby drove forward in central areas before the latter played wide to Mead – with the Argentina defence typically narrow, Mead was free to place her cross perfectly for Taylor to finish first time.

Out of possession, England were very infrequently challenged. When this did happen, it usually came from quick attacking transitions into Argentina central forward Sole Jaimes. She had very few support options, however, with wide midfielders Florencia Bonsegundo and Estefania Banini trying but mostly failing to join her in time to threaten an otherwise unruffled England defence.

Underdogs Argentina set up in a very structured 4-5-1 formation that allowed them to limit England’s threat on goal but gave them limited options to build play effectively. They were compact across the pitch, but committed very few numbers forward – instead, they looked to play direct into lone striker Sole Jaimes, who was tasked with holding up play until support arrived from midfield. Unfortunately for Argentina, this support was usually too slow and in too few numbers to cause England any real problems. Wide midfielders Florencia Bonsegundo and Estafania Banini were the main candidates here, but such was England’s dominance in possession they were often starting their support runs from too deep.

Defensively, however, Argentina showed phenomenal discipline for much of the game. Their 4-5-1 shape allowed them to maintain a compact back four while effectively dealing with any threat in wide areas, where Bonsegundo and Banini worked hard to support their full-backs. Central midfielders Lorena Benitez, Miriam Mayorga and Ruth Bravo were responsible for the half-spaces, where the job was to prevent either of England’s advanced central midfielders, Jill Scott and Fran Kirby, or wide attackers Nikita Parris and Beth Mead, from finding space. On one of the very few occasions England were able to get in behind the Argentina defence, Alex Greenwood drew a foul from Bravo in the area – but goalkeeper Vanina Correa, who was superb throughout, denied Parris from the spot.

Conversely, Argentina were happy to allow single pivot Jade Moore space to receive in central areas, only really looking to affect her if she drove forwards with the ball. Their focus was instead on limiting her options, and making sure that the half-spaces and wide areas ahead of her were well covered. This priority proved extremely effective until they committed more numbers forward in the second half, which opened up more space between their lines and reduced their effectiveness in defensive transitions. A less compact shape left them more susceptible to fast counter-attacks, which is exactly how England scored what turned out to be the winning goal after 61 minutes.

Once they went 1-0 down, Argentina stepped up their pressing line slightly to allow their central forward to affect the England centre-backs and their midfield to affect England’s deepest midfielder. This allowed England to utilise the increased space between units, however, and created continuous waves of attacks during the last 20 minutes of the game. The score remained the same, however, and Argentina retain hopes of qualifying if they can beat Scotland in their final group game.