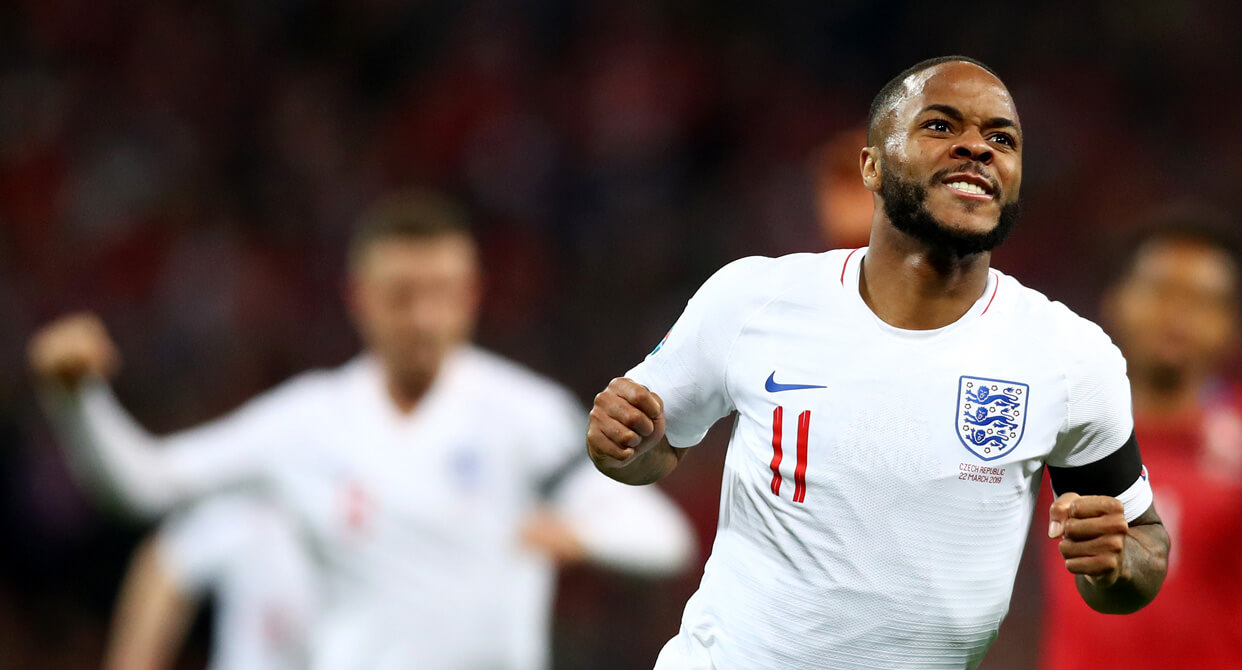 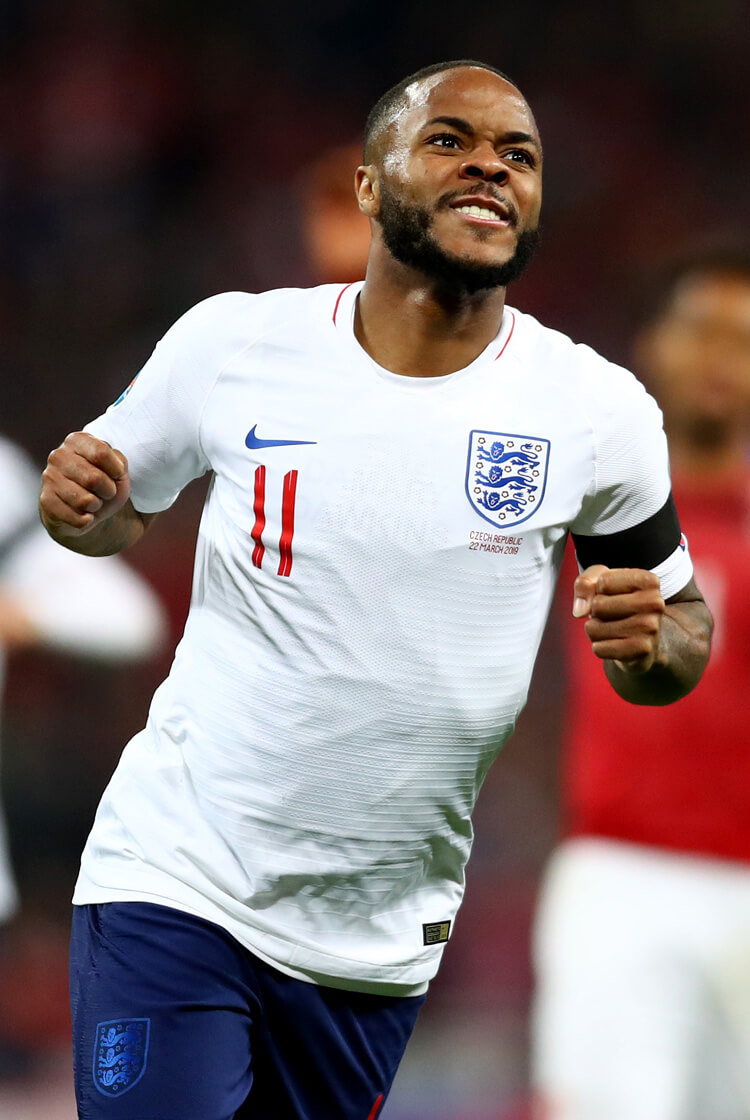 England kicked off their Euro 2020 qualifying campaign with a resounding and convincing win over the Czech Republic on an impressive Friday night at Wembley. The Czechs have been ever-presents at the Euros since their run to the final of Euro ’96, but they were outclassed by Gareth Southgate’s young team on a night when Raheem Sterling was the undoubted star. The Manchester City attacker opened the scoring on 24 minutes, sliding in to meet a Jadon Sancho cross from close range, before going on to complete a first England hat-trick at Wembley since Jermain Defoe’s three-timer against Bulgaria in 2010. Harry Kane, from the penalty spot, and Tomas Kalas, into his own net, were the other goalscorers as England laid down a strong marker in advance of June’s Nations League semi against the Netherlands. 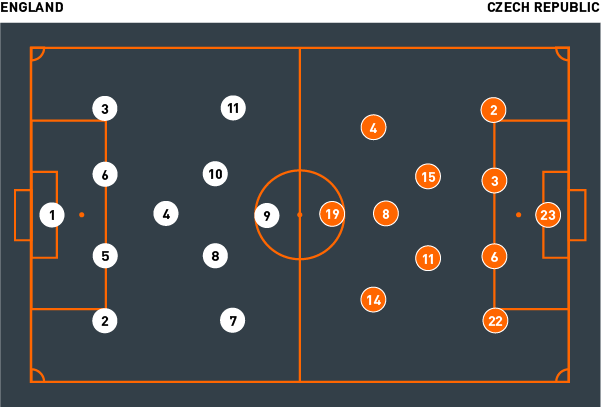 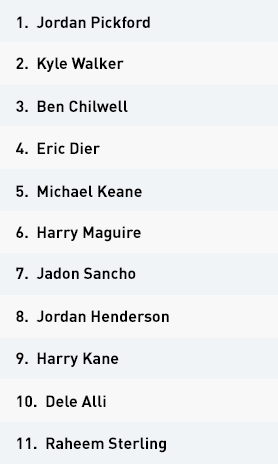 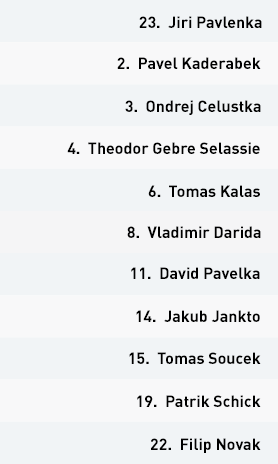 Gareth Southgate set England up in a 4-1-4-1 formation initially, with Eric Dier as the deep-lying central midfielder behind Jadon Sancho, Jordan Henderson, Dele Alli and Raheem Sterling, and Harry Kane as the central striker. After Dier had to be withdrawn injured early in the first half, Henderson dropped in to the deeper position and Ross Barkley entered in the more advanced role.

The hosts looked to play forward as early as possible in possession. If the first ball upon regain didn’t break a line, then the second almost always did as England looked towards their creative attacking players. One common pattern was for Kane to drop off the top line and look to receive the ball to feet. This was the trigger for one or more of the attacking midfielders to make runs beyond Kane and into the space behind the Czech defensive line. This wasn’t exclusive to the wide attackers Sterling and Sancho, although they were the pair who combined in exactly this way for the opening goal.

Henderson, Barkley and Alli all made runs in behind as well, with England looking to take advantage of the Czechs’ heavy focus on tracking runners by moving them away from their defensive units and creating spaces to play through. Sometimes Kane would make these movements towards the ball and the attacking midfielders would make their runs beyond, with the deeper players looking to miss Kane out and find the penetrative runs directly. These tended to be overhit, however, so the hosts reverted to linking play through Kane.

It wasn’t just Kane who dropped towards the ball, though. Sancho and Sterling rotated with Barkley and Alli respectively, where the inside midfielders made higher runs and the wide players dropped deeper. Alli dropped deeper than Barkley to help with the build, as Henderson was often under close attention from the Czechs’ front two. England had lots of possession and had to be patient with their circulation and looking for gaps; it tended to be the movement of the players rather than the speed of the ball movement that unlocked the visitors, with England pulling opponents into positions that left large spaces through which to penetrate.


Out of possession, England spent large parts of the game pressing aggressively and high up the pitch – but towards the end of the game they moved into a 4-1-4-1 mid-block as they looked to conserve energy with the game won. When they did press, Sancho would look to affect the left-sided centre-back with Kane alongside him; if the ball then moved to the left-back, Henderson and later Barkley would move out to press him. Sterling and Alli performed the same functions on the opposite side.

Once the ball was out towards the touchline, England looked to close in from all angles to ensure that the Czechs couldn’t get out. If Sterling or Sancho were beaten in the press, then they would look to back-tackle, helping out Ben Chilwell and Kyle Walker and forcing the Czechs into quicker decisions under high pressure – which often led to turnovers. In the 4-1-4-1 phase, England would sit deeper and allow the back four to have possession. The trigger to initiate a higher press would be either the ball into an advanced full-back or a vertical pass into one of the central midfielders. The Czechs failed to consistently trouble the England defence, however, as the hosts ran out easy winners in their opening Euro 2020 qualifier.

The Czech Republic set up in a loose 4-2-3-1 formation, with Tomas Soucek and David Pavelka generally operating as the two deep central midfielders, while Theodor Gebre Selassie, Vladimir Darida and Jakub Jankto (Matej Vydra in the second half) supported Patrik Schick in attack.

The visitors tended to concede possession and looked to play on the counter-attack. Their structure in possession was somewhat inconsistent and lacked balance, leading to very few passages of play in the first half that created anything of note. They mostly went direct to Schick, who would receive with his back to goal and try to link play with his attacking midfielders – but they rarely managed to secure the second ball and would have to drop into their defensive shape again.

Darida often found himself in deeper positions, with one of Soucek or Pavelka pushing on – not so much to try and move the England players around, but more as a result of where and when they managed to regain possession. Full-backs Pavel Kaderabek and Filip Novak did try to push forward and provide width when in possession, with the former in particular looking to supply crosses from deep for Schick to attack.

Out of possession, the Czechs operated in a 4-4-2 structure for the majority of the game. Darida joined Schick on the top line, while Selassie and Jankto tucked in alongside Pavelka and Soucek in a midfield four. They allowed England’s centre-backs to bring the ball out, with Schick and Darida looking to occupy Dier (then Henderson) rather than press the ball. The pass into Kyle Walker or Ben Chilwell would initiate a press from Selassie or Jankto, while one of the top two pushed up to discourage an immediate return pass into Michael Keane or Harry Maguire.

The visitors were very man-oriented in the first half, and looked to follow their runners as closely as possible. While this ensured that the England players rarely received the ball free, it also enabled the hosts to drag their opponents away from their units and create gaps to play through.

In the second half, the Czechs moved to more of a 4-4-1-1 shape out of possession, with substitute Matej Vydra occupying Henderson, Pavelka moving out to the left side of midfield and Darida tucking in to central midfield alongside Soucek. Schick stayed high and acted as an outlet for when the ball was cleared. The Czechs operated in a lower block in these stages and tried to restrict the space in between and behind the lines, operating in a less man-oriented manner than they had in a damaging first half.