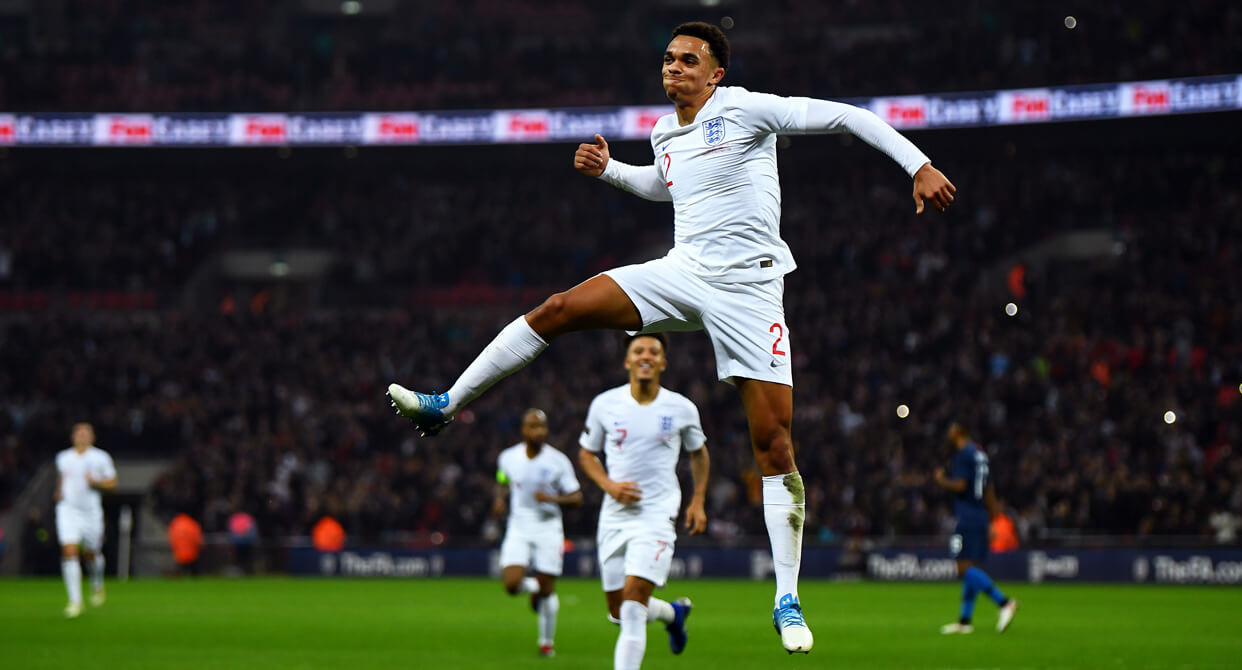 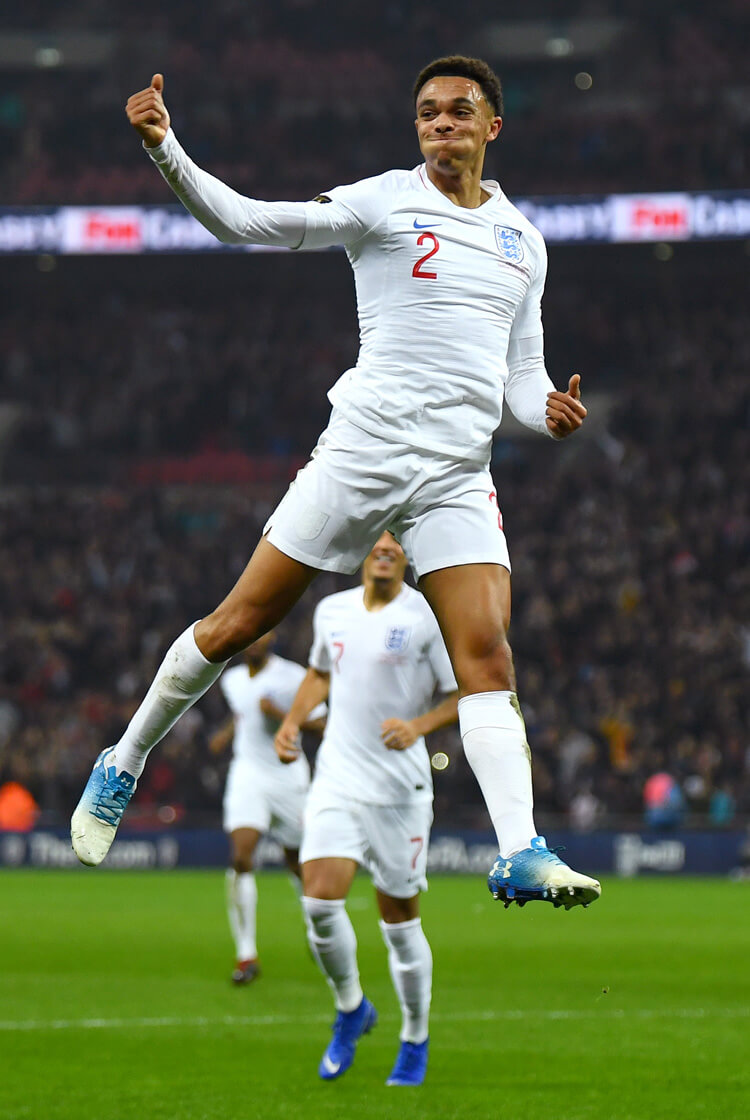 Wayne Rooney was the headline act on the night he wore the England shirt for the final time, but it was goals from three of Gareth Southgate’s new generation that saw the national team stroll past the United States at Wembley Stadium. Jesse Lingard got the ball rolling on 25 minutes, receiving a Dele Alli pass before curling a beauty beyond Brad Guzan. Liverpool right-back Trent Alexander-Arnold scored his first international goal just two minutes later, driving home a low shot after being played in by the livewire Jadon Sancho – and debutant Callum Wilson joined the party with a neat near-post finish 15 minutes from time. Substitute Rooney was granted a predictably warm reception when brought on in the second half, but he is now a part of England’s past – he, like the rest of us, can look to the future with some optimism. 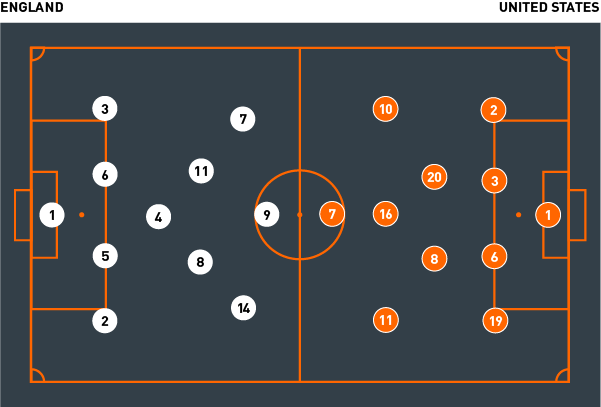 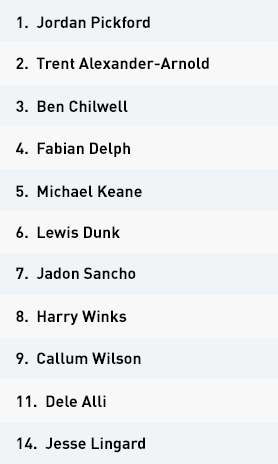 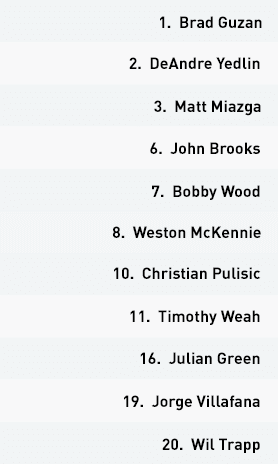 England set up in a 4-3-3, with captain Fabian Delph sitting behind Harry Winks and Dele Alli in a three-man midfield. In possession, Delph dropped into the back line, filling in between centre-backs Lewis Dunk and Michael Keane, while Winks remained slightly deeper in central midfield and Alli moved higher. Bournemouth’s Callum Wilson made his first international start as the central striker, supported from wide by Jesse Lingard and Jadon Sancho.

England’s attacking rotations on the left differed from those down the right. On the left, Sancho would drop towards the ball as it switched across the back line and into left-back Ben Chilwell, taking his opposing full-back with him. This allowed Alli to latch on to through balls in the space behind, although after a while his runs were well tracked by central midfielder Wil Trapp. This then created space in the central lane for England to find the feet of Callum Wilson dropping short, or Jesse Lingard drifting in from the right.

From the right, Harry Winks dropped into a false full-back role, pushing Trent Alexander-Arnold higher to fulfil almost the same role as Sancho from the left. This allowed Lingard to make the same penetrating runs as Alli, or Callum Wilson to spin in behind from the right inside channel. Wilson’s early run in just that area could have drawn a penalty from a clumsy-looking Brad Guzan challenge.

Sancho’s influence on the left, where his dribbling consistently pulled defenders towards the ball, created more space for Alli and Lingard – and it was the latter who benefited when curling the hosts into the lead from the edge of the penalty area, having been supplied by the former, after 25 minutes. England doubled their lead only two minutes later, as Alexander-Arnold took advantage of the visitors’ narrow back line to overlap around Sancho and arrow home a low shot.

Failing to reassert their dominance in the second half, England made a host of changes. Wayne Rooney was introduced on the left of the midfield unit, although he moved around as the home team sought to get their all-time leading scorer on the ball where possible. Crucially, with the introductions of Jordan Henderson and Eric Dier into central midfield, England lost the ability to create wide overloads. Wilson did finally grab a goal, however, as his persistent near-post runs brought deserved reward with a late poke home from Delph’s cross.

Without the ball, England formed a 4-1-4-1, with Delph protecting the central lane behind a flat unit of four. Alli and Winks remained central, with Lingard and Sancho defending the wide areas. The hosts were impressive during moments of transition, as their midfield unit swarmed any loose ball. Delph would step forward to block access into Julian Green in the number 10 position, while the four in front of him pressed as one to nullify any potential counter-attack from the visitors.

As England’s attack focused solely on wide areas, the USA failed to take advantage of the exposed central spaces. Instead, the visitors tried to build patiently, utilising their central defenders in particular. From here, Alli or Lingard would step up to help Wilson press high – although they failed to block access into Trapp, whose influence on the game grew with time.

This continued into the second half, as the visitors’ central midfield worked to link their play from back to front with more consistency. England remained in their mid-block, but it was now much deeper as they often failed to regain the ball and instead looked just to protect their lead.

The United States set up in a 4-2-3-1, with Weston McKennie and Wil Trapp operating as a double pivot in front of the back four. In possession, one of the two would drop towards the back line, allowing full-backs DeAndre Yedlin and Jorge Villafana to step into the next line. Julian Green operated as a number 10, in the centre of the attacking midfield line of three and behind main striker Bobby Wood.

Despite initially lacking any real form of first-half possession, the visitors created the first major chance of the game. Christian Pulisic drifted infield from his wide-right starting position and received a splitting pass in behind Fabian Delph. Pulling the defence towards him, Pulisic ended up running on to his own pass before placing his shot too close to England goalkeeper Jordan Pickford.

As England began to focus on wide combinations, the USA now had a much clearer opportunity to transition forward. With the likes of Alli and Lingard running in behind and wide, the hosts’ midfield had fewer men available to counter-press in central areas should they lose possession. With Green continuing to drop short, clearer access was available into Wood – but the forward’s hold-up play was poor. Unable to penetrate on the break, the States were forced to restart with builds from the back.

Trapp’s influence in possession did help them gain a foothold in the game and stem England’s attacks. The Columbus Crew midfielder dropped deeper to collect from his back line and looked to hit whichever flank looked more promising for the visitors. In the second half, Trapp’s midfield partner McKennie moved closer to the back line and drove forward with the ball in a bid to draw England’s left-sided midfielders out of shape. The States could then look for Yedlin, as he moved forward from right-back, Timothy Weah, now moving inside from the right, or the deeper-dropping Wood.

The USA pushed Yedlin much higher in the second half, as clipped passes over England’s compact block proved a successful method of penetration. With Weah dragging England’s converted left-back Delph inside, Yedlin found space in the wide areas – forcing the newly introduced Wayne Rooney to sprint back and cover. Direct passes forward continued, as the USA centre-backs could now comfortably step into midfield, with England’s forwards sitting deeper. They eventually lost their rhythm, however, with a flurry of substitutions killing momentum.


Out of possession, the States set up in a narrow 4-4-2 structure and looked to restrict England’s central play. From here, they were vulnerable to runs and passes in between their centre-backs and full-backs, as their flat units left gaps to be exploited. The more England penetrated their opponents’ rigid structure, the narrower it became, allowing even more space in wide areas.

With a flat 4-4-2 up against a fluidly rotating 4-3-3, the visitors were faced with constant overloads no matter how hard they worked. Choosing to remain narrow led to overloads in wide areas, with their full-backs repeatedly exposed against the likes of Sancho, Alli and Lingard.

The USA’s best form of defence eventually proved to be attack, as they built moves with patience and looked to control more of the ball. From here, this naturally meant England saw less of the ball, allowing a harassed American back line some respite on an otherwise uncomfortable evening.