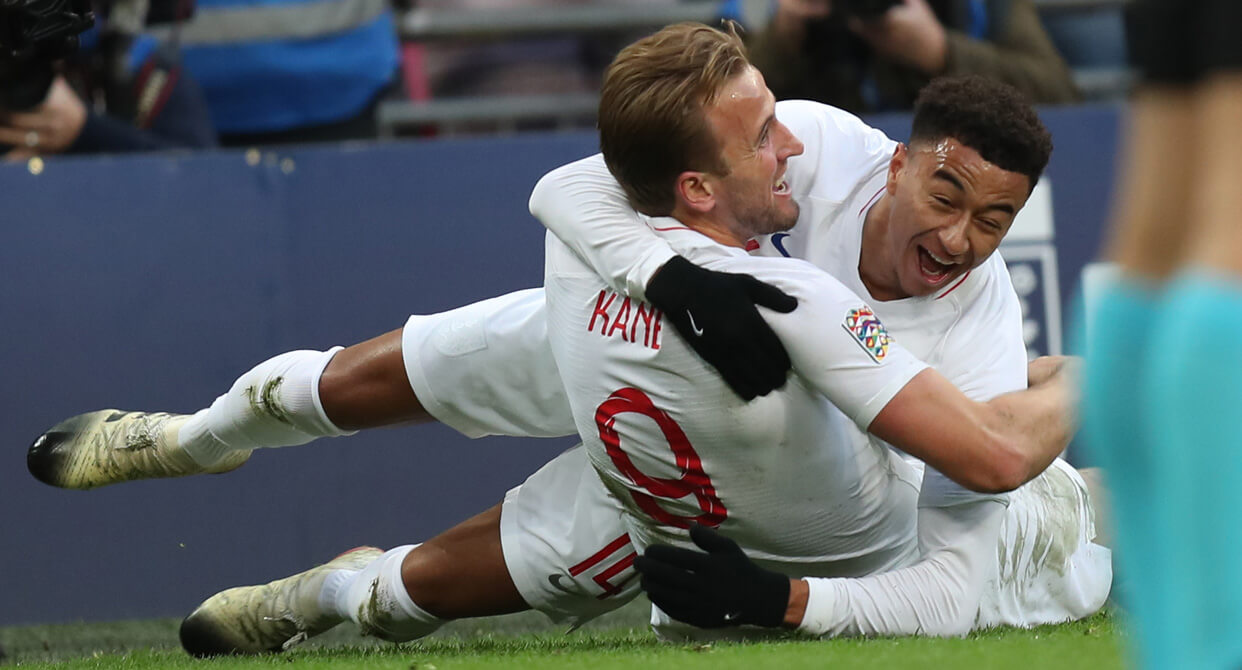 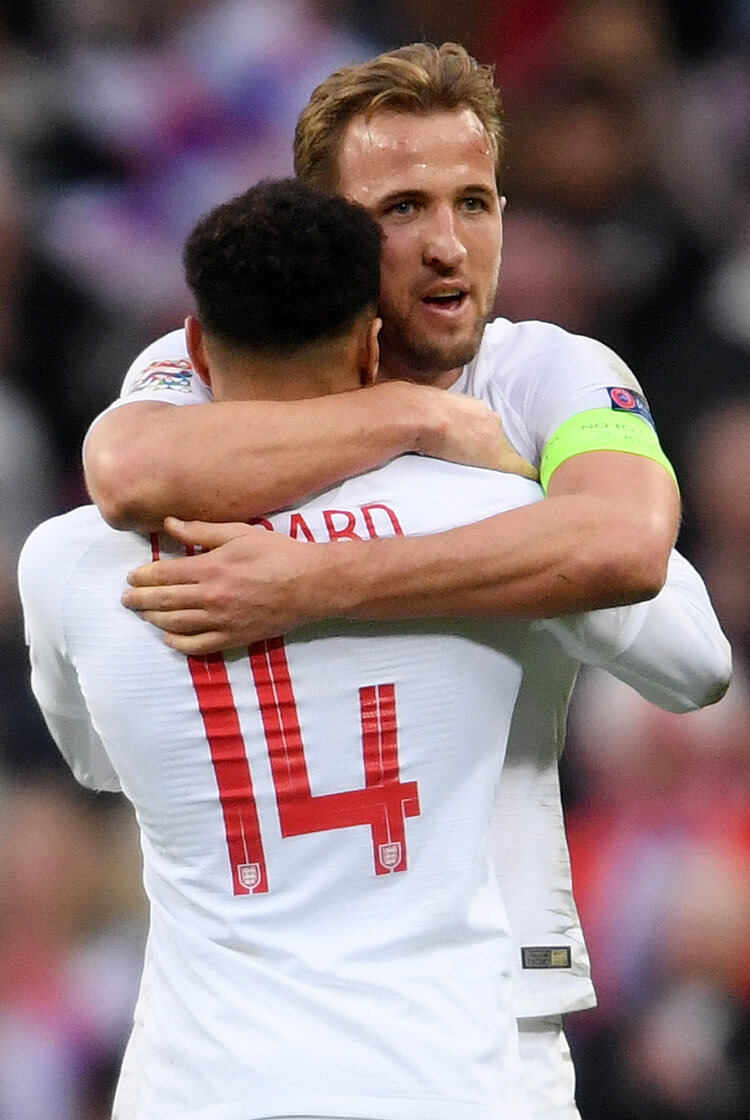 England turned Nations League relegation into qualification for next summer’s semi finals during a dramatic last 15 minutes of their decisive group match against Croatia at Wembley. Despite dominating a first half in which both Raheem Sterling and Harry Kane should have scored, the hosts found themselves behind early in the second half when Andrej Kramaric was given way too much time and space to fire a deflected shot past Jordan Pickford. Gareth Southgate turned to his bench, including Borussia Dortmund teenager Jadon Sancho, in a bid to turn the game around, but in the end it was two set-pieces that saved England’s blushes. Substitute Jesse Lingard tapped home the equaliser after Kane had poked Joe Gomez’s long throw-in towards goal, and the captain himself struck five minutes from time; his last-ditch connection with a Ben Chilwell free-kick saw England pip Spain to a semi-final spot, and condemn their World Cup conquerors Croatia to relegation. 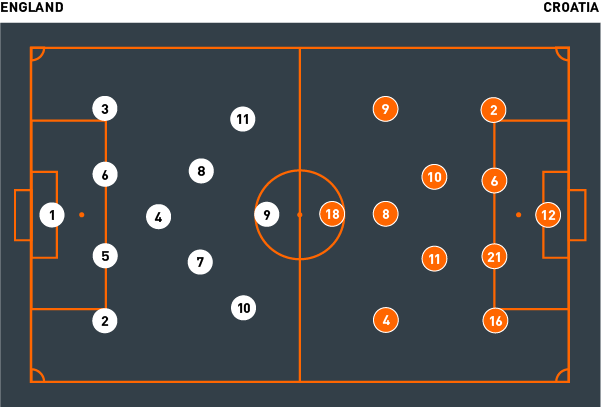 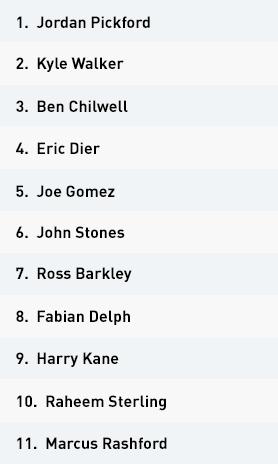 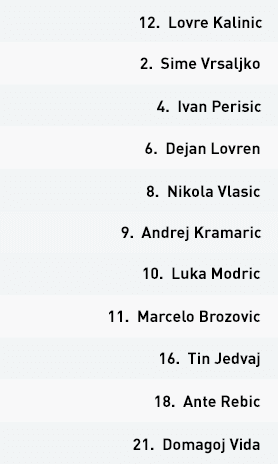 The hosts utilised a 4-3-3 attacking shape, as Gareth Southgate made a host of changes to the England team that had defeated the United States three days earlier. In the early stages, when England dominated the ball, both Kyle Walker and Ben Chilwell moved high in attack from full-back. Raheem Sterling and Marcus Rashford would then step inside, looking to receive and dribble within either inside channel. Eric Dier dropped into England’s back line, with the remaining midfielders – the impressive Fabian Delph and Ross Barkley – strategically placed around the sides of Croatia’s double pivot in what at times resembled a 3-4-3.

Croatia continually looked to block access into Harry Kane’s feet, but with Kane dropping deeper during England’s short build, Rashford and Sterling could make runs into the central lane and create a front two. It was Kane himself who, after drawing Dejan Lovren out of shape, put Sterling through on goal, but the Manchester City forward hit his effort straight at Lovre Kalinic. Kane should have put England ahead from the following corner, but slipped when trying to connect at the far post.

Delph’s quick feet and fluid movement in central midfield allowed England to consistently progress the ball from defence into midfield, and then into the final third. Sterling’s direct running across Croatia’s back line was proving a direct yet efficient method of penetration, as he was once more put in behind before being clattered by the sweeping Kalinic. Kane had two subsequent attempts blocked by a desperate Croatian back line.

England displayed flexibility in their 3-4-3 shape with the ball. If Dier stayed out of the back line, Walker remained deeper on the right side of the back three, with Sterling providing width and Barkley stepping higher to fill the space between Croatia’s left-back and centre-back. Should moves break down here, however, they lacked pace in their counter-press.

England’s aggression with the ball continued into the second half, as Rashford repeatedly drove inside Croatia’s makeshift right-back Antonio Milic. With Chilwell overlapping, Rashford could receive away from pressure and use his speed to penetrate though the Croatian defence. His subsequent distribution was inconsistent, however – perhaps a consideration when Southgate replaced him with Jadon Sancho late on.

After going behind to a surprise Croatia goal, England also introduced Dele Alli and Jesse Lingard to give a stronger attacking presence in midfield. Vertical runs forward from both helped create more space for Sterling and Sancho to attack their markers, but England still couldn’t score in open play. A routine long throw-in from Joe Gomez found Kane, whose slow-motion effort was tapped home by Lingard – and then the captain struck himself, poking home Chilwell’s dipping free-kick for his first England goal since the World Cup quarter final against Colombia. The hosts intelligently killed the game off to secure their place in next summer’s Nations League semi finals.

Out of possession, aggressive counter-pressing from the England midfield ensured Croatia failed to sustain any periods of possession in the first half. Both full-backs worked hard on their recovery runs despite playing so high up the pitch, although they were helped by the visitors’ lack of speed in transition.

The hosts’ fluidity did cause them problems, particularly when Sterling moved away from a central position. This slowed England’s counter-press and enabled the Croatian double pivot of Luka Modric and Marcelo Brozovic to sustain possession more easily, thus limiting the frequency of England’s attacks.

The hosts were exposed more frequently to Croatian counter-attacks in the second half, but once they fell behind the introduction of Alli, Lingard and Sancho brought fresh energy to their counter-press and enabled consistent regains in midfield. From there, England halted Croatian progress and reasserted the momentum they needed to drive their late and dramatic fightback.

Zlatko Dalic set his Croatia team up in a 4-2-3-1 formation, with Luka Modric moving alongside Marcelo Brozovic in a double pivot. Their first counter-attack came from an England free-kick deep in their half, as they looked to attack the spaces in behind the hosts’ advancing full-backs.

It took until the 20-minute mark for Croatia to form an open-play attack after a short spell of possession. Long balls forward nullified England’s counter-pressing midfield, as lone striker Ante Rebic made diagonal runs away from goal and into the spaces again behind England’s full-backs – particularly behind Kyle Walker on the England right. From here, he could combine with Ivan Perisic and provide attacking crosses into England’s penalty area – where the visitors badly miss the presence of the recently retired Mario Mandzukic.

Croatia eventually worked longer spells with the ball, as Modric and Brozovic created more consistent passing links with their back line. England’s most effective pressing attacker – Raheem Sterling – was too far away to assist the counter-press, after a change of roles within England’s attacking set-up actually favoured the visitors.

With England pushing more players ahead of the ball in the second half, Croatia could take advantage of the increased spaces during moments of transition. Both England full-backs continued to step higher, with Eric Dier dropping to one side of a back three. From here, England couldn’t adequately block the spaces, with Perisic a repeated threat on the break from the left. Also, with Delph and Barkley much higher, Croatia now had the option of driving forward in the central lane.

The visitors took a surprise lead from a rapid counter-attack. Lovre Kalinic claimed an England cross before Brozovic and Modric worked the ball down Croatia’s right side. Nikola Vlasic’s blindside run got in behind England, and his low cut-back found Andrej Kramaric – who eventually fired Croatia in front with the help of a deflection off Eric Dier. From here, the away team had opportunities on the break to grab a second – but they never managed to create a real clear-cut opening to grab a goal that would have killed England off.

Out of possession, Croatia’s 4-2-3-1 structure formed into a very deep mid-block, with both wingers recovering all the way back to sometimes form a back line of six. From here, Croatia’s double pivot and two central attackers created a square of four to block the central lane and direct play into the wide areas. As the first half progressed, Croatia’s back line moved higher, but still remained in mid-block status. Perisic and Kramaric stopped dropping quite so deep, although Vlasic did start dropping deeper to help his central midfielders in what at times operated as a 4-5-1 defensive structure.

The visitors dropped deeper once more in the second half. This naturally created a more compact defensive unit that England struggled to break down in open play, but also created enhanced spaces to counter-attack into as the hosts were encouraged forward. Despite remaining solid in open play, the Croatian defence failed to deal with a Gomez long throw and then a Chilwell free-kick, conceding twice late on to lose the game and suffer relegation from a Nations League group they were only 15 minutes from winning.