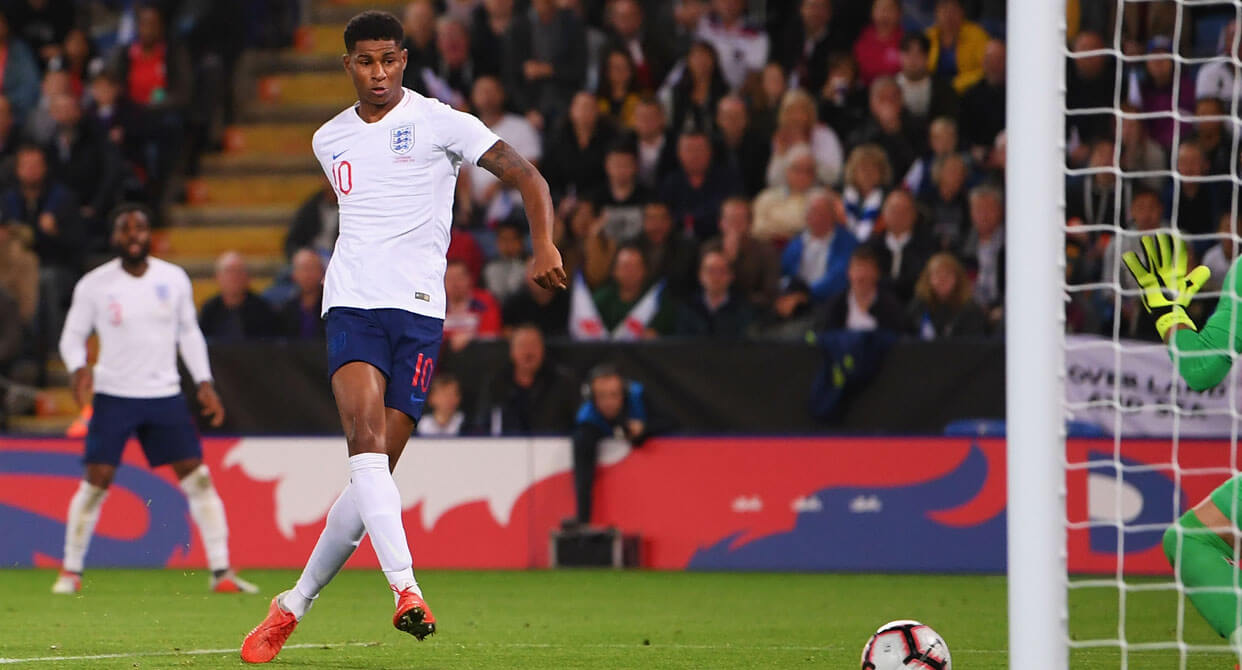 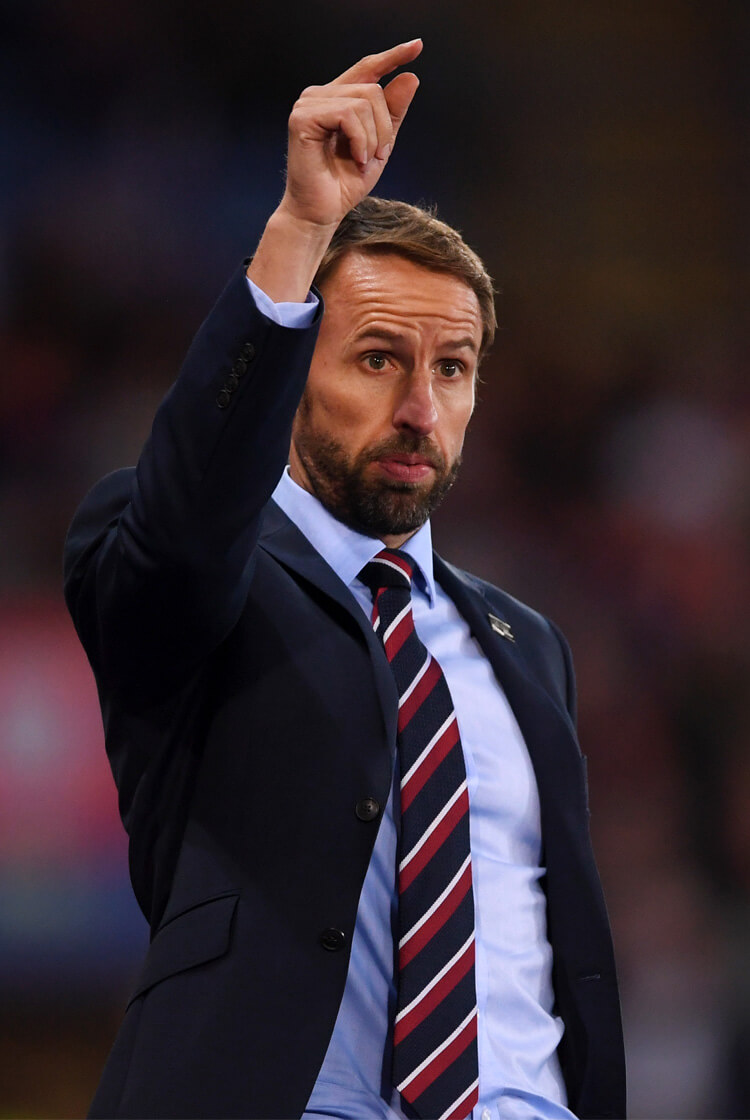 England’s run of three successive defeats came to an end, as Marcus Rashford struck to secure his team a narrow victory over Switzerland in this international friendly at the King Power Stadium. Gareth Southgate made nine changes from the team that went down 2-1 to Spain in the Nations League, and watched as his new-look team struggled to take control of proceedings against disciplined opposition. The hosts were poor in possession throughout the first half, with goalkeeper Jack Butland looking nervous between the posts, but responded with an improved performance after the break, eventually getting their noses ahead through Rashford. The 20-year-old met the cross of Kyle Walker in the 54th minute to score his second goal in as many England games and help his team to a first win since the World Cup quarter final against Sweden. 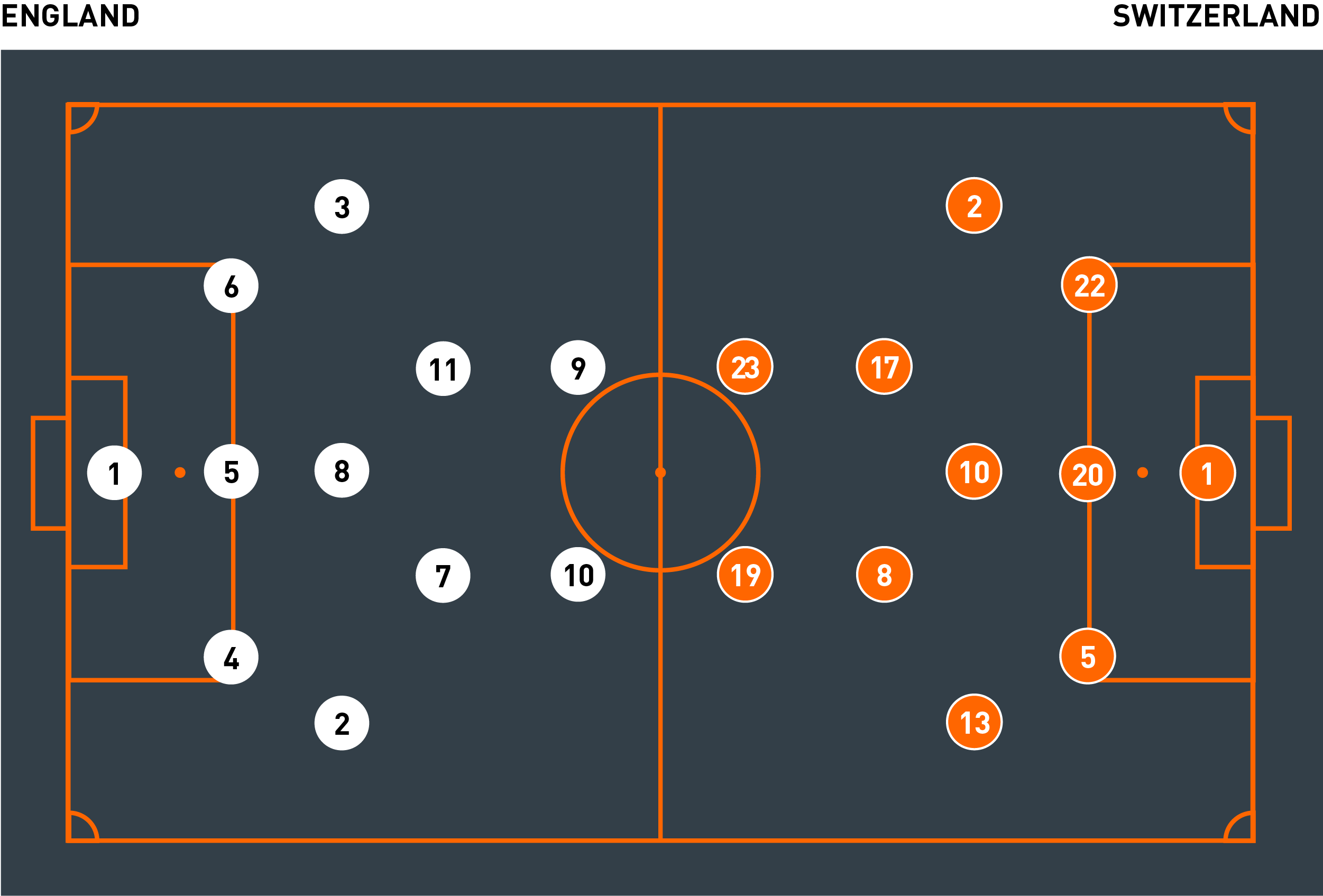 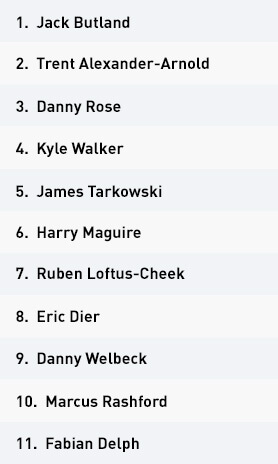 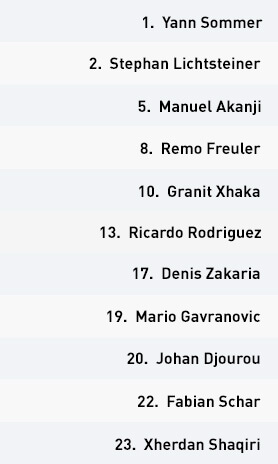 England set up in their familiar 3-1-4-2 shape, again varied by the positioning of full-backs Trent Alexander-Arnold and Danny Rose. Eric Dier played as the central player in front of the back three, while attacking midfielders Ruben Loftus-Cheek and Fabian Delph operated largely within the half spaces. Marcus Rashford and Danny Welbeck led the line, but both regularly dropped in to create the extra man in midfield.

The in-possession strategy was unclear and ultimately unsuccessful over the 90 minutes, as England struggled to create many clear-cut chances. In the build-up phase, the ball-side attacking midfielder would regularly drop deep to help with the penetration of the first two lines – but, as was the case in the defeat to Spain, the angles and body positions taken up here only really allowed for backward passes. This strategy works fine when playing back to a forward-facing player who can break the next line with the pass, but too often this wasn’t the case for England here. A limited number of available options and poor technique in the pass cast serious doubts on the quality of their build.

They displayed a preference for the left side when attacking, with Rose and Harry Maguire often pushing high up the pitch while Delph offered cover – although Delph would join if Maguire didn’t move forward. England’s main threat arose from their work in wide areas, but a combined lack of creativity and end product in the final third led to a frustrating evening all round despite the victory.

Out of possession, Gareth Southgate’s men worked in a 5-3-2, with Alexander-Arnold and Rose tucking in with the back three, while Delph, Dier and Loftus-Cheek would try to remain compact and well-positioned to cover the ground as quickly as possible. Rashford, as against Spain, was tasked with another man-marking job – this time, trying to prevent Granit Xhaka from getting on the ball in the build-up phase.

The 20-year-old was largely effective in his role, but there were several occasions in the latter stages of the first half where he instead joined Welbeck in pressing the back three – this then left a clear passing line through to Xhaka, who was able to get on the ball and turn with ease. Noticing this, Southgate tasked Loftus-Cheek (later Jesse Lingard) with preventing Xhaka from gaining possession in the second half – this freed Rashford up to join Welbeck (later Harry Kane) in the front line, as England looked to increase the aggression of their press.

It was important for the hosts to return to winnings ways after consecutive losses to Croatia, Belgium and most recently Spain, but it was an unconvincing display that will raise concerns about the depth of the squad. Southgate will have been impressed by the performances of some of his players – Rose, Alexander-Arnold and Rashford – but few genuinely staked their claim to a future place in the head coach’s preferred starting XI.

Switzerland tried to match England by operating with three at the back. The formation was essentially a 3-5-2, but their shape often took the form of a 3-4-3, as Xherdan Shaqiri dropped from his starting position in the front two and wing-backs Stephan Lichtsteiner and Ricardo Rodriguez pushed high. Granit Xhaka, Remo Freuler and Denis Zakaria formed the midfield three, ahead of the defensive trio of Fabian Schar, Johan Djourou and Manuel Akanji.

The visitors’ in-possession objective was simple: get Xhaka and Shaqiri on the ball as quickly and as much as possible. While Xhaka initially found it difficult to receive the ball against the man-marking of Marcus Rashford, Shaqiri would often drop from the highest point and receive from his centre-backs. With Shaqiri dropping, Lichtsteiner and Rodriguez could effectively play as wingers and Mario Gavranovic could threaten in behind and stretch the play – a strategy that almost led to a first-half goal.

For all their control and possession within the opening period, Switzerland lacked potency and a real goal threat. The majority of their passes were horizontal across the midfield line, and there was limited movement in behind and between their opponents’ defensive lines. They looked more threatening when Djourou drove out with the ball, committing an England player towards him before moving play on to a free man. Schar also occasionally overlapped Zakaria to take advantage of the space wide of England’s midfield three, which couldn’t be covered by wing-backs wary of the threat posed by Lichtsteiner and Rodriguez.

Out of possession, Switzerland looked to press England’s goal-kicks aggressively but would otherwise often fall into a compact 5-3-2 mid-block. While they were content to show their opponents out wide, they remained extremely compact in the middle, making it very difficult for England to create chances centrally and nullifying the threat of Danny Welbeck (and later Harry Kane) in and around the box.

Switzerland’s discipline and compactness were key factors in limiting England’s progress within the final third, as much as their opponents’ own shortcomings. It was only through the second phase of a corner that they were finally caught out – otherwise, even the threats England posed out wide were dealt with by an organised defence.