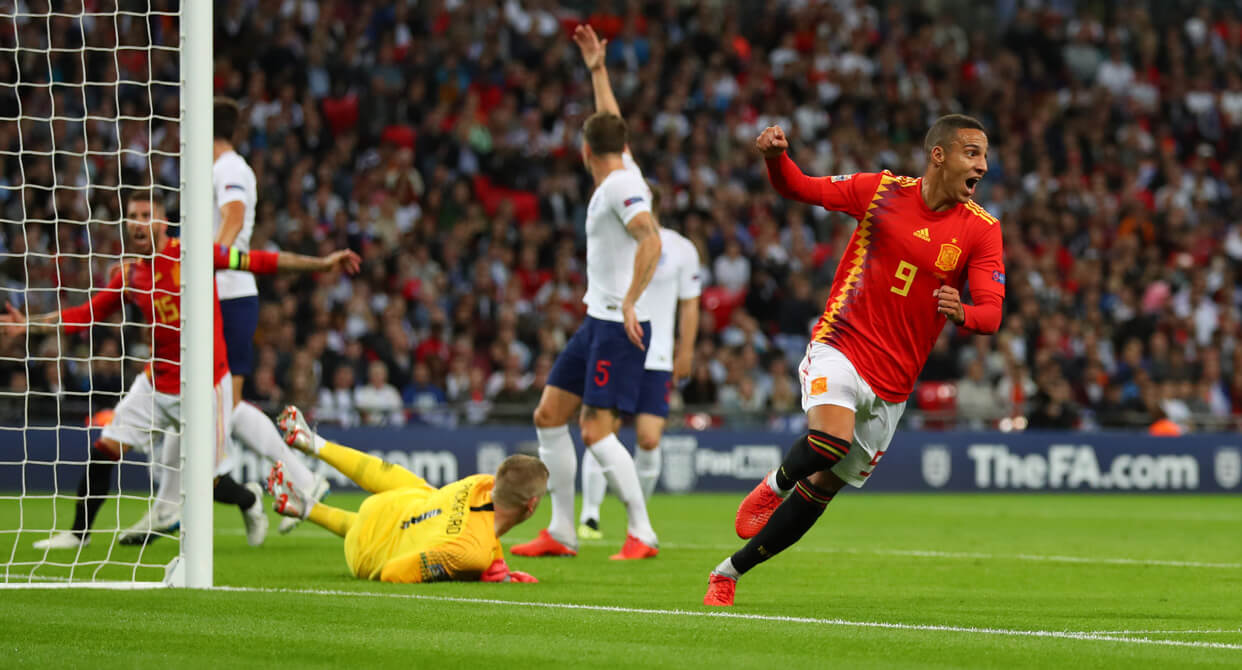 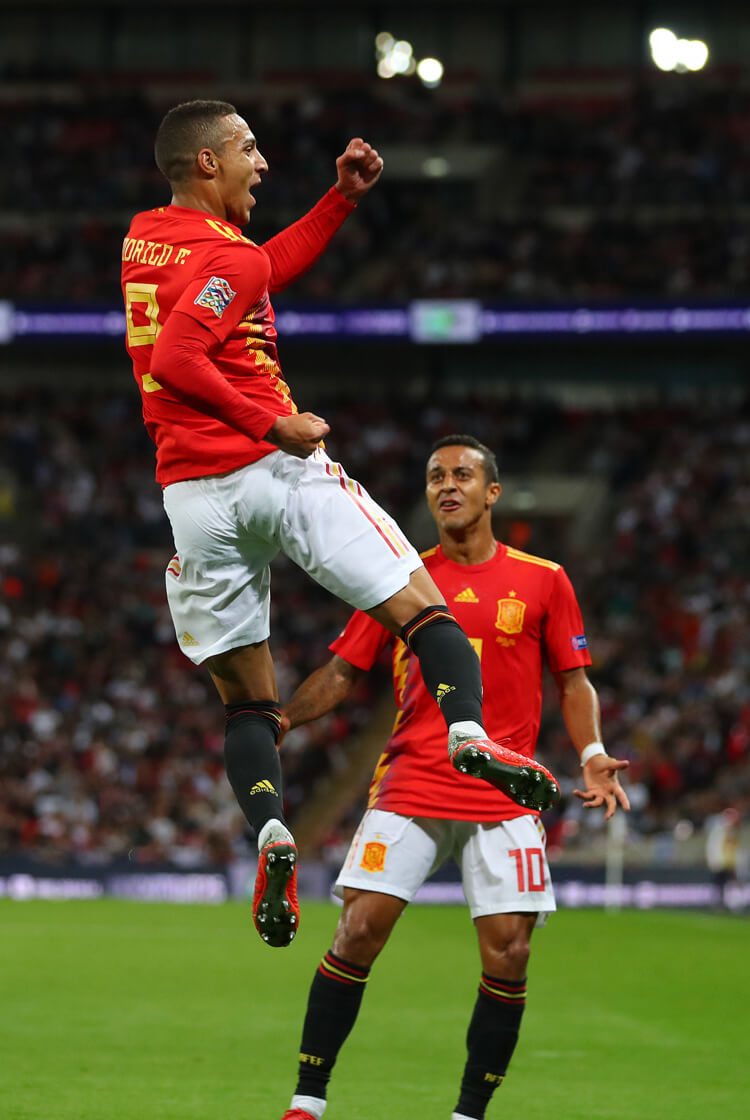 England kicked off their UEFA Nations League campaign with this narrow defeat to Spain, as Gareth Southgate and his troops were served something of a reality check following their run to the semi finals of the 2018 World Cup. Marcus Rashford got the hosts off to a perfect start by meeting the delightful pass of Manchester United teammate Luke Shaw to open the scoring in the 11th minute, but La Roja almost instantly hit back through Atletico Madrid midfielder Saul Niguez. More poor marking, this time from a free-kick, allowed Valencia forward Rodrigo in to score what would prove to be the winner in the 32nd minute. It’s a welcome post-World Cup boost for Spain, with new head coach Luis Enrique looking to a future without the likes of retired legends Gerard Pique, David Silva and Andres Iniesta. 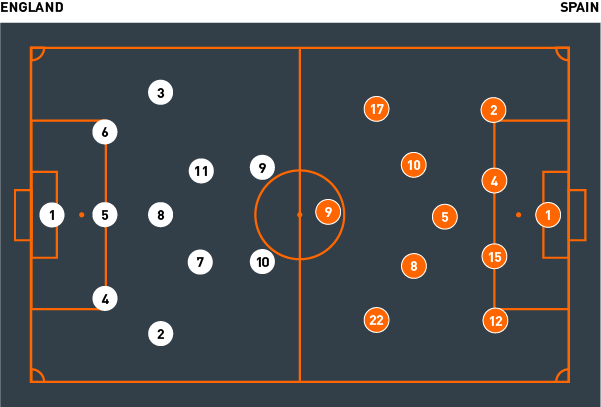 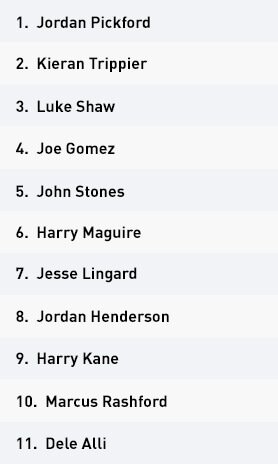 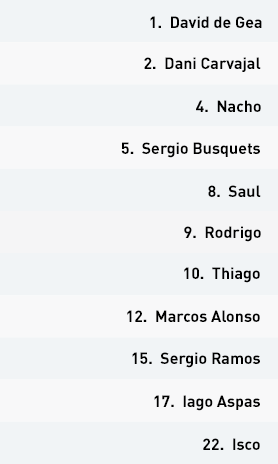 England set up in their variation of a 3-1-4-2 formation, with the variation generally coming in the positioning of the wing-backs. Joe Gomez, John Stones and Harry Maguire formed the back three, with Jordan Henderson ahead of them in midfield. Marcus Rashford partnered Harry Kane in attack, with Jesse Lingard and Dele Alli providing the playmaking support.

Gareth Southgate’s players struggled to break Spain down in possession in the first half, with Henderson in particular running into difficulty. The Liverpool captain would position himself between the first and second lines of Spain’s block, but could only really receive facing his own goal, resulting in the ball being recycled to the back three. England’s most effective way of bringing the ball out in the opening period was through Maguire driving forward and committing opposition players towards him – this then created space elsewhere.

England’s purpose in possession was to breach Spain’s back line and meet the forward runs of Rashford, Kane, Lingard and Alli. This was exactly how the opening goal of the game came about on 11 minutes, as Shaw collected the ball before threading a sublime pass through for Rashford to finish. This was as good as it got for the hosts, however – despite showing they could threaten the visitors’ back line, poor execution and timing of movement limited their threat for the rest of the game, as they struggled to create many clear-cut chances. A late Rashford chance parried by David de Gea, and Danny Welbeck’s even later disallowed goal, was as close as England came to securing a draw.

Out of possession, they mixed between pressing Spain aggressively and forming a mid-block. The intention here was to prevent Spain’s deep-lying playmaker Sergio Busquets from getting on the ball and dictating play. Rashford was tasked with man-marking the Barcelona midfielder during the build-up phases, which resulted in their shape taking the form of a back five and a central midfield diamond of Henderson, Alli, Lingard and Rashford.

When the ball was delivered wide to full-backs Marcos Alonso and Dani Carvajal, or wide attackers Isco and Iago Aspas, the player at the side of the diamond (Alli or Lingard) would release himself to close down the wide man and prevent him from playing inside. The near-side full-back (Kieran Trippier or Shaw) would release himself from the back line to prevent any forward play, while the near-side centre-back would assume responsibility for the attacking midfielder inside.

This strategy was reasonably effective but could be undone if the full-back closed down too quickly – as Shaw did in the build-up to Spain’s equaliser – or if the near-side centre-back failed to deal with the penetrative run from the attacking midfielder. Gomez, starting ahead of Kyle Walker on the right of Southgate’s back three, was caught out by such runs from Saul on several occasions.

Spain set up in a 4-3-3 formation, with Sergio Busquets, Thiago and Saul Niguez forming the midfield triangle, and Iago Aspas, Rodrigo and Isco shaping the attack. The front three could often be found exploiting the half-spaces and central areas, as full-backs Marcos Alonso and Dani Carvajal looked to surge forward and provide the width. The attacking runs of Saul in particular were a real threat throughout the game, as he tried to take advantage of the space between England’s centre-backs and full-backs.

La Roja struggled to build from the back early on, as a result of Marcus Rashford’s man-marking job on Busquets – but they eventually found a way through. Thiago became the extra man by dropping in from a higher position, and neither Dele Alli nor Jesse Lingard could track his movement as they had to be in position to affect Nacho and Sergio Ramos, should they receive the ball. Jordan Henderson was similarly unwilling to follow an opponent so far from his position.

This numerical superiority allowed a cleaner build and was a key difference between the two teams in building possession from the back. Spain were significantly more adept at identifying how and when to use an extra man in the build-up, compared to their opponents.

Spain remained in a 4-3-3 shape out of possession but, when they were not pressing high, they could also be found in a 4-1-4-1 structure. Their intention was to keep England operating in central areas and nullify the threat posed by wing-backs Kieran Trippier and Luke Shaw. To achieve this, Saul and Isco would shut down Joe Gomez, forcing the play back inside and preventing an easy pass out to Trippier. Rodrigo would remain central, putting limited pressure on John Stones while screening the ball into Henderson. Aspas would generally move to shut down Harry Maguire, while Thiago took on more of a screening role into England’s attacking midfielders. He could also shut Henderson down from behind, should the England pivot receive possession beyond Rodrigo.

The primary concern of Luis Enrique’s players was the ball in behind – and, beyond Marcus Rashford’s goal, they dealt with this relatively well. England’s runners were frequently caught offside, with Spain only sporadically beaten by balls into the half-spaces in behind – but they were generally able to get across and deal with these fairly comfortably as they held on for a first Nations League victory.