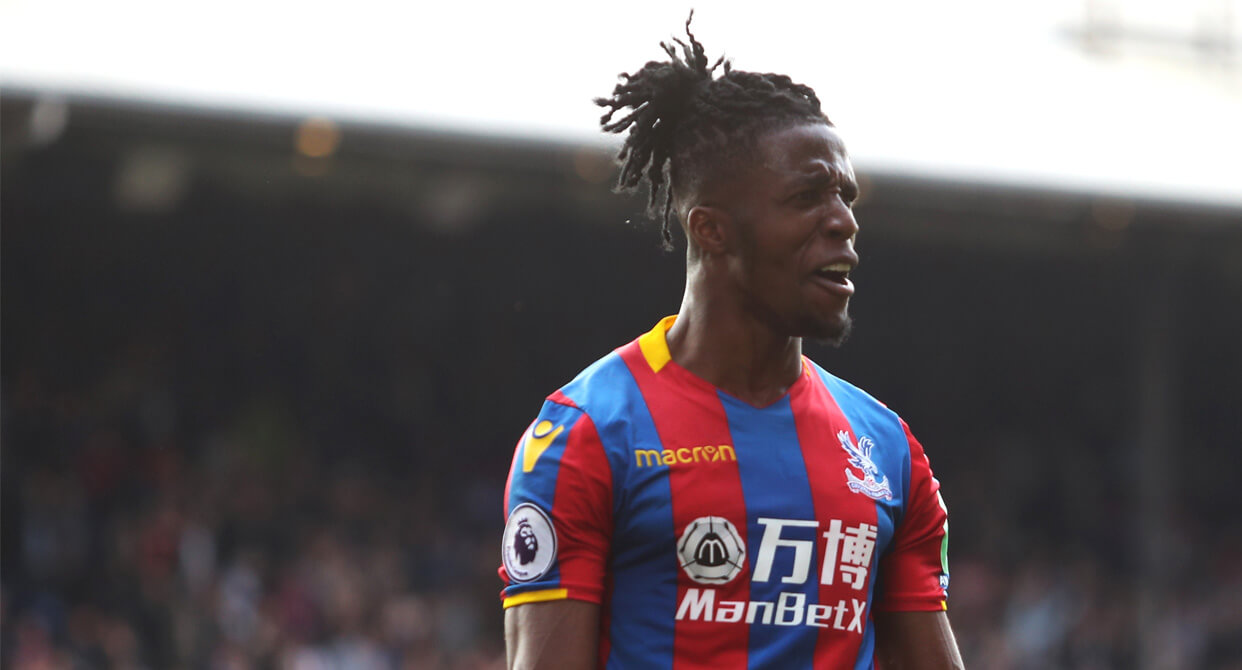 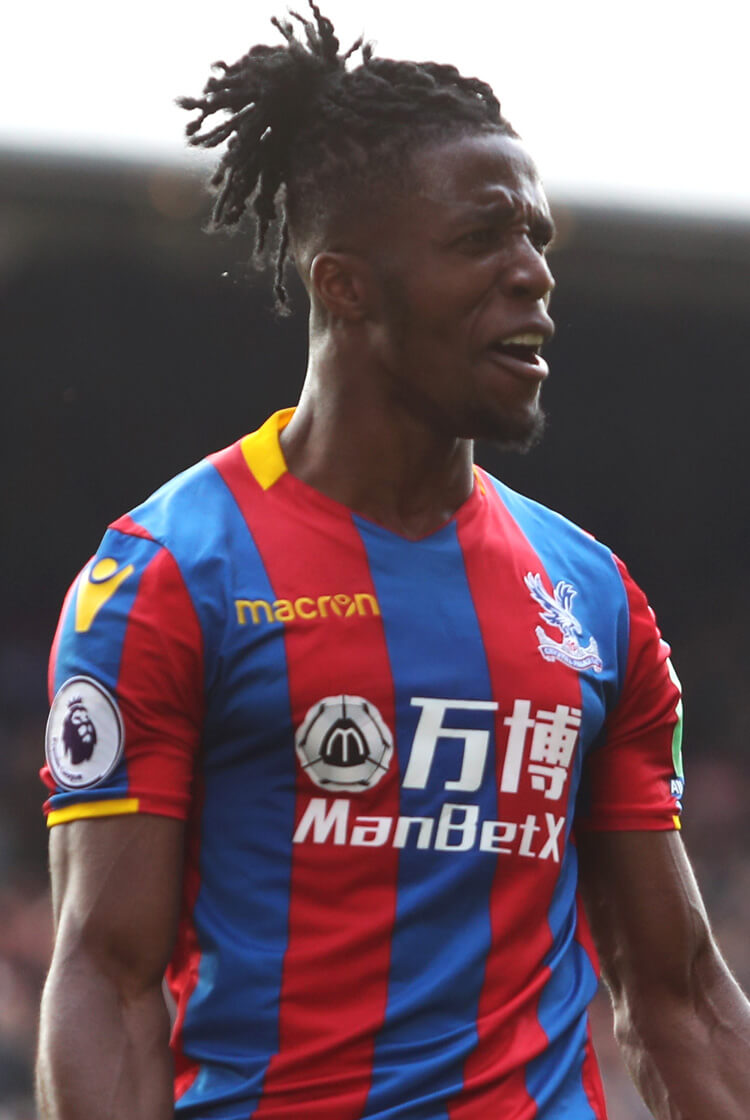 Crystal Palace moved six points clear of the Premier League drop zone after coming out on top in this five-goal thriller with local rivals Brighton. A frenetic first half at Selhurst Park saw Roy Hodgson's team lead through Wilfried Zaha after just five minutes. James Tomkins doubled the home lead soon after, before Glenn Murray got one back for Chris Hughton's visitors. Zaha's second restored the two-goal cushion before Jose Izquierdo struck back once more – but that also marked the end of the scoring, with the Eagles holding on for a vital three points. 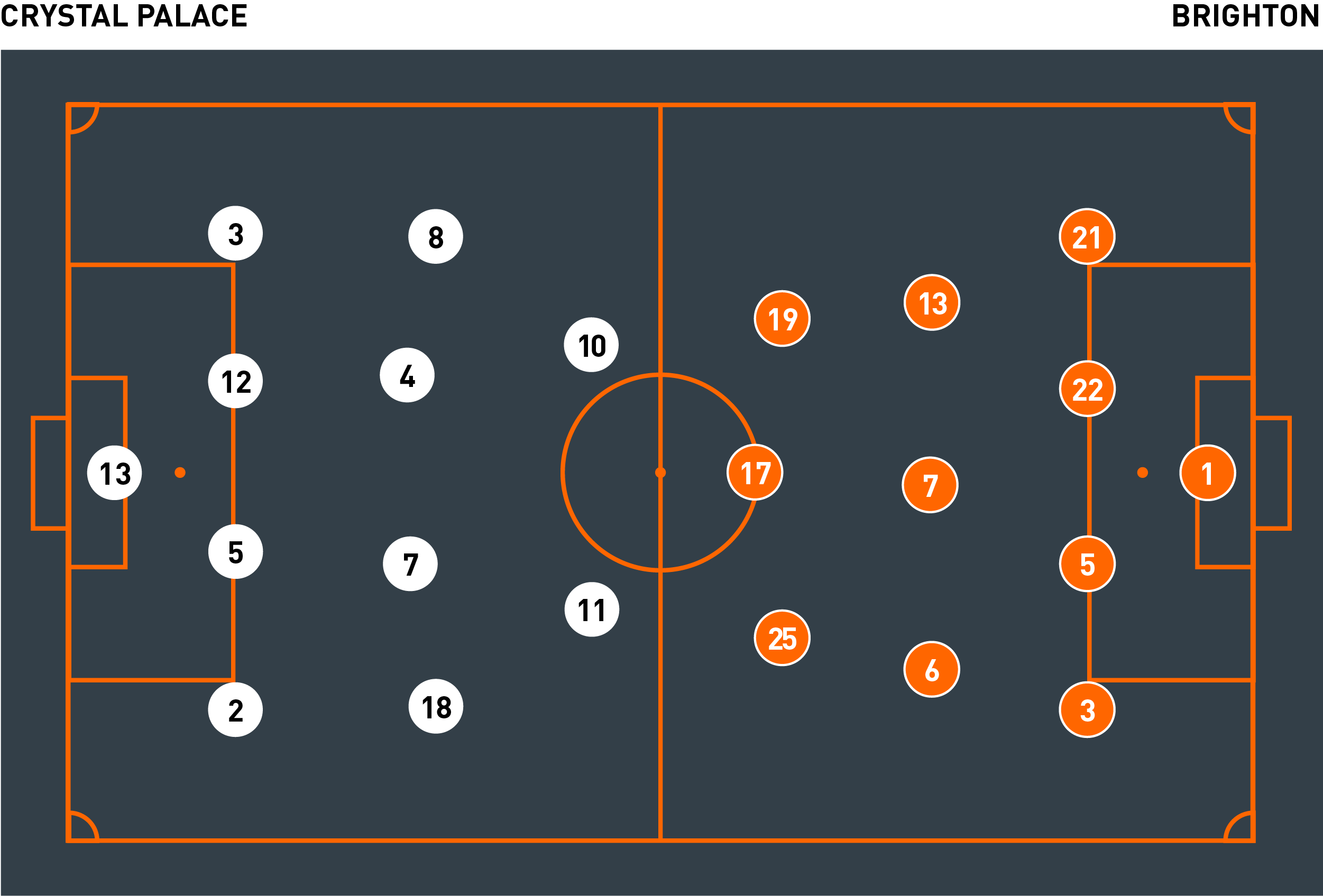 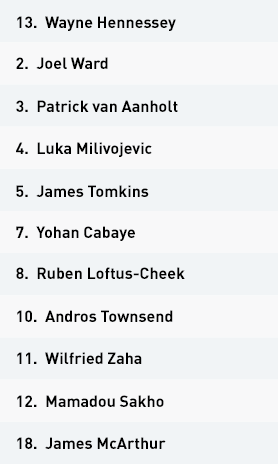 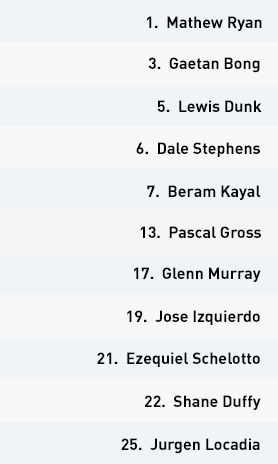 Crystal Palace set up in a 4-4-2 system. Wilfried Zaha and Andros Townsend started up top, but notably they didn’t function as typical centre forwards, instead drifting wide to create overloads offensively. When defending, the attacking pair returned to more central positions.

Palace started with high intensity and were eager to take control of the game by displaying their attacking intent early on. This aggression paid dividends after just five minutes, with Zaha scoring from a set-piece that was poorly defended by Brighton.

After conceding, the fluidity of Palace’s attack quickly started to cause problems for Brighton. Yohan Cabaye and Luka Milivojevic dropped deep, and Cabaye was key in the pivot role, frequently switching play and controlling the tempo. Full-backs Joel Ward and Patrick van Aanholt were forward-thinking and provided the width in attack, which afforded Ruben Loftus-Cheek and James McArthur the freedom to move in centrally to create overloads. Zaha, meanwhile, was utilised in a false nine role – his drifting wide became increasingly difficult for Brighton’s central defenders to pick up.

Brighton were left unbalanced in attempting to deal with these overloads. The continued early pressure resulted in several set-pieces for Palace – this again brought success for the home team, with James Tomkins capitalising on ball-watching from the visiting defence to score the home side's second.

Palace failed to maintain their two-goal lead, with Glenn Murray pulling one back for Brighton, but the hosts did well to re-establish the initiative and were soon back among the goals. Zaha’s run into the box from a wide-left position again wasn’t picked up, and he met the ball over the top by Milivojevic with a strong header.

Palace naturally became more conservative in their attacking play in the second half. Often only one full-back would break forward, with the other providing cover to prevent any potential counter-attacks. They created fewer chances as a result, but when they did attack they effectively nullified the threat from Brighton on the break.

Christian Benteke was brought on after 70 minutes to offer Palace a more physical presence up top and relieve the pressure. For the final quarter of the game, Roy Hodgson switched his side to a 4-1-4-1 to combat Brighton’s direct play and close out the game. Zaha dropped in to left wing, leaving Benteke as the lone striker. This switch invited Brighton to attack, but they held on for the three points.

Brighton set up in a 4-3-3 system. Beram Kayal operated as the deep-lying midfielder in possession, looking to create opportunities for attacking trio Jose Izquierdo, Glenn Murray and Jurgen Locadia. Defensively, the Seagulls moved into a 4-1-4-1 system.

Brighton struggled to cope with Palace’s early attacking intensity. The movement of Palace’s wingers was a notable problem for Brighton. When Yohan Cabaye and Luka Milivojevic picked up the ball for the home side, one of Brighton’s midfielders would step out of position to press, thus leaving half-space for Palace’s wingers to exploit. If Brighton were successful in pressing, Palace would switch the play and create overloads with Wilfried Zaha drifting wide. Zaha and Andros Townsend offered a significant threat to Brighton’s back line, particularly when they isolated the full-backs in one-on-one situations.

Despite disappointingly conceding to two set-pieces and consequently handing the momentum to their opponents, Brighton weren’t without their threat. They posed problems to Palace in quick counter transitions, as they often switched the play in an attempt to exploit Palace’s attack-minded full-backs. This tactic paid off when Izquierdo exploited the space behind Joel Ward after a swift counter-attack for the away side’s second goal.

When Brighton did establish attacks, however, their three midfielders often dropped together, in front of the Palace midfielders. This allowed Palace’s back four and midfield four to get good numbers behind the ball while also maintaining their options ahead. As a result, Brighton struggled to create meaningful opportunities when Palace became structured and organised in their defensive 4-4-2 shape.

In the second half, as Palace dropped lower, Brighton established possession and brought on Anthony Knockaert to offer creativity in the attacking play. The full-backs became more forward-thinking as a result, and moved in to good crossing opportunities. Palace defenders Mamadou Sakho and James Tomkins dealt well with this threat, however, which led to Brighton manager Chris Hughton changing his system to a 4-4-2 and bringing on Leonardo Ulloa.

Ulloa replaced Pascal Gross to offer a greater threat from crosses into the box. The physicality and aerial ability of Ulloa complemented Glenn Murray and allowed Brighton to be more direct in their attacking approach. Palace consequently dropped Milivojevic in to screen Ulloa and Murray, and pick up any second balls. This switch nearly paid off with Murray’s late chance, but Brighton couldn't get the equaliser and thus were unable to recover from their poor start.

With Crystal Palace manager Roy Hodgson setting his team up to come out and take aggressive, attacking initiative, Brighton struggled defensively early on. Notably, the attacking intent of the Palace full-backs combined with the freedom of their two forwards created overloads that Brighton weren't comfortable defending.

Wilfried Zaha and Andros Townsend were given the licence to drift wide. Palace subsequently created a number of opportunities and took full advantage of the set-pieces they had won.

With their attacking set-up, Palace naturally had problems in the defensive transition and were caught on the counter-attack a number of times in the first half. One of these transitions resulted in Jose Izquierdo’s goal for Brighton.

Both teams adapted tactically in the second half. Palace lessened their aggression in attack, crucially reducing the role of their full-backs. Only one would go forward to restrict Brighton's ability to attack on the counter. When Palace's wingers moved to occupy the half-space, however, they did lose width in attack.

Brighton introduced Leonardo Ulloa to provide a more physical presence in the box and switched to a 4-4-2 to become more direct in the closing stages of the game. In response, Roy Hodgson brought in a third midfielder, Luka Milivojevic, to sit in front of the back four in a 4-1-4-1 system. Hodgson’s adjustments, despite the late pressure his team had to contend with, kept the game tighter and ultimately helped Palace close out the game.