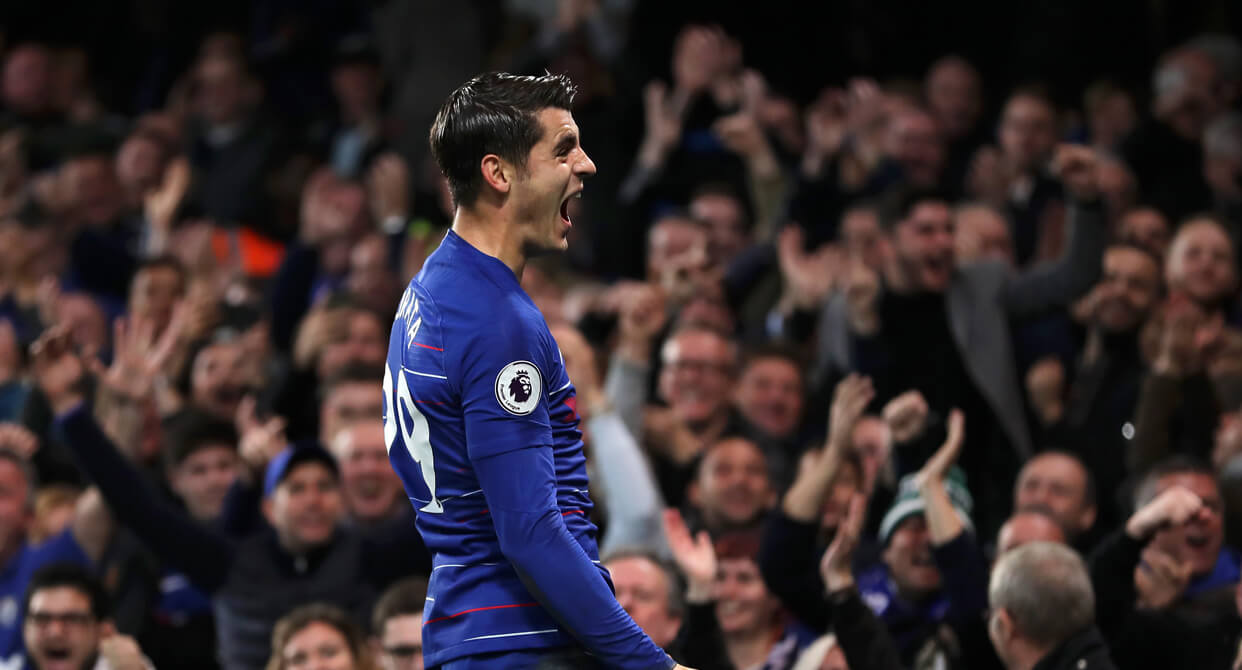 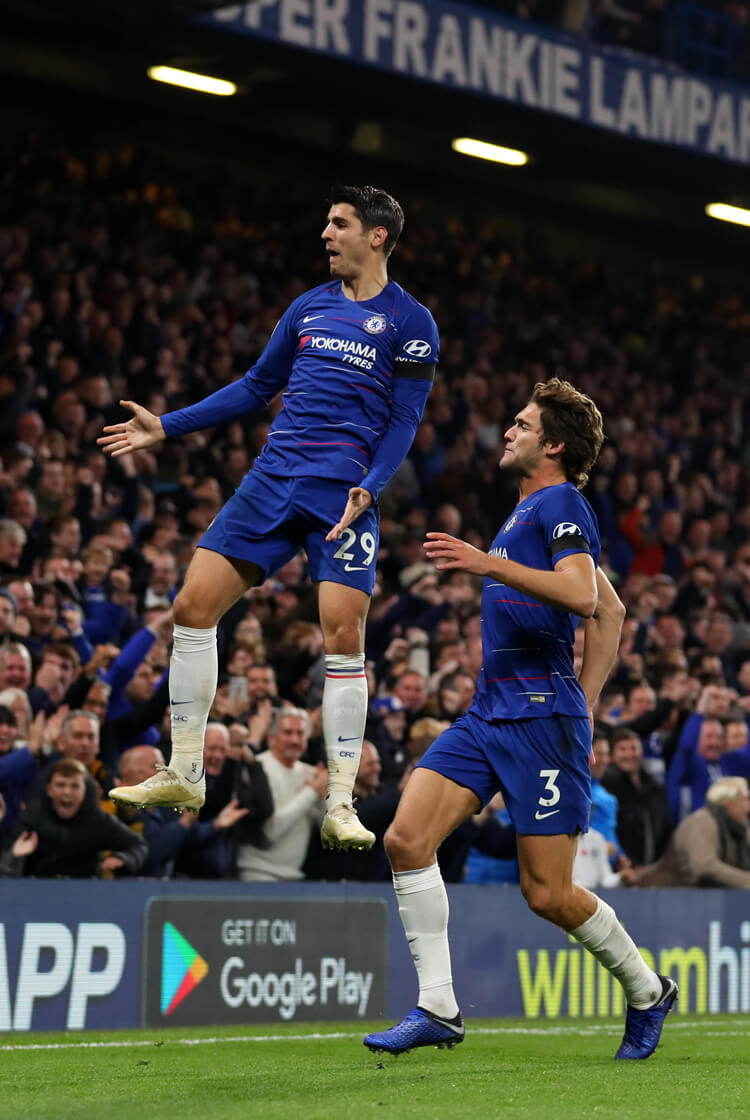 Alvaro Morata scored twice and Pedro once as Chelsea eased to victory over Crystal Palace at Stamford Bridge to keep the pressure on league leaders Manchester City. Palace proved frustrating opposition in the first half, but the hosts ramped up the pressure and eventually broke the deadlock through Morata in the 32nd minute. Andros Townsend equalised soon after the restart, however, and Maurizio Sarri had to turn to his bench to inspire his side to victory. The introductions of Mateo Kovacic and Eden Hazard proved decisive, with the latter quickly setting Morata up for his second of the game from a free-kick into the box. Moments later, Pedro met the low cross of Marcos Alonso to confirm the three points. 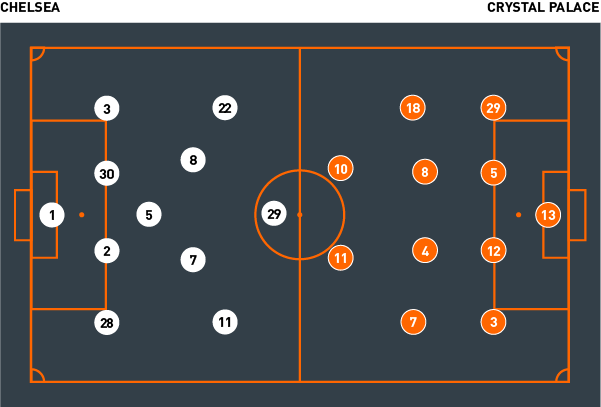 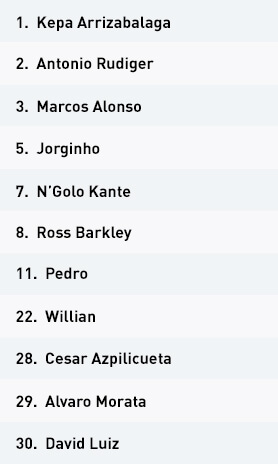 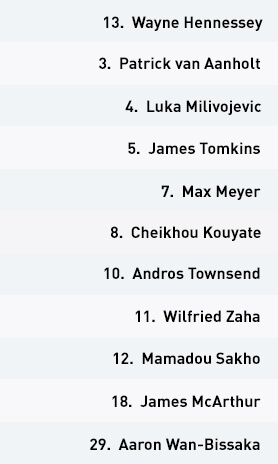 Chelsea continued in their familiar 4-3-3 structure in possession, and dominated the early play. Marcos Alonso moved high from left-back, while Cesar Azpilicueta was more reserved on the opposite side. Pedro provided the attacking width on the right, pinning left-back Patrick van Aanholt – who can be very effective on the transition – as deep as possible.

Ross Barkley would fill in as the false full-back on the left, providing cover and stability for Alonso’s runs forward. However, the midfielder would remain much deeper than normal when the ball was on the right side, forming a double pivot with Jorginho – this meant that Chelsea had minimal presence between the Crystal Palace midfield and defensive lines. N’Golo Kante was often the only player behind Palace’s midfield unit, but his combinations on the right were lacking in attacking quality.

Chelsea’s wide structure around Palace’s compact 4-4-2 block enabled penetration around the sides, but they then lacked numbers inside the penalty area. Lone striker Alvaro Morata was found attacking crosses alone against the entire back line, with both Willian and Pedro still positioned wide.

Growing frustrated with a lack of progress, Azpilicueta started to move higher – despite creating more space for Palace to hit on the break, this pushed both Pedro and Willian inside, who could then draw a man out of the back line. This allowed Morata to attack the Palace defence one on one, and the Spaniard went on to open the scoring from a cutback cross from Pedro. An increased attacking presence in the central lane turned the game firmly in the Blues’ favour.

The half-time whistle interrupted their best spell of attacking rhythm, as both Kante and Barkley had dropped in front of Palace’s narrow midfield, joining Jorginho in a seemingly ineffective position. However, when one of Palace’s midfielders stepped forward to press, deft balls around the corner would penetrate the midfield block and find the central front line with increased space to attack.

Chelsea failed to maintain that tempo in the second half – at least not until Palace grabbed a surprise equaliser. Azpilicueta again moved higher from right-back, and with Willian and Pedro also out wide, the horizontal stretching of Palace’s midfield unit created gaps for the hosts to pass through. Once more, though, this left only Morata between the lines. The central midfield trio of Kante, Jorginho and Barkley, although comfortable in possession, offered little in terms of penetrating a now compact block.

Eden Hazard and Mateo Kovacic were eventually introduced, and the hosts immediately restored their lead. A deep free-kick from Hazard found Morata, who hit a low drive back across goal and into the far corner. With Hazard now a constant presence between Palace’s lines, the victory was soon confirmed. Alonso stepped higher from left-back, with Jorginho and Kovacic covering potential counter-attacks. Kante’s positioning on the right side allowed Pedro to make runs in behind, and the Spaniard duly tapped home from Alonso’s low cross.

With Chelsea dominating the majority of the play in the first half, their defensive contributions were focused on the transition rather than being out of possession for a prolonged spell. Aggressive and man-focused counter-pressing forced Palace into early passes forward or passes all the way back to goalkeeper Wayne Hennessey – when the ball would go long anyway, with Chelsea pressing high.

David Luiz and Antonio Rudiger won almost every battle for the long ball against Wilfried Zaha and Andros Townsend, resulting in consistent regains of possession. In the briefest of moments when Palace avoided Chelsea’s initial press, the hosts would set up in a 4-1-4-1 mid-block – but rarely was this required.

Palace’s splitting passes did bypass Chelsea’s second-half press, as Zaha’s movements away from the central lane provided the perfect passing option around central pressers. As the Blues began to block off these diagonal passes, they left space in the central lane and were duly punished by a quick combination and low shot from Townsend.

While their dominance of the ball quickly returned, they were then exposed on their right side, as the space in behind the advanced Azpilicueta was repeatedly targeted. Sarri’s tactical change to keep Kante fixed on the right side halted any progress, and Chelsea soon restored their lead before confirming the three points with a third goal.

Chelsea’s aggressive man-oriented counter-press forced Crystal Palace, who set up in a 4-4-2, to hit early passes forward – particularly as their back line were uncomfortable in possession when facing heavy pressure. They targeted these balls over their opponents’ full-backs, especially during transitional moments, as Chelsea always pushed at least one of Marcos Alonso or Cesar Azpilicueta forward. Despite launching a number of first-half counter-attacks from deep, they lacked numbers forward – no more than one player from deep would step up to support forwards Wilfried Zaha and Andros Townsend at any one time.

To his credit, Zaha drew multiple fouls in the attacking half on the break, as the hosts’ midfield tried to recover back and regain possession. This gave the away side a chance to attack from set-piece situations, sending forward their aggressive and powerful central defenders. Deliveries into the penalty area were testing, but little of real note materialised in the opening period.

Palace were much braver in possession in the second half; rather than clearing the ball forward, they looked to hit the feet of Townsend or Zaha, with the latter now drifting extremely wide. As Chelsea continued to aggressively press forward after losing possession, this diagonal movement from Zaha created a passing lane forward and presented the back line with an opportunity to split Chelsea’s midfield unit. It also created more space in the central lane for Townsend to combine with midfield runners. A simple one-two combination with James McArthur released Townsend, who struck low into the corner to grab an equaliser.

With Azpilicueta stepping higher once more, left-sided counter-attacks proved an effective method of progression. The Zaha-Townsend-Patrick van Aanholt combination was momentarily fruitful in penetrating the space on the Chelsea right. These attacks soon dwindled, though, as N’Golo Kante became fixed to the right side and Azpilicueta moved deeper to nullify any threat on the counter.

A deep 4-4-2 mid-block ensured Palace had complete central protection in their own half. The midfield four remained extremely narrow – perhaps an expected tactic, given right midfielder James McArthur is regularly deployed in the middle. This tight midfield unit ensured any potential overload in central midfield couldn’t be exploited, as they encouraged their opponents to play in wide areas.

Success for Palace was in pulling Chelsea’s full-backs high and wide, leaving space around the sides of the central defence for Zaha and Townsend to attack. By remaining narrow, they also encouraged crosses from the home side – they were more than comfortable with dealing with lone striker Alvaro Morata in the air.

As the hosts grew impatient with their progress and pushed extra numbers into the penalty area, the overload on Morata reduced. Palace’s back line went from a central four-on-one to a four-on-three, with Pedro and Willian now moving inside to help draw defenders away from Morata – this set-up led to the opening goal of the game.

After grabbing a surprise equaliser, Palace reinstated their deep mid-block. Over time, this converted into a complete low-block, as they simply looked to hold on for a point. The visitors will have been extremely disappointed to concede a second goal from a set-piece, as this was one area in which Palace should have been dominant. In restoring their lead, Chelsea stepped up their attacking play, with their left-sided attacks ultimately proving too much for the visitors.