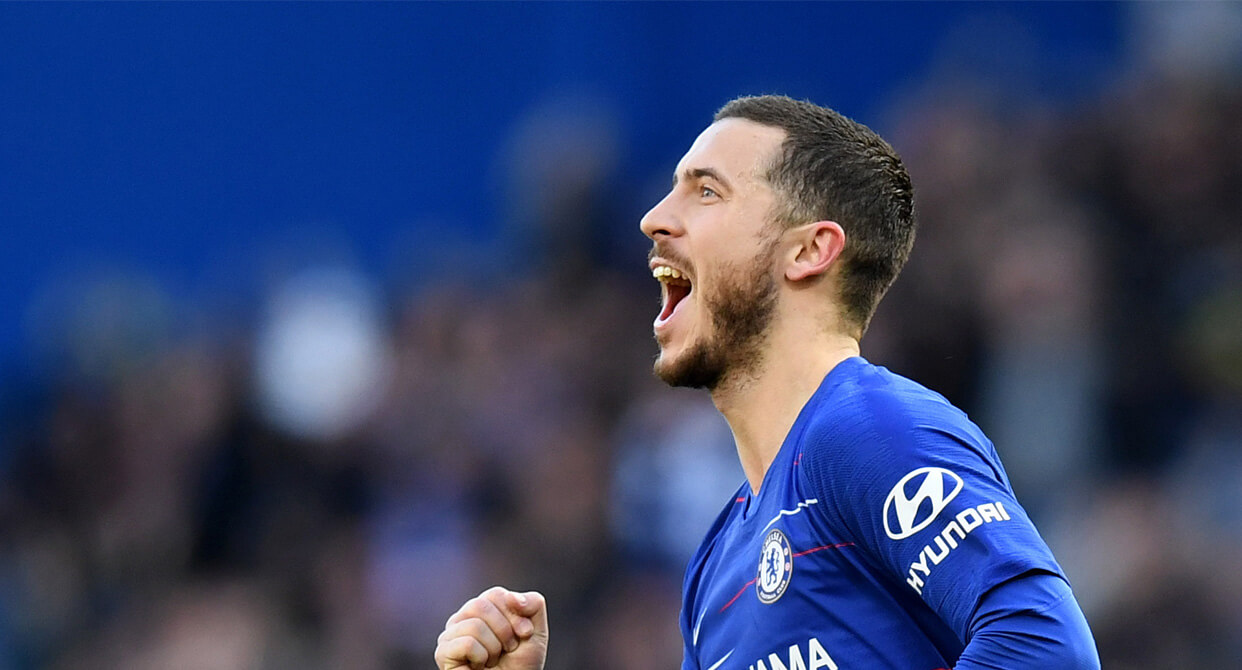 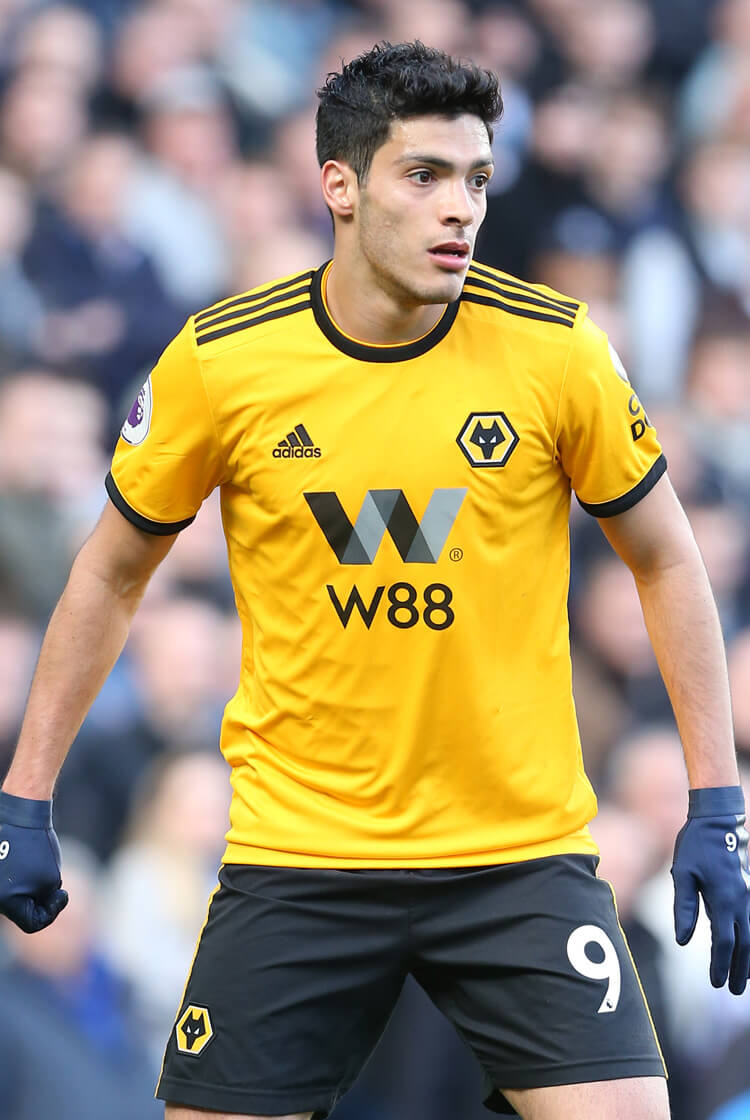 Maurizio Sarri described Chelsea's draw against Wolves as a "missed opportunity," and looking at the possession statistics, it's not hard to see why the Italian left Stamford Bridge a frustrated man. But in reality, Chelsea found it hard to create chances against an extremely well-organised Wolves side. After a first half of few chances for either side, it was Nuno Espirito Santo's side that broke the deadlock, 11 minutes into the second half when Raul Jimenez finished off a counter-attacking move with a shot that found its way into the net via a deflection off Cesar Azpilicueta

A late change of system from Sarri saw Chelsea switch to a 4-2-3-1, with Willian, Ruben Loftus-Cheek and Callum Hudson-Odoi all on the pitch in place of Jorginho, Mateo Kovacic and Pedro respectively. But it wasn't until the final moments of the game that the home side got the equaliser that seemed like it might never come, when the ball fell to Hazard just outside the area and the Belgian's deceptively powerful shot finally got the better of Rui Patricio. 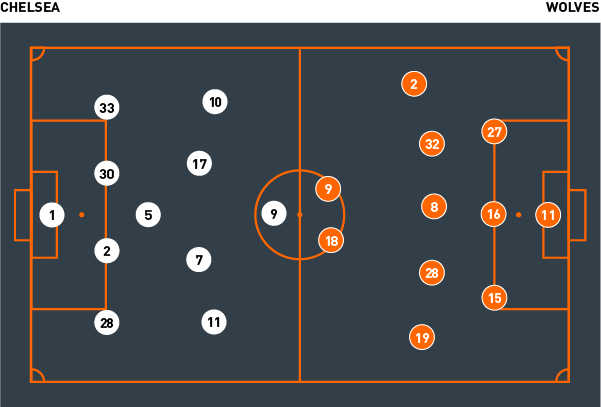 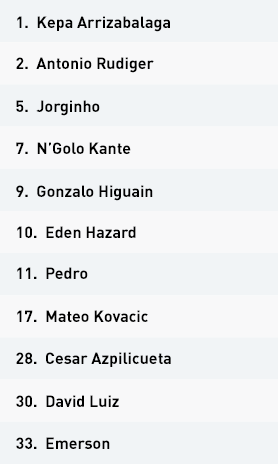 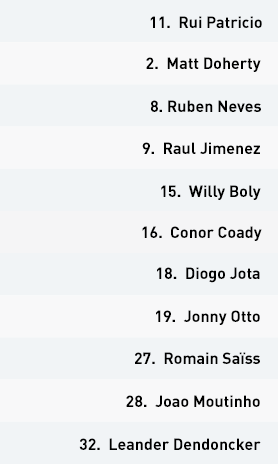 Chelsea set up in a 4-1-4-1 formation with Jorginho between the defence and midfield, Eden Hazard, Mateo Kovacic, N'Golo Kante and Pedro forming the line of four behind Gonzalo Higuain who led the attack. Chelsea completely dominated the ball and had to try and break down an extremely well-organised Wolves block.

To try and create gaps between and around the Wolves players, Chelsea had to regularly circulate the ball between their back four. When Chelsea managed to entice Leander Dendoncker, Joao Moutinho or Ruben Neves in the Wolves midfield to press centrally, they had more success at moving the ball into advanced areas. One of the ways this was achieved was by finding Jorginho’s feet between Diogo Jota and Raul Jimenez, with the playmaker in a position to turn and feed one of the four attacking midfielders ahead of him. The key here was that one of the Wolves midfield three would move out to close him down which forced the rest of the midfield unit to compact and increase the space on the outside of them for Kante or Kovacic to receive.

The other way in which Chelsea tried to achieve this was by dropping their attacking midfielders in front of the Wolves midfield unit in order to yield the same result: compacting the midfield and increasing the space outside of them for a switch. While this provided better progression up the field, Chelsea still had the line of five Wolves defenders to contend with, who would be very deep thus limiting the space in behind for penetrative runs and passes.

This limited Chelsea to shots from distance and crosses into the box. The Wolves defensive line were adept at rushing out to block any potential shots – Willy Boly in particular found himself in the way of a number of Chelsea attempts and the central defensive trio were comfortable dealing with the crosses that came in as well. It's unsurprising then, that Chelsea’s goal came from a short corner where the Wolves defence were even deeper than usual and struggled to get out to Hazard as they had done in the general out of possession phases. Chelsea looked somewhat bereft of ideas throughout the game in terms of breaking through the Wolves block.

Out of possession, Chelsea looked to either press Wolves high up the pitch or drop into a 4-5-1 mid-block with Pedro and Hazard tucking in either side of Kante, Jorginho and Kovacic to form the midfield line. Chelsea would utilise the mid-block strategy in order to try and balance out any potential overload that Wolves may have by pushing their wing-backs forward as they often do.

Chelsea would form the mid-block if Wolves had broken out of the initial press and had achieved secure possession or if the initial press wasn’t on. When Chelsea did press, Higuain would close down Conor Coady, Hazard would press Romain Saiss and Pedro would press Boly. Cesar Azpilicueta and Emerson were responsible for closing down Matt Doherty and Jonny. As the ball travelled out to one side and the full-back pressed, Kante and Kovacic would move across to affect the two nearest Wolves central midfielders while the far side Chelsea winger would tuck in and affect the third Wolves midfielder who was furthest from the ball. The majority of Chelsea’s regains tended to be through picking up Wolves clearances rather than through a high-press or mid-block strategy.

Wolves set up in a 3-5-2 in possession with Doherty, Dendoncker, Neves, Moutinho and Jonny across the midfield while Jota partnered Jimenez in attack. Wolves had very limited time in possession, looking to transitional moments to try and hurt Chelsea: playing forwards early to Jimenez or Jota who would hold the ball up and wait for more runners to join in and help them to progress beyond. If Wolves couldn’t play forwards early, then they would look to play out wide with their wing-backs advancing on and looking to exploit the space in the wide areas. The idea to play forwards early led to Wolves’ goal which came in a transitional moment.

Out of possession, Wolves operated in a 5-3-2 structure with Doherty and Jonny now tucking in with Saiss, Coady and Boly to form the defensive line of five. Wolves were happy for Antonio Rudiger and David Luiz to have possession. Jimenez and Jota would apply mild pressure but were mainly content to stay either side of Jorginho. Their management of Jorginho was somewhat inconsistent though with both Wolves attackers leaving him free to receive a pass that would break their line on occasions throughout the first half. At other times, they would look to mark him or press the Chelsea centre-backs while blocking the passing lane to Jorginho.

The Wolves centre-backs would also track any runs in behind, preferring to defend those areas rather than try to play offside. The Wolves defensive line spent large parts of the game – particularly after going a goal ahead – positioned on the edge of their penalty box. The five defenders covered the entire width of the box meaning that they were always in a position to move out and block any potential Chelsea shots during open play.

As Chelsea began clipping balls into the box the Wolves defenders managed to make several clearances. The clearances that dropped in-between the defensive and midfield units and became second balls were dealt with by consistent and energetic back-pressing from the Wolves midfield who would ensure that no Chelsea player would be able to receive easily and execute their next action without extreme pressure. Wolves identified that Chelsea were generating some success by switching the ball around their midfield and they responded by moving Jota into a more defensive position out of possession to increase the width of the Wolves midfield and nullify this threat.