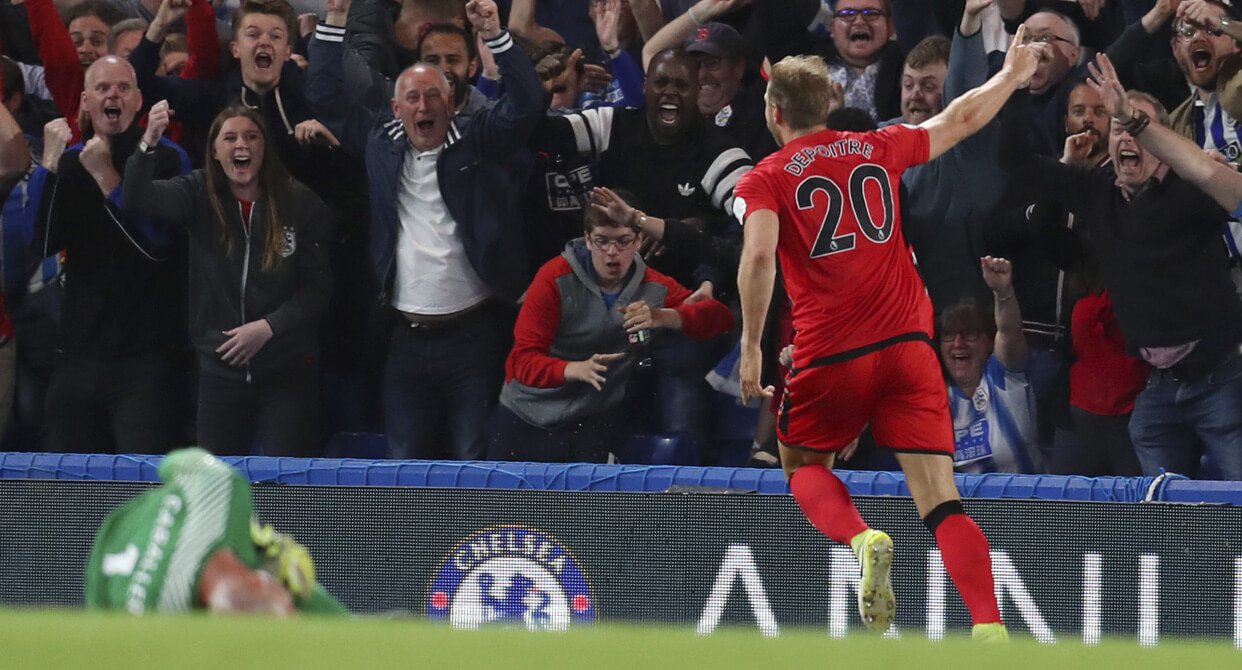 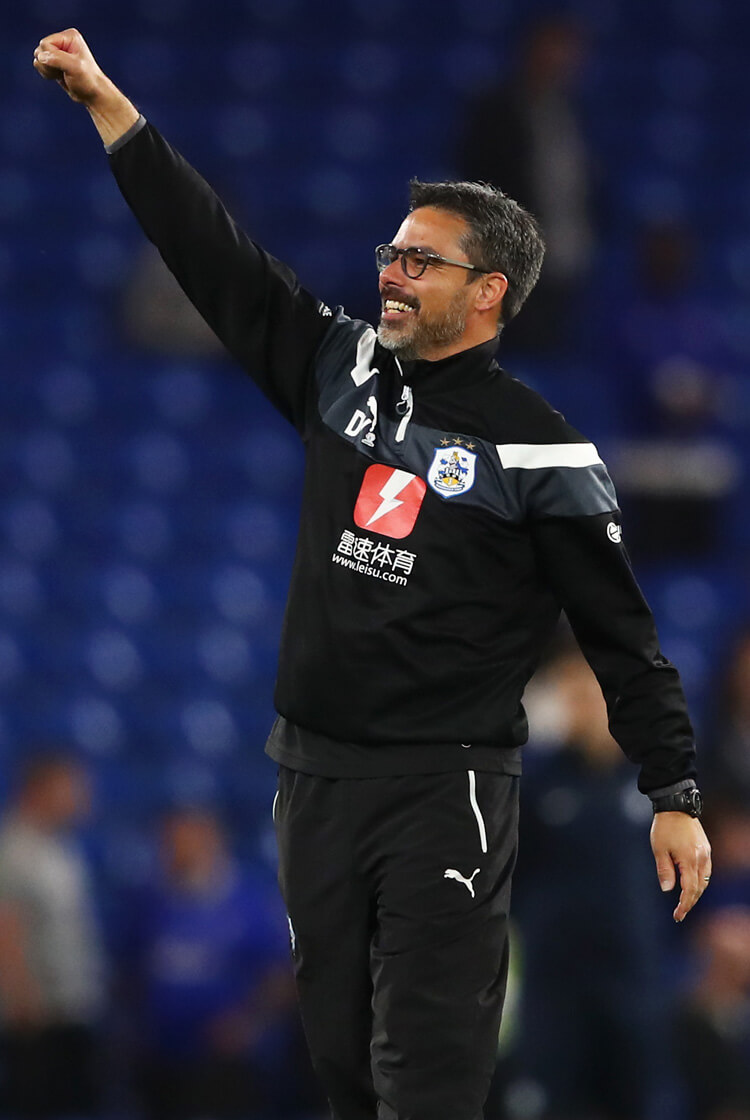 Chelsea’s late rush towards a top-four finish suffered a setback in this 1-1 home draw with Huddersfield, but it was the visitors who stole the headlines by earning the point that guaranteed their Premier League survival. A matter of days after securing a 0-0 draw with champions Manchester City, David Wagner’s men arrived at Stamford Bridge determined to frustrate a team that lined up without either Eden Hazard or the in-form Olivier Giroud. The Terriers threatened to pull off an almost unthinkable win when Laurent Depoitre got the better of Willy Caballero and slotted home early in the second half, but Antonio Conte called for the cavalry and the equaliser came from a fortunate deflection off the face of Marcos Alonso. Here, our experts give their verdict on all the action. 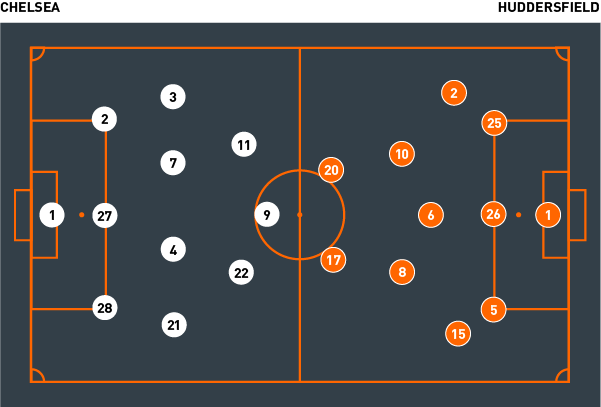 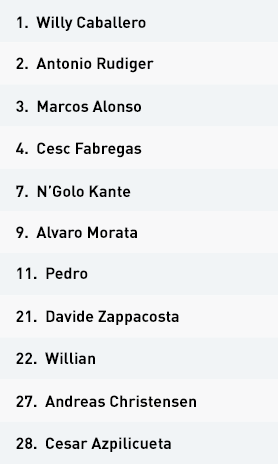 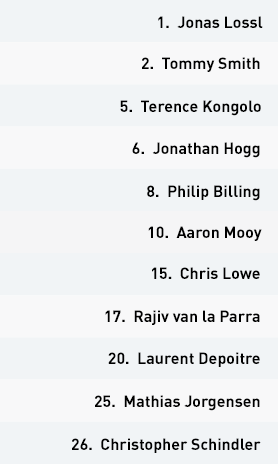 Chelsea started off in their usual 3-4-3 formation. Wing-backs Marcos Alonso and Davide Zappacosta provided the width, which allowed Pedro and Willian to play inside more and operate as either forwards or attacking midfielders in the half-spaces. Cesar Azpilicueta played as the highest of the three central defenders and was often utilised as an extra man in midfield.

Antonio Conte’s men concentrated the majority of their attacks down their right-hand side. There was a common pattern of Azpilicueta, Zappacosta, Cesc Fabregas and either Willian or Pedro (who often swapped sides) forming a diamond from which they would look to try to unlock the Huddersfield defence. The aim was often to free up either Fabregas or Azpilicueta to cross from deep, for Morata or supporting runners – most commonly Alonso – to attack from deep.

They struggled to break Huddersfield down, however, and going a goal behind forced Conte into action. The introduction of Olivier Giroud for Zappacosta pinned the individuals within Huddersfield’s last line of defence and created more space out wide. Azpilicueta moved to the right side and now provided the width as a traditional full-back in a very attacking 4-2-4 formation. Morata and Giroud occupied the three central defenders, while Willian and Pedro (and later Eden Hazard) tended to stay inside the central defenders and full-backs. This gave Azpilicueta and Alonso freedom to create opportunities from wide areas.

This was, however, not a rigid structure – and Alonso was particularly good at adapting his position in response to the movements of Pedro, Willian and Hazard. If they drifted wide, then Alonso would move inside and occasionally found himself in central attacking areas as a result. His goal, albeit a fortunate deflection, came as a direct result of this positional movement.

A late tactic from Chelsea was for the players occupying the outside central defenders and full-backs to drop deeper to receive the ball and drag the defender with them. This would create space in behind for their ball-players to find, but their passing lacked quality and they struggled to make any genuine late chances.

Huddersfield set up in a 5-3-2 formation and had a very clear game plan to soak up the pressure from Chelsea and then look to build on the counter and through direct play. The two wing-backs, Chris Lowe and Tommy Smith, would deal with play in the wide areas, while the three midfielders would act as central screens.

Even when in possession, the two Huddersfield wing-backs were a little hesitant to push forward for fear of being exploited, particularly in the knowledge that a point would be sufficient to ensure their Premier League safety. Smith would occasionally get forward on the right, but Huddersfield maintained defensive security with their three centre-backs staying compact and deep in order to deal with any threat on the counter. Aaron Mooy and Philip Billing provided excellent defensive screens in the midfield block, and worked incredibly hard to cover the ground and regain second balls.

Huddersfield only attempted to play short from goal-kicks once, and that was to entice the press from Chelsea so the long ball to Laurent Depoitre would have a better chance of creating an advantage through second balls. Almost every other attack from the visitors was a direct pass to Depoitre, who got through an exceptional amount of work to win the first ball and hold it up for his teammates.

David Wagner’s team tried on one occasion to build an attack through short passing, but because of their unwillingness to commit numbers forward they had no chance of penetrating Chelsea’s numerical superiority in midfield.

There were occasions in the final 10 minutes when all 11 Huddersfield players were in their own penalty area, Depoitre demonstrating his aerial prowess to help his team out on a number of occasions. The issue here was that the ball was inevitably cleared to Chelsea players, for the onslaught to continue. Late on, they kept Depoitre high and looked to send the ball into the corners for him to hold up and perhaps draw fouls. With the number of Huddersfield players in the box, this made it very difficult for Chelsea to create any clear-cut opportunities; the away team defended valiantly until the final whistle, when they were able to celebrate earning themselves another season in the top flight.

Chelsea looked to operate down their right-hand side as much as possible, the quartet of Cesar Azpilicueta, Cesc Fabregas, Davide Zappacosta and Willian or Pedro used mainly to construct their attacks.

Huddersfield were extremely organised in their 5-3-2 formation. David Wagner had his players working with outstanding intensity throughout.

The visitors’ primary strategy in attack was to send the ball directly to Laurent Depoitre, who was very good at winning the first ball. Aaron Mooy, Rajiv van la Parra and Philip Billing would try to pick up any second balls.

Once Chelsea went a goal down, Antonio Conte’s switch to 4-2-4 and the intelligence of Marcos Alonso in attacking areas caused Huddersfield problems – and created more space for the hosts to build more threatening attacks.