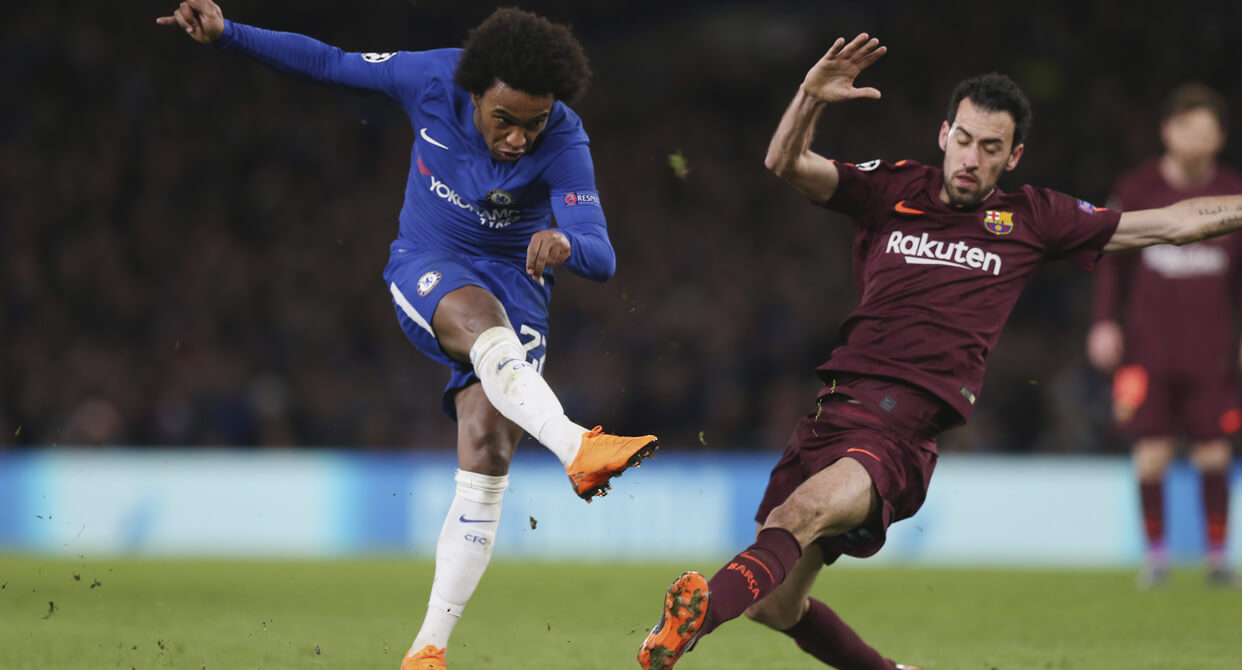 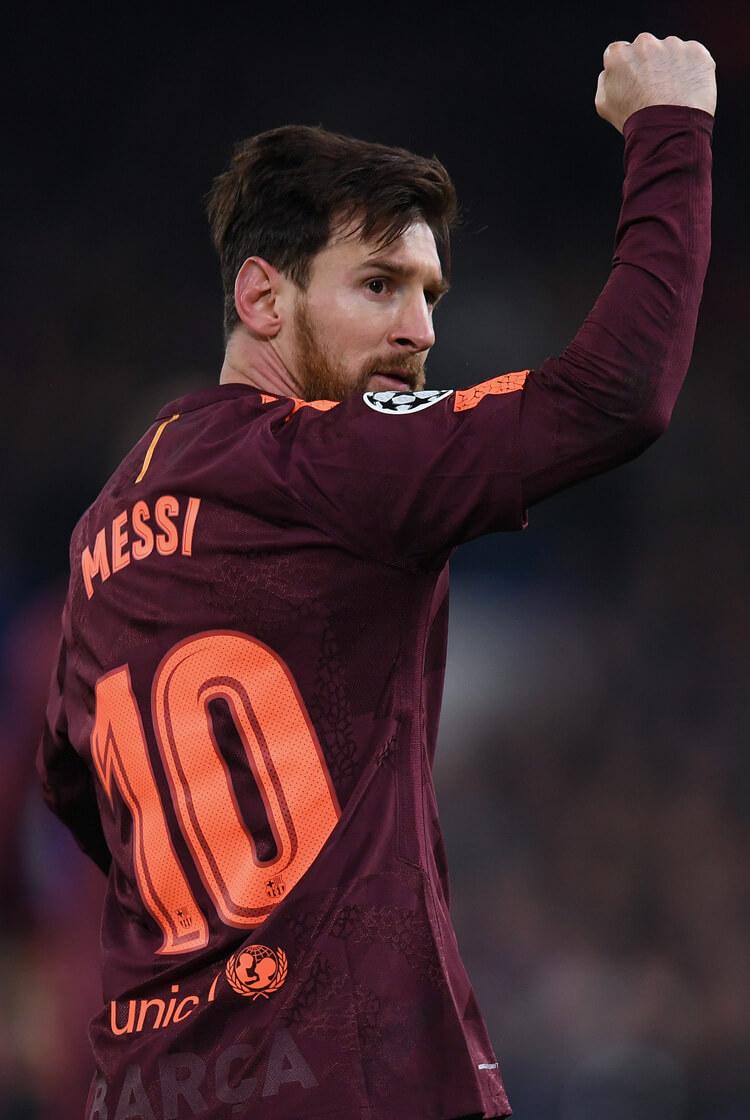 An enthralling, exciting but ultimately disappointing Champions League night for Chelsea at Stamford Bridge, as they let slip a deserved lead against the mighty Barcelona in this first-leg tie. Antonio Conte looked like winning the tactical battle when Willian, who had hit both posts during a brilliant first-half display, fired the home side ahead early in the second half. Seemingly endless Barcelona possession led to few precious clear openings, but a pair of individual errors – first from Andreas Christensen, and then Cesar Azpilicueta – allowed Andres Iniesta and Lionel Messi to combine for the equaliser 20 minutes from time. It was the latter's first Champions League goal against Chelsea. 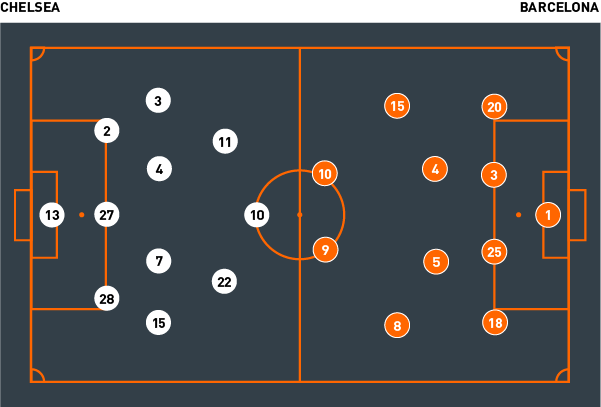 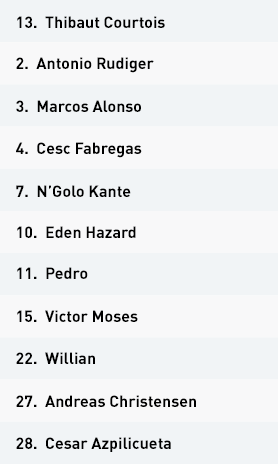 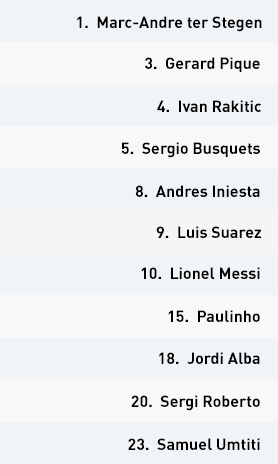 Antonio Conte’s side adopted a 3-4-3 system in attack but spent a large part of the game in their 5-4-1 defensive formation. The superb pressing by N’Golo Kante in the centre of midfield, and a resolute Chelsea defence behind him, closed down Barcelona brilliantly. The depth and quality of their defending made it very hard for the visitors to go forwards and constantly forced them to play back to their centre-backs and goalkeeper, or to try and switch the play from side to side.

The back five, with Victor Moses and Marcos Alonso dropping in alongside the three centre-backs, showed excellent concentration, co-ordination and communication, restricting the space on the inside and limiting the impact of Luis Suarez in particular. Cesar Azpilicueta stood out in this regard, his ability to track and mark Suarez as well as covering the runs of Andres Iniesta at the heart of his team’s defensive solidity. His one mistake unfortunately contributed to the Barcelona equaliser, diving in unsuccessfully to give Iniesta the opportunity to find Lionel Messi after an initial mistake by Andreas Christensen.

Going forward, Chelsea favoured combination play and almost tried to play Barcelona at their own game in playing out from the back. The midfielders, in particular Cesc Fabregas, took up intelligent positions and constantly provided outlets for Thibaut Courtois and the back three, while Eden Hazard regularly dropped back to offer extra support too. Victor Moses struggled to make any serious impact in his one-on-ones against Jordi Alba, but both Pedro and Willian – who hit the post twice before firing the hosts ahead – carried a genuine threat against flimsy marking in the penalty area. The visitors also suffered at set-pieces – most evidently with the corner that led to the goal, when Hazard found Willian in acres of space to drill home from the edge of the area.

Their counter-attacking tactics were simple: direct passes into the forward line or short passes to a nearby teammate in space who would then look to drive forward. Willian carried the greatest threat here too, although Barcelona mainly dealt well with these situations.

Ernesto Valverde’s side employed a 4-4-2 system in both attack and defence. The central midfielders Sergio Busquets and Ivan Rakitic were very active in defence, sitting deep to support their back four and preventing Chelsea from making quick progress through the middle.

However, Barcelona were still guilty of leaving plenty of space in and around the penalty area, from where the superb Willian fired two shots against the woodwork before eventually opening the scoring in the second half. They also struggled to deal with the home side at defensive set-pieces; Chelsea won the first ball on a number of occasions and often created dangerous situations – the goal being the obvious example, as Eden Hazard was left free from a corner to find goalscorer Willian. The pace and trickery of the Chelsea front three caused problems for the visitors throughout, although Barca did cope better as the game went on.

In attack, their preference was to build from the back. Chelsea’s high press proved effective, however, with Busquets, Rakitic and even Messi having to drop deep to support Marc-Andre ter Stegen and the two centre-backs in possession. The strength of the home side’s defensive lines, with N’Golo Kante relentless in the middle, forced Barca to switch the play and look to wide areas – but Paulinho proved anonymous on the right and Iniesta, nominally tasked with finding space on the left, ended up dropping deeper too. Gifted time and space on the ball in an advanced area only once, however, he provided the pass from which Messi stroked home the equaliser. The goal gave Barcelona an edge ahead of the second leg.

On the counter-attack, Barcelona quickly looked for the players who were best placed to launch the move. They found it difficult to pose too significant a threat to an extremely well-organised Blues defence, however.

Antonio Conte focused on making life difficult for the Barcelona attackers, setting up his side to minimise space through the middle and force the visitors wide. The back five, as they played for much of the game, pressed high, intercepted almost everything and limited the impact of Barca’s most dangerous players.

Willian had an excellent game for the home side. A powerful and mazy runner, he posed a huge threat on goal thanks to his long-range shooting ability. He hit the woodwork twice in the first half and scored the opener from the edge of the penalty area.

Despite the strength of the Chelsea defence, Lionel Messi and Andres Iniesta still proved important for Barca. Both had to occupy deeper and more central areas to try and help Barcelona make progress, before finally combining for the equaliser.

Faced with resolute opponents, Sergio Busquets and Ivan Rakitic still played well. The two Barcelona playmakers operated with great patience in the centre of midfield, switching play almost endlessly in a bid to find the space Chelsea were working so hard to close off.