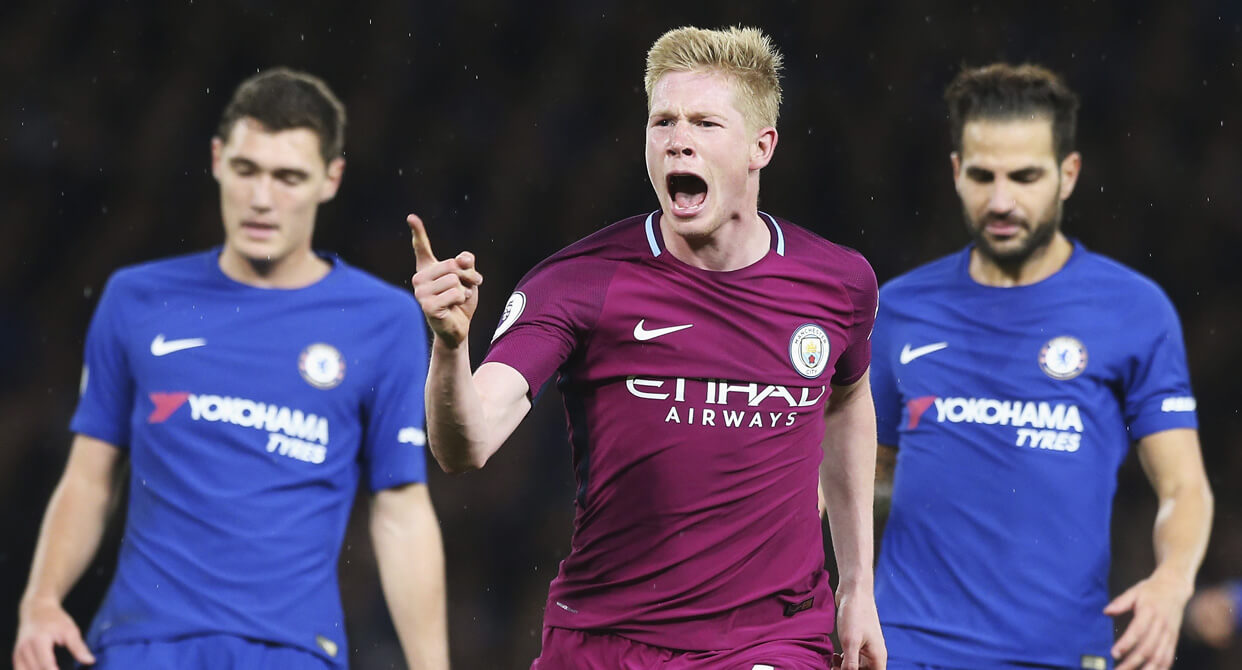 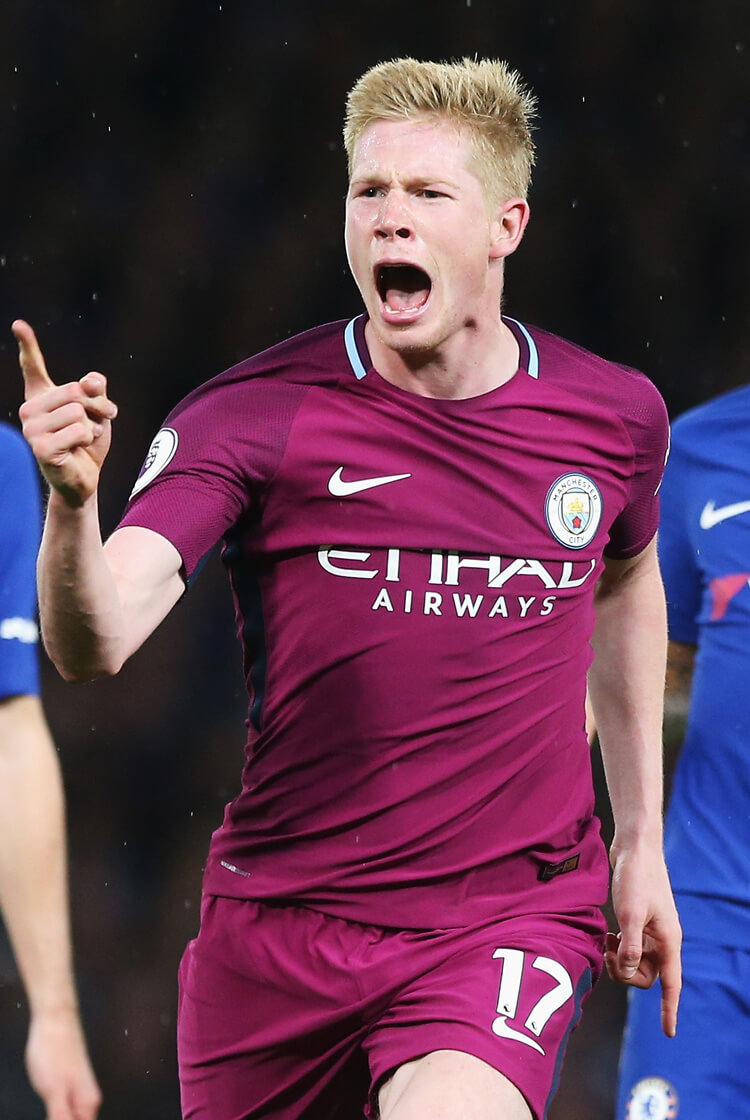 Manchester City served early notice of their status as genuine title contenders with this impressive victory over Antonio Conte's champions at Stamford Bridge. Chelsea were already second best when in-form forward Alvaro Morata was withdrawn before half-time, but with Eden Hazard still short of match-fitness they struggled to make any dents in the visitors' resolute defence. City dominated possession and showed great patience before man-of-the-match Kevin De Bruyne found a rare bit of space between the Chelsea lines and thrashed home the game's only goal midway through the second half. 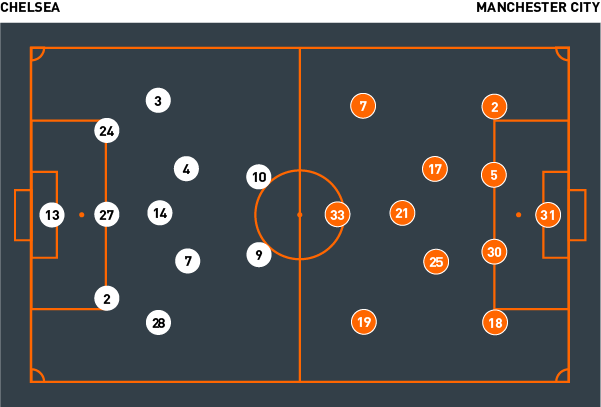 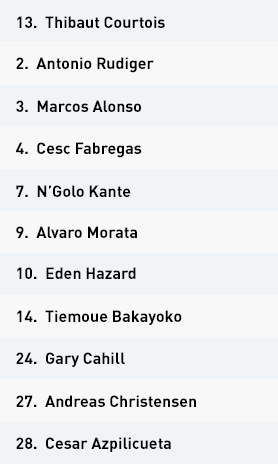 Antonio Conte’s side started in a 5-3-2 formation, at times switching to 5-4-1 in defence, with Cesar Azpilicueta and Marcos Alonso in the wing-back positions and Eden Hazard pushed up to join Alvaro Morata in attack. A first-half injury to Morata saw him replaced by Willian, with Michy Batshuayi later brought on as a lone forward to be supported by Willian and fellow substitute Pedro out wide.

The aim of Chelsea’s first line of defence was to force the Manchester City back four into a direct approach, as they knew that playing out from the back was fundamental to their game. This didn’t work particularly well, as Ederson in the City goal always managed to find an option, meaning that Chelsea had to put considerable pressure on the ball in midfield. N’Golo Kante, Cesc Fabregas and Tiemoue Bakayoko worked hard to anticipate play in their own half, with the result that the team fell back into two compact lines in their 5-4-1 shape, and moved quickly to get numbers back behind the ball in defensive transition.

The home side’s preferred option in attack was combination play, but they found many difficulties in playing out from the back and struggled to get their most dangerous players into advantageous positions. The strong pressure applied by Manchester City across the pitch forced Conte’s side to play direct into Morata or wide to Marcos Alonso, the more offensively minded wing-back – but in reality they found it difficult to create goalscoring opportunities and the injury to Morata gave them even less of an attacking presence. Hazard, himself not long back from injury and looking short of match-fitness, was well short of his best.

On the counter-attack, too, Chelsea failed to transition quickly enough to create or take advantage of any possible imbalances in the City defensive line. They had few opportunities to develop in this part of the game, however – the visitors’ dominance of possession meant they rarely lost the ball.

Pep Guardiola started his Manchester City team in a 4-3-3 formation, switching to 4-1-4-1 or 4-4-2 in defence depending on the situation. They always went straight into a high press, starting with Gabriel Jesus and one of either Kevin De Bruyne or David Silva joining him from midfield. The intention of the City front line was to force the first line of Chelsea possession to go direct. Guardiola’s side showed a constant willingness to harry the player in possession and to intercept in midfield. As a result, their defensive line was barely threatened in the vicinity of their goal.

In the defensive transition, the Citizens tried to win the ball back immediately after losing it, and prevent passes into the space from where the ball was lost. So rarely did they lose possession, however, that they were scarcely troubled in this area of the game.

In attack, the visitors looked to build from the back, with goalkeeper Ederson always looking for John Stones or Nicolas Otamendi in front of him. Guardiola wants his side to dominate play through all the thirds, and although Chelsea tried to block their routes forward they largely failed – even when his centre-backs were covered, Ederson was able to find Fernandinho or De Bruyne. City also looked to push their full-backs into central areas to create the extra man in midfield when in possession. They particularly used left-back Fabian Delph – a midfielder by trade – in this way, to create uncertainty and imbalance in the Chelsea midfield.

Despite their dominance in possession, however, City did find it difficult to find their forward Gabriel Jesus in dangerous positions against a compact Chelsea back five. Instead, they looked wide to Leroy Sane and Raheem Sterling, or as the game went on to the clever movement of Silva or De Bruyne in between the lines. It was the latter who found space on 67 minutes, to take receipt of a ball from Otamendi and thrash home from distance.

Having gone a goal up, several counter-attacking opportunities presented themselves. Sterling, Gabriel Jesus or Sane were always looking to exploit the possible imbalances in the defensive structure of their rivals, looking for spaces in between and in behind the last men in defence.

The early injury to Alvaro Morata hurt Chelsea’s threat in attack. The forward was in a rich vein of form, having scored six goals in his past six games.

Both sides were already missing key players. Chelsea were without the suspended David Luiz and the injured Danny Drinkwater, while City were missing Vincent Kompany, Benjamin Mendy and Sergio Aguero.

In the final third, Chelsea found it difficult to find pathways through the last line of the City defence. The injury to Morata gave them even less attacking presence, while Eden Hazard, not long returned from injury himself, looked short of his best.

Manchester City’s determination to play through the thirds saw them look to use the full-backs to create numerical superiority in central areas. Left-back Fabian Delph was particularly useful in this regard, as this is his more natural position.

City showed great patience in dominating possession for long periods, waiting for the chances on goal they were confident would come. Such was their superiority, that Kevin De Bruyne’s sole strike was enough for the win.