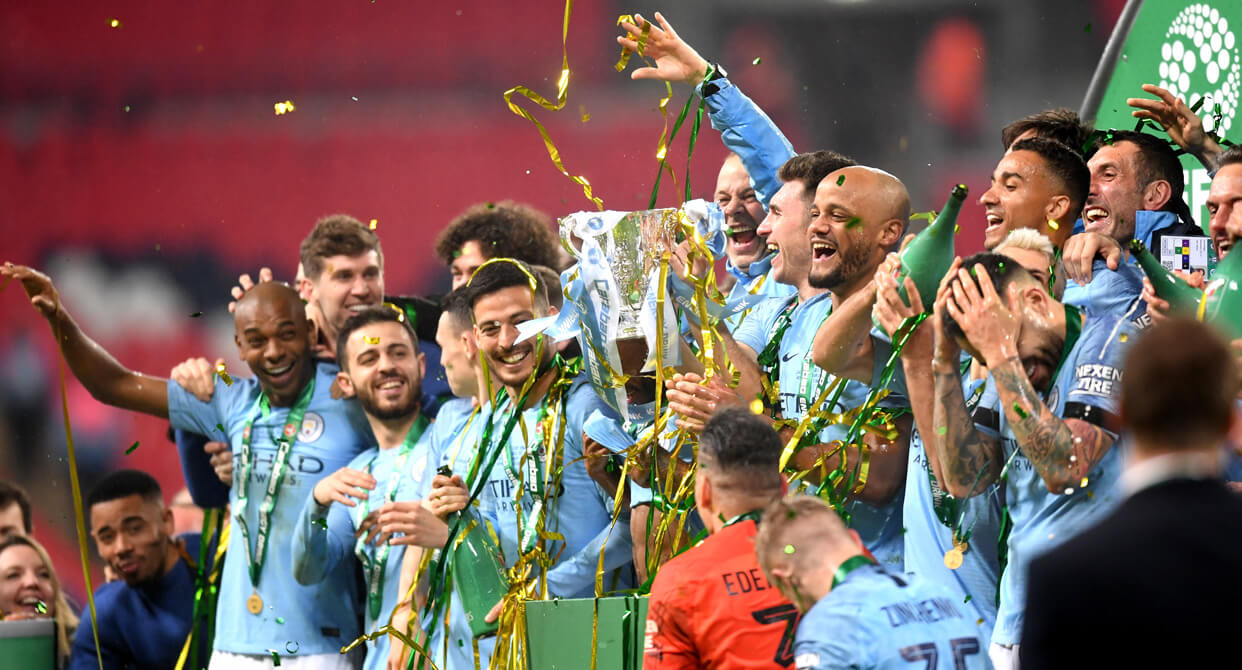 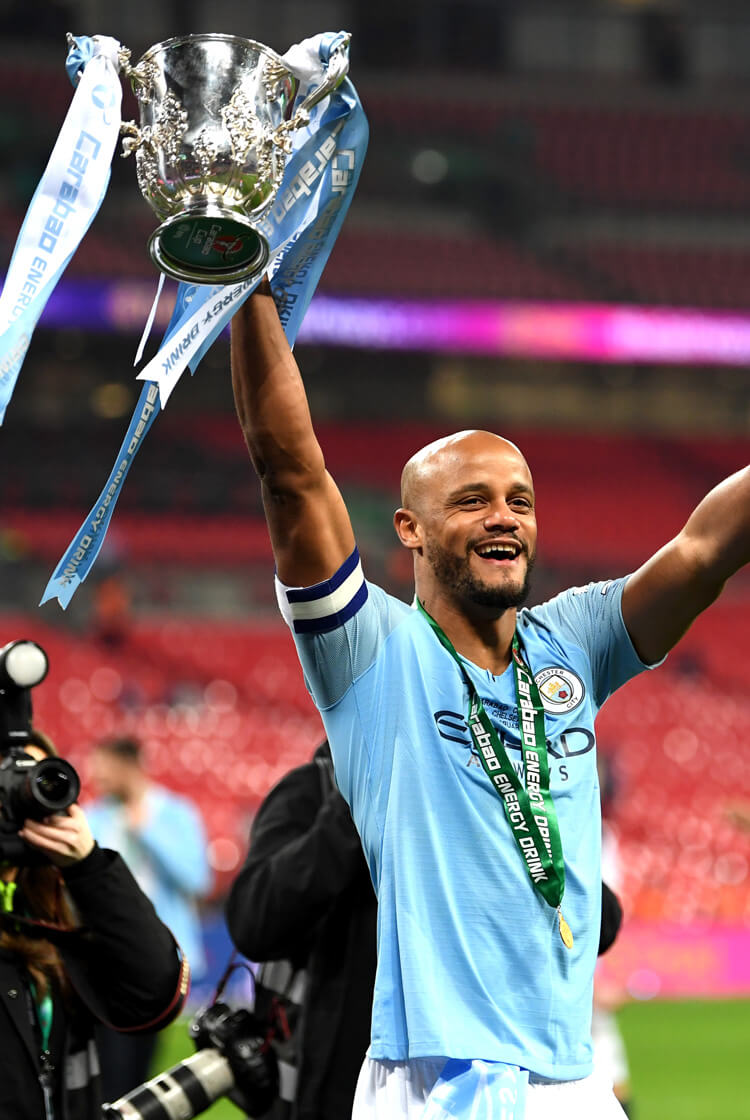 Manchester City retained a trophy for the first time in their history, with a penalty shootout victory over Chelsea at Wembley securing their second consecutive League Cup win. The Blues put up a much improved display after the 6-0 pasting they took at the Etihad less than three weeks before, with Pep Guardiola’s men struggling to create clear-cut chances. In the absence of goals, Chelsea goalkeeper Kepa Arrizabalaga stole the headlines when seemingly refusing to be substituted with the game heading for penalties. The Spaniard remained on the pitch, to the apparent fury of his manager Maurizio Sarri, but was unable to stop four of City’s five penalties and could only watch as Raheem Sterling blasted the winning spot-kick past him. 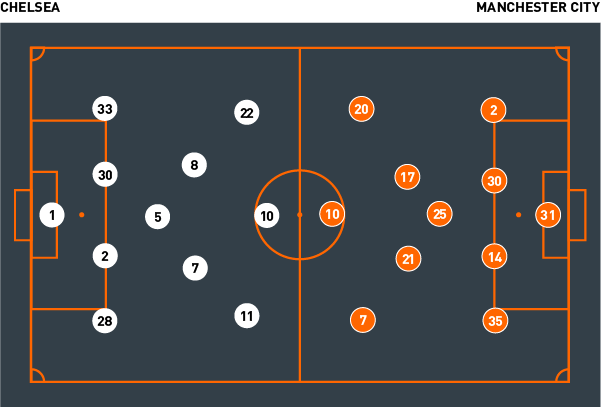 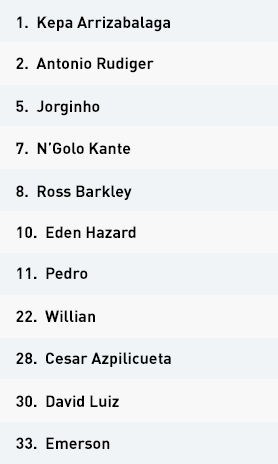 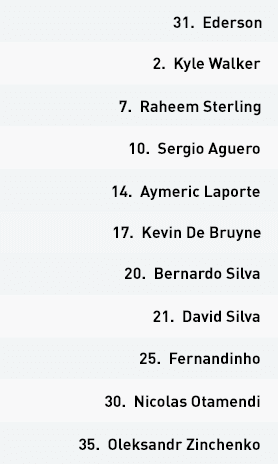 Maurizio Sarri set Chelsea up in his usual 4-3-3 formation, with Eden Hazard as the central forward, supported by Willian on the left and Pedro on the right. Their early attacking play was limited, as their defensive mid-block structure restricted their counter-attacking capacity. The majority of Hazard’s movements were towards the ball, rather than into the space behind the Manchester City back line.

Hazard’s movements also failed to make use of Jorginho’s first-time passes around the corner, as both wingers received with consistent pressure from behind. Quick sets back into Jorginho – and movements away from the ball – opened up a passing lane into Chelsea’s lone forward, but his eagerness to receive to feet didn’t match up with the playmaker’s intentions with the ball.

Jorginho’s forward play was limited during Chelsea’s rare builds from Kepa Arrizabalaga. Both David Silva and Kevin De Bruyne pressed the Italian as he tried to receive from David Luiz and Antonio Rudiger. However, when Jorginho evaded the press, he lacked forward passing options, unless Ross Barkley moved wide to drag Kyle Walker to the ball. This gave more space for Willian to receive, with Fernandinho blocking central access into Hazard. Willian could then hit the spaces in behind for Hazard, although City always had the numbers back to limit the danger.

In the second half, Chelsea’s central midfield trio expanded, with Barkley and N’Golo Kante moving wider. Inside runs from Willian and Pedro enabled progression, with Kante or Barkley linking to create third-man combinations out of pressure. However, Chelsea still lacked penetration through the defensive line. The one exception was when Willian’s long ball forward released Hazard in behind, for the Belgian to cut back for Kante – unfortunately for the Blues, the Frenchman powered his shot over Ederson’s bar.

Normal time ended with a flurry of attacking transitions, as legs started to tire, but Chelsea finished the stronger. The late introduction of Callum Hudson-Odoi added speed to the Blues’ attack, with Ruben Loftus-Cheek replacing Barkley in midfield and Gonzalo Higuain brought on for extra time – the latter’s arrival allowed Hazard to shift to his preferred left side. His inside movements complimented Loftus-Cheek’s forward runs across the line of the ball, as the England international tried to drag markers away for Hazard to continue his dribbles inside. In the end, though, Chelsea created few chances and were defeated in a penalty shootout after Jorginho and David Luiz both failed from the spot.

Without the ball, Chelsea formed a 4-5-1 mid-block and rarely pressed the City back line. They allowed their opponents to move the ball to halfway with minimal interference, preferring a much deeper first line of pressure compared to their last, disastrous outing against City. Wingers Pedro and Willian blocked off central access into City’s advanced central midfielders, with Kante or Barkley then stepping forward to eventually press the back line. This opened up wide areas for City, but Chelsea’s aggressive marking from their full-backs ensured progression was limited.

The most dangerous periods of play came as City’s rotations temporarily dragged Chelsea’s wider players out of their organised structure, with Emerson, Barkley, Willian and David Luiz slower to adapt to rotations on the City right. The Blues maintained their organised block, however, and even though they became more expansive in possession – thus inviting more direct transitions and opening up better access in to Sergio Aguero – they rarely allowed the holders any clear-cut opportunities. This continued through extra time, when they stayed compact enough to block forward passing options and prevented City from scoring against them for the second time this season.

Manchester City set up with a 4-3-3 attacking structure, with Raheem Sterling and Bernardo Silva providing the attacking width outside Sergio Aguero. Both full-backs – Oleksandr Zinchenko and Kyle Walker – initially remained part of the back line. This pushed David Silva and Kevin De Bruyne higher within the inside channels, as they looked to receive in behind the Chelsea midfield. Only when either N’Golo Kante or Ross Barkley stepped higher to press Man City’s back line did either of the central midfielders drop to receive to feet in front of Chelsea’s midfield.

De Bruyne soon dropped to the right side of the back line, pushing Walker up and allowing Bernardo Silva to rotate inside. With left-back Emerson now having to deal with the City right-back, Bernardo Silva was free to receive and attack the space between Emerson and left-sided centre-back David Luiz.

Despite all of City’s possession, Chelsea’s mid-block remained resolute, limiting access into the likes of Sterling and Sergio Aguero. In the early parts of the second half, Chelsea’s central midfield opened up somewhat – when City regained the ball in midfield, they then had much more open space to attack. Forward runs from the likes of De Bruyne and Bernardo Silva helped draw players to the ball, which freed up Aguero even further; the Argentine did turn home a low Nicolas Otamendi drive, but he was marginally offside.

City’s attacking play became more direct in the second half, with the dropping De Bruyne or substitute centre-back Vincent Kompany searching for diagonal passes out to the furthest winger. From here, well-judged runs in behind Chelsea’s aggressively pressing full-backs often created penetration into the penalty area. The holders just lacked the space to create the perfect final ball.

Ilkay Gundogan and Leroy Sane were introduced as the game drifted towards extra time, but City were unable to break down Chelsea’s organised back line. Danilo replaced the injured Fernandinho as the single pivot, but the holders failed to maintain their intensity in possession and rarely committed many of their players ahead of the ball. Sterling created their only chance of the added period, but Aguero couldn’t turn home the loose ball and the game went to penalties – despite Sane’s miss, Sterling hammered home the winning spot-kick as the holders retained the trophy.

Out of possession, Pep Guardiola’s men opted for a more proactive press, stepping higher as Chelsea built from goalkeeper Kepa. This helped them win possession higher up the pitch, although with their full-backs kept deep their potential on the counter-attack was limited. Once Walker stepped higher, City were briefly exposed to the direct running of Willian from the Chelsea left.

City’s 4-4-1-1 defensive block was based around limiting Jorginho’s ability to receive from the Chelsea back line. Depending on which side the Italian dropped to pick up possession, one of De Bruyne or David Silva would step higher to press Chelsea’s single pivot. The only real pattern of play that concerned City was when Barkley dropped into the wider area to lure Walker forward, freeing Willian to receive from Jorginho. This then helped release Eden Hazard in behind, but even then the Belgian faced too much of a defensive overload to trouble Ederson.

In the second half, Chelsea’s wider central midfielders helped Man City transition into attack, but posed more of a threat to their back line. With City continuing to push David Silva or De Bruyne on to Jorginho, Chelsea had more space through which to combine around City’s higher block, and then penetrate through midfield. The Blues’ most threatening play came as they searched for early balls over the City defence, attacking the space in behind City’s high line. Fortunately, Kante wasted the one major chance Chelsea created, and they failed to create anything more of note in extra time.