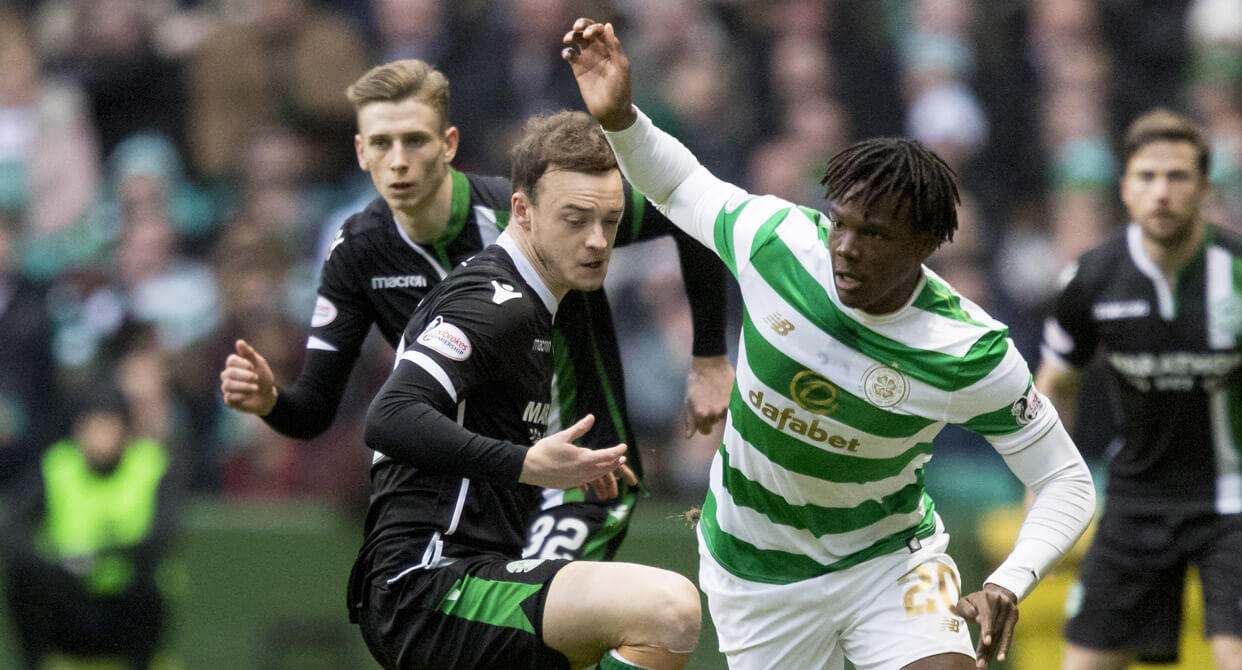 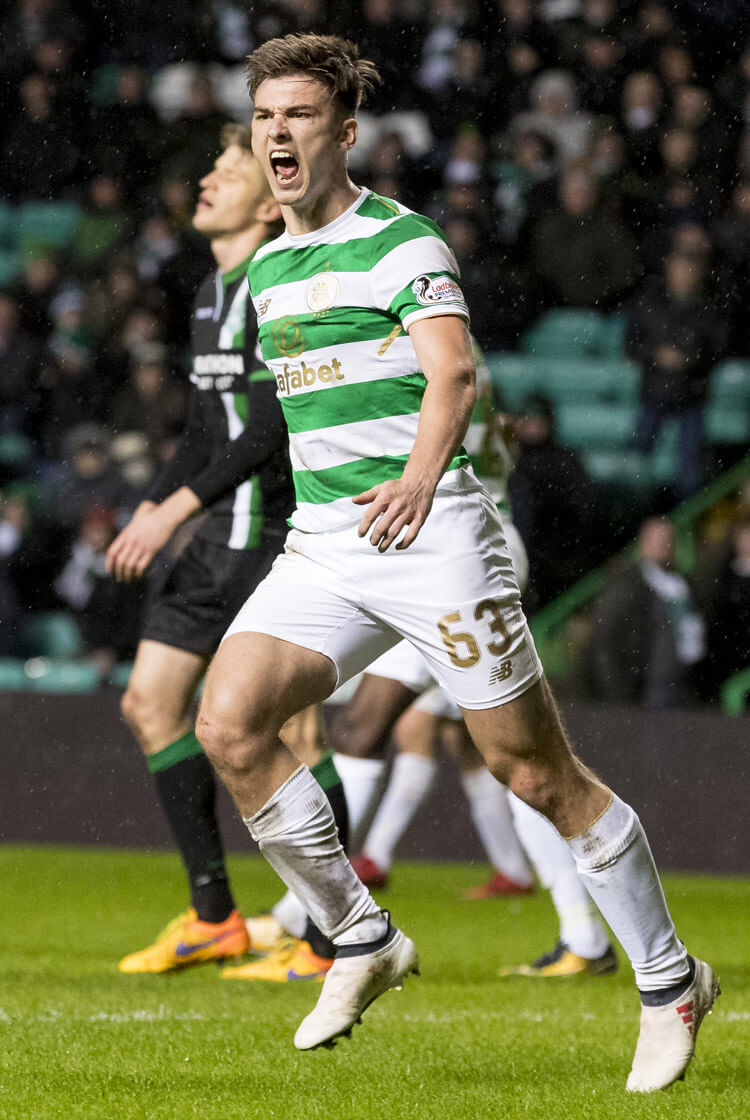 Action Plus via Getty Images

Champions Celtic maintained their healthy lead at the top of the Scottish Premier League with a hard-fought victory over Neil Lennon’s Hibernian team. Leigh Griffiths was the matchwinner for the home side, although he limped off to be replaced by the dangerous Moussa Dembele soon after scoring the game’s only goal. The visitors worked hard to find a way through Celtic’s well-organised defensive shape in the second half, but to little genuine effect. 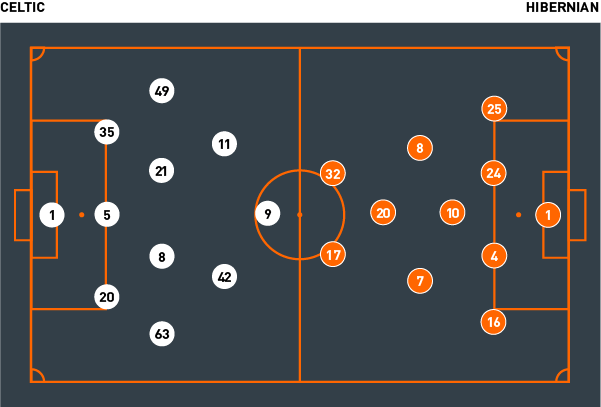 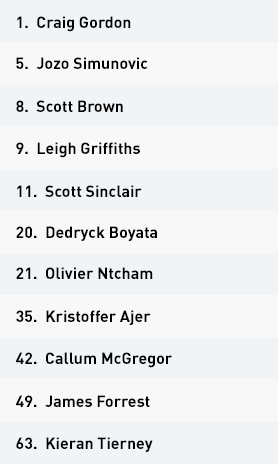 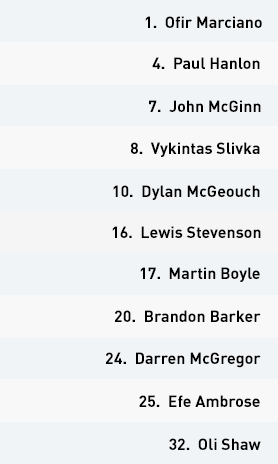 Celtic lined up in a 3-4-3, shifting to 5-4-1 in the defensive phase – although at times in the second half they also employed a 4-4-2. Celtic’s first line of pressure ¬– Leigh Griffiths and Scott Sinclair, and then Moussa Dembele after he replaced Griffiths – made life difficult for Hibernian in their build-up. They tried to force Hibs’ attacks wide, preventing passes into central players, and constantly pressed the ball-carrier, with Scott Brown, Olivier Ntcham and Dembele particularly effective.

Pushing Hibs wide did occasionally cause the Celtic defence problems in the final third, as they faced a number of crosses and in the second half left some gaps in their defensive live. Maintaining numerical superiority in central areas limited the threat, however.

The pace and clever movement of Sinclair and Dembele in particular enabled them to find space in central positions high up the pitch – but they also enjoyed plenty of success in wide areas, where full-backs Lewis Stevenson and Efe Ambrose conceded space in behind. Celtic never stopped looking for runs in between and beyond the defensive line, especially following the introduction of Dembele.

In the offensive transition, they looked to get the ball forward as quickly as possible, either to the strikers or a nearby teammate. Here, at least, the Hibs press was relatively effective.

Hibernian lined up in a 4-4-2 diamond, shifting into an orthodox 4-4-2 in the defensive phase. Their first line of pressure – Oli Shaw and Martin Boyle – tried to direct Celtic’s build-up towards the wings and prevent them from playing into central players. However, they struggled against a team that profited from the constant movement of Scott Sinclair and Moussa Dembele, and had persistent problems with crosses from out wide – particularly on their right side, from where the ball that led to Leigh Griffiths’ winner came. Centre-back Darren McGregor put in an excellent display, however – he was always ready and well-placed to cover or intercept when his teammates needed him.

Hibs also had trouble in the defensive transition, due to the speed of a Celtic attack featuring Sinclair, Dembele, Callum McGregor and Kieran Tierney. With that in mind, they always tried to pressurise the ball-carrier as soon after losing possession as possible.

In the offensive phase, their preferred option was to play out from the back – but Celtic pressed well and forced Hibs to play it long into strikers who won little in the air against the home centre-backs. With very little success against a compact and organised Celtic midfield, the visitors constantly had to look wide for a better chance of progression. This worked to a point, and more so when spaces appeared in the Celtic defensive lines in the second half, but despite working a good number of crossing opportunities they created few chances of real note. A direct approach on the counter-attack offered little threat.

Celtic showed their versatility in their ability to change their attacking structure from 3-4-3 to 4-4-2 – and in defence from 5-4-1 to 4-4-2 – without showing any major imbalances in their game.

Scott Sinclair had a great game. He constantly managed to take advantage of the central spaces that Hibs left, and worked hard to offer himself as a free man in attack at all times.

Despite an early injury to goalscorer Leigh Griffiths, Celtic improved for the introduction of Moussa Dembele. He has great mobility, and his ability to find space in central areas meant he was a constant threat.

Hibernian worked hard in the defensive phase, particularly to close off central spaces and prevent Celtic playing down the middle. They were also effective at pressing the man in possession when losing the ball. However, they struggled to deal with the Celtic attack in wide areas.

Darren McGregor was excellent for Neil Lennon’s men. The centre-back was always available to cover for his teammates and intercepted numerous Celtic attacks.