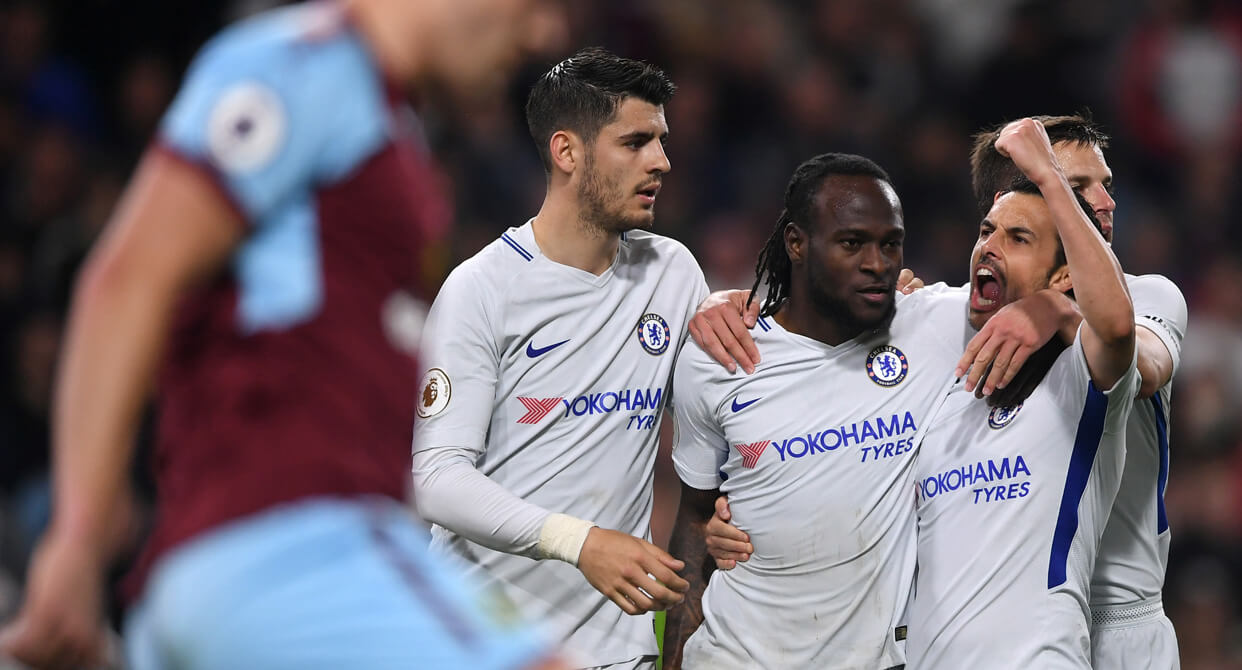 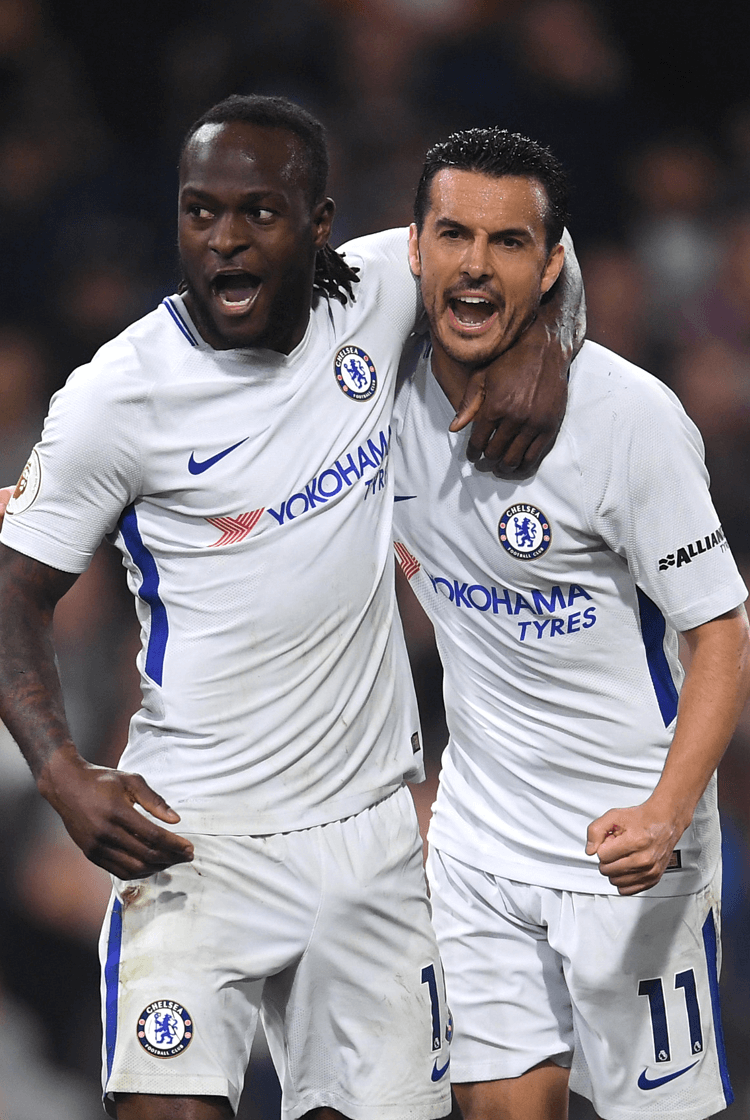 Chelsea kept their hopes of a top-four spot alive with this hard-fought away win at a Burnley side also on the hunt for European football. A Kevin Long own goal midway through the first half gave Antonio Conte's men a lead they held until early in the second, when the in-form Ashley Barnes struck back for the Clarets. Sean Dyche and his team enjoyed parity for only five minutes, however, as Victor Moses netted his fourth goal of the season to earn the visitors all three points. Here, our professional coaches analyse the tactics and key moments from the Premier League contest. 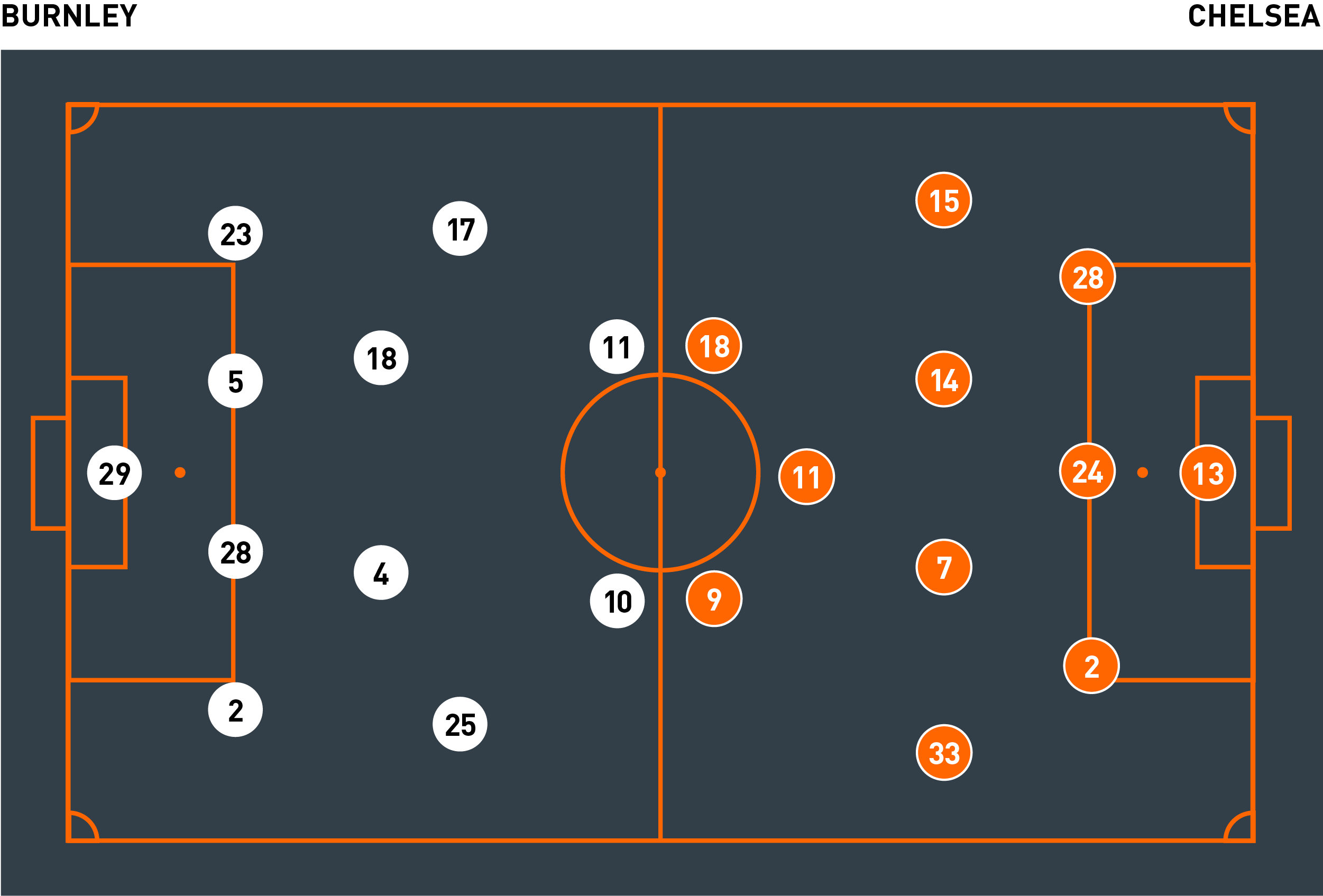 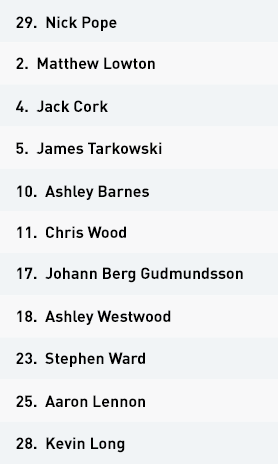 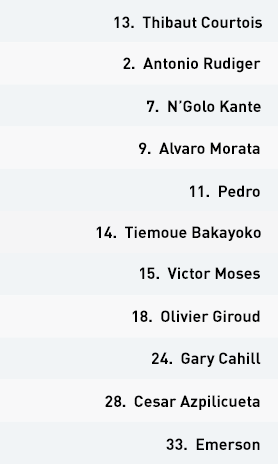 Burnley set up in their typical 4-4-2 system and tried to take early initiative by stepping high on Chelsea’s build-up play, pressing aggressively in an attempt to take control.

Chelsea did initially find this press intimidating, but the physical presence of Olivier Giroud and Alvaro Morata allowed the away side to contest the long balls and work their way forward. This enabled Chelsea to push Burnley back into a lower block and establish their authority on the game.

Burnley had problems structurally when in a lower defensive block, as they attempted to cope with Chelsea’s system in a rigid 4-4-2 set-up. Often, when wing-backs Victor Moses and Emerson pushed high to provide width to Chelsea’s play, Johann Berg Gudmundsson and Aaron Lennon would track back, creating a back six for Burnley. Chelsea were left with a central overload in midfield and space to play in to Giroud and Morata, whose movement was effective in breaching Burnley’s back line.

Problems also occurred when Gudmundsson needed to step higher. The first goal Burnley conceded came from a miscommunication between Gudmundsson and Stephen Ward, who let Moses in behind, resulting in an own goal by Kevin Long. Burnley tried to regain their shape and organisation, but struggled to retain the ball and build meaningful attacks.

Quick switches of play could shift the Chelsea midfield three and open space to double up on their wing-backs, but Matthew Lowton and Ward were not offensive enough in the first half to take advantage of this for Burnley. They often received the ball too low, thereby allowing the Chelsea midfielders to shift horizontally and pressurise the full-back while keeping their back five in structure. This often resulted in longer and straighter balls being played in to Chris Wood and Ashley Barnes, which the aerially strong Gary Cahill had little problem in dealing with.

Burnley started brighter in the second half, with Gudmundsson and Lennon switching sides. This tactical switch allowed the Burnley wingers to move inside more naturally and take advantage of any space behind Chelsea’s midfield three. This also encouraged the full-backs to display their attacking intent. Chelsea found this difficult to cope with, and the switch was successful when Gudmundsson moved in from the left, with Lowton overlapping. The former's long-range effort bounced off Barnes and into the back of the net.

The weakness of this switch, however, was that Lennon had been left with the responsibility of tracking Moses, who was the more offensive wing-back for Chelsea. Lennon was often caught ball-watching and was late in his defensive runs when Chelsea switched from left to right. It was here that the away side found success, with Moses meeting Emerson's cross to score the winner.

Late on, Burnley introduced two attacking players in Sam Vokes and Nahki Wells. While they came close from a few set-pieces, Chelsea’s back line continued to deal with Burnley’s attacking physicality and presence well, preventing any chances and coming away from Turf Moor with the win.

Chelsea started in what was for them a very rare 3-4-1-2 system featuring two centre forwards in Alvaro Morata and Olivier Giroud. Antonio Conte made six changes from their previous game, with one eye on his side’s upcoming FA Cup semi final against Southampton.

Chelsea’s main attacking threats have typically come from Willian and Eden Hazard this season, with the pair looking to penetrate centrally between the lines. But Conte opted to keep the pair on the bench, instead starting two powerful centre forwards together. As a result, they had a new dimension to their attacking play at Turf Moor. Giroud and Morata combined well, with Giroud frequently dropping to link play and connect with the midfielders. This gave Burnley significant problems in the opening half hour.

There was a clearer emphasis on moving the ball to wide areas, where Moses and Emerson were often in good attacking positions to create crosses; however, with Burnley often falling into a back six, there was an opportunity to overload centrally and create through the middle.

The defensive roles of N’Golo Kante and Tiemoue Bakayoko allowed freedom for Pedro to pick up the ball in different spaces and add to the attack. Pedro was also influential in transitions, carrying the ball and setting key counter-attacks – particularly in the second half, when Burnley took more initiative and left themselves vulnerable defensively.

In the build-up, Chelsea had success when Kante dropped to receive the ball, drawing in the press from either Ashley Westood or Jack Cork. This opened space for Chelsea’s front two and Pedro in the number 10 position. If Johan Berg Gudmundsson and Aaron Lennon tucked in to support the Burnley midfield, Chelsea could exploit the wide areas.

As has often been seen this season, though, Chelsea struggled to take advantage of their superiority and found pushing for a second goal difficult. Burnley predictably became more offensive in the second half, forcing Chelsea into a lower block. This did, however, provide good counter-attacking opportunities and Chelsea, after Ashley Barnes had equalised for Burnley, did well to regain the initiative and restore their lead.

Hazard was introduced for the final 20 minutes, taking the place of Morata, but the Belgian took a deeper role to link the play, and immediately displayed his influence in helping Chelsea to control the late stages of the game and ultimately seal the three points.

Chelsea had control of the game in the first half. They dominated possession in key areas and their shape, with a back three and midfield three, meant they created significant central overloads.

The two Chelsea strikers, Olivier Giroud and Alvaro Morata, helped with this overload. When Burnley dropped their wingers to support the full-backs against Chelsea’s wing-backs, the away side displayed their threat centrally.

When Pedro drifted and occupied the Burnley wingers, this caused problems in wide areas. This was highlighted when Victor Moses got in behind for Chelsea to score the first goal.

The lack of attacking intent from the Burnley full-backs meant Chelsea often stayed in good defensive shape, dealing with any long balls well. The spaces either side of Pedro and Tiemoue Bakayoko were rarely exploited.

Burnley’s switching of their wingers to opposite sides, combined with the encouragement of their full-backs to become more offensive, helped to push Chelsea back. While Chelsea enjoyed some counter transitions from this, it was this switch that led to Burnley’s equaliser.

Chelsea did well to re-establish control of the game, again creating a goal after Aaron Lennon had switched off from his defensive responsibility, leaving Victor Moses free with time and space to finish.