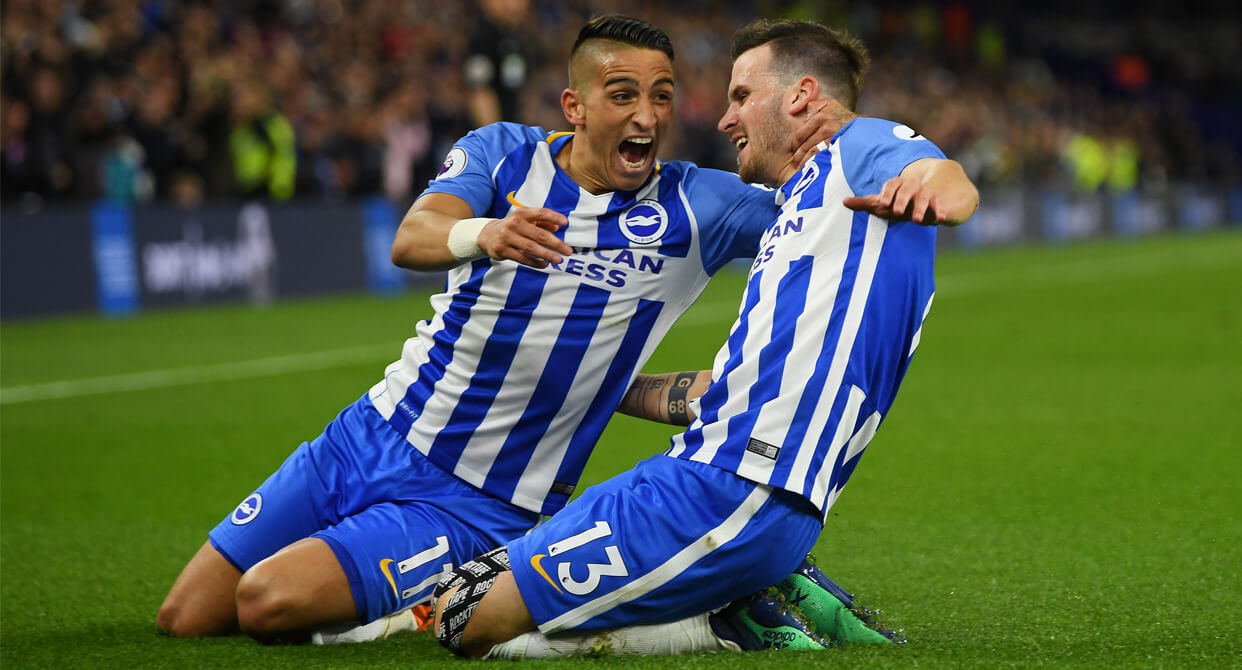 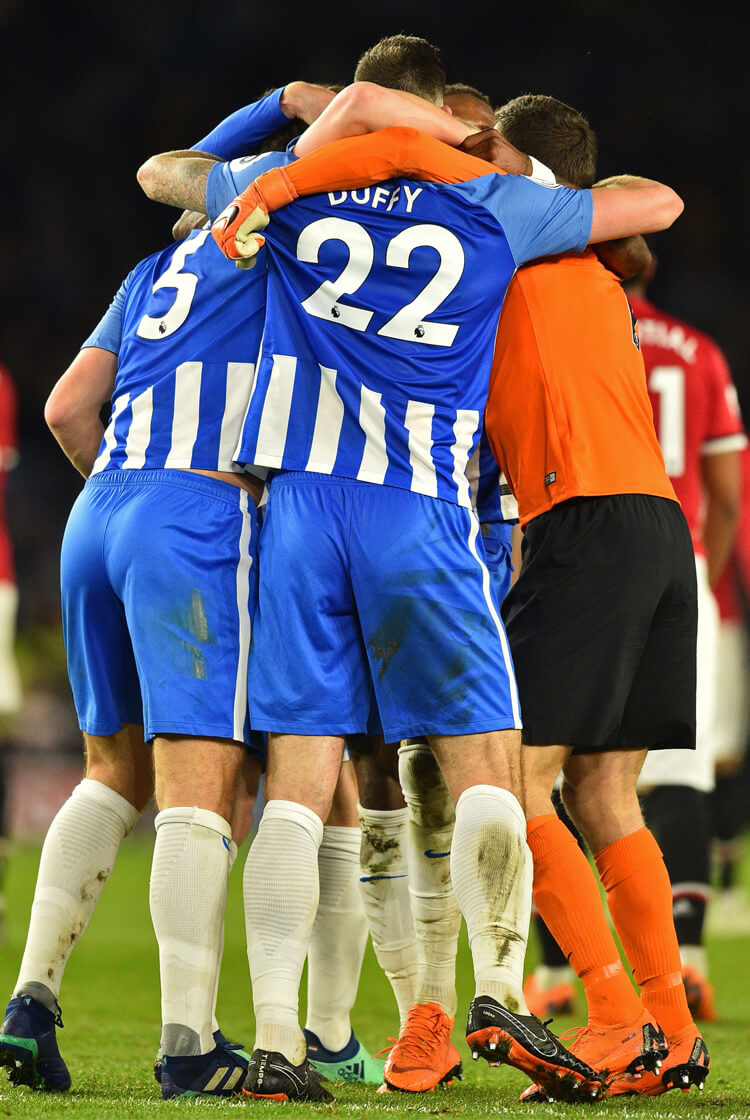 Brighton confirmed their Premier League status for another season with their first win over Manchester United in 36 years. Pascal Gross scored the only goal of the game, heading home from a Jose Izquierdo cross in the 57th minute, to ensure the Seagulls would remain in the top flight for the 2018/19 campaign. Chris Hughton's side needed the assistance of goalline technology to confirm Gross' finish, but deserved to come away with the three points. Here, our professional coaches analyse the tactics and key moments from Brighton's win – and assess what went wrong for Jose Mourinho and United. 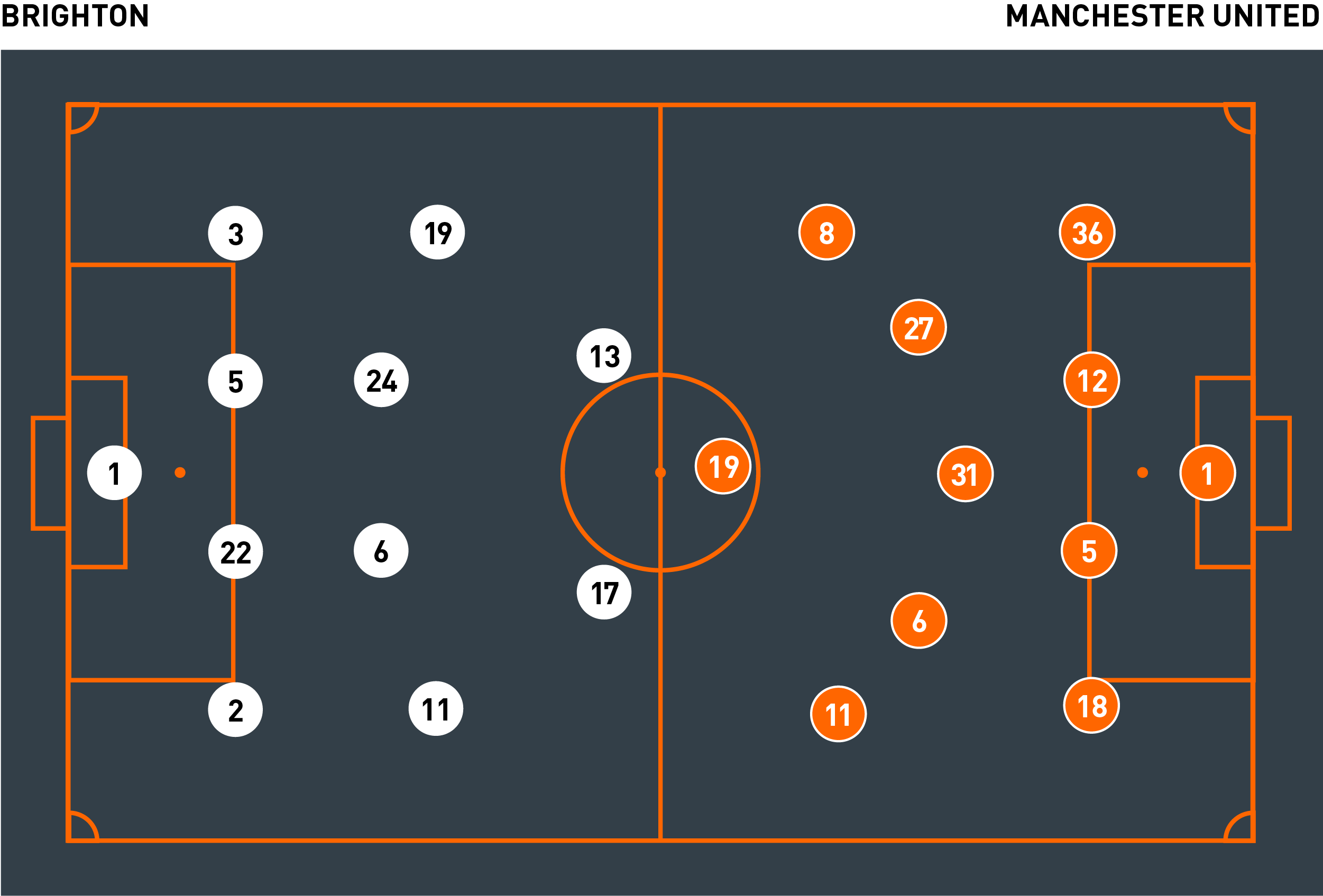 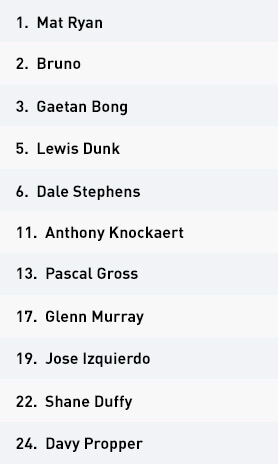 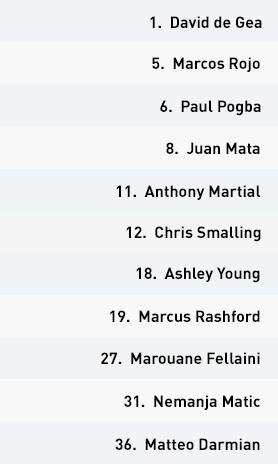 Brighton set up in a compact 4-4-2 structure. They used a high defensive line, with their midfield and attacking units remaining close. This did leave space in behind for attacking balls over the top, but this was rarely an issue.

Brighton enjoyed a positive opening 10 minutes, seeing plenty of the ball in good attacking areas. They disrupted Manchester United’s early rhythm with aggressive pressing in the midfield areas, and allowed the away side to build using short passes from defence into midfield before applying heavy pressure. Their packed defensive structure contained United’s attacks well.

The hosts mainly attacked during transitions from midfield. With Ashley Young moving very high when in possession for United, Brighton had space behind him in which to drive forward. Anthony Knockaert was set free on a number of occasions, creating chances and forcing David de Gea into early saves.

Knockaert continued to drive down Brighton’s right side and began to cut across the United defence. As he drifted across, Bruno could overlap from right-back into the vacant space. Brighton now had control of the wide area during transitions, and could provide crosses for Glenn Murray to attack inside the penalty area. They also held strong in defence for the remainder of the first half, with Mat Ryan rarely tested despite all of United’s possession.

The Seagulls stayed loyal to the same game plan in the second half. They still posed a threat with counter-attacks from deep, as United struggled to make consistent recovery runs. Brighton committed more players forward, sensing an opportunity to strike. Dale Stephens and Davy Propper alternatively joined the counter-attacks from central positions. This increased their attacking numbers and stopped United from doubling up defensively on Brighton’s dangerous wide players.

With Chris Hughton’s team now able to attack their opponents' isolated full-backs, they struck hard. Jose Izquierdo cut back a high cross, and Pascal Gross rose highest to nod home. Despite the best efforts of Marcos Rojo, the ball snuck across the line, giving the home side the lead.

Brighton remained dangerous on the counter, as United threw players forward in a desperate attempt to grab an equaliser. With both their full-backs now high up the pitch, the Seagulls had even more space to attack. They couldn’t add to their goal, but were content to sit in a deep defensive block and see out a win that confirmed their Premier League status for another season.

After an initially slow start, United gained control of possession and the game. Nemanja Matic started by dropping deep in between the two centre-backs when in possession. But as they had fewer players ahead of the ball, this reduced the quality of the away side’s build and resulted in prolonged periods of possession deep within their own half.

Matic soon began to move behind Brighton’s pressing strikers, thereby enabling United to build through the hosts’ defensive lines and stretch their opponents in the process. As they built from deep, they tried to overload the wide areas, often surrounding their teammate on the ball. Their main point of entry in the final third was in the wide areas – but with limited options in behind, United struggled to build effective attacks on goal.

Rashford, playing as the lone centre forward, initially provided the height in attack. Most of his movements were towards the ball and into Brighton’s congested block, however. It wasn’t until the latter stages of the first half that the young striker started to attack the space in behind. By this point, United’s frustration going forward was obvious.

They continued to overload the wide areas in the second half, building mainly down their left as Juan Mata moved across from the right to join Ashley Young and Martial. Paul Pogba offered support in attack and Rashford continued to drop short, overloading the ball and the surrounding areas.

Marouane Fellaini, meanwhile, drifted away from the ball and towards the edge of the penalty area, where he was often marked by the smaller Brighton full-backs. United, though, failed to utilise his threat. Had the visitors quickly switched the play, Fellaini might have moved into threatening attacking positions.

After conceding midway through the second half, United reacted by throwing more players forward. Luke Shaw was introduced at left-back, and both he and Ashley Young rampaged down the wings, providing crosses and width in attack. Pogba and Fellaini were also more direct in possession, as they looked to charge into the box with the ball. Brighton’s defence held strong throughout, though, with their centre-backs dealing well with the aforementioned United pair.

Jose Mourinho’s team couldn’t penetrate Brighton’s defensive block, and became vulnerable to the threat of Brighton on the counter. As the Seagulls dropped into a 4-5-1 shape late on, United were condemned to a disappointing away defeat.

The key battle focused on United’s full-backs, particularly Ashley Young. As Young travelled forward in possession at left-back, this naturally left space behind the 32-year-old. Marcus Rojo failed to provide defensive cover during transitional moments at left centre-back, and was a key target for Brighton to exploit.

Anthony Knockaert capitalised by driving forward at pace, exploiting the space left by Young. The Frenchman cut inside and isolated Rojo in one-versus-one battles frequently throughout the first half. United eventually began to cut off his access inside, with Nemanja Matic stepping across during transitions and forcing Knockaert into defensive traffic.

Bruno sporadically overlapped from right-back for Brighton, but didn’t provide attacking width consistently enough. Had he been a more readily available outlet in offering crosses into the box, Brighton’s attacks could have been much more effective when Knockaert ran into trouble.