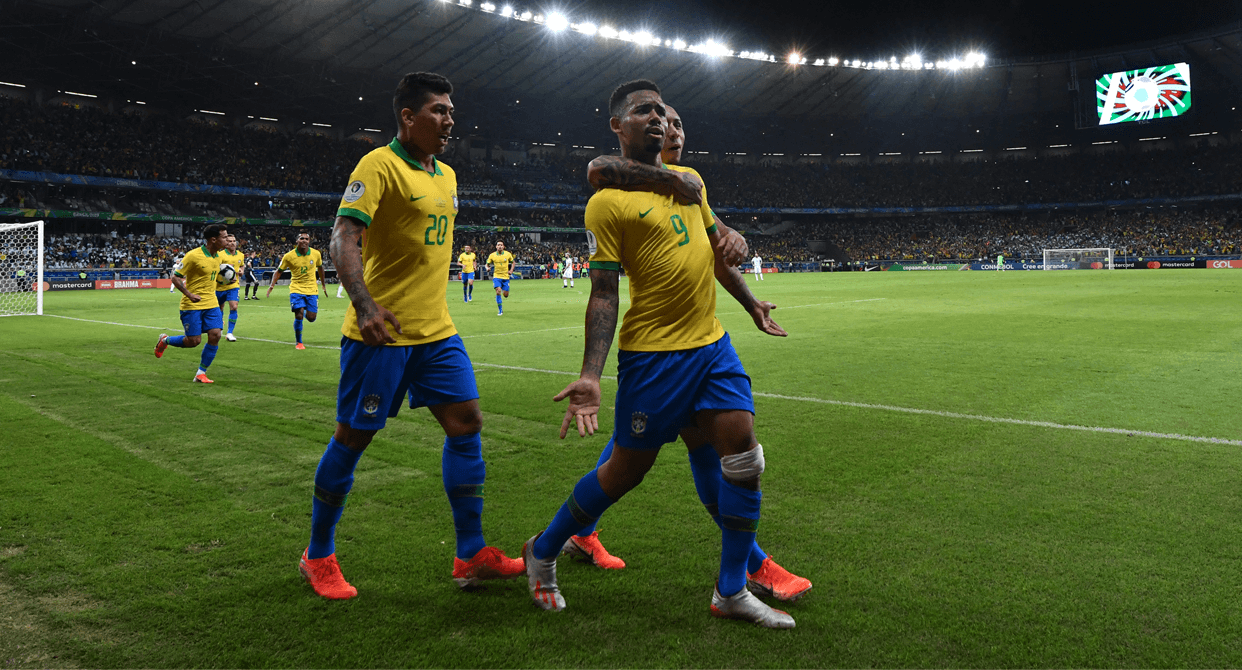 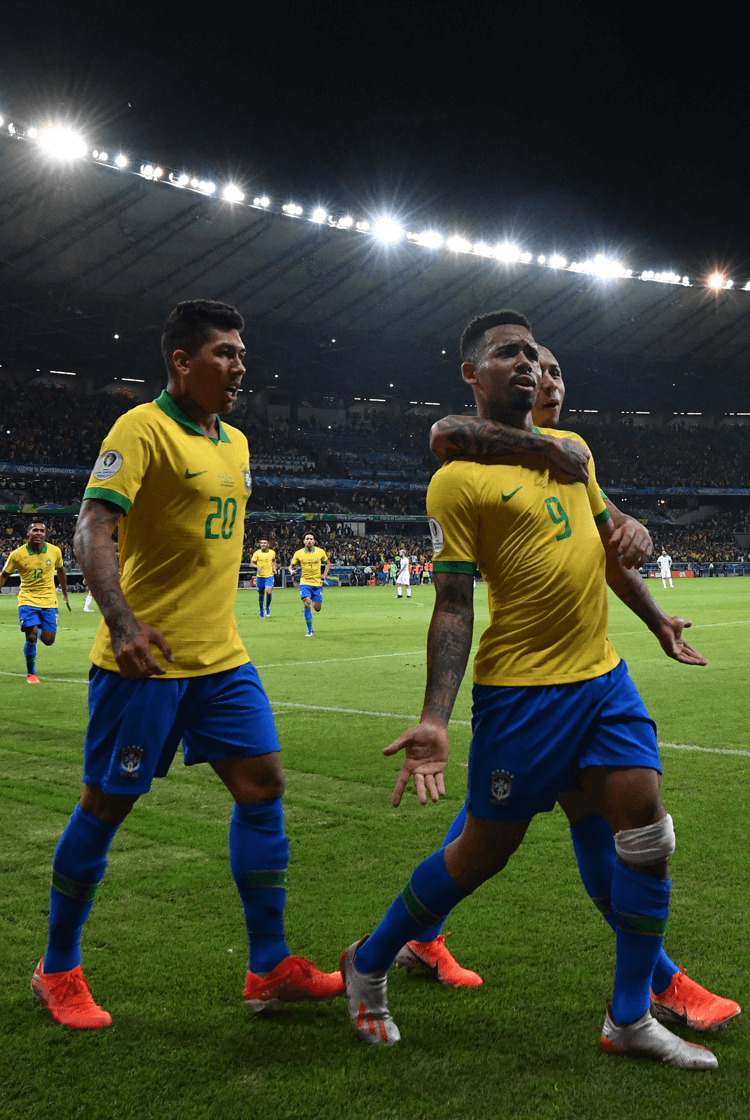 Brazil progressed to the Copa America final, where they will face Peru, after a 2-0 semi-final victory over long-term rivals Argentina at the Mineirao Stadium in Belo Horizonte. Extending an unbeaten run against them in major competitions that began in 2005, goals came in either half from Gabriel Jesus and Roberto Firmino. Argentina struck the woodwork through both Sergio Aguero and Lionel Messi, but were unable to break through at the same venue where Brazil memorably lost 7-1 to Germany at the semi-final stage of the 2014 World Cup. 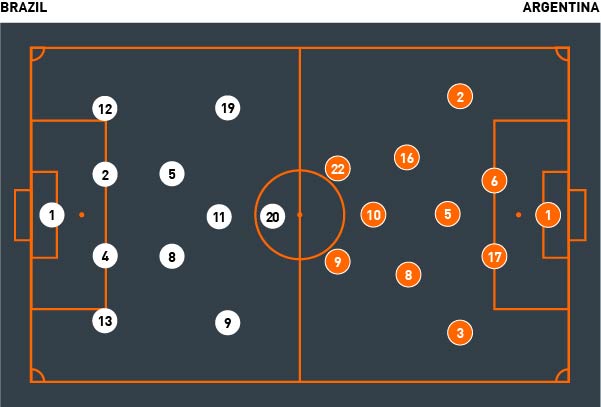 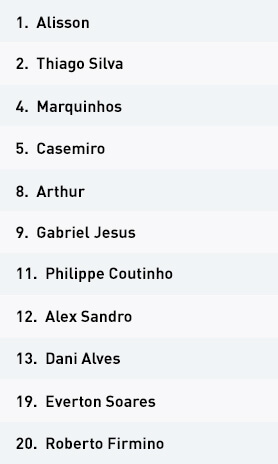 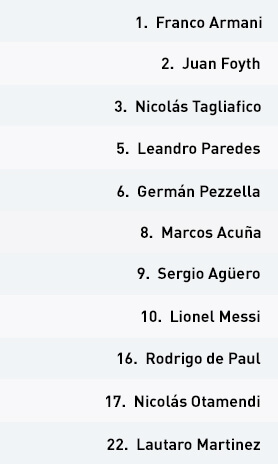 Brazil started in a 4-2-3-1 formation, with Gabriel Jesus, Philippe Coutinho and Everton Soares supporting central striker Roberto Firmino. The two withdrawn midfielders, Casemiro and Arthur, largely worked off different lines. Casemiro shielded the defence, while Arthur adopted more advanced positions in what at times looked more like a 4-1-4-1. Arthur and Coutinho also dropped into deeper areas to contribute when they required an extra number to bypass the first line of Argentina’s block.

With Casemiro, Arthur and the back four all used to contain Lionel Messi, Sergio Aguero and Lautaro Martinez, Brazil were often left severely underloaded in the attacking half, and as such they struggled to create. Jesus and Everton had little possession because of the attentions of full-backs Nicolás Tagliafico and Juan Foyth, who dropped and moved with Brazil’s wide attackers to limit their time and space.

The Seleção therefore gradually used Dani Alves further forward, to free up Jesus to operate more centrally. As Argentina made attacking changes, they were also increasingly able to find Coutinho in the growing spaces between the lines. Brazil’s main threat, and therefore both goals, came in transitional moments, however; the first following a period of uncertainty in midfield and the second after Argentina had had possession in advanced areas.

When they progressed to a 4-1-4-1, and allowed Argentinian central defenders Nicolas Otamendi and German Pezzella possession to instead focus on the threat posed in midfield, they also had an increased emphasis on stopping Messi.

If Messi dropped towards the ball, Arthur and Coutinho pressed him on each shoulder to prevent him from turning and to screen passes to Marcos Acuna or Rodrigo De Paul. Everton and Jesus also tucked in to reduce his chances of playing first time around the corner, as Brazil contended with Argentina’s movements between the lines and attempts to create overloads against Casemiro.

Marquinhos dropped to follow Martinez and Aguero, but Thiago Silva was less willing to do so, meaning the protection provided made Argentina less threatening between the lines because of the line of defence that was still in place. That was strengthened by Alisson’s willingness to play on the front foot and sweep up passes played in behind.

Out of possession, Argentina adopted a 4-3-3 shape led by a front line of Lionel Messi, Sergio Aguero and Lautaro Martinez in front of midfielders Marcos Acuna, Rodrigo De Paul and Leandro Paredes. They applied minimal pressure to Brazil’s defence and instead used their front three in a narrow line to restrict play through central areas. When that forced possession wide, the outside central midfielder – Acuna or De Paul – would press Brazil’s full-back when they received possession. Philippe Coutinho’s movement between the lines often occupied De Paul in his attempts to both screen the playmaker and stay tight with his midfield – a hesitation that created opportunities for their opponents.

The 4-3-3 formation became a 4-1-3-2 while Argentina were in possession; Paredes shielded the defence behind the midfield three of Acuna, Messi and De Paul, with Aguero and Martinez operating as a front two. They were also initially very direct, playing long from goalkeeper Franco Armani and looking for second balls, until their lack of success encouraged them to play shorter. Central defenders Nicolas Otamendi and German Pezzella then led the build with Paredes, who assumed positions in front of or between the back four to create a wider base of support in possession and allow the full-backs to push further upfield and attempt to stretch Brazil and create space inside.

Their rivals’ compact structure between the lines limited their space to play, once again making Messi their best hope of creating. When Argentina then realised Brazil’s attentions were on Messi to such an extent that gaps were opening elsewhere, Acuna and De Paul advanced to operate between the lines, where Aguero and Martinez also dropped to to tempt central defenders Thiago Silva and Marquinhos to follow them.

Messi simultaneously occupying Arthur and Coutinho meant that their options between the lines overloaded Casemiro and moved possession beyond Brazil’s midfield. The full-back closest to the ball would also look to advance, discouraging Brazil from moving inside to counter the threats posed by Acuna and De Paul. Messi also bounced the ball to create the return pass and potentially the space that came with attempts to pressure him. Angel Di Maria’s introduction as a 59th-minute substitute provided an increased threat in behind, but they still struggled to open up the last line of Brazil’s defence and ultimately exited the competition without beating Alisson in their opponents’ goal.