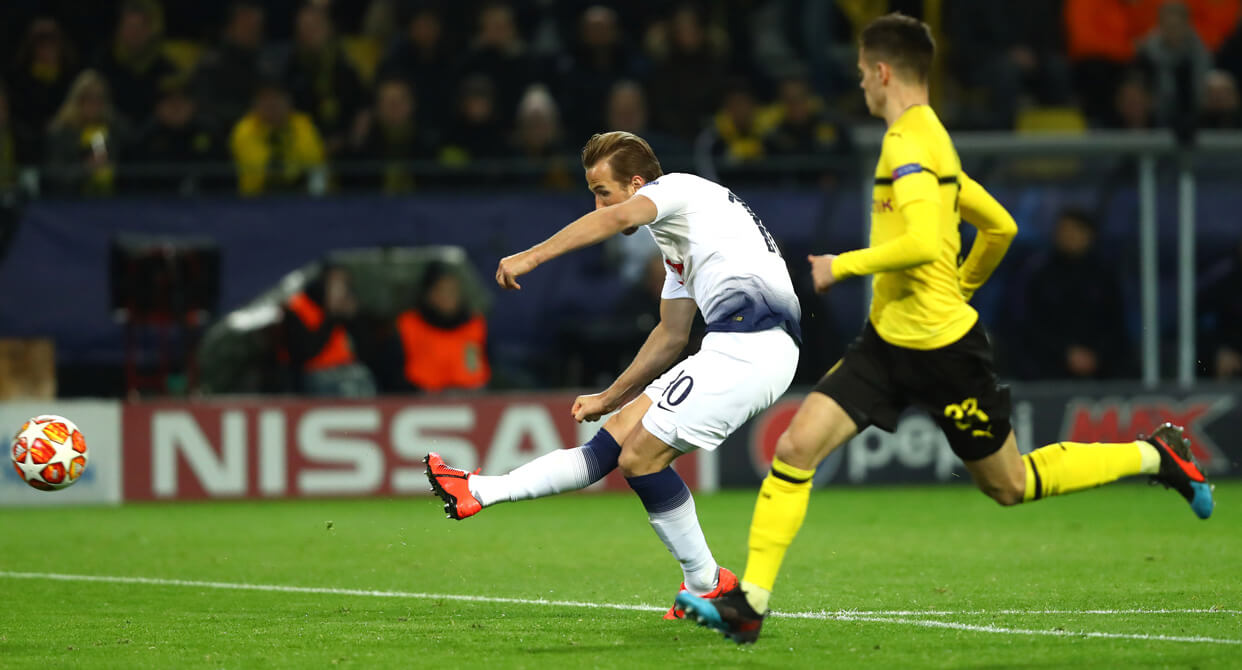 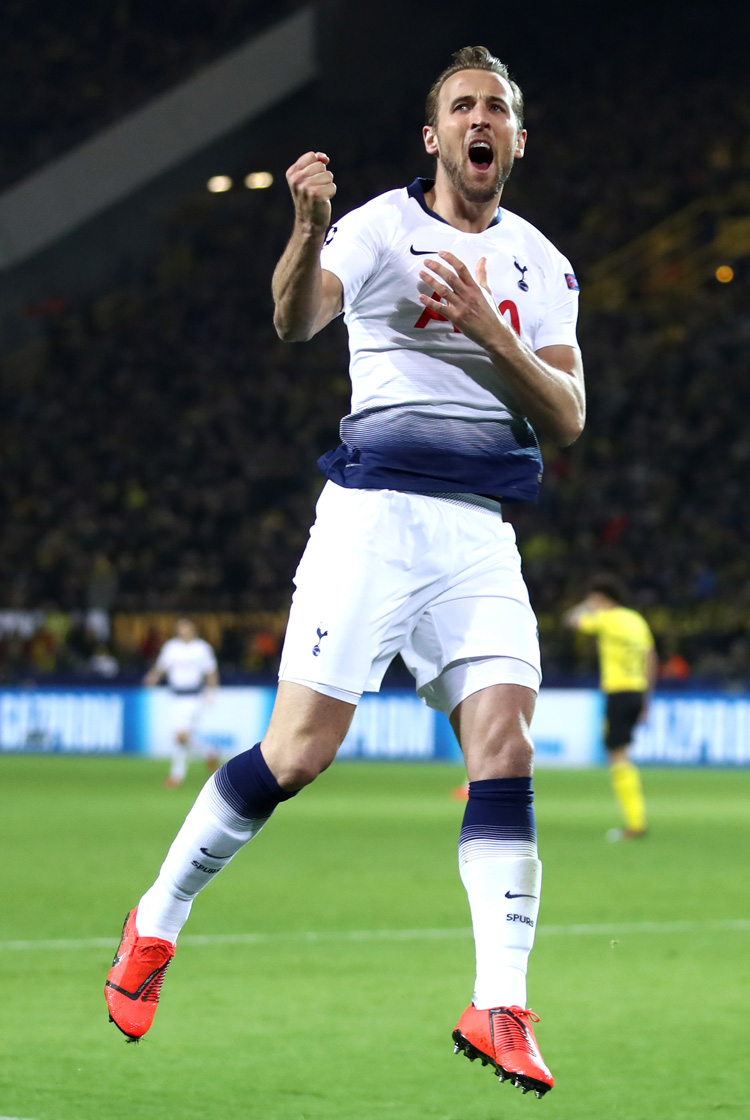 Tottenham moved into the last eight of the European Cup/Champions League for only the third time in their history on a night when Harry Kane became their highest goalscorer in European competitions. The England captain scored the only goal of the game early in the second half of this second-leg clash against Borussia Dortmund, collecting a pass from the impressive Moussa Sissoko before crashing an unequivocal finish past Roman Burki in the hosts’ goal. Dortmund had dominated the first half, but found the Tottenham defence and Hugo Lloris in resolute mood – and once they fell behind on the night the tie was effectively over. Mauricio Pochettino can now celebrate taking Spurs into the quarter finals for the first time, on a night when holders Real Madrid crashed out at home to Ajax. 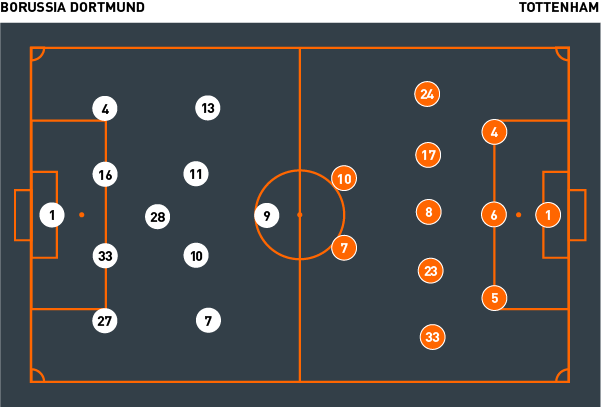 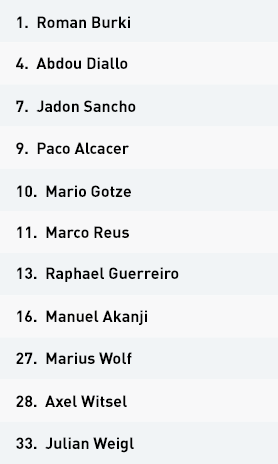 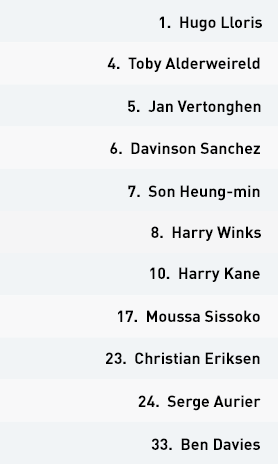 Dortmund had a significant amount of possession throughout the game – 65 per cent across the 90 minutes – but had to break down an organised and compact Tottenham block. They regularly circulated the ball among their back four and at speed, in order to drag Spurs’ midfield three across the pitch and increase the gaps between or around them.

Passes into full-backs Abdou Diallo and Marius Wolf triggered the forward actions in the next phase of the Dortmund attack. If Tottenham’s outside central midfielders pressed their full-backs, Gotze or Reus would drop into the half-space to receive – where they were often tracked by outside centre-backs Jan Vertonghen or Toby Alderweireld. If wing-backs Serge Aurier or Ben Davies moved out to press their opposite full-backs, then one of the two attacking midfielders on that side would make a run into the space left in behind.

The hosts also looked to drop Gotze towards the ball in the half-spaces and in front of the Tottenham midfield, to draw out whichever midfielder was in that area and create an overload opportunity for Wolf and Sancho against Davies on the Dortmund right. As they progressed in the wide areas and in behind the Spurs wing-backs, they would look to cross – most commonly to the edge of the box for late runners from midfield. However, Tottenham managed to get bodies in the way of most of the resulting shots – and Hugo Lloris dealt with anything that beat them.

After 30 minutes, Dortmund found themselves up against a 5-4-1 rather than the original 5-3-2, and subsequently struggled to find gaps in the Tottenham midfield. They then looked to drift Gotze to the left, to try and create an overload with Reus, Guerreiro and Diallo against those on the Tottenham right. They had some success here, but the Spurs defence was mostly able to deal with the next phase of the attack fairly comfortably.

For the last 25 minutes, Dortmund switched to more of a 3-5-2 formation, with substitute Jacob Bruun Larsen joining Alcacer on the top line, Christian Pulisic coming on to play on the hosts’ right, and Sancho switching to the left. This gave them a man advantage in midfield, but Spurs just dropped deeper and dealt easily with crosses into a packed box – a strategy that was unlikely to earn Dortmund five goals in the final 25 minutes.

Out of possession, Dortmund looked to apply an aggressive press. When Tottenham played out from Lloris, Alcacer would press Davinson Sanchez and force the play towards one side. Behind him, Reus would lock on to Moussa Sissoko and try to prevent him from turning, while Gotze took care of Harry Winks and Witsel patrolled between the lines and looked to prevent Christian Eriksen in particular from playing into the feet of Harry Kane or Son Heung-min. Full-backs Wolf and Diallo would be on the front foot, ready to go and press Aurier and Davies if the ball went out to the wing-backs first time.

The Dortmund midfielders worked tirelessly in transition, to recover quickly and stifle any Spurs counter-attack. The issues they faced in possession were in terms of priority; several times, their attacking midfielders moved too early to press a pass that wouldn’t hurt them before the ball was played, thus opening up a more dangerous passing lane into a Tottenham player in an advanced area. This could be seen in the build-up to the goal they conceded, when Eriksen found himself free to receive in between the lines before the ball came back for Sissoko to play in goalscorer Harry Kane.

Mauricio Pochettino set Tottenham up in a 3-5-2 formation in possession, with Serge Aurier and Ben Davies as wing-backs outside a midfield trio of Christian Eriksen, Harry Winks and Moussa Sissoko, and Son Heung-min partnering Harry Kane in attack. The visitors had limited possession and only managed one shot on target throughout the game – although that was the Kane shot that gave them victory on the night and secured their passage into the last eight of the Champions League.

As the statistics suggest, Spurs approached the second leg with a clear game plan to restrict space and deny Dortmund opportunities to play through them. As a result, their in-possession strategy was mainly limited to counter-attacks, where Sissoko in particular used his strength to surge forwards with the ball in transition.

When Tottenham did try to build up, they would often look to drop Son towards the ball on the outside of Axel Witsel, who would usually be more preoccupied with Eriksen. This was actually reversed in the build-up to Kane’s goal, when Witsel moved towards Son and left Eriksen free to receive between the lines, from where the ball found its way to Sissoko. From there, the Frenchman played the England captain in for the winner on the night.


Out of possession, Spurs initially set up in a 5-3-2 formation, with Davies and Aurier tucking in alongside centre-backs Toby Alderweireld, Davinson Sanchez and Jan Vertonghen. Son and Kane would stay close together out of possession and apply only very mild pressure on Dortmund centre-backs Julian Weigl and Manuel Akanji. Instead, they were more concerned with ensuring that Witsel couldn’t receive the ball to feet and conduct the attacks.

The midfield three of Eriksen, Winks and Sissoko tried to stay compact, but initially had to cover the entire width of the pitch, with the outside central midfielders responsible for pressing the Dortmund full-backs in wide areas. They spent lots of time in a low block, with limited distance between the defensive and midfield lines allowing little space for Dortmund to play through.

After 30 minutes, however, they switched to a 5-4-1 out of possession, with Son on the left and Eriksen on the right. This gave Dortmund a real problem in trying to break Spurs down, as the midfield four were able to shuffle across with more ease and with less ground to cover than when it had been a three. This also allowed for easier pressure in wide areas, where wing-back and wide midfielder were both able to go and engage without leaving too much space inside. This restricted Dortmund’s threat significantly in the second half, as Tottenham saw the game out with impressive ease.