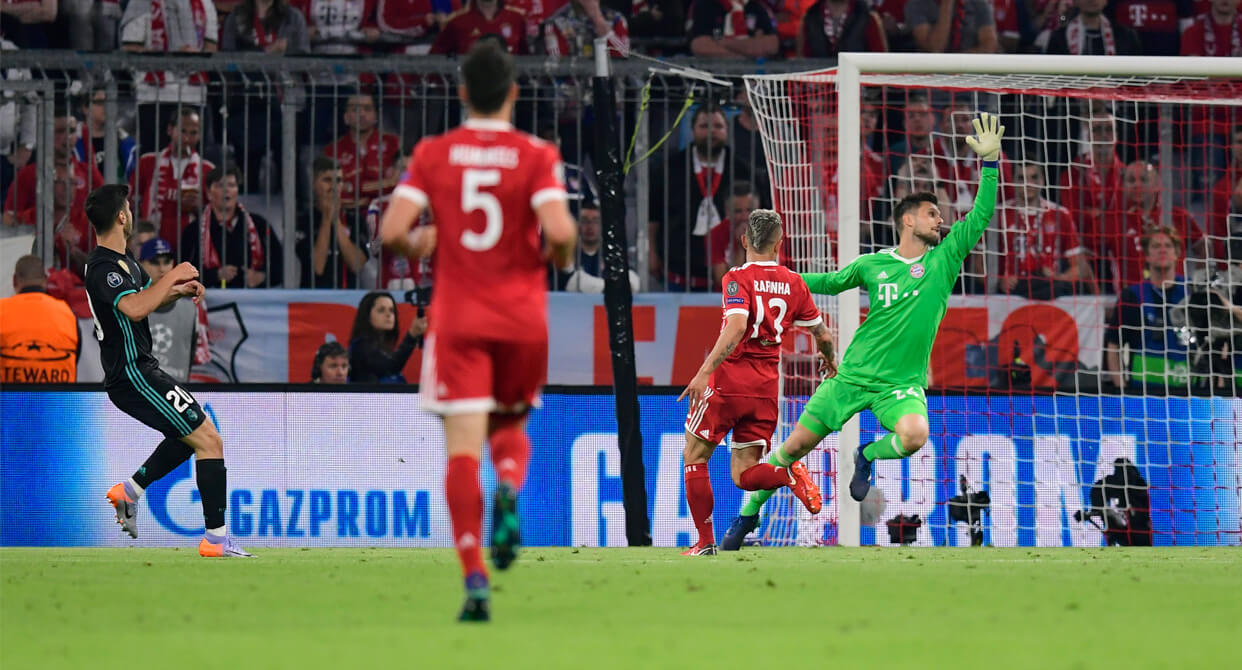 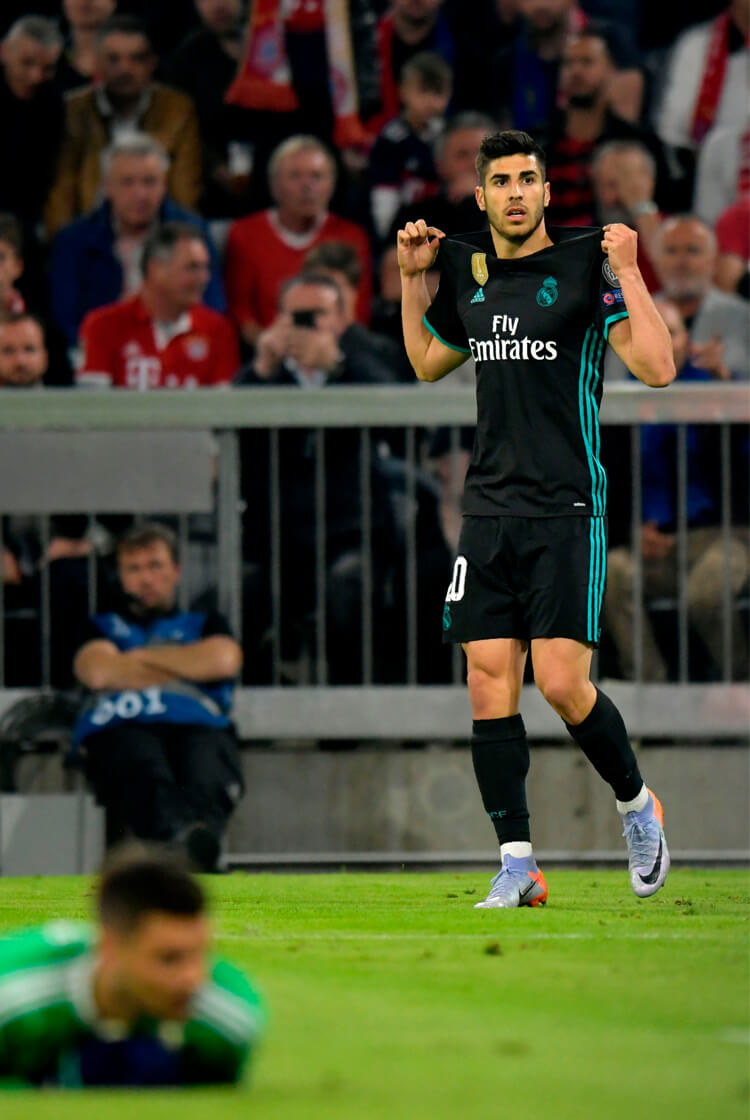 Real Madrid took control of their Champions League semi final with two away goals in a 2-1 victory over Bayern Munich at the Allianz Arena. Joshua Kimmich had given the hosts the lead in the 28th minute, but Marcelo responded with a powerful half-volley on half-time before Marco Asensio capitalised on an error from Rafinha by clipping the ball over Sven Ulreich at the end of a stinging counter-attack in the 57th minute. Zinedine Zidane's men are hoping to reach – and win – a third consecutive final in the competition, and will feel confident ahead of the second leg at the Santiago Bernabeu. Bayern will need to score at least two to deny their opponents a place in Kiev. Here, our professional coaches analyse the tactics and key moments from Los Blancos' win – and assess what went wrong for Jupp Heynckes and Bayern. 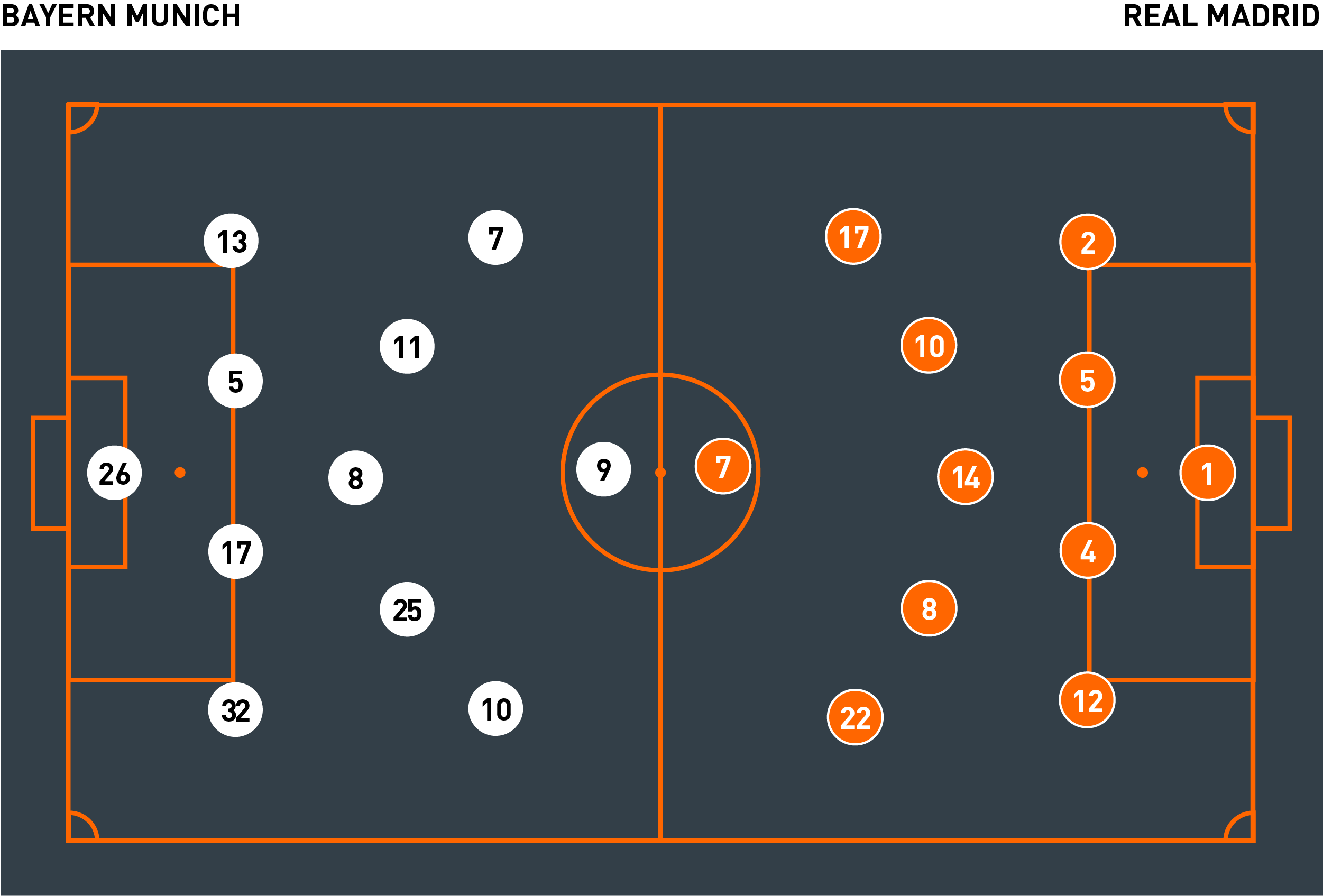 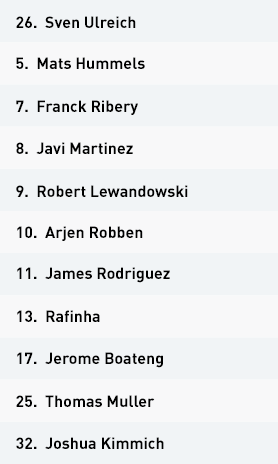 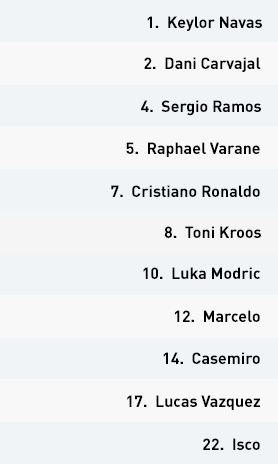 Bayern Munich set up in a 4-1-4-1 shape. Early injuries to Arjen Robben and Jerome Boateng, who were replaced by Thiago and Niklas Sule respectively, caused a few issues – but their formation remained unchanged throughout the game.

Despite Real Madrid beginning with an attacking mindset, it was Bayern who enjoyed most of the opening possession. Good early movements from Thiago created forward passing lines from the back line into advanced attacking players, and the space he created enabled Mats Hummels to split Real’s midfield by driving out of defence.

As Real grew into the match, Bayern took a more transitional approach. They encouraged Real’s left-back Marcelo to attack high up the pitch and then exploited the space he left behind. It was this exact method that resulted in their opening goal, when Kimmich overlapped on the right side, latching on to a through ball. Forward runs from Thomas Muller and James Rodriguez had drawn the defenders away from Kimmich, and the full-back guided a swerving shot to take Keylor Navas by surprise and open the scoring.

They failed to take this lead into the break, however. Minutes before half-time, the advancing Marcelo buried a low drive into the bottom corner. Bayern had gone from reasonable control of the tie to conceding a crucial away goal in the blink of an eye.

They had the majority of possession throughout the second half, with Real gradually reducing the aggressiveness of their pressing approach. However, a mistake from Rafinha set up an incisive counter-attack and gifted the visitors a second goal. Marco Asensio, who had replaced Isco at half-time, struck a first-time drive that flew past Sven Ulreich.

Bayern immediately reacted, with Muller and Rodriguez moving infield as central attacking midfielders. Thiago, meanwhile, dropped deeper alongside Javi Martinez, forming a midfield box. Their best attacking outlet remained Ribery on the left, with Rafinha overlapping at pace. The latter’s running drew away at least one of Real’s defenders, as they looked to double-mark Ribery. From this, the Frenchman was able to cut inside and directly test the Madrid goalkeeper.

Despite multiple good attempts on goal, Ribery and Bayern couldn’t break through the Real defence. The tie sits firmly in the hands of the reigning European champions, who are looking to reach a third consecutive Champions League final.

In similar fashion to the home side, Real Madrid began in a 4-1-4-1 structure. Cristiano Ronaldo started as the lone striker, with Isco looking to roam and drift from the left side. The width in attack was supplied from both full-backs, Marcelo and Dani Carvajal.

Real’s best attacking efforts came through early counter-attacks. They often encouraged Bayern to build with shorter passes, shadowing and screening as they travelled up the pitch. This provided space in behind Bayern’s back line for Real to transition into. As soon as the ball was turned over, Ronaldo drifted out to the left side, thereby enabling the Portugal forward to receive in space and drive towards goal on the angle.

Real had mixed success from transitions and gradually began to enjoy more possession as the half went on. Despite going a goal down, they continued to attack with both full-backs high up the pitch – who combined, albeit fortuitously, for the equalising goal.

Carvajal moved down the right and swung in a deep cross looking for the aerial threat of Ronaldo. His overhit delivery landed perfectly for Marcelo to strike a first-time shot on the half-volley, which arrowed into the bottom corner to make it 1-1.

Despite having little attacking possession in the second half, Real still created good chances. Marco Asensio was introduced at half-time, which added extra pace and directness to their attacking transitions. And, in the 57th minute, he pounced on a poor mistake from Rafinha and set free Lucas Vazquez. As Vazquez drove deep into Bayern’s half, he squared the ball back to the onrushing Asensio, who powered home past Sven Ulreich to put Real ahead.

Asensio and Ronaldo had further chances on the counter-attack, but Real converted into a deep block with 30 minutes remaining. They condensed their defensive half with heavy numbers around the ball, and worked tirelessly to block shots and defend crosses. When a Bayern player looked to cut in from wide areas, they double-marked, ensuring minimal shots were taken on goal.

Real expertly held out Bayern, who couldn’t break down their congested block. The 12-time champions take a 2-1 lead to the Santiago Bernabeu, and with two away goals are in pole position to reach a record 16th final.

The key battle was on Real Madrid’s left side. Dani Carvajal and Marcelo, Real’s full-backs, advanced high up the pitch, providing consistent attacking width. As they moved forward, naturally they left space in behind for the home side to transition through – which Bayern soon capitalised on.

While they didn’t take advantage of this space in the opening stages, once Real started to dictate possession, Bayern pounced. They scored their one and only goal by utilising the space on the left side – which had been vacated by the overlapping Marcelo – as Joshua Kimmich rampaged down this flank on the transition. The young full-back latched on to a through ball and took Keylor Navas by surprise with a swerving strike.

Real’s defensive downfall became their attacking success. A cross intended for Cristiano Ronaldo found its way to Marcelo, and the Brazil international struck a powerful shot on the half-volley across goal, which flew into the bottom corner. This was the last real threat from the visitors’ full-backs, who remained within their defensive back line throughout the second half.

When Real took the lead after Marco Asensio had completed a blistering counter-attack following an error from Rafinha, Zinedine Zidane’s team dropped into a deep block, with heavy numbers pressing the ball in their defensive half. Bayern pushed to at least get back on level terms, but couldn’t break their opponents down.