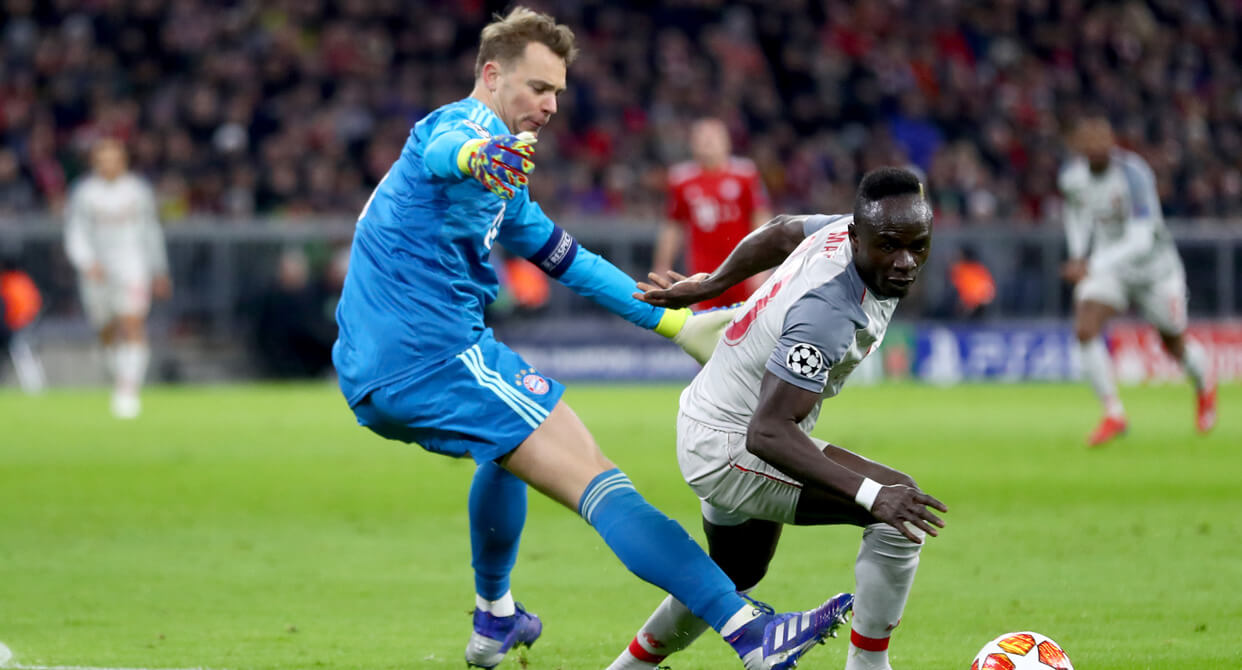 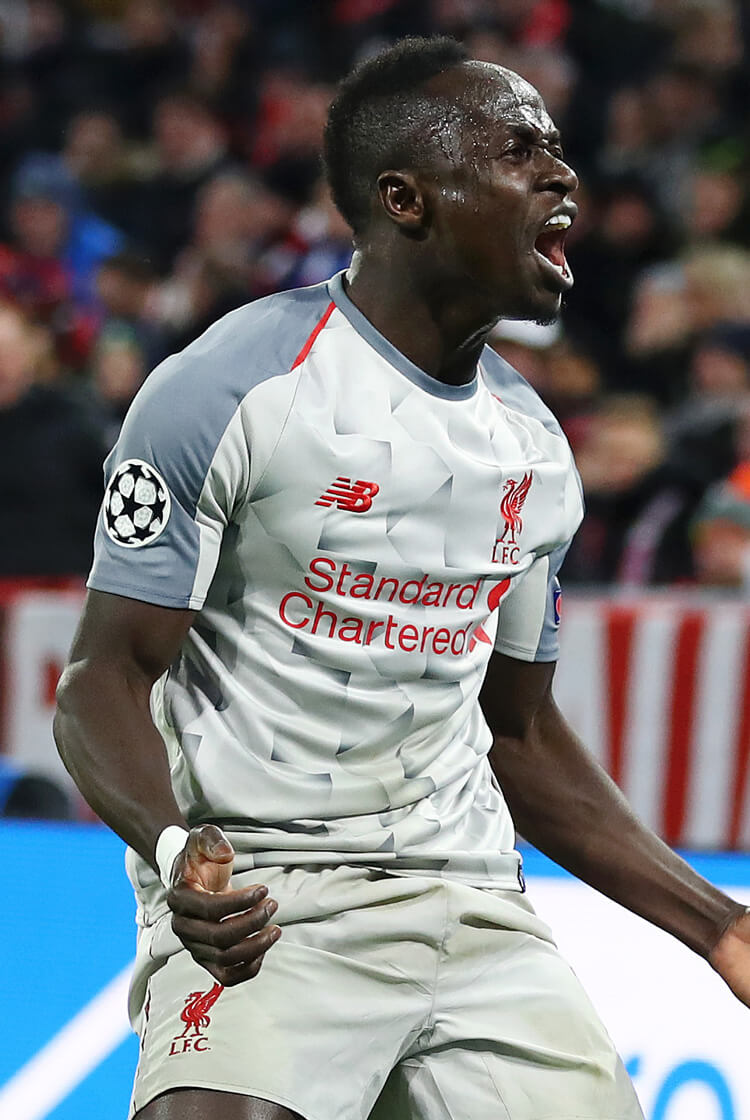 Liverpool moved into the last eight of the Champions League, on a night when Sadio Mane became their highest goalscorer away from home in the competition (including the European Cup). It didn't start quite so well for Jurgen Klopp's side though, with captain Jordan Henderson suffering an ankle injury that required him to make way for Fabinho as early as the 13th minute.

But any nerves were eased just over halfway through the opening period by Mane's superb opening goal. Controlling a long pass forward from Virgil van Dijk with a superb touch that took the ball away from Rafinha, Mane swivelled away from the advancing Manuel Neuer and finished coolly to put Liverpool ahead in the Allianz Arena. Bayern levelled seven minutes before the break courtesy of an own goal from Joel Matip, whose touch on a low cross from Serge Gnabry inadvertently put the ball beyond Alisson.

The second half saw Bayern continue to struggle against a compact, organised Liverpool side and in the 69th minute the game moved further from their grasp when Van Dijk leapt above Javi Martinez and Mats Hummels to head in from a James Milner cross. The closing action of the night came once again from the in-form Mane – now on 19 goals for the season – who got on the end of a wonderfully floated in ball from Mo Salah to ensure Liverpool joined their Premier League rivals in the quarter finals of the Champions League. 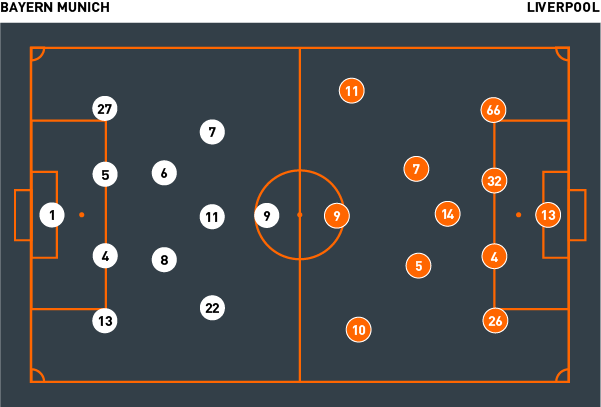 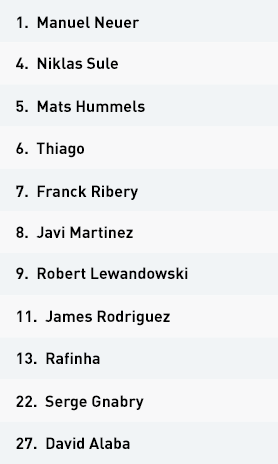 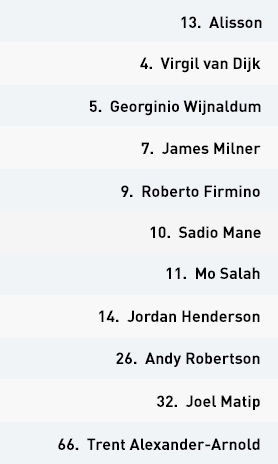 Bayern set up in a 4-2-3-1 formation with Javi Martinez and Thiago as the two deep central midfielders. Franck Ribery and Serge Gnabry provided the width either side of James Rodriguez who operated as the central attacking midfielder just behind centre-forward Robert Lewandowski. Bayern had two main areas that they tried to exploit: the wide areas and the spaces in behind, trying to send direct passes to Lewandowski or in behind for the runs of Gnabry.

The direct passes to Lewnandowski in the air were dealt with by Virgil van Dijk and Joel Matip, causing the Polish forward to drift to wider areas and deeper positions to try and receive to feet. The passes for Gnabry in behind tended to be from deep positions as seen in Bayern’s equalising goal.

Bayern had real difficulty in accessing the wide areas due to the positioning of Mo Salah and Sadio Mane in the press. As there was no direct access to the full-backs and the central midfielders were being occupied by Georginio Wijnaldum and James Milner, Bayern began using Gnabry and Ribery to drop from higher positions to give Mats Hummels and Niklas Sule a diagonal passing line that eliminated Liverpool’s attacking and midfield units.

As Gnabry and Ribery would be tracked by Trent Alexander-Arnold and Andy Robertson, they would then look to set the ball to full-backs Rafinha and David Alaba who would then be in a position to play forwards - this is how Bayern managed to access the wide areas. The issue that Bayern had once they had managed to secure possession in the wide areas was progressing to the next phase of the attack. The path back inside was often blocked by an industrious and compact Liverpool midfield who had worked back to ensure that Ribery/Gnabry/Kingsley Coman could not easily drive inside. Liverpool would also double up in the wide areas with either the outside midfielder or wide attacker joining the full-back to make crosses and combinations in wide areas more difficult. This is an area that Bayern failed to find a successful solution to resulting in the home side only managing two shots on target throughout the game.

Out of possession, Bayern operated with two strategies. The first was to press high in a 4-2-3-1 structure. Lewandowski would be positioned between the two centre-backs and look to close down the one that received the ball. Ribery would be positioned between Matip and Alexander-Arnold, looking to be able to affect both if necessary, Gnabry would be doing the same on the other side between Van Dijk and Robertson and Rodriguez would occupy Fabinho. Javi Martinez and Thiago would try to track James Milner and Wijnaldum where possible to make it difficult for Liverpool to play out.

When Liverpool used rotation in the wide areas by dropping Salah/Mane towards the ball and having Wijnaldum/Milner running in behind, Bayern would send the centre-back on that side out to deal with the penetrative runner, instead of Martinez or Thiago who would have started their tracking run after the Liverpool player. In this case, the midfielder would cover inside for the centre-back that had moved out.

When the high press wasn’t an option due to Liverpool having secure possession and Bayern’s distances being too far from the ball, they would form a 4-4-1-1 mid-block. Ribery and Gnabry tucked in with Javi Martinez and Thiago to form the line of four while Rodriguez operated in front of them and Lewandowski remained in front of Rodriguez. In these situations Bayern would try to maintain compactness between their units and deny Liverpool space. In the moments of transition, Bayern would look to find Rodriguez, who would have Lewandowski ahead of him and Gnabry and Ribery advancing either side to initiate a counter-attack.

Liverpool set up in a 4-3-3 formation with Jordan Henderson (replaced by Fabinho early due to injury), James Milner and Georginio Wijnaldum as the midfield three behind Sadio Mane, Roberto Firmino and Mo Salah in attack. Liverpool had limited time with the ball, but when they did manage to gain possession they would try to find their wide forwards and exploit these areas of the pitch. The dropping movements of Salah and Mane towards the ball would trigger runs in behind from Firmino, Milner or Wijnaldum as David Alaba and Rafinha would track the forwards deep. If Firmino was the one to drop in more then Salah and Mane would typically stay high. As the midfield was matched up 3v3, Liverpool tried to move Wijnaldum into a false full-back position to give Thiago a problem regarding whether to move out to press him and leave a larger gap inside that could be exploited, or to let him receive the ball and have the opportunity to play forwards. Often Thiago would leave Wijnaldum, meaning that Franck Ribery would move out to press him. This would then free up Trent Alexander-Arnold to receive the ball freely and continue the attack from there. Once the ball was out wide, Liverpool would try to use central runners to move on the blindside of defenders and try to receive in behind, as seen for Mane’s second goal.


Out of possession, Liverpool operated in the same 4-3-3 structure. Firmino would position himself between Mats Hummels and Niklas Sule, Mane between Hummels and Alaba and Salah between Sule and Rafinha - Mane and Salah later switched to opposite sides and traded responsibilities. James Milner and Wijnaldum would then pick up Thiago and Javi Martinez while Fabinho would try to stay between the two of them in a deeper position, both screening the ball into Robert Lewandowski’s feet and being in a position to affect James Rodriguez.

As the ball moved out to Hummels or Sule, Mane and Salah would press their outside shoulder and try to force them inside, using their cover shadow to block the passing line into Rafinha and Alaba and denying Bayern easy access to the wide areas. The Liverpool midfield three would remain very narrow and compact so that when Bayern had to play inside, they were able to apply high pressure to prevent Bayern from playing forward again.

When involved in the high press, Trent Alexander-Arnold and Robertson could be seen to push up between their wide attacker and opposing full-back when the ball was on their side, with the opposite full-back tucking in. In phases where Liverpool sat slightly deeper and didn’t utilise a high press, Milner or Wijnaldum would move out to press the full-backs should they manage to receive possession. The recoveries and back-tackling of the Liverpool midfield was a large reason for their success in limiting Bayern’s opportunities as any Bayern player that looked to receive inside would be placed under immediate pressure from front and back, making it very difficult for him to complete his next action.