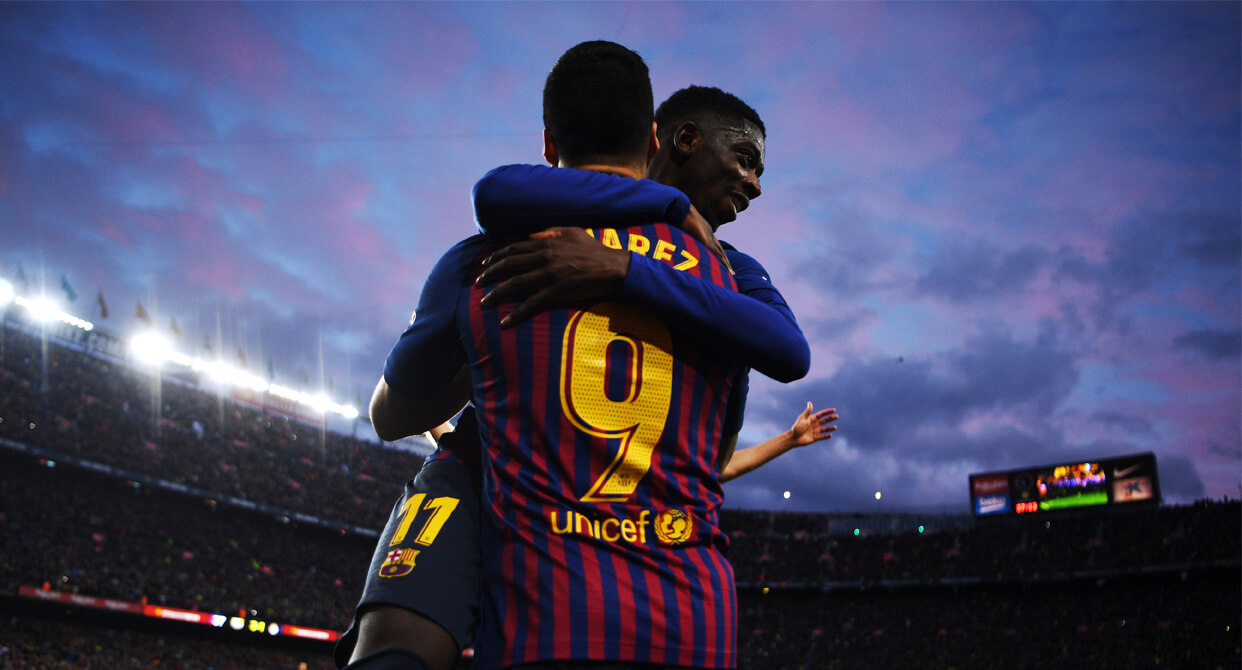 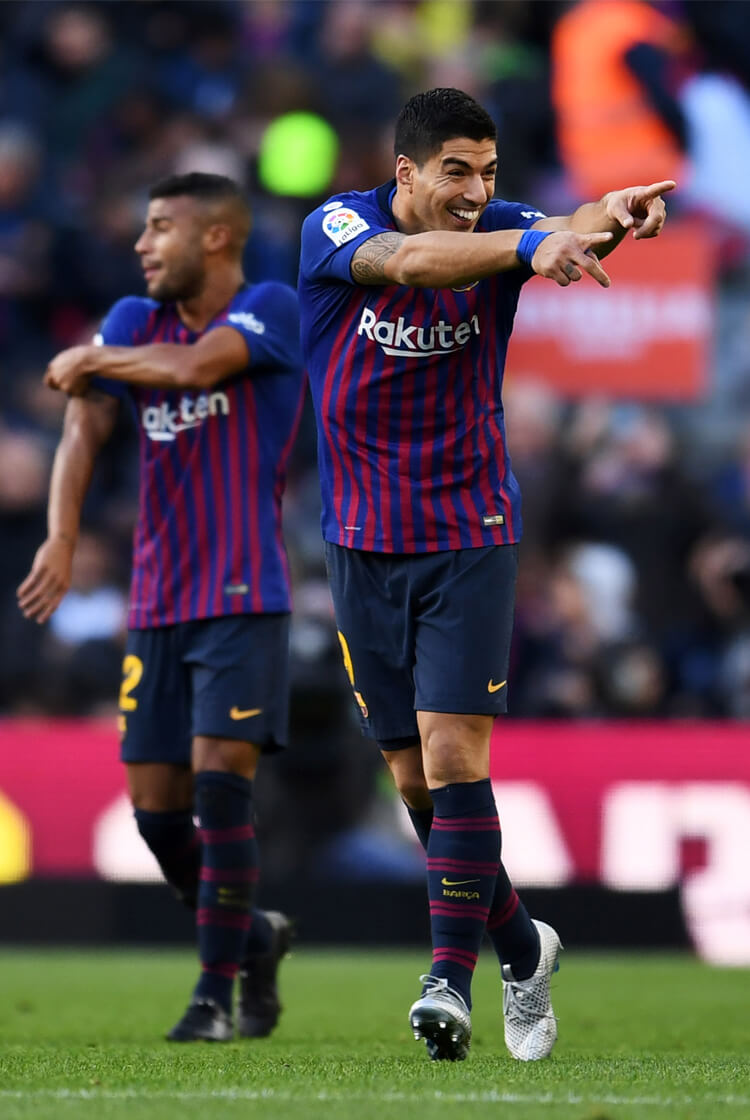 Luis Suarez hit a hat-trick as Barcelona thrashed fierce rivals Real Madrid at the Camp Nou in the first El Clasico of the season. The hosts took a two-goal lead into the break, with Philippe Coutinho slotting home in the 11th minute and Suarez converting from the penalty spot on the half-hour mark. Real improved at the start of the second half and grabbed one back through Marcelo, but Barca responded in style. They added three more goals to complete the thrashing, as Suarez completed his hat-trick and Arturo Vidal headed in a fifth late on. Real are now without a win in La Liga since the narrow victory over Espanyol in September, and reacted by sacking head coach Julen Lopetegui after just four months in charge. Barca, meanwhile, are back on top of table. 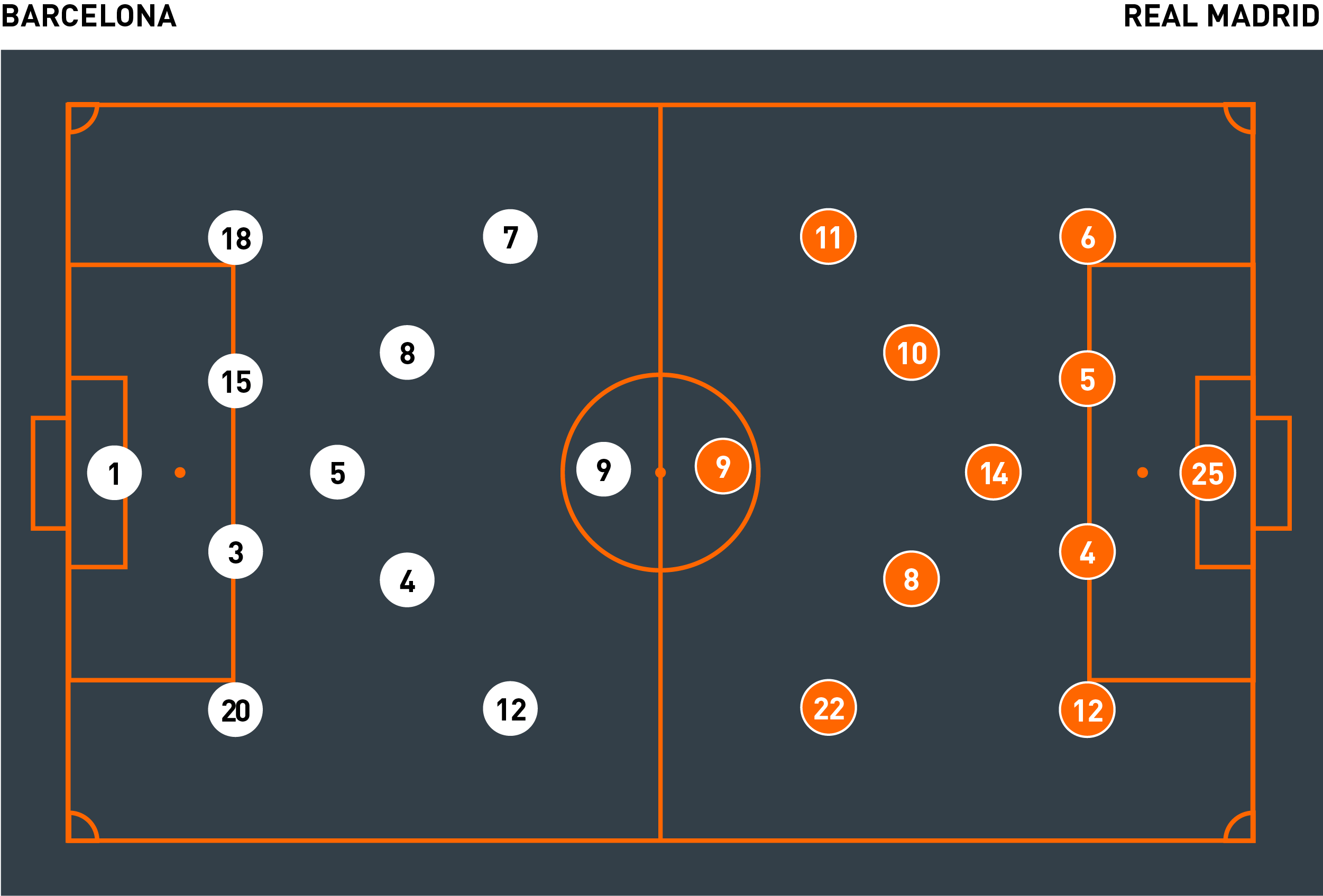 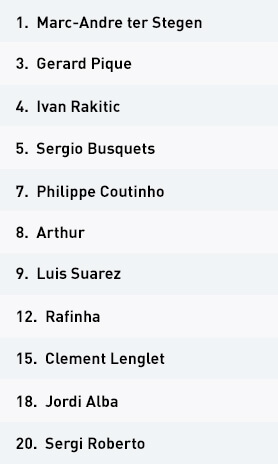 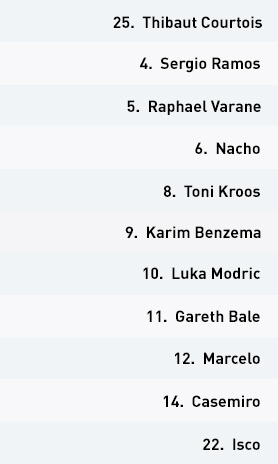 Barcelona set up in a 4-3-3 formation, with Sergio Busquets, Ivan Rakitic and Arthur as the midfield three behind Rafinha, Philippe Coutinho and Luis Suarez in attack.

Barca’s primary strategy in attack was to draw individuals from Real Madrid’s units towards the ball before exploiting the space they had vacated with a penetrative pass. The area behind Real right-back Nacho, where Jordi Alba would regularly make runs to get on the end of the penetrative pass, was frequently targeted – but this approach was not solely reliant on the movement of Alba. Arthur and Coutinho, the central midfielder and wide attacker on the Barca left, would make movements to attract Nacho and Gareth Bale – drawing their attention away from Alba, who could then make his runs.

Along with this strategy, the hosts would look to complete short passes in the centre of the pitch to entice the Real players into a more compact shape and closer to the ball, before looking to play the killer penetrative pass. Their other first-half strategy was to play in between their opponents’ lines to eliminate players from the block. This typically followed a familiar pattern whereby passes would be exchanged between the full-backs, centre-backs and central midfielders as the ball moved backwards – whether it be through an individual staying on the ball but facing his own goal, or a backwards pass.

This was often the trigger for one or more of the midfielders to move away from the ball and on to the blindside of his opposite number, who would often move towards the ball as it progressed. These blindside movements created passing lanes for the new forward-facing player on the ball to play through.

In the second half, Barca were restricted largely to counter-attacks, as Real gained more control of the game. The introduction of Ousmane Dembele for Coutinho in the last 20 minutes helped to increase the dynamism of these attacks – and the Frenchman played an integral role in the hosts’ killer third goal.

Ernesto Valverde’s team operated in a 4-1-3-2 shape out of possession. Arthur would join Suarez on the top line when pressing, while Coutinho and Rafinha would tuck in alongside Ivan Rakitic to form the next line of three ahead of Sergio Busquets. Occasionally, in high-pressing situations, Busquets would push higher to form a line of four.

If Barca chose not to press, they would operate in a mid-block that would take on more of a 4-4-1-1/4-1-4-1 shape. The idea out of possession was to commit numbers around the ball and cut off as many short passing options as possible, forcing Real into wide areas. When the ball went wide, the full-back on that side would be joined by the near-side midfielder (either the nearest central midfielder or wide attacker) to keep the Real player on the ball out by the touchline and prevent him from progressing down the line, or from moving or playing inside.

When Real switched formation to a 3-4-3 in the second half, Barcelona found this much more difficult to deal with because of the numbers their opponents had centrally as well as the threat outside. Despite this, and despite the visitors coming close to equalising at 2-1 down, the hosts only conceded once and eventually ran out easy winners.

Real Madrid set up in a 4-3-3 in the first half, with Casemiro, Luka Modric and Toni Kroos in midfield behind Gareth Bale, Isco and Karim Benzema in attack.

Real would look to try to get Isco, who was free to roam across the pitch, on the ball as much as possible – but the Spaniard struggled to create anything of note, and this was a major factor in their struggle in possession in the first half. Their only real entries into the final third came through direct passes behind the defence that ultimately came to nothing.

The switch in formation to a 3-4-3 for the second half completely changed the game, with Julen Lopetegui replacing centre-back Raphael Varane with Lucas Vazquez at the break. Nacho, Casemiro and Sergio Ramos sat as the back three; Vazquez and Marcelo played as the wide players; Kroos and Modric sat in the middle; and Isco, Bale and Benzema remained up top. The key difference was that Bale and Isco could play inside more, but the width was still maintained through what were now the wing-backs. The back three also offered an element of security behind the ball.

The goal that halved the deficit came as a direct result of this switch, as Real suddenly had players positioned all over the pitch but in areas where they could advance the attack. Vazquez, in a wide position, played a pass in behind the Barcelona defence to Isco, who had made a diagonal run from inside, to receive the ball and cross for Marcelo to finish.

Barca now struggled to maintain numbers around the ball and still cover enough of the pitch to nullify the visitors. Real created several more chances in the second half, as a result, and should have added to their total. With the new positional structure, they were able to play inside to their midfielders and then outside to their full-backs – essentially operating a similar strategy to that which had worked so well for Barcelona in the first half.

Out of possession, though, Real were messy. The structure was a 4-1-4-1 for the most part, although this changed to a 5-2-3/4-3-3 depending on how far back the full-backs worked. The issue was in closing players down; it appeared to be more a case of running after the ball than pressing with intelligence. Barca regularly evaded the press with simple passes that could eliminate several players.

Real often played with Isco, Modric and Bale very close to Benzema, and in a relatively flat horizontal line. With this, the issue was that Rafinha would regularly drop into the space that Isco would be picking up as the out-of-possession midfielder on that side. Marcelo couldn’t track Rafinha, as that would have left Luis Suarez free in the space he had vacated. Consequently, Kroos had to move across to deal with Rafinha – and this left more space in the centre. As soon as the ball passed by the line of Modric, Bale and Isco, Barca were in a highly advantageous position with the ball.

Real kept pressing aggressively in the second half, as best as possible – especially from goal-kicks, where they would take up a very attacking stance and force Barca to go long. Towards the end of the game, however, they were caught out with two quick goals that came from players pressing very high and leaving large spaces through which the visitors could play and attack with speed. The final scoreline, as a result, looked much worse than the actual balance of play would have suggested.