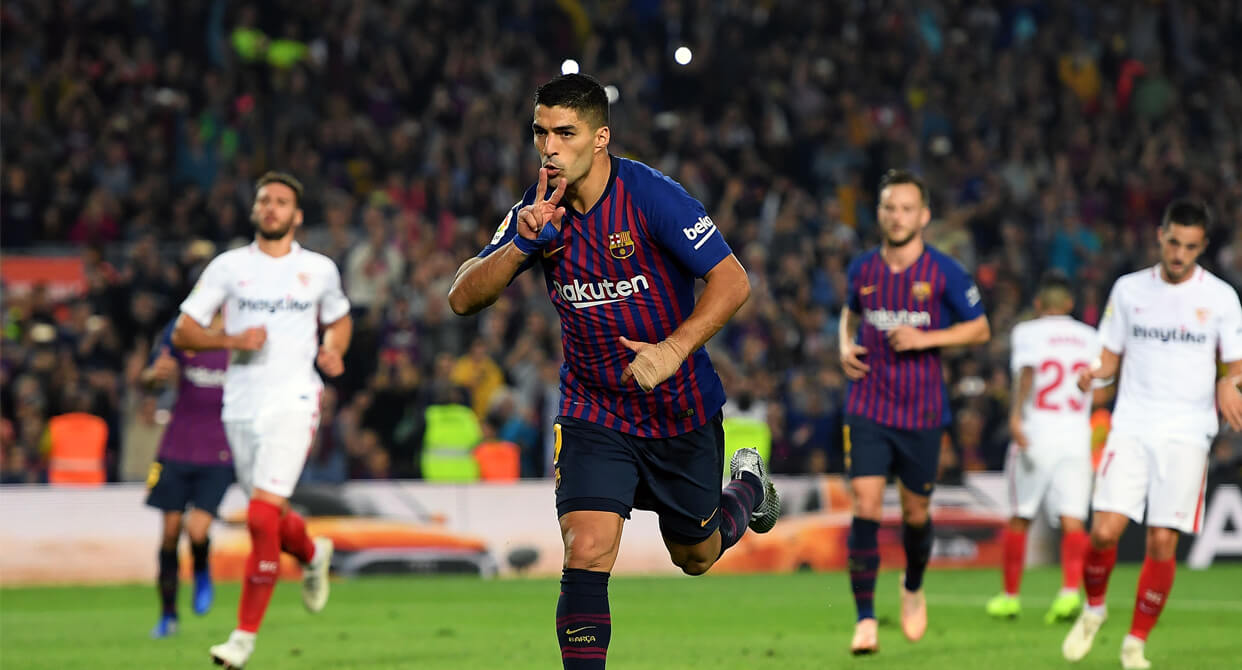 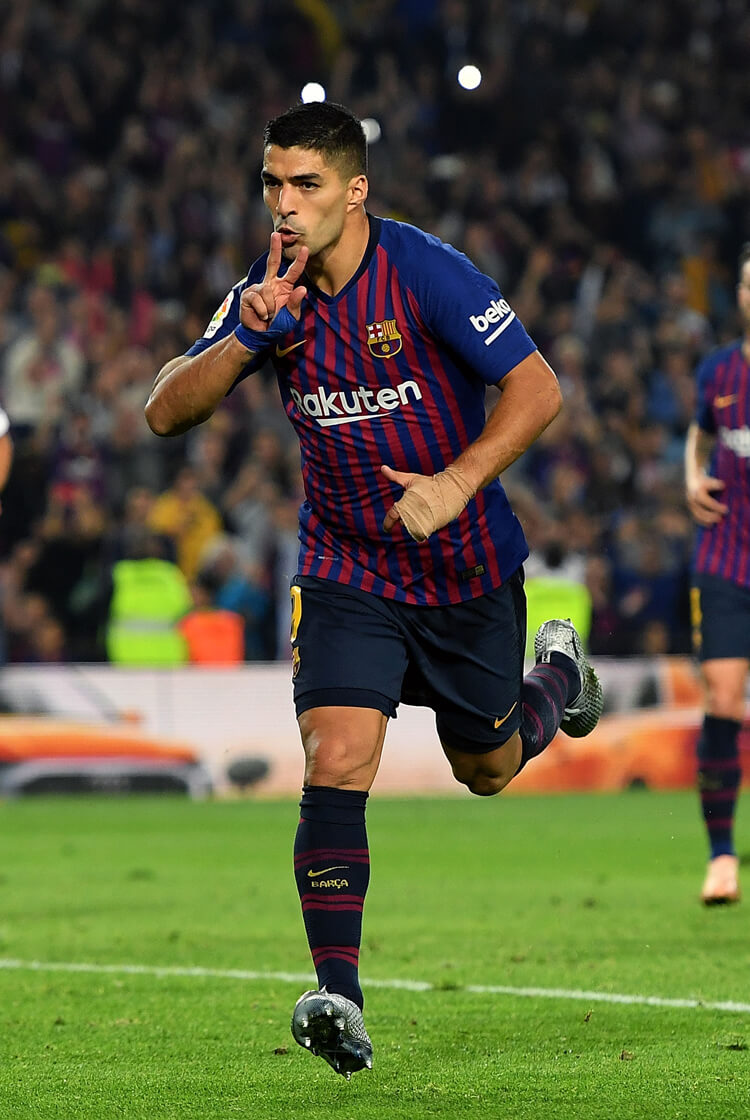 Barcelona returned to the top of La Liga, with victory over early-season title rivals Sevilla ending a winless run of league form. Ernesto Valverde’s team had drawn three and lost one since beating Real Sociedad in September, but Lionel Messi set up Philippe Coutinho for the opening goal in the second minute and doubled his team’s advantage soon after. The Argentine captain left the field soon after, with the fractured arm that will keep him out for a number of key games – but the damage had already been done, and second-half goals from Luis Suarez and Ivan Rakitic wrapped up the win. Late strikes from Pablo Sarabia, which deflected off Barca defender Clement Lenglet, and Luis Muriel proved little more than consolation for the visitors. 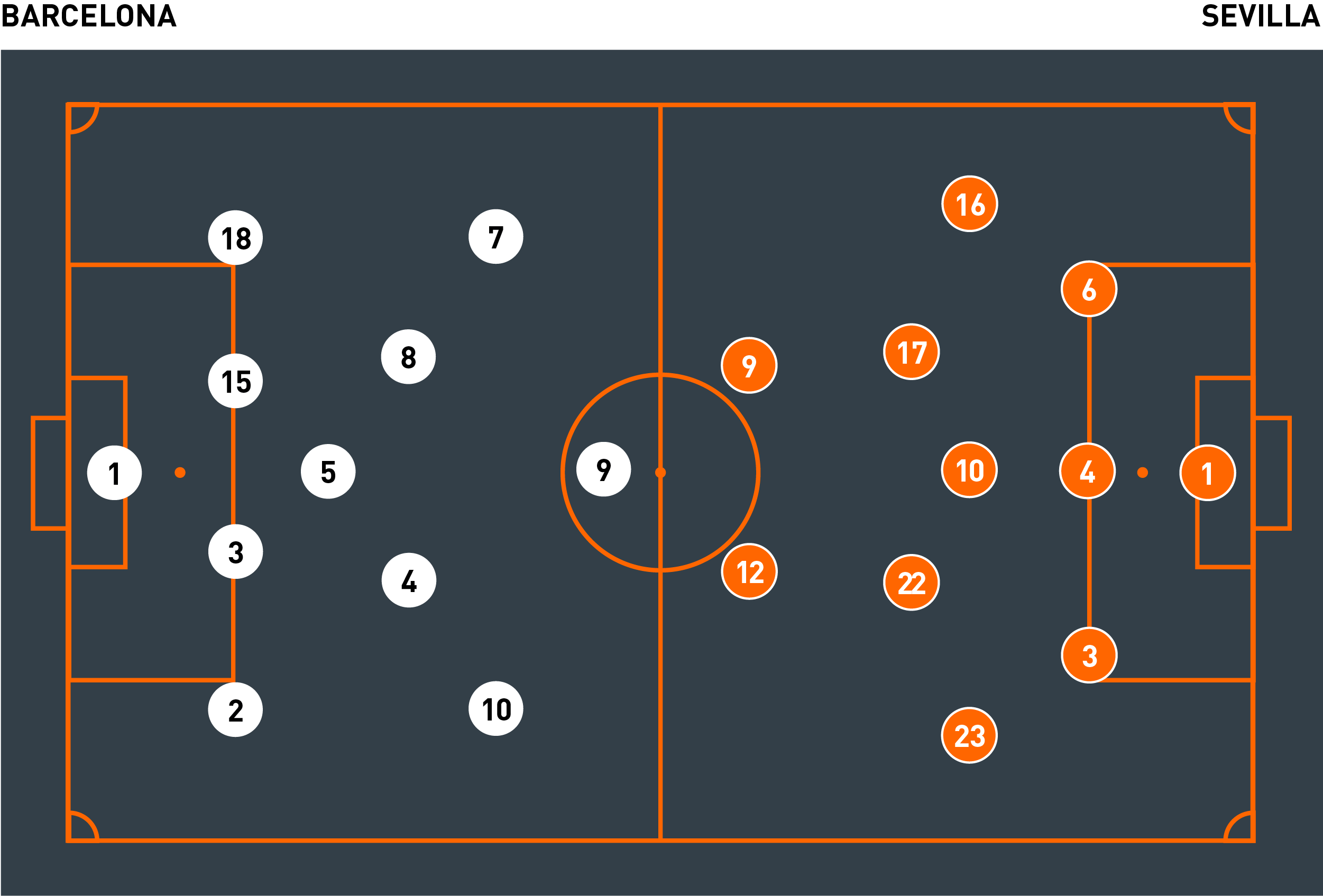 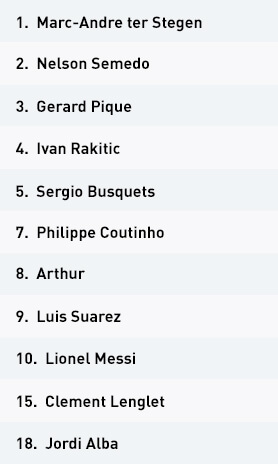 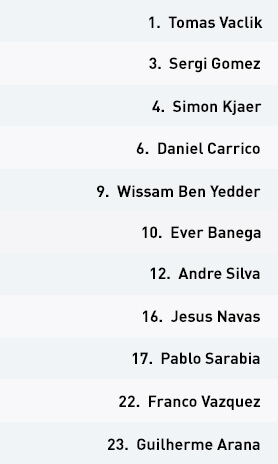 Barcelona set up in their familiar 4-3-3 formation, with Sergio Busquets, Ivan Rakitic and Arthur in midfield, supporting Lionel Messi, Luis Suarez and Philippe Coutinho in attack.

Barca tried to dominate possession and penetrate through Sevilla from the outset, particularly in the half-spaces. On the right-hand side, full-back Nelson Semedo would push high while Messi would drop inside into a deeper position. Rakitic would be pressed by Franco Vazquez when he received the ball, which would leave Messi and Semedo in a two-on-one against left wing-back Guilherme Arana. When Messi dropped into a deeper position and the ball was travelling towards him, one or both Barca full-backs would set out to make penetrating runs in behind the Sevilla defence. Messi would then look to play over the top to them.

After Messi was replaced by Ousmane Dembele midway through the first half, Barca lost control of the game and their quality in attack dropped. Coutinho’s importance in dictating their build grew, with the Brazilian now becoming the player to drop deeper and roam with more freedom.

Barca had to play with patience, but still looked to utilise the half-spaces and wider areas to fashion chances against a back three that made it difficult to create and score centrally. But while they demonstrated patience, they appeared to lack invention, with limited movement ahead of the ball and lots of futile horizontal possession. This did help them to maintain some control of the game, but it offered little in the way of creating chances.

As Sevilla chased the game, Barca found themselves operating deeper and with more caution without the ball – this in turn leant itself to counter-attacking opportunities. Upon a regain, they would look to find Dembele, who would either go directly at his man or use the supporting runners to pass across the pitch and finish the attack on the other side. These counter-attacks created some opportunities for the hosts to extend the scoreline, which they duly did in the second half.

Out of possession, Barca used two systems: they would either press Sevilla high in their usual 4-3-3 structure and try to force them into mistakes, or they would sit deeper in a 4-1-4-1/4-5-1 mid-block and wait for a pressing trigger or their opponents to give the ball away. When pressing high, they struggled to regain possession against a Sevilla team that had control of the wide areas and found it relatively easy to break the hosts’ initial press.

They were most effective in their mid-block, where Busquets had an important role in screening the ball into Wissam Ben Yedder or Andre Silva while simultaneously being in a position to press Ever Banega or whoever was central at that given moment. The line of engagement was just beyond the halfway line, but it remained a cautious press, as they looked to cover the width of the field using five midfielders in an attempt to nullify the wide threat. They would try to prevent forward play and would only initiate a press if a Sevilla player received the ball facing their own goal – when the ball was then played backwards, the press would continue.

Sevilla set up in a 3-5-2 in possession, with Jesus Navas and Guilherme Arana providing the width from wing-backs. Ever Banega, Pablo Sarabia and Franco Vazquez played as the inside midfielders, while Wissam Ben Yedder and Andre Silva led the attack.

Pablo Machin’s team displayed a clear strategy to exploit the wide areas when in possession – and key to this was timing. The 3-5-2 system often has a natural advantage in these areas over the 4-3-3, but Sevilla wanted to push it further. Instead of looking to play out wide as the first port of call, they would play a vertical pass through to their midfielders in a central area in an attempt to bring Barcelona into a more compact shape. The vertical pass was the trigger for Navas and Arana to push forwards, and the midfielders would try to play out to them with a maximum of two touches. As Silva and Ben Yedder often played close together, they would be in a good position to attack the box, while the central midfielders could also then join with late runs.

Towards the latter stages of the game, they delivered more crosses into the box and created several chances from this strategy. They occasionally abandoned the idea of playing centrally first before moving out wide, and would try to get the ball out quicker for an earlier cross. The bombardment of balls into the box was difficult for Barca to deal with, as they seemed somewhat panicky in clearing their lines. Sevilla might have been rewarded had they attacked in this way from an earlier stage of the game.

The visitors used a 5-3-2 formation out of possession, with Navas and Arana dropping into the back line of five alongside Daniel Carrico, Simon Kjaer and Sergio Gomez. When the ball was on the right-hand side, Navas would press Jordi Alba when he had possession, leaving Carrico to cover Philippe Coutinho with the help of Kjaer. Gomez offered the same protection in covering Luis Suarez, while Arana would tuck in and look to affect Lionel Messi, should the ball transfer in one pass.

On the left-hand side, it would be left central midfielder Vazquez who would press Nelson Semedo rather than Arana. Arana would stay back in his line of five to avoid the possibility of Gomez being left one-on-one with Messi. When Messi dropped, Arana and Gomez would step up to create a two-on-one.

Sevilla unsurprisingly abandoned this play once Messi was substituted, as they were seemingly confident Gomez could handle a one-on-one situation with Ousmane Dembele, allowing Arana to then press Semedo. Operating in a back three also allowed Kjaer to step up with Suarez when the centre forward looked to drop deeper – provided that Gomez and Carrico tucked in to maintain central compactness.

Sevilla set out to press Barca high from goalkeeper Marc-Andre ter Stegen’s possession, functioning in what was effectively a man-for-man structure. The back three would match up against the hosts’ front thre; while it was a risk to leave an enormous space between the midfield and defensive lines, it was an effective strategy in making it more difficult for Barca to play out from the back.