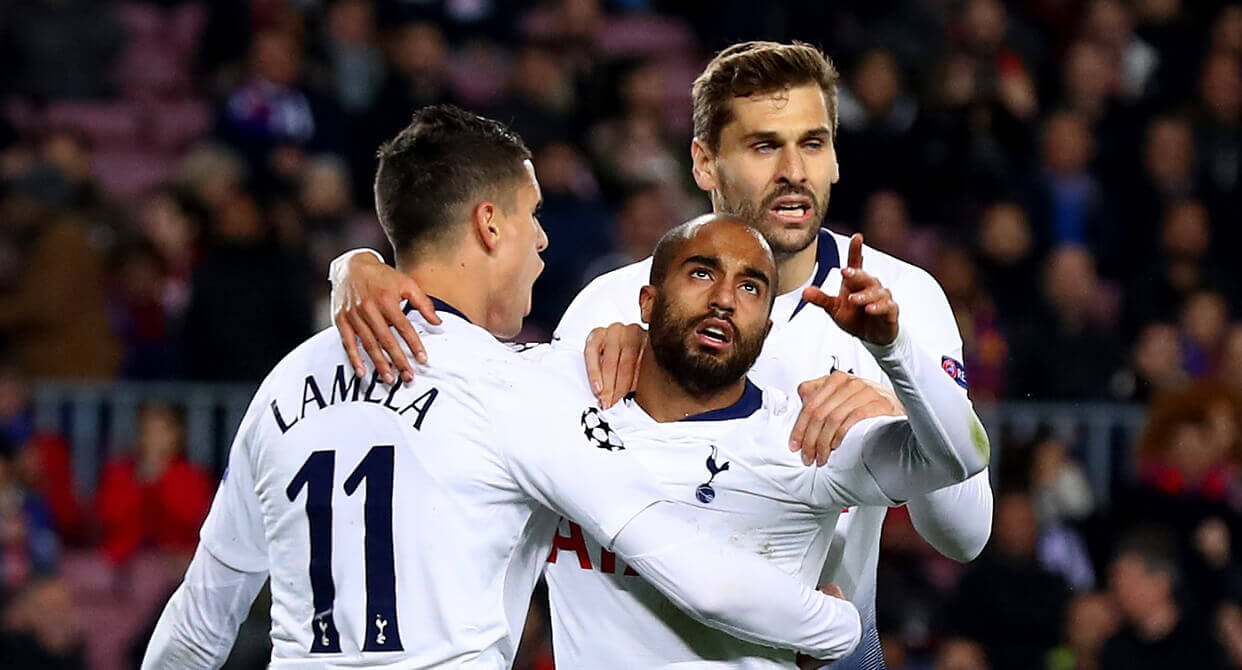 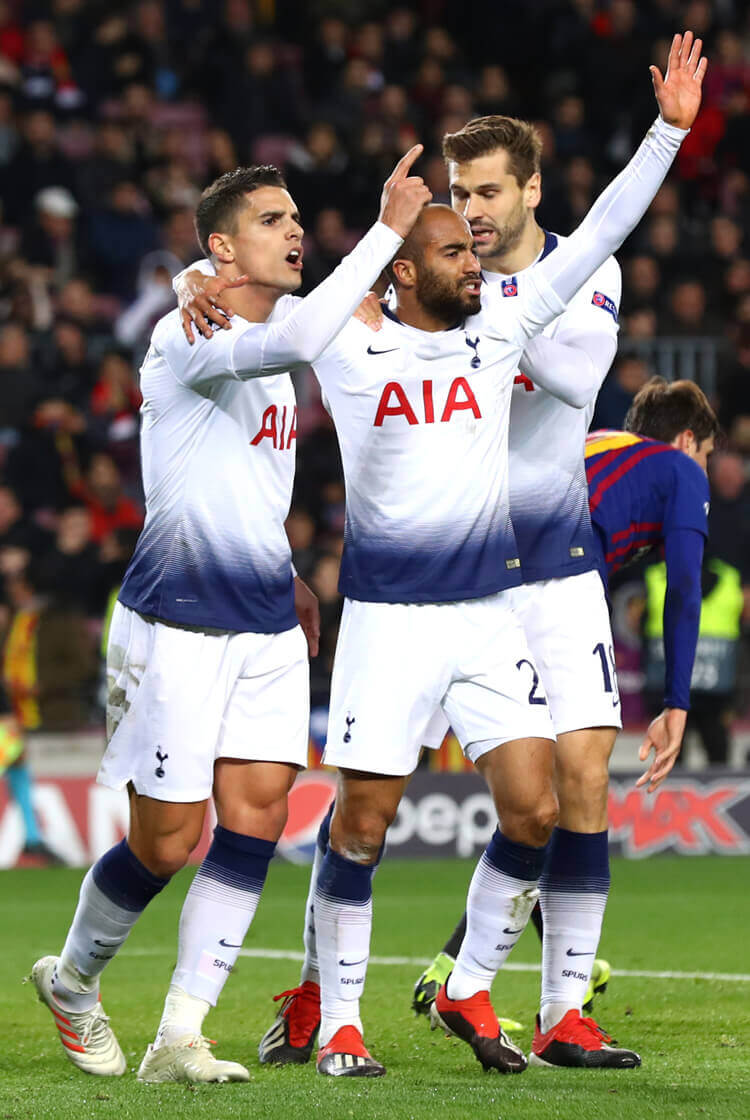 It wasn’t easy, and they left it late, but Tottenham secured their spot in the last 16 of the Champions League with a well-deserved point in the Camp Nou. With top spot in the group already guaranteed, Barcelona head coach Ernesto Valverde looked to have done Mauricio Pochettino a favour by leaving Lionel Messi and a host of first-teamers out of his starting XI – but an early strike from Ousmane Dembele left Spurs with an apparent mountain to climb. Son Heung-min and Harry Kane both missed great chances to draw the visitors level, while Philippe Coutinho hit the post in both halves. In the end, it was substitute Lucas Moura who found the back of the net, sweeping home from a Kane cross after a superb team move. With Inter Milan failing to beat PSV at the San Siro, a point was enough to see Spurs through. 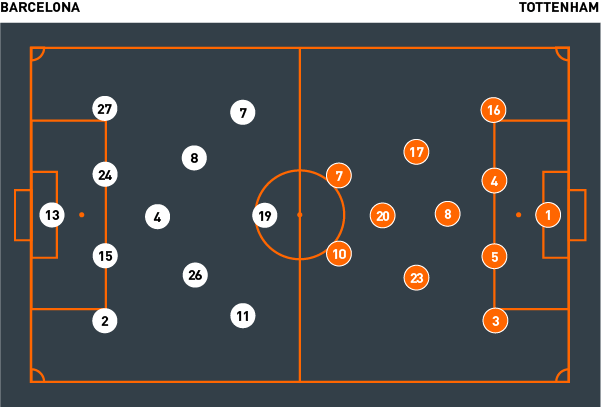 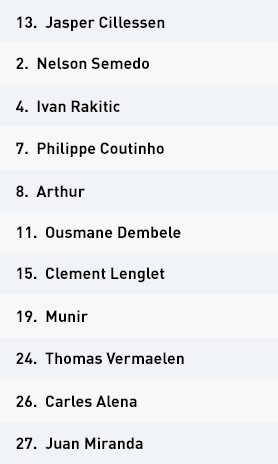 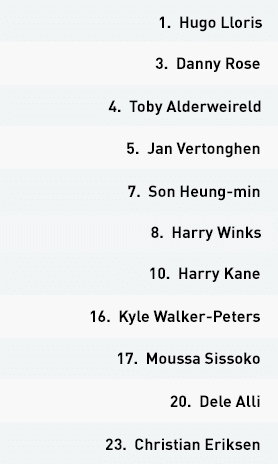 Having already secured top spot in the group, Barcelona head coach Ernesto Valverde rested a number of star names, including Lionel Messi. The team continued in its 4-3-3 structure, with full-backs Nelson Semedo and Juan Miranda a key outlet during their build. Neither were required as Ousmane Dembele struck Barca into an early lead, however.

Avoiding Tottenham’s central diamond – and overload – was the priority for the hosts. In order to simultaneously push both full-backs forward, Arthur joined Ivan Rakitic in dropping deep within the back line, providing more security should they lose possession within midfield. Chipped passes over Tottenham’s full-backs repeatedly found both Miranda and Semedo in behind; they then looked for low crosses for lone striker Munir to attack in behind the Spurs defence, or cut-backs for Philippe Coutinho coming in from the left.

As the half progressed, Coutinho became more of a central presence, which helped the home side gain more control in the centre – particularly as the Tottenham diamond was proving difficult to penetrate. This also allowed Miranda to become a more permanent attacking threat down the left flank, as the hosts tried to isolate the already booked Kyle Walker-Peters.

Although the home side remained in front, they created little else in a first half Tottenham largely dominated. Individual brilliance from the likes of Arthur or Coutinho did at times progress the ball into the final third – the latter clipping the outside of the post with a shot from nowhere – but on the whole they had little to show for their lead.

Rakitic was replaced by Sergio Busquets at half-time, as the hosts tried to regain control in the middle of the park. This worked to a point, but Barca continued to be pegged back by strong Tottenham pressure – it was no surprise when Valverde called in the cavalry and introduced Messi for the final 30 minutes. He was unable to inspire any further score from his side, however, as they continued to build with short passes from deep rather than counter-attacking at pace against a Spurs team pressing hard for an equaliser.

Without the ball, the home side formed a mid-block structure, rarely committing to a high press in the first half. Rakitic was the single pivot; he protected the central space between defence and midfield, while both Dembele and Coutinho were forced to recover back against attacking opposition full-backs.

Dele Alli’s varied and unpredictable movements either horizontally to support the ball, or vertically to support passes into Harry Kane, caused Rakitic constant issues. If these forward runs were directed away from the central lane, the Croatian was uncomfortable following the England midfielder and leaving a huge central gap. If he left Alli to his own devices, then Spurs could create a two-on-one against Barcelona’s back line. This became a recurring issue in the first half – Son Heung-min should have levelled after Rakitic was once more dragged away by Alli.

Arthur moved back into a deeper position to form a double pivot against Alli’s runs while blocking off access into Kane or Son. From here, Tottenham’s possession increased as Barcelona had fewer players pressing the ball in advanced positions – but the hosts were much more stable in their own half.

A higher defensive line in the second half ensured Tottenham had much less room to sustain possession in the midfield third. However, with more space in behind, the away side looked to more direct passes and runs into the enhanced spaces, with Barcelona unable to block play around the sides of their block. This did make the second half a little more open, as the hosts in turn had more space to exploit in behind the increasing number of midfield runners Spurs sent ahead of the ball.

Tottenham head coach Mauricio Pochettino made the brave decision of starting with two central strikers: Harry Kane and Son Heung-min. This gave the visitors an extra target to find during moments of transition, and also meant Barcelona would have to adapt their attacking rotations to leave a third player back to cover. This also gave Spurs extra support around Kane, should they look to direct balls into the powerful forward.

To their credit, the visitors regularly committed bodies forward to support Kane, with Dele Alli joining Son as a second supporting runner. This left Harry Winks to cover the central lane and switch the play, with Christian Eriksen and Moussa Sissoko supporting from the inside channels. This midfield diamond enabled the hosts to build away from Barcelona’s central midfield trio, with the full-backs eventually joining to offer attacking width.

Alli’s constantly evolving position gave the hosts – and Ivan Rakitic in particular – major issues. His movements in behind gave Tottenham extra penetration if they were unable to build through or around Barcelona’s mid-block, and his runs across the pitch created vertical passing lanes into Kane and Son. The latter should have equalised after Rakitic failed to block an obvious through ball – it was the only real time in the first half Spurs carved the hosts open, but Son was unable to beat Jasper Cillessen.

The visitors continued to create chances in the second half, as more direct runs in behind from Kane stretched Barcelona’s back line. His clever hold-up play, coupled with delicate sets and lay-offs, enabled the likes of Alli and Eriksen to receive the ball higher up the pitch and via moves involving fewer passes. Both Sissoko and then Alli took up wider positions to help stretch Barcelona’s back line, as Eriksen constantly looked to thread balls through.

In the end, Tottenham got their deserved reward as substitute Lucas Moura grabbed a late equaliser, only moments after missing a close-range header. Kane’s movement out to the left created extra space for central runners, and his low cross found Moura free to power home. Spurs held on, and with a little help from PSV Eindhoven, they secured a passage into the last 16 that had looked unlikely after picking up only one point from their first three group games.


As the game settled after Barcelona’s early goal, the visitors utilised a 4-3-1-2 defensive structure, often leaving players high to help quickly transition into attack. With this shape, Tottenham looked to maintain an overload against Barcelona’s central midfield trio. From here, the visitors encouraged play into the wide areas, as they knew the home side would pose a reduced threat from attacking crosses.

Spurs’ dominance of the ball ensured their mid-block was used much less than may have been predicted, especially after conceding so early. Despite trailing for a considerable amount of time, the visitors were always wary of a killer second. Although Alli was the main attacking midfielder, both Sissoko and Eriksen supported the attack from a central position, particularly if Alli had made a run out wide. From here, Spurs maintained their offensive shape but were always aware of the defensive implications should they lose possession. This was clearly working, as the hosts created few effective counter-attacks from inside their own half.

In the second half, Spurs were forced to change their attacking set-up to counter defensive changes in the hosts’ back line. From here, they eventually lost defensive stability when attacking, as Alli and Sissoko’s wider positioning only left Winks and Eriksen to cover the central lane when possession was lost. Even though Barcelona didn’t make use of fast counter-attacks, they were able to maintain longer periods of possession. This contributed to longer spells without the ball for the visitors, meaning they couldn’t regain the ball as high and often as they did in the first period – not that they will have cared much once securing the point they needed to qualify.