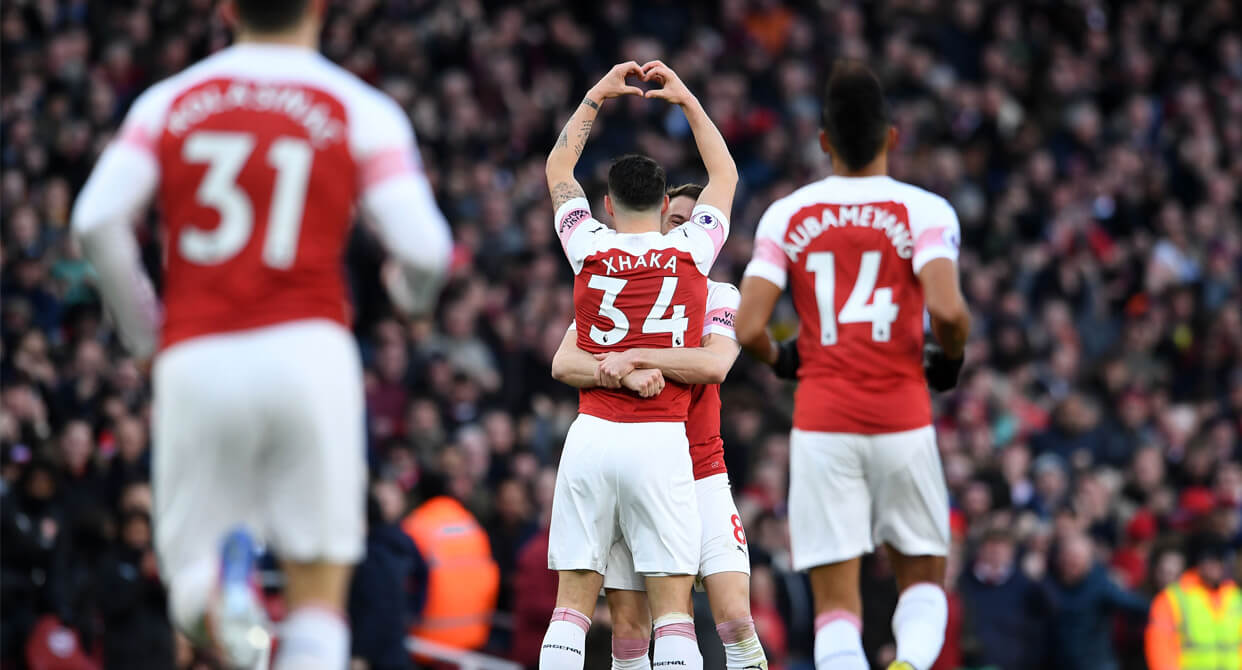 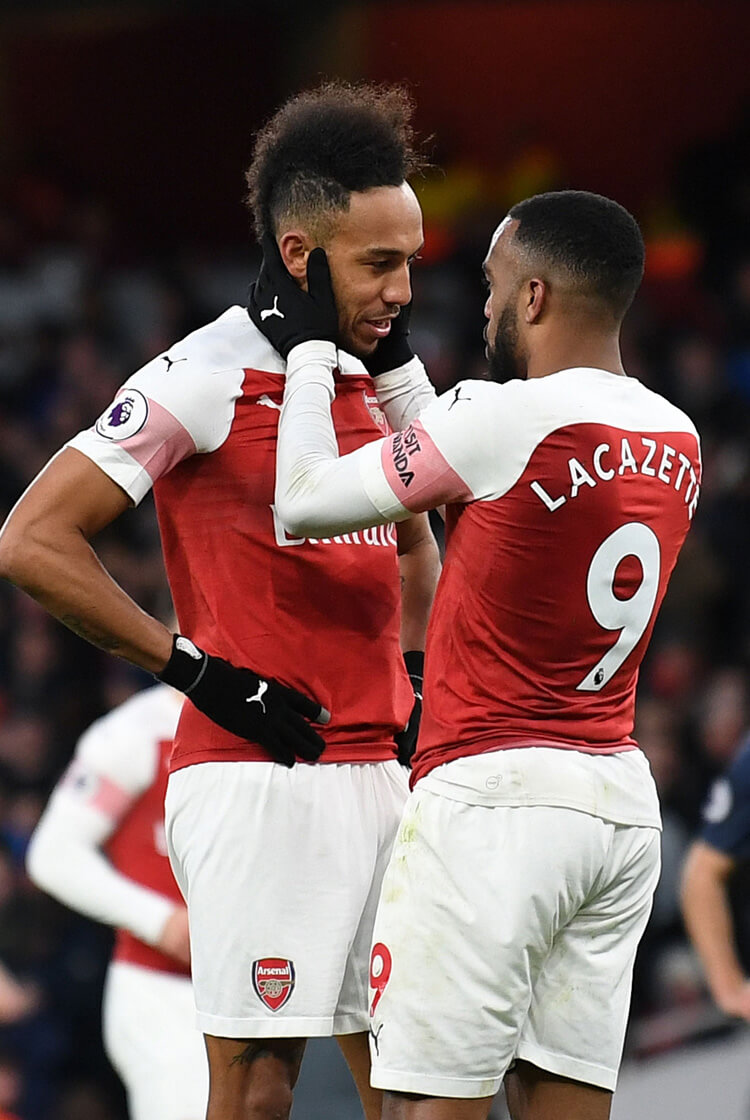 Ole Gunnar Solskjaer suffered his first Premier League defeat as interim manager of Manchester United, allowing Arsenal to move past his side and into the top four. Three days after suffering Europa League defeat in Rennes, Unai Emery opted for an attacking line up featuring both Mesut Ozil and Aaron Ramsey for the first time since September and the striking duo of Alexandre Lacazette and Pierre-Emerick Aubameyang. It was United who first went closest to opening the scoring though, only the crossbar preventing Romelu Lukaku from scoring his seventh goal in four games.

Shortly afterwards, Granit Xhaka hit a swerving shot from outside the penalty area that appeared to wrong-foot David de Gea in the United goal, giving him a fourth goal of the season. United's luck appeared to be further out when, seven minutes later, Fred's low shot from outside the area came off the outside of the post and Lukaku was later thwarted again, this time by the outstretched arm of Bernd Leno.

The German came to Arsenal's rescue again, early in the second half and it took until the hour mark for the hosts to start to look a threat once again. The award of a penalty in the 69th minute for what seemed to be marginal contact on Lacazette from United midfielder Fred gave Aubameyang the opportunity to atone for his miss in the north London derby a week earlier, and the Arsenal striker grabbed it, scoring his 17th league goal of the season. After the midweek high of ousting Paris Saint-Germain in the Champions League, this result ensured United were hit with the reality that the battle for a top four finish will not be easily won. 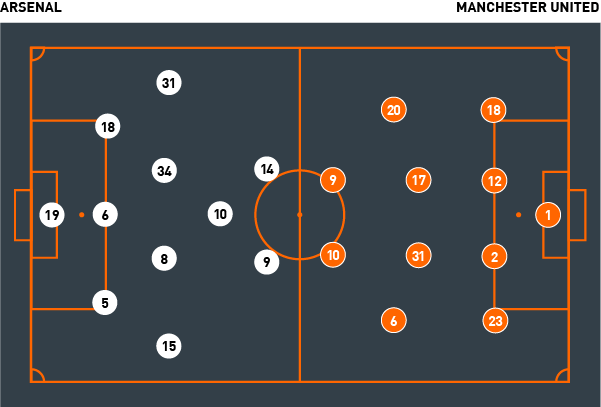 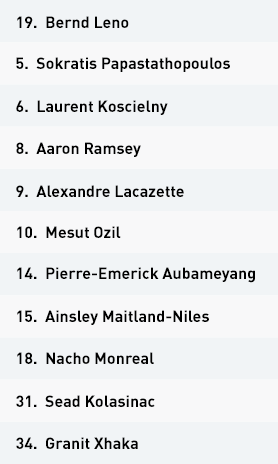 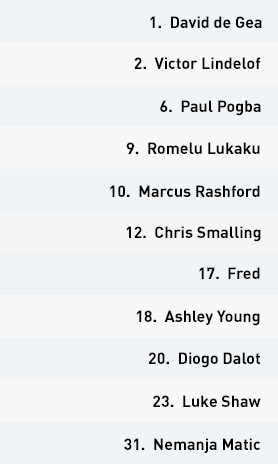 Arsenal set up in a 3-4-1-2 formation when in possession, with attacking width provided by their wingbacks - Ainsley Maitland-Niles and Sead Kolašinac. The hosts comfortably built from defence into midfield, as their central back three easily bypassed Manchester United’s two strikers. From here, the two wider defenders stepped forward, and either found their corresponding wingback - to attack around the visitors' midfield - or used disguised central passes into Aaron Ramsey or Özil between the lines.

The home side took the lead as Granit Xhaka’s shot from distance completely wrong-footed David De Gea. Arsenal continued to work the ball forward, as United tried to block off access into the hosts' wingbacks. Arsenal then looked for central combinations, with Özil now dropping into a much deeper position. Although this reduced the presence between United’s lines, Alexandre Lacazette and Pierre-Emerick Aubameyang soon moved in-between the visitors full-backs and centre-backs. This opened up direct passes in behind, and also stopped United pushing a defender forward to re-balance the midfield. This bigger central space encouraged more forward runs from Arsenal's central midfield unit - helping attack during moments of transition.

With Arsenal’s wingbacks moving into a deeper position as the first half progressed, Arsenal’s attacking play lacked immediate width. Arsenal’s deeper structure both with and without the ball actually helped United, as they pushed Luke Shaw further forward, with minimal fear of being exploited in the wider areas. Shaw’s movements forward set off a chain reaction of rotations, which ended with extra forward runs from United's central midfield. This dragged Özil deeper, thus reducing the link between defence and counter-attack once more.

Arsenal’s lack of attacking play moved into the second period, as their back line searched for more direct forward passes. Lacazette and Aubameyang were charged with holding and delaying the play, in order for Özil and Ramsey to support from central midfield. Arsenal rarely pushed their wingbacks ahead of the ball in an overlapping style - likely conscious of the potential damage United’s split-strikers could have on the break. This second-half attacking strategy did unleash Ramsey’s forward runs, as he offered continuous forward passes, should Lacazette or Aubameyang link with Özil first.

When defending, the home side initially kept both wingbacks higher, as their central defensive trio were comfortable against United’s two central strikers. From here, their intense pressing to force the ball into the visitors' full-backs often resulted in turnovers of possession early on. They outnumbered the visitors in midfield, with Özil working back to press United’s central midfield duo from behind.

Unable to maintain the press, Ainsley Maitland-Niles and Sead Kolašinac soon dropped into the back line, with Arsenal now forming a back five. Ramsey and Xhaka protected the central lane, with Özil occupying spaces around United's central midfield. Despite more players behind the ball, Arsenal looked more vulnerable than ever. Late forward runs from United’s central midfield often went untracked, as spaces between Arsenal’s lines were exploited.

Dropping movements from either Romelu Lukaku or Marcus Rashford dragged an Arsenal centre-back forward, creating holes within Arsenal’s back line. United’s attacks were well-worked, in the sense that their final attempt on goal usually stemmed from the same side the Arsenal centre-back had vacated. This pattern continued in the second half, with Rashford continuing to receive after moving away from Arsenal’s back line, and Lukaku moving in behind. Fortunately for the home side, their compactness in defence nullified most of the visitors' attacking play, with Lacazette eventually drawing a penalty to provide a two goal cushion, as the hosts saw out the game.

Manchester United utilised an asymmetrical 4-4-2 when attacking Arsenal’s back line (meaning the roles on on one side were different to the other i.e. Dalot played right midfield but moved forward, whereas Pogba played left midfield but moved inside), with Rashford and Lukaku providing the attacking height as a central striking pair. With Pogba moving inside, Nemanja Matic and Fred formed a central double pivot in midfield - often remaining behind the ball. Luke Shaw and Diogo Dalot provided the first instance of attacking width, with their first attack of the game resulting in Lukaku hitting the crossbar from Shaw’s cross.

United struck the woodwork once more, with Fred’s low drive clipping the outside of the post. But as Arsenal dropped more players behind the ball, United struggled to penetrate the congested block. One of Rashford or Lukaku moved with Pogba towards the ball whenever Arsenal set up in a mid-block structure, which created a central 4 v 3 - with Fred and Matic constantly overloaded previously. However, United then lacked an attacking presence against Arsenal’s back line, as they had Shaw and Dalot as two of the highest attackers - both of whom are full-backs first, attackers second.

To address this, United moved to a single pivot when attacking. As Rashford continued to drop and link the play, third-man patterns often found Fred behind Arsenal’s midfield, with Arsenal's central midfield unit inattentive to these movements. This pattern helped create the final major chance of the first half, as Lukaku was then played in behind, after Fred’s clever drive and release of pass.

Due to Arsenal’s deeper defensive structure in the second half, Lukaku was often battling against multiple central defenders - especially as Rashford continued to drift away from Arsenal’s back line. Although Rashford’s movements allowed for repeated build-up deep in Arsenal’s half, the final penetration became tougher, with Arsenal’s back line and double pivot incredibly compact. Pogba soon joined Lukaku in behind, giving United two runners in-between Arsenal’s central defence. However this led to more Arsenal counter-attacks - even without their wide support.

Without the ball, United preferred a 4-4-2 mid-block structure, as Rashford and Lukaku could do little to stop Arsenal’s back line working the ball forward. Whenever Pogba was lured out to press Arsenal’s back line, Shaw was more exposed and had to step forward. From here, forward runs from Lacazette helped penetrate in behind, as Arsenal searched for runners with low crosses. Should Pogba remain deeper - and thus block the wider pass - Arsenal attacked the central lane, with Özil dropping towards the ball to overload Fred and Matic.

With Shaw moving higher, Arsenal’s wingbacks gradually dropped deeper. This was then enhanced by Fred’s forward runs and Rashford’s movements away from Arsenal's back line, meaning Arsenal could no longer effectively attack through transitions (due to the lack of attacking width upon a regain). From here, United’s block moved higher, resulting in a more dominant display of attacking football. This continued well into the second half, as Arsenal searched for longer forward passes into their two central forwards.

After Arsenal’s second goal, United's possession become loose. They finished in a 4-3-3, with Rashford on the left and Anthony Martial introduced on the right side. However this hindered Rashford’s ability to drop into central spaces, and allow for further rotations around the ball, leaving United unable to create any further chances of note.