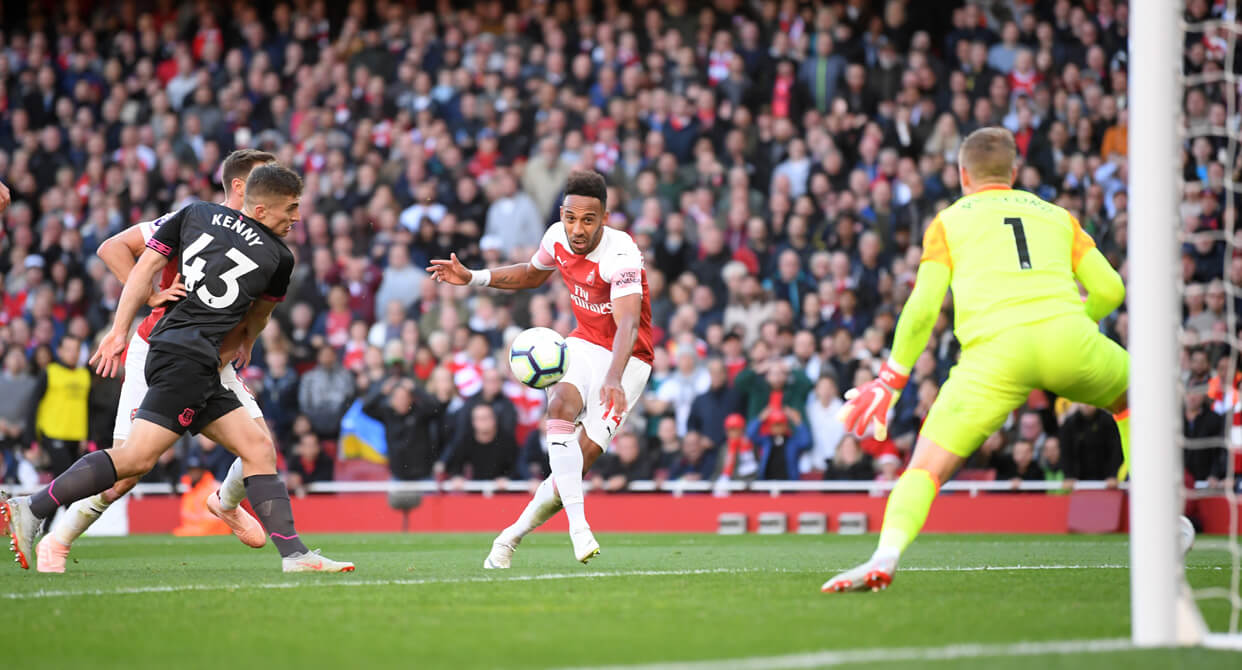 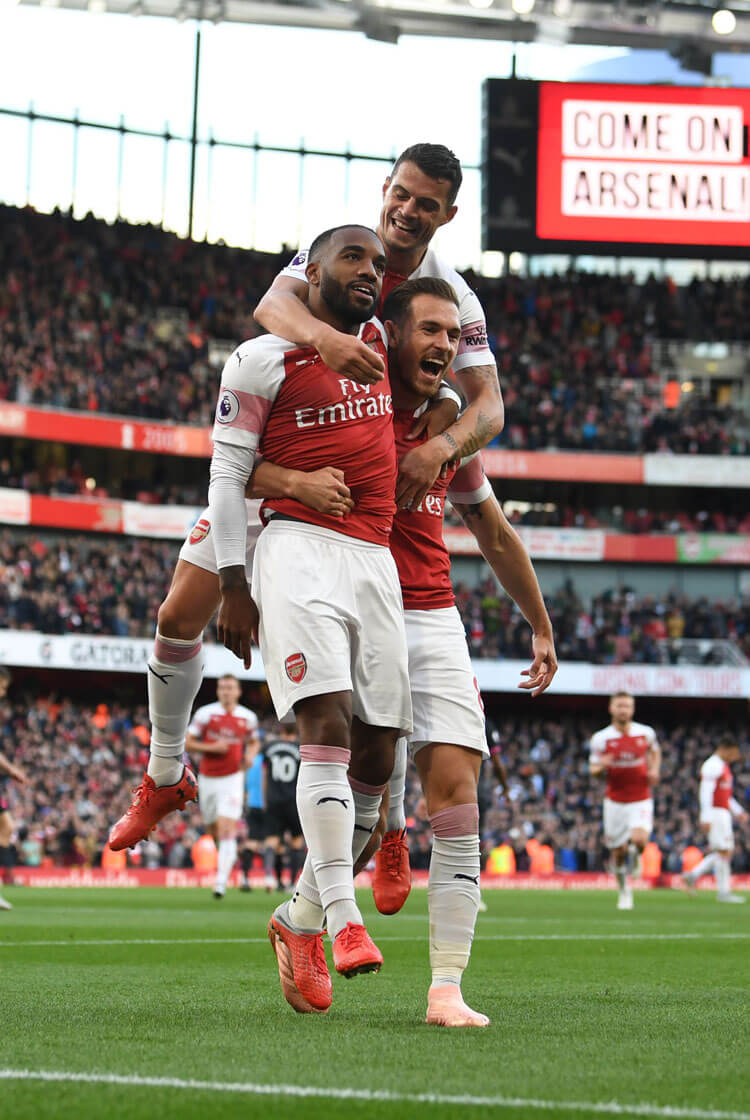 Arsenal rose to sixth in the Premier League with victory over Everton at the Emirates – their fourth successive win in the competition. Dominic Calvert-Lewin’s wasting of an excellent opportunity to give the Toffees the lead soon after kick-off was a sign of what would be a frustrating afternoon for the visitors. Following a difficult opening period, the Gunners increased the tempo and Alexandre Lacazette eventually broke the deadlock with an exquisite curling effort from inside the penalty area in the 56th minute. Pierre-Emerick Aubameyang doubled their advantage moments later with a finish from close range – although Everton were right to have felt aggrieved by this goal, with replays showing him to be in an offside position. Arsenal are gathering winning momentum, as they continue their fine run of form since suffering defeats to Manchester City and Chelsea in their opening two games of the season. 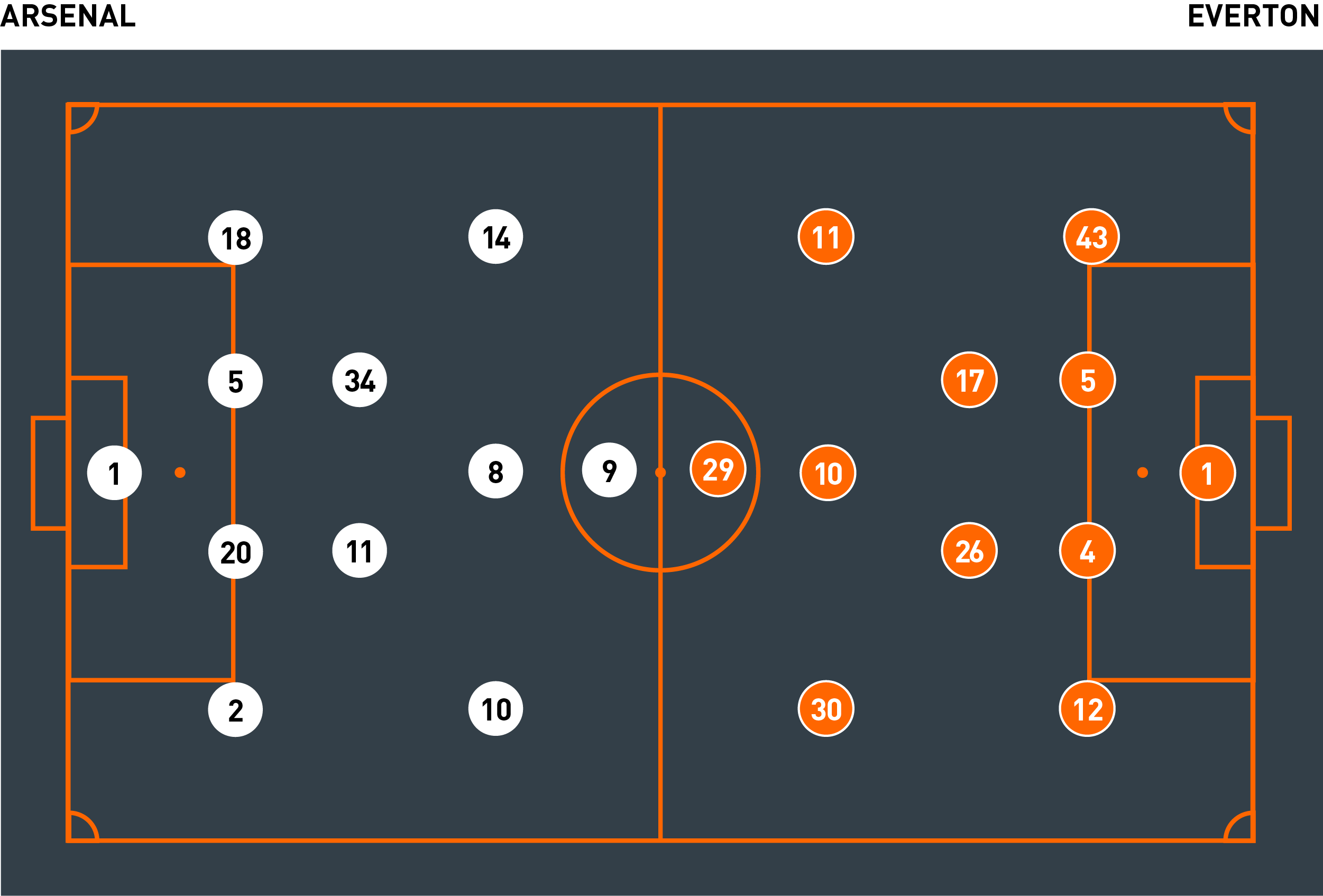 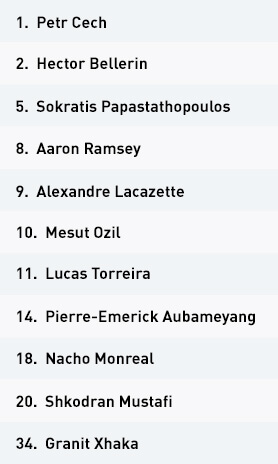 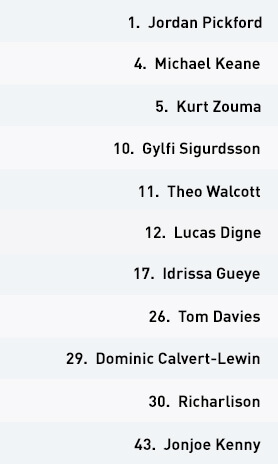 Unai Emery brought summer recruit Lucas Torreira in for his first Premier League start of the season, as central midfielder Matteo Guendouzi dropped to the bench. Arsenal continued in a 4-2-3-1 structure, with Aaron Ramsey in the number 10 role, and Mesut Ozil and Pierre-Emerick Aubameyang providing support out wide. Alexandre Lacazette led the attack.

The Gunners remained loyal to their approach of building out from the back, but loose passing from Granit Xhaka in the early stages of the match invited unnecessary pressure on to his back line. With central defenders Shkodran Mustafi and Sokratis Papastathopoulos splitting along the sides of the penalty area and Torreira moving higher in line with the advancing full-backs, Xhaka offered the closest option in the central lane. Ozil would move inside during their deep build, finding space to receive and attack from a central position – but a lack of splitting forward passes meant the German’s inside movements were not hugely effective.

They did eventually take control of possession and their first opening came through a wonderfully slick passing move, when Ramsey dropped between Xhaka and Torreira before the ball was worked to Hector Bellerin for a first-time cross into the box. Despite making inroads with the ball against a narrow 4-4-2 structure, they were vulnerable during the transition into defence. Xhaka and Torreira would be pulled back into the centre, leaving Everton’s speedy wide players free.

Arsenal’s possession lost its rhythm towards the end of the first half, as the visitors’ condensed structure proved difficult for the rotating midfield to play through. They continued to build from the back, but inaccurate passes into midfield resulted in limited success. Everton inevitably regained possession with relative ease and promptly attacked the magnified spaces between Monreal and Papastathopoulos, who was forced off through injury and replaced by Rob Holding towards the end of the first half.

The hosts required more urgency if they were to break the deadlock, and the midfield increased their movements in behind the defence in the opening moments of the second half. The deeper midfielders, Xhaka and Torreira, could now loft balls over their opponents’ defence and penetrate the back line. Everton’s back four started to drop a few yards deeper when the hosts possessed the ball in the midfield third – this created more space in between the lines, as the visitors’ midfield bank of four failed to mirror their defence’s dropping movement.

Despite the increase in space between the lines, progressing the ball past the first line of pressure proved challenging. With the Toffees stepping high and on to the double pivot of Xhaka and Torreira, the hosts’ back line was forced to play straight passes into the full-backs, who were squeezed against the touchline. Recovering possession was then straightforward for Everton, allowing for quick counter-attacks to be launched.

After Everton’s spell of high-pressing faded, they dropped into a mid-block – this enabled Arsenal to build far more comfortably into the middle third. Movements behind continued to stretch the gap between the defence and midfield, as the space for Ozil and Ramsey to link the play grew. A patient pattern of short passing in midfield led to Lacazette giving Arsenal the lead with a sumptuous curling effort into the top corner.

The lead was quickly doubled, with more direct play from the back line helping the ball to be worked into Lacazette. A mistake from centre-back Kurt Zouma resulted in Ozil again being found in behind, and the German unselfishly squared the ball for Aubameyang to tap home, via a deft flick from Ramsey – although replays showed the goalscorer to be in an offside position. The goals calmed both crowd and players, who now looked far more relaxed in possession.

Everton looked to hit back immediately and became more direct in their approach, sending early long balls to Dominic Calvert-Lewin – but with the young forward challenging Holding and Mustafi in the air, the hosts’ back line could easily recover the ball. Even if he did win the ball, Xhaka and Torreira would be close by to apply immediate pressure on the second ball.

The fresh legs of substitutes Alex Iwobi and Danny Welbeck later ensured Arsenal could continue to run in behind their opponents’ tiring back line. With the Toffees’ defence retreating, the midfield were once more afforded more space in the midfield third, where they could maintain possession and strategically take the sting out of the game. Emery’s players were largely untroubled for the remainder of the contest, comfortably running down the clock to earn a fourth consecutive league victory and a first clean sheet of the season.

Everton looked to avoid back-to-back Premier League defeats following their home loss to West Ham. Head coach Marco Silva made three changes, with Mason Holgate, Morgan Schneiderlin and Cenk Tosun dropping to the bench. The trio were replaced by Michael Keane, Tom Davies and Richarlison in a 4-2-3-1 system that matched their opponents.

The Toffees started on the front foot and should have gone ahead in the opening minutes. Davies’ incisive through ball split the Arsenal lines, with lone striker Dominic Calvert-Lewin free between the left-back and left centre-back. Despite running in on goal, his attempt to round Petr Cech was foiled by the experienced goalkeeper.

They converted into a 4-4-2 when defending, with Gylfi Sigurdsson moving higher to form a front two with Calvert-Lewin. Their position-oriented structure protected the central lane, as their midfield and defensive units of four looked to leave minimal spaces between their lines. They soon relinquished control of possession after a quick start and prioritised attacking during moments of transition. Utilising the speed of Theo Walcott and Richarlison proved an effective method in quickly transitioning from their opponents’ half.

Granit Xhaka and Lucas Torreira were tasked with covering their own full-backs when Arsenal were building, taking up positions within the inside channel that resulted in the forming of a makeshift back four. Everton, though, were smart in luring the central midfield pair out of their covering positions by counter-attacking with dribbles through the attacking lane – this drew Xhaka and Torreira away from the inside channels, where Walcott and Richarlison could then surge forward unmarked. This proved their main attacking threat, as the gaps between Arsenal’s full-backs and central defenders was enlarged due to expansive build-up play.

The Gunners became more direct in their approach in the second half, stepping up their efforts to penetrate. Everton started well too, notably pressing the hosts’ double pivot to successfully disturb their deep build. A lack of quality splitting passes during this build ensured Everton could frequently regain possession within their attacking half; this not only created chances for themselves, but also reduced the frequency of the home side’s attacks, allowing the back line to reorganise.

They eventually retreated into a mid-block, allowing Arsenal to build to the halfway line. Movements in behind stretched their defence, as pockets within midfield also increased in size. The home side took the lead after Lacazette ended a lengthy pattern of play for the home side with a superb curling strike, before the visitors’ misery was compounded with a quickfire albeit offside second minutes later.

The reaction from Everton was to utilise more direct balls forward, as they looked for Calvert-Lewin to hold up passes from deep and link the play with Sigurdsson in the central lane. Against both central defenders and a double pivot, Calvert-Lewin struggled to win the first contact. Supporting runners were also out of their compact structure when Arsenal regained possession, making the task of recovering the ball for additional attacks increasingly difficult.

The positioning of Arsenal’s double pivot reduced the central spaces for Sigurdsson to combine, too. Xhaka and Torreira remained incredibly tight with the central defenders, providing minimal space between the lines. Instead, Everton opted to direct the ball out towards their left side for the late forward runs of left-back Lucas Digne, who provided first-time crosses to penetrate the penalty area. Similarly, the front line struggled to attack these crosses against an aerially dominant defence.

The crosses from the left faded, despite the introduction of Cenk Tosun. Digne’s forward runs were reduced, as he remained with the back line, passing the responsibility on to Richarlison and substitute Bernard from the right. While they now had Tosun to attack deliveries into the box, they lacked supporting numbers, as the wingers – who previously moved inside to assist the lone striker – were now unavailable to pull defenders away. The visitors were unable to grab a consolation goal, falling to a second consecutive Premier League defeat and remaining without a win in four.